I recently purchased a publication by Fine Cooking called Delicious Italian Desserts, which features sweets and pastries from Italy's Academia Barilla. One of their recipes, "Torta ai frutti di bosco," really caught my eye because it had all of my favorite ingredients when it comes to dessert: fresh pastry cream, a buttery short crust, light sponge cake, more pastry cream, fresh berries galore (strawberries, blueberries, raspberries, blackberries - whatever's in season), and fresh whipped cream for garnish. My taste buds were totally lit so I just had to give this one a try. Alas, since this was my first attempt at this recipe, it turned into an exercise of trial and error. 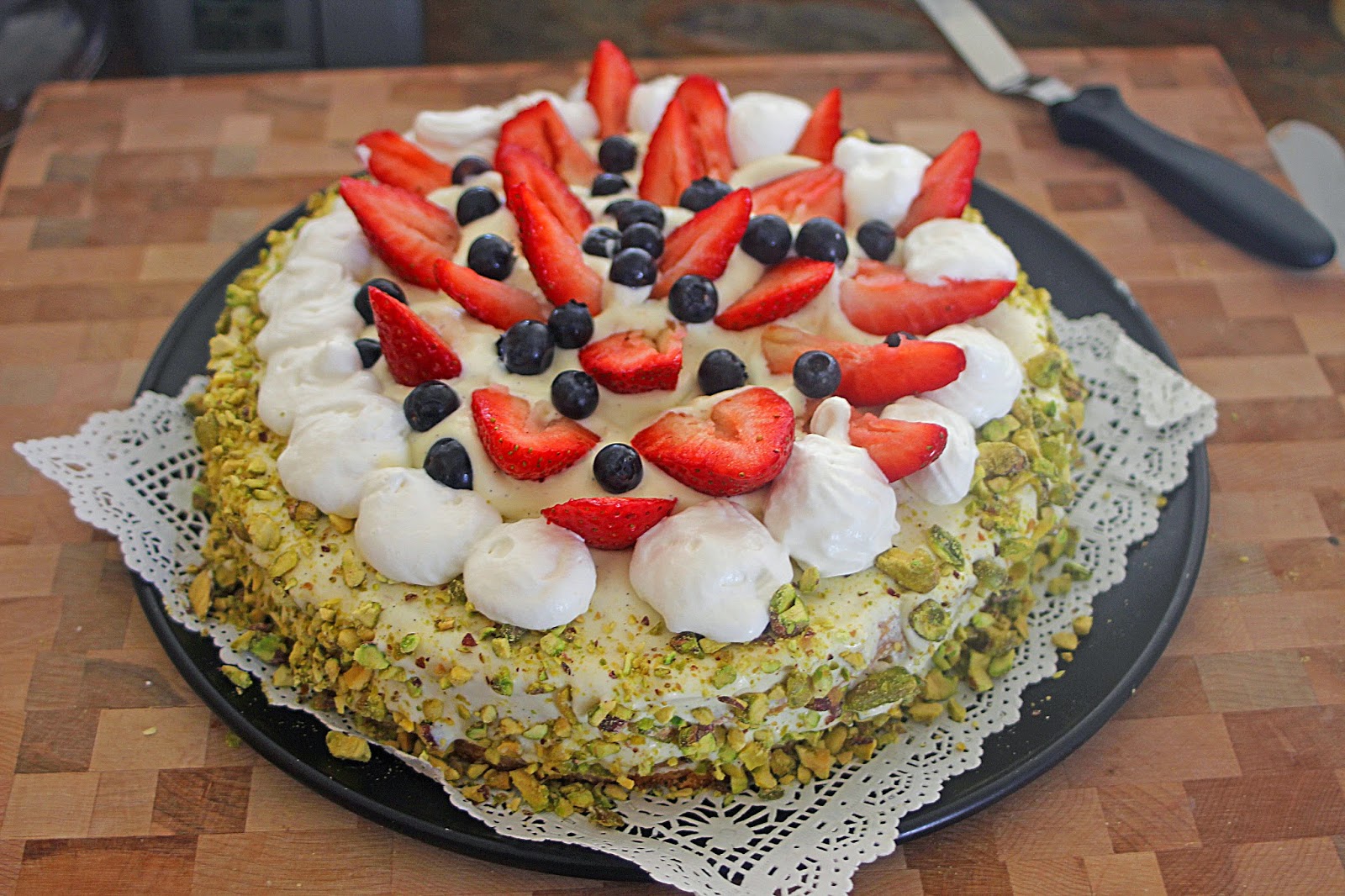 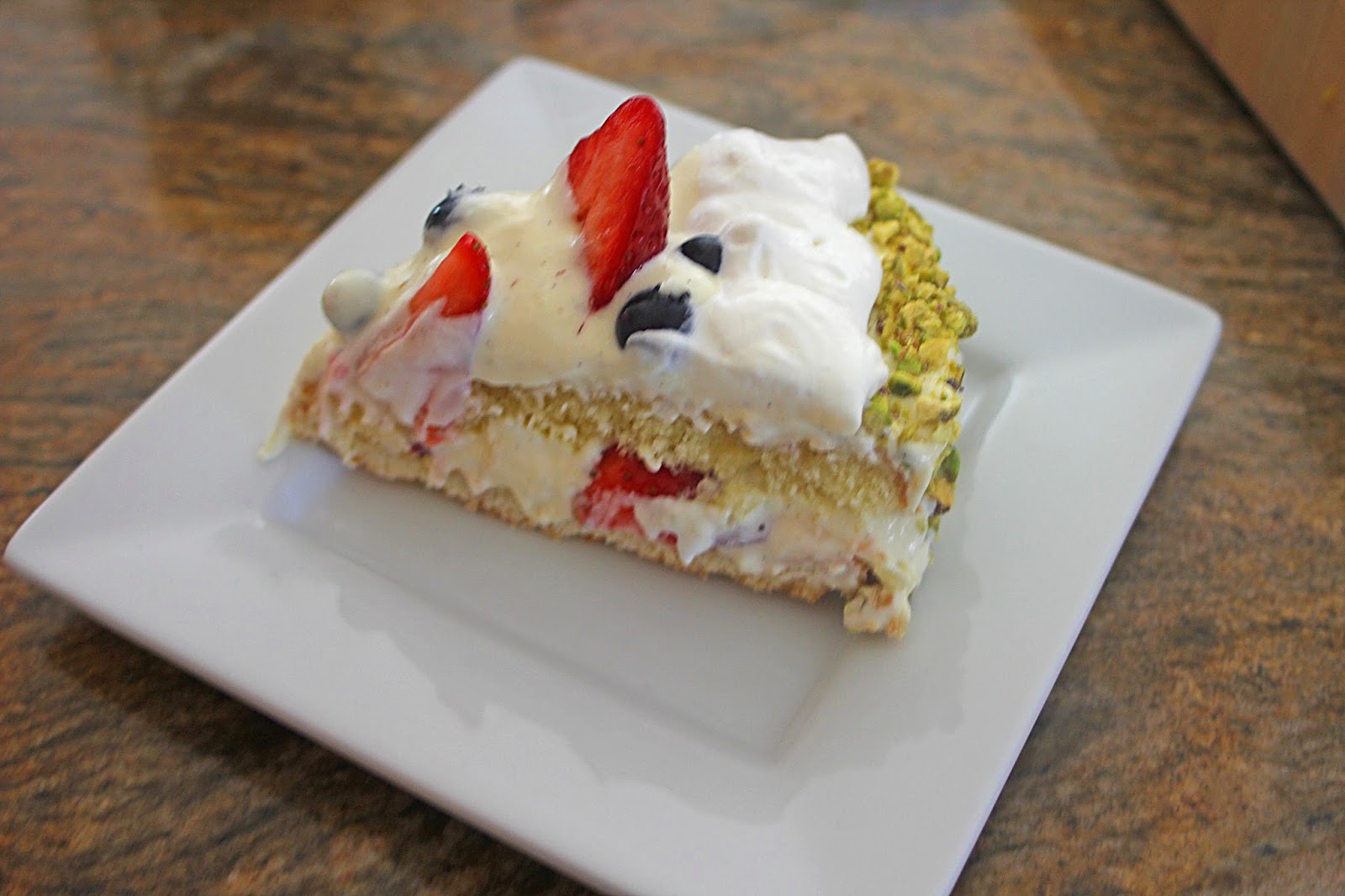 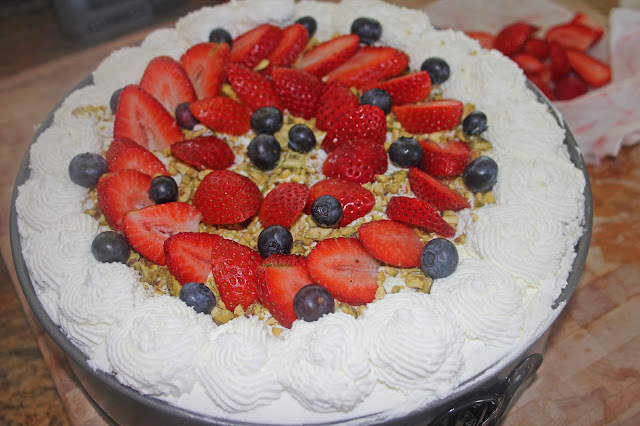 This version without the pistachios crusted on the sides

First and foremost, the sponge cake did not turn out AT ALL - the final baked cake rounds could have been hockey pucks! The instructions called for whisking the eggs & sugar over simmering water until fluffy, removing from heat, then stirring in the flour. When the eggs seemed to break after I whisked in the flour, I instinctively thought, well that doesn't look good, but baked it anyways. My instinct was correct. So, I searched online for another sponge cake recipe and found one that looked very promising at www.cakeboss.com, gave that a go, and the cakes turned out really super dense. So, after trial and error, I came up with a vanilla sponge cake that's now my go-to favorite (see link below).

Next, the syrup for brushing on the spongecake was just very sweet and not all that flavorful (basically a simple syrup with a bit of maraschino cherry juice). So I went slightly off the reservation and decided to add raspberry preserves and rum to the simple syrup instead.

Then, I had to substitute gelatin sheets (which aren't something you'd typically find in your neighborhood supermarket) with the right amount of gelatin powder to set the filling. I used half a packet of the Knox's, but the filling still ended up on the soft side. Next time around, I'll use the whole packet.

What really did turn out extraordinarily well in the recipe were the vanilla pastry cream and the sweet short pastry crust (essentially the same thing as a French "pate sucree"). Both are keepers and I will definitely use them in the future for other dessert recipes that call for them.

This recipe seems long and complicated, but it really isn't. You can make each component in advance and then assemble the whole shebang in one fell swoop. You'll be impressed and anyone you serve this to will be doubly impressed.

3. In the meantime, combine egg yolks and sugar in a bowl and mix well with a whisk. Add the flour and mix well.

4. Pour about 2 ladles of the hot milk into the egg and sugar mixture to temper, whisking constantly. This step is essential because if you pour the entire hot milk mixture into the egg and sugar, the eggs will scramble. Next, pour in the rest of the milk and whisk to combine. Pour the mixture back into the pan and bring back up to a boil, whisking constantly. Continue whisking about 4-5 minutes or until the mixture has thickened. Turn off heat and pour the pastry cream into a bowl or other container.

5. Place some plastic wrap over the top of the pastry cream to prevent a skin from forming. Let cool to room temperature. Cover the container with foil or a lid so that it is airtight and refrigerate at least 3-4 hours until cold. The pastry cream can be made ahead and refrigerated up to 3 days before using. 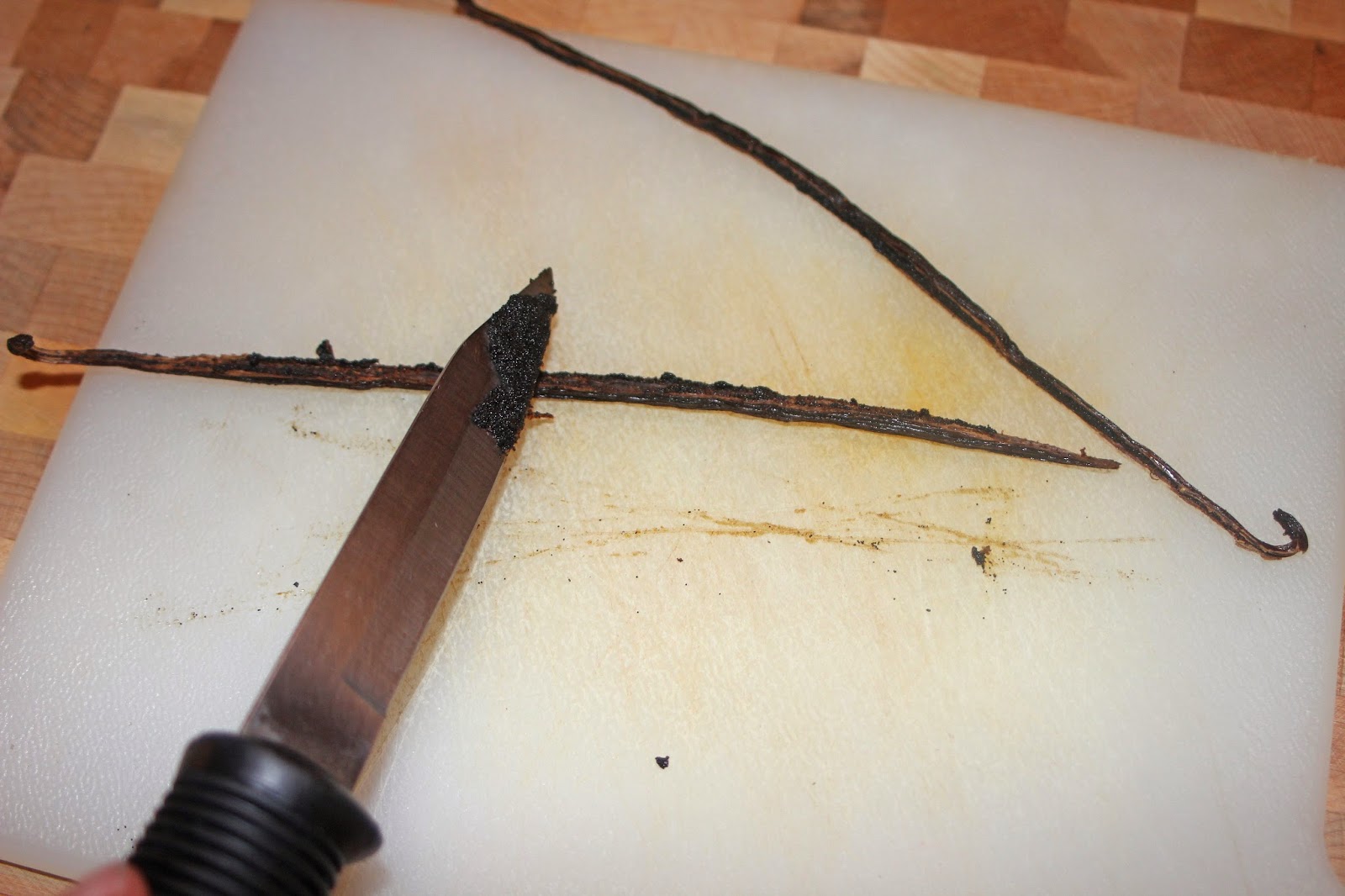 Scrape the seeds out of a halved Vanilla bean. 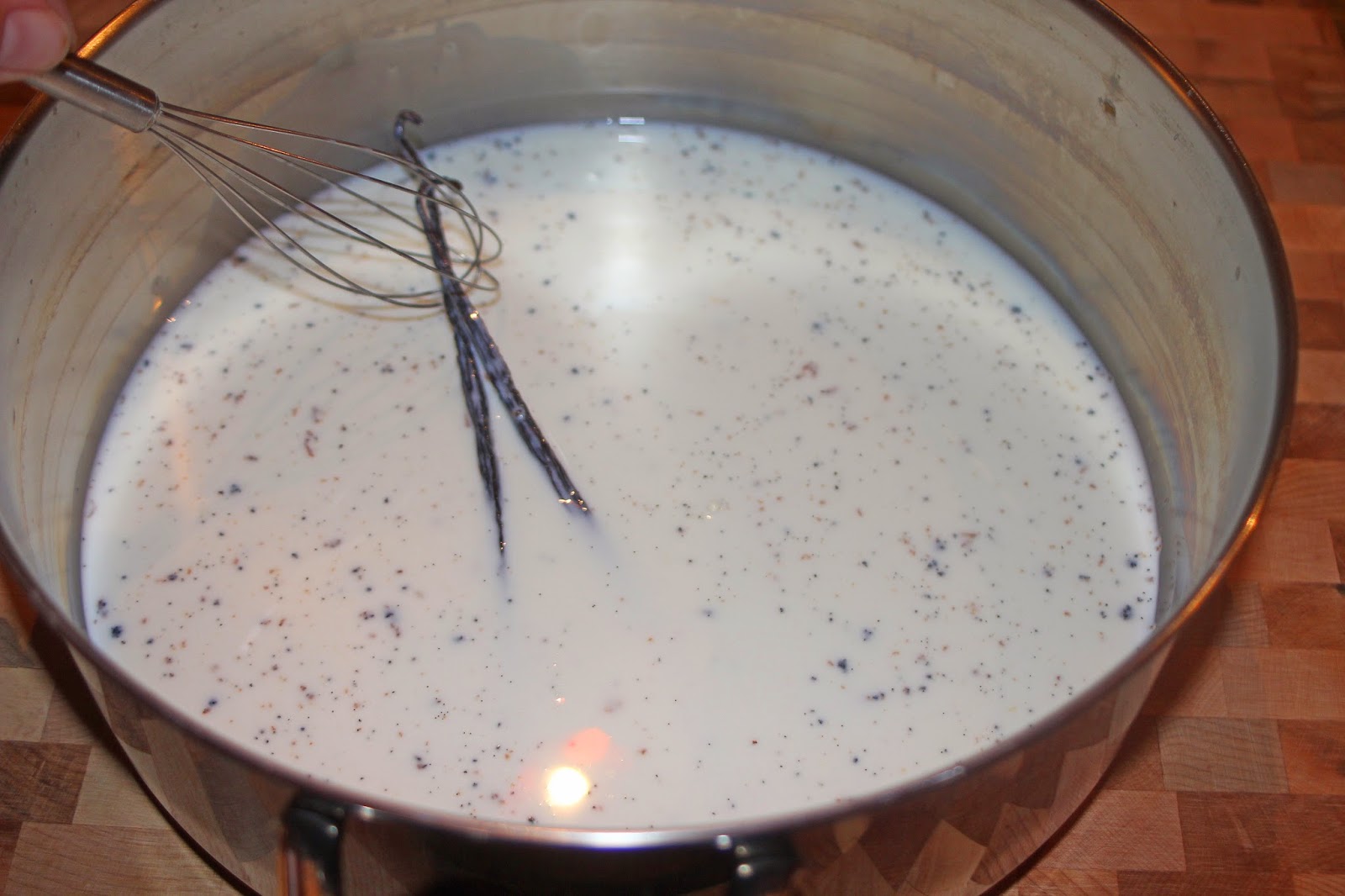 Add the vanilla seeds and halved pod to the milk mixture. Transfer the mixture to a pot and bring to a boil over medium heat. 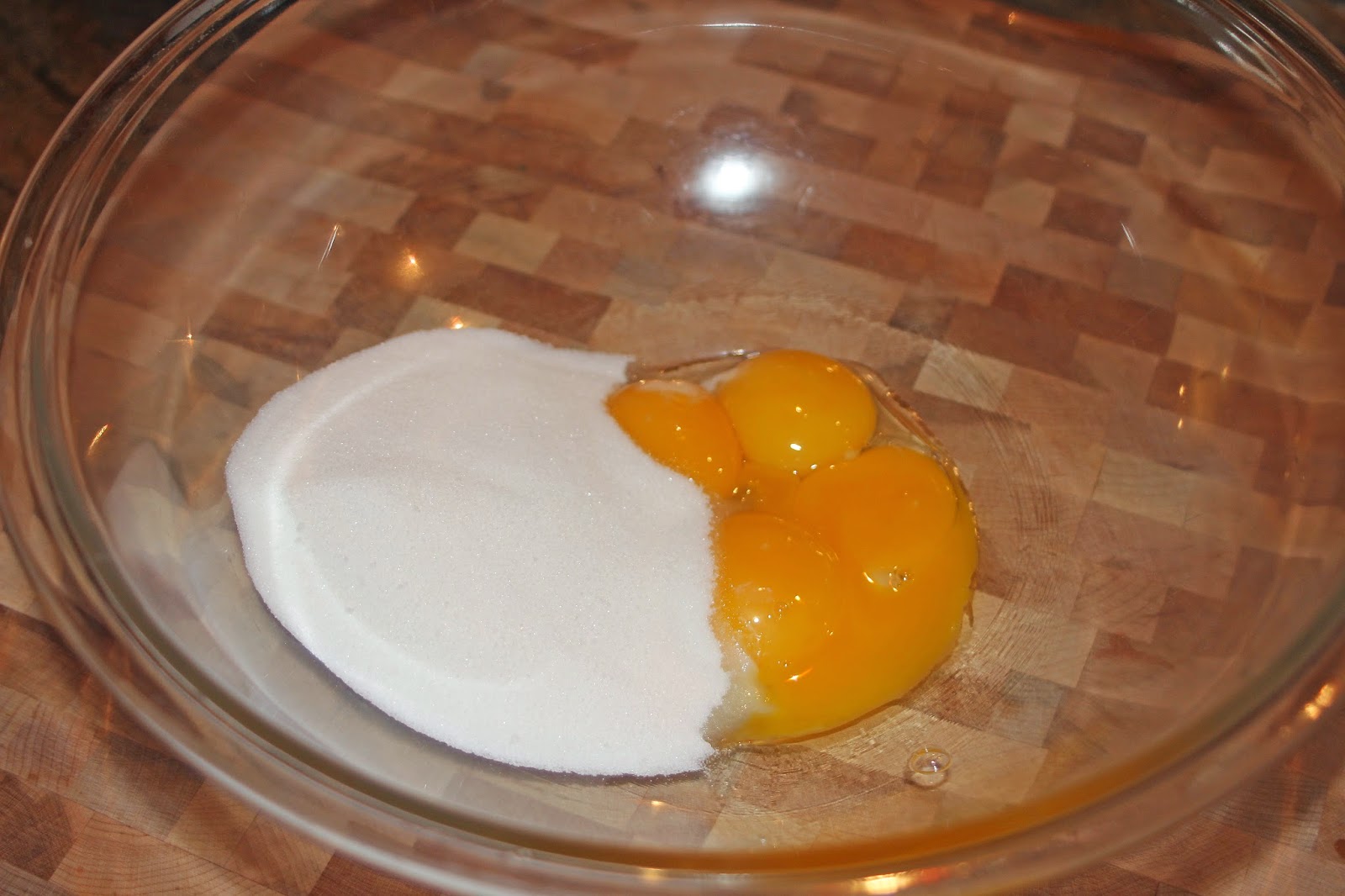 In the meantime, combine egg yolks and sugar in a bowl and mix well. 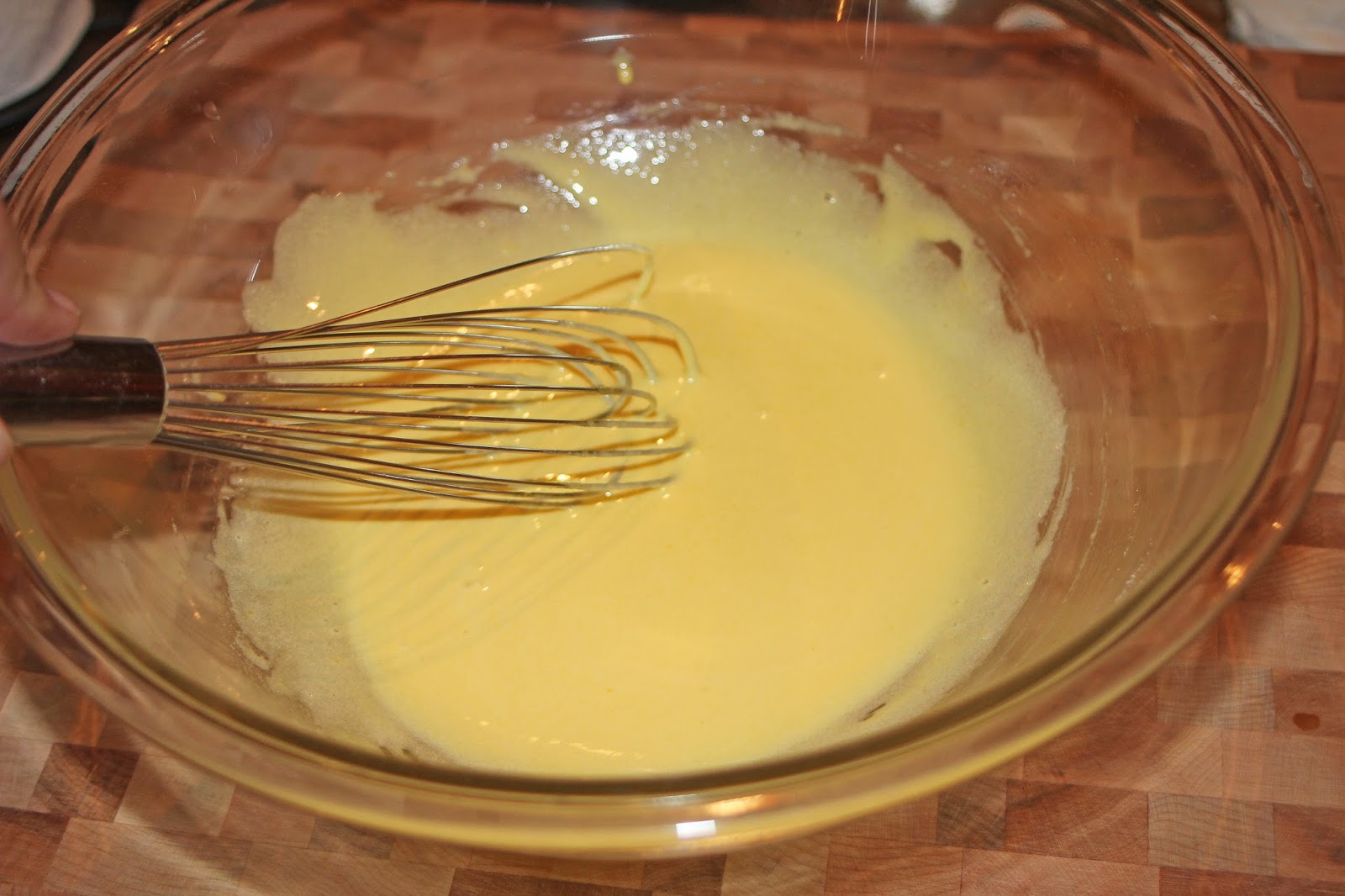 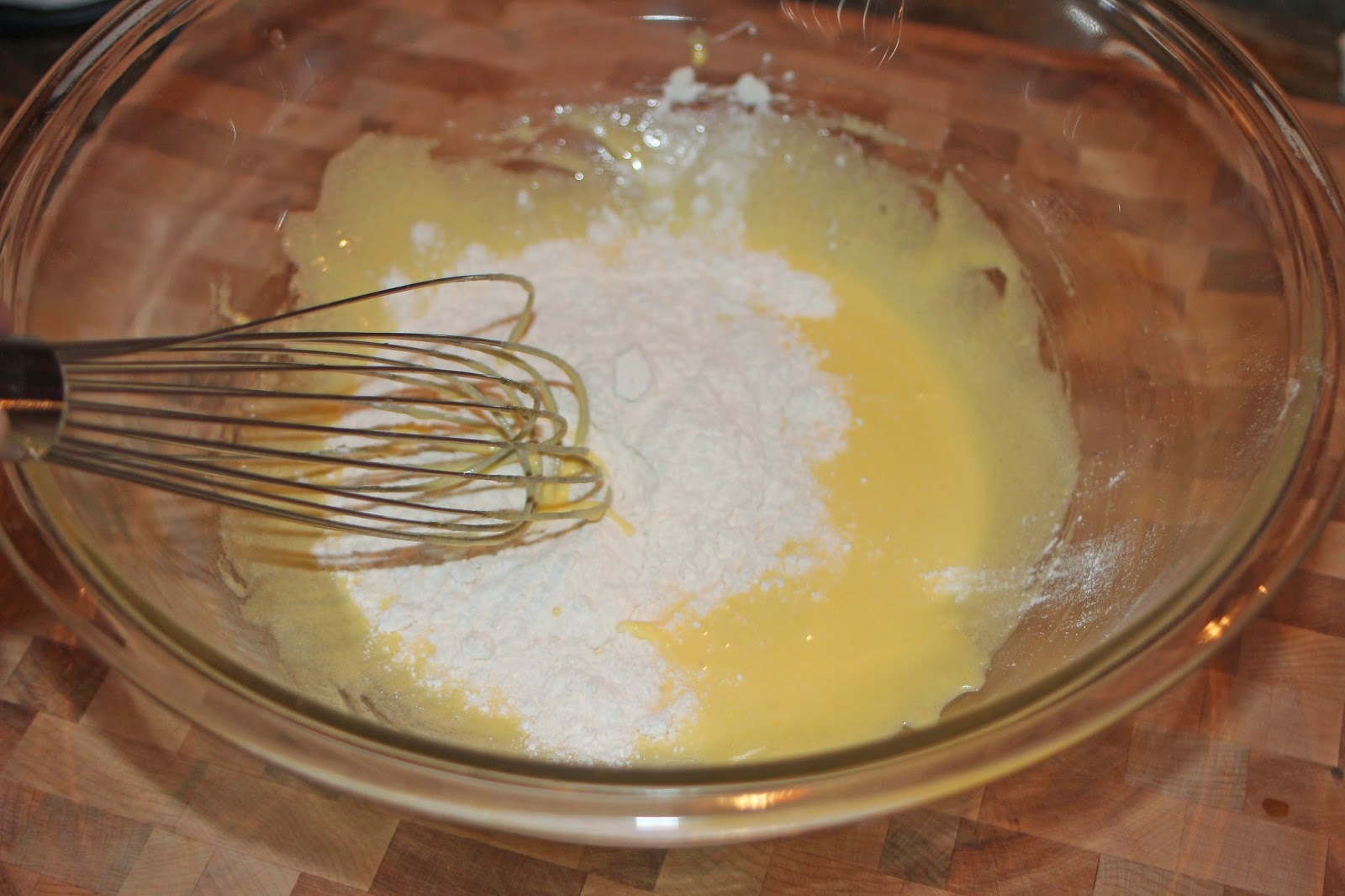 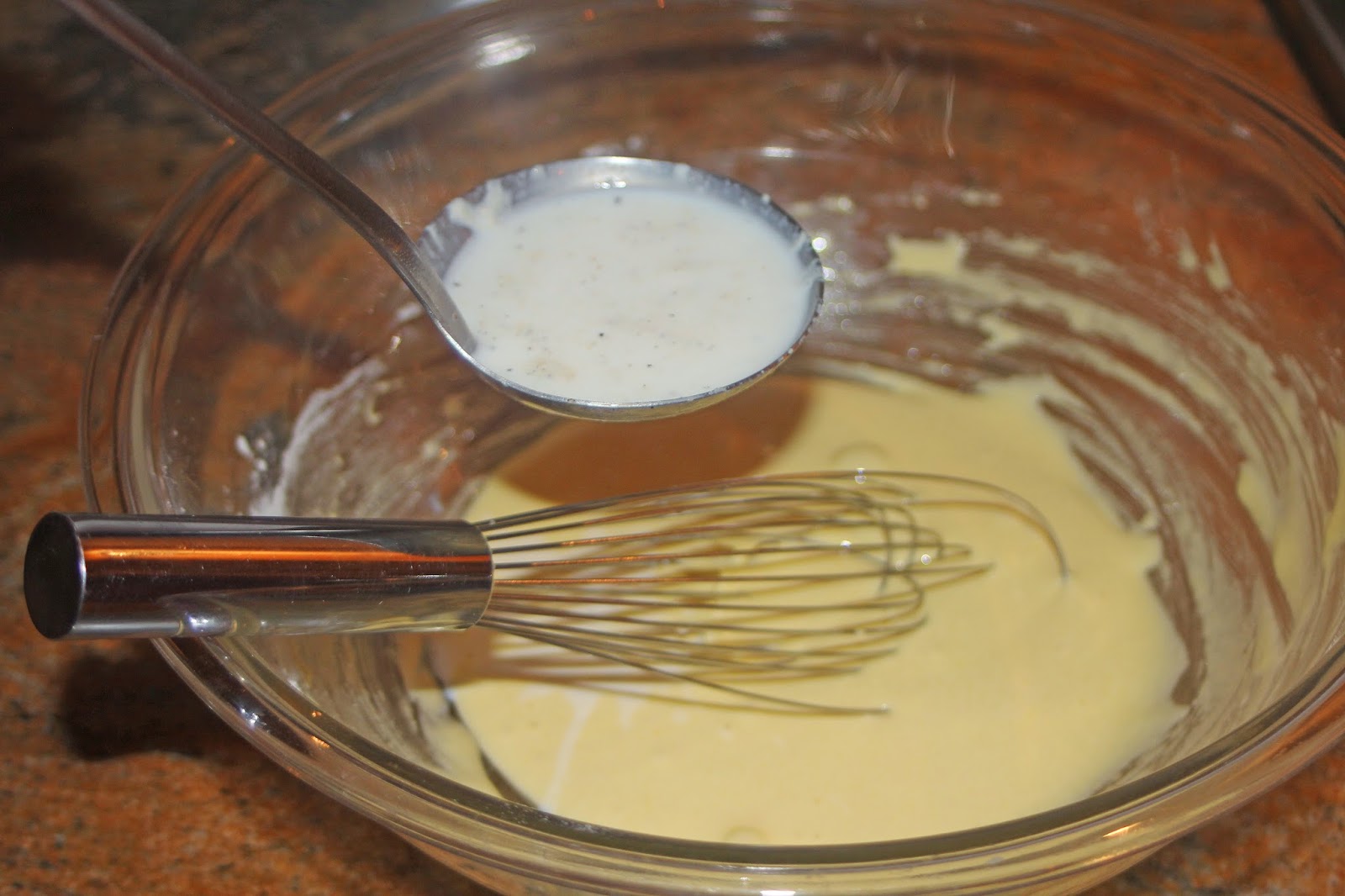 Add a couple ladles of the hot vanilla-milk mixture to the egg mixture and mix to temper. 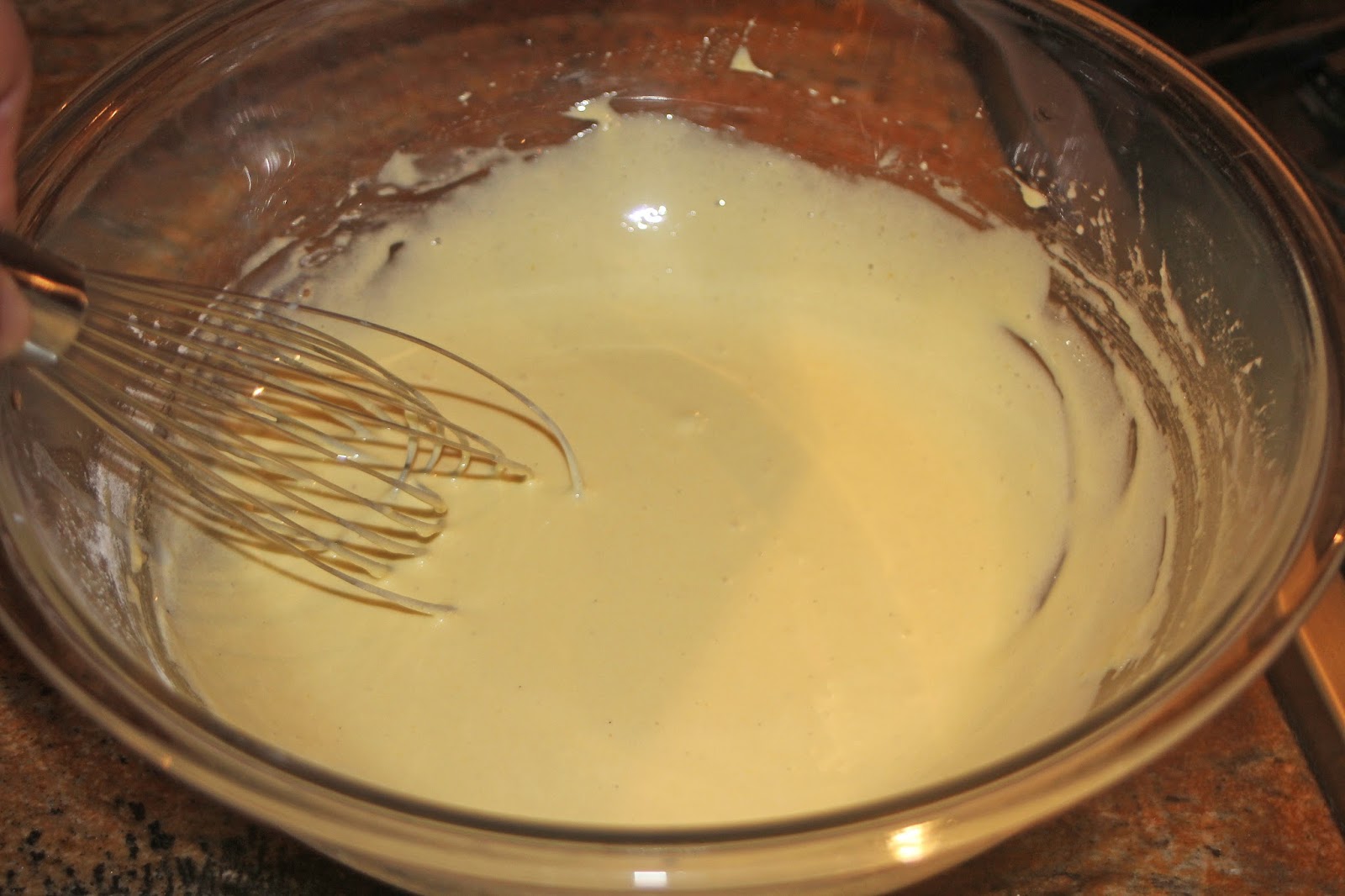 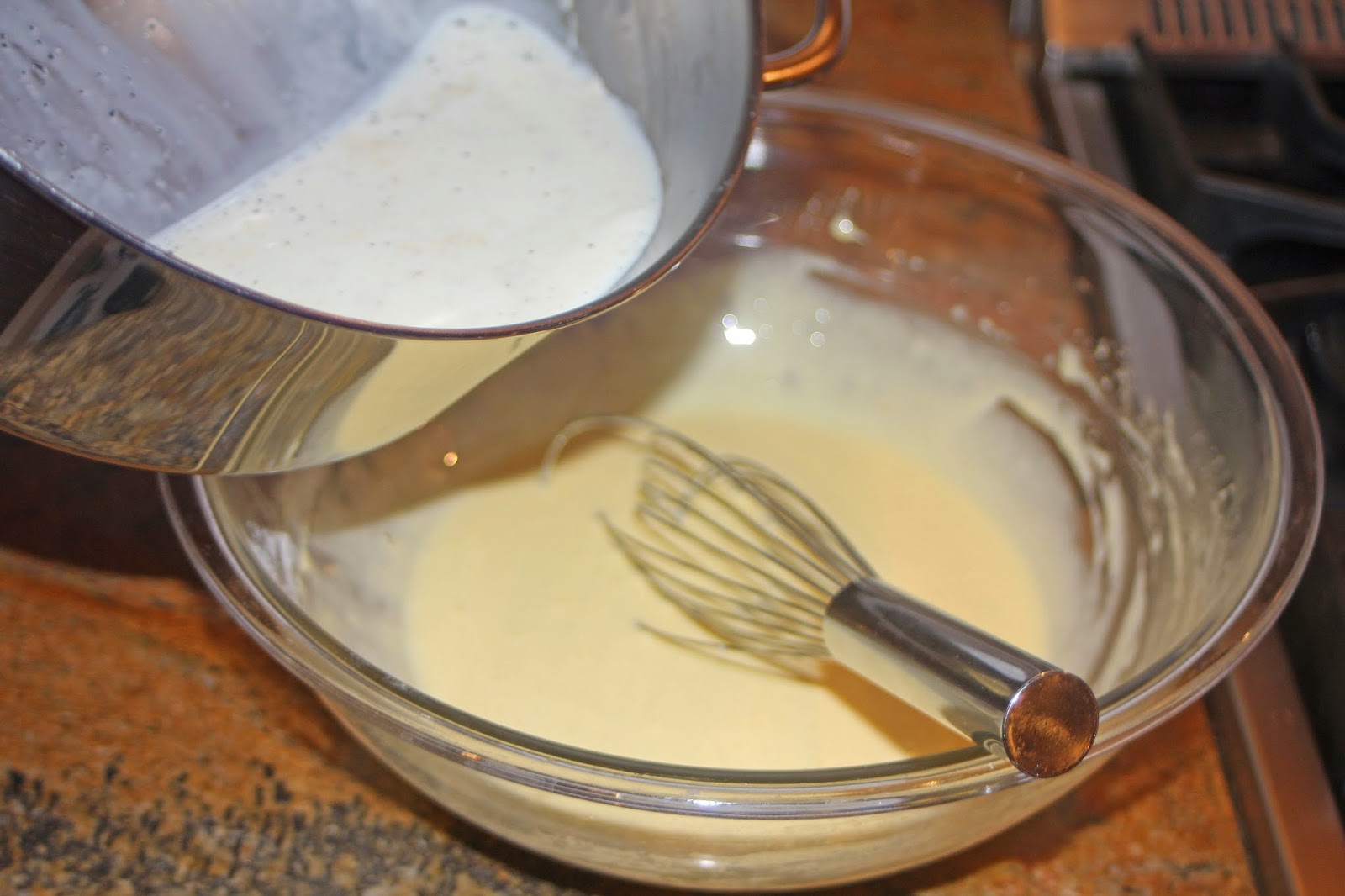 Add the rest of the hot vanilla-milk mixture to the eggs and whisk to combine. 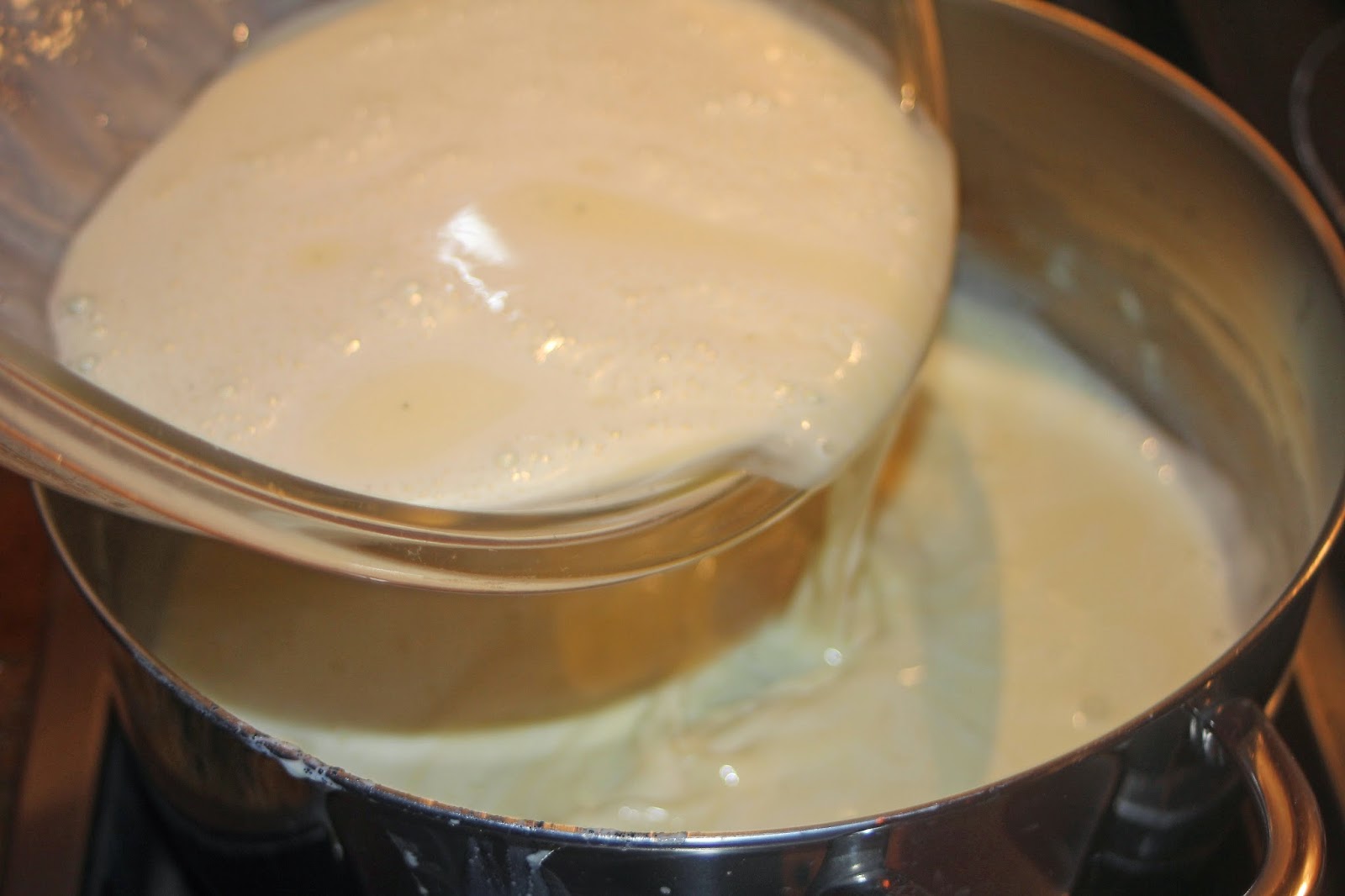 Pour the mixture back into the pan and bring back up to a boil. 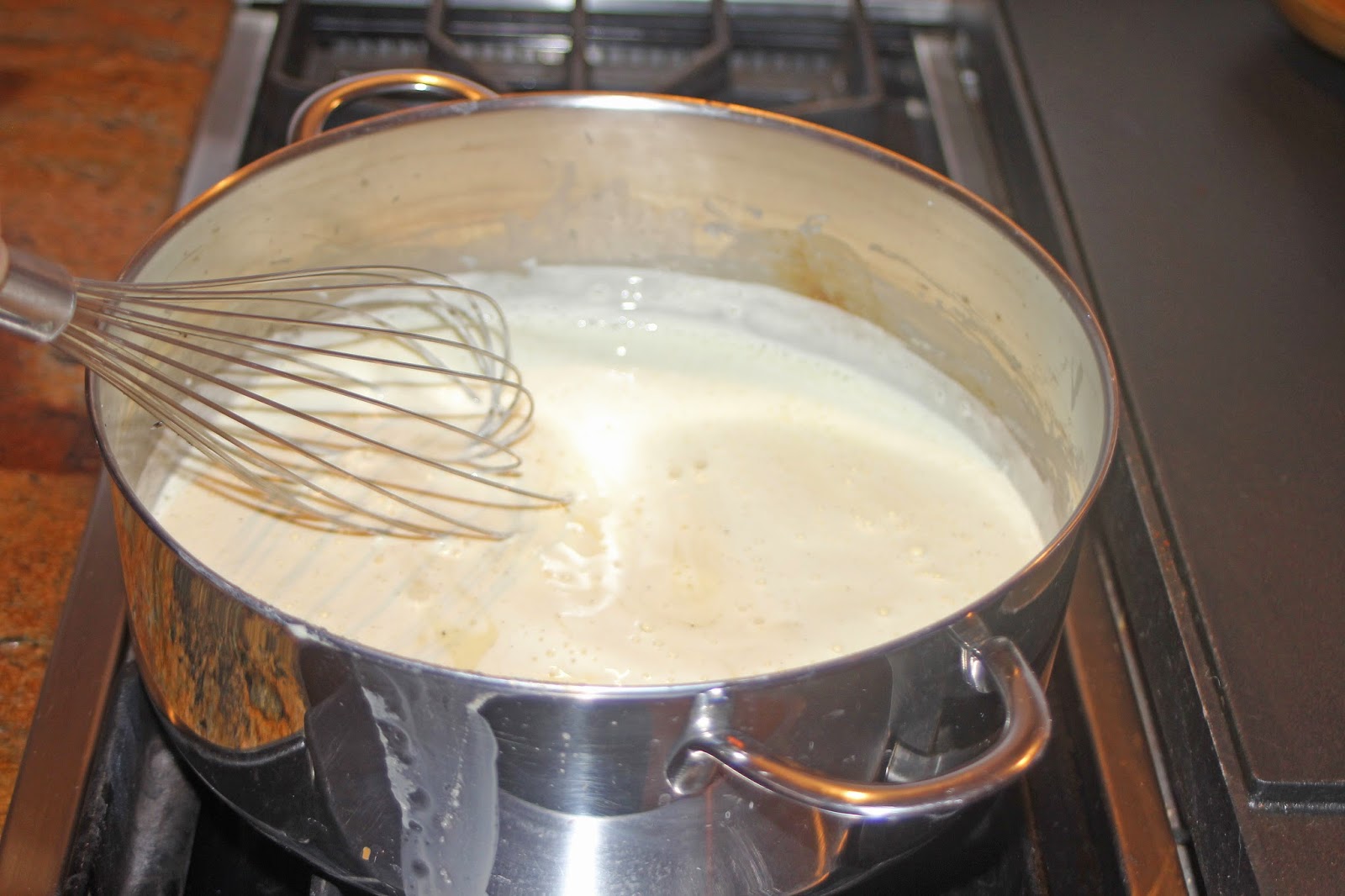 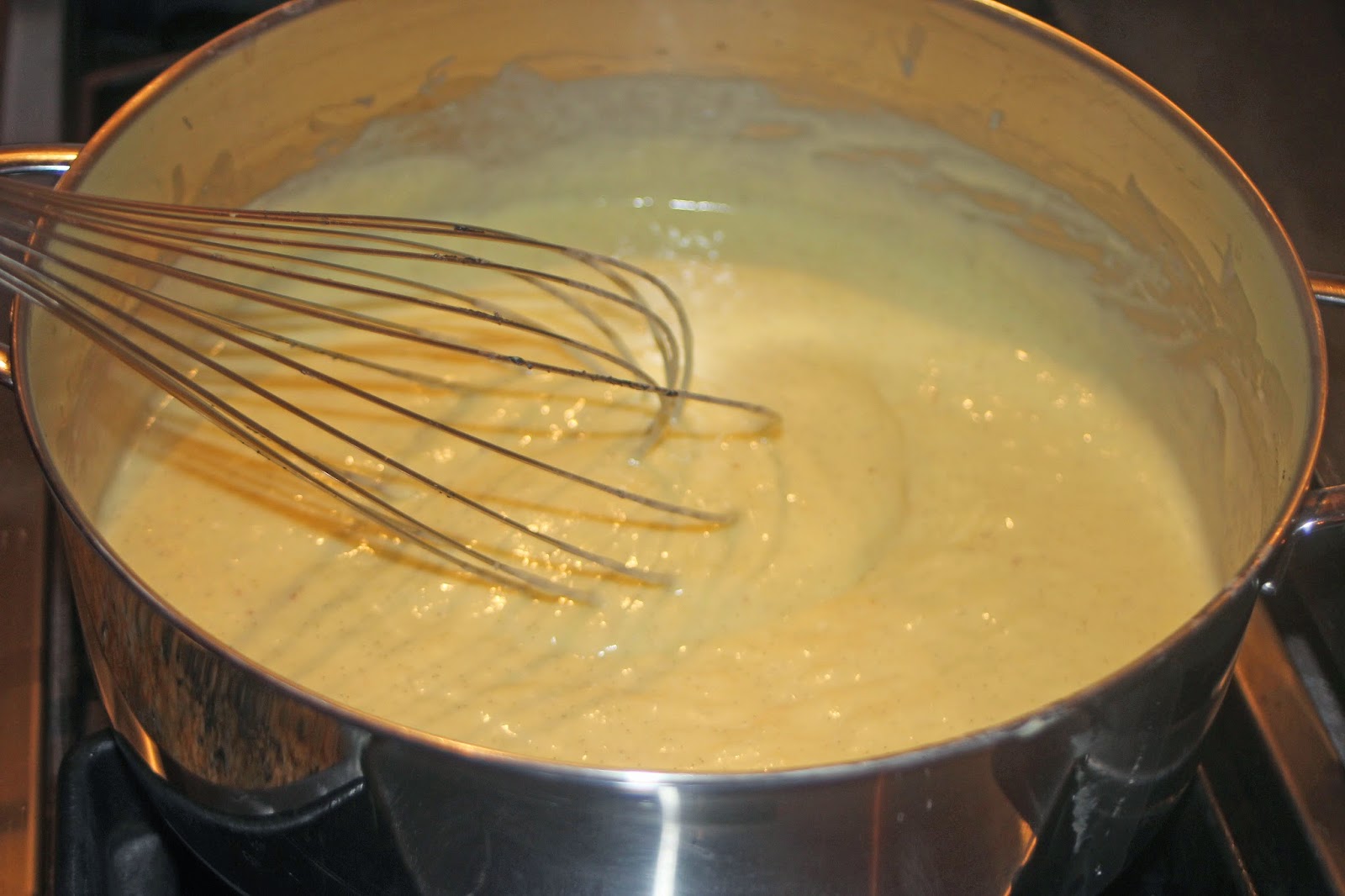 Whisk constantly until the mixture has thickened. 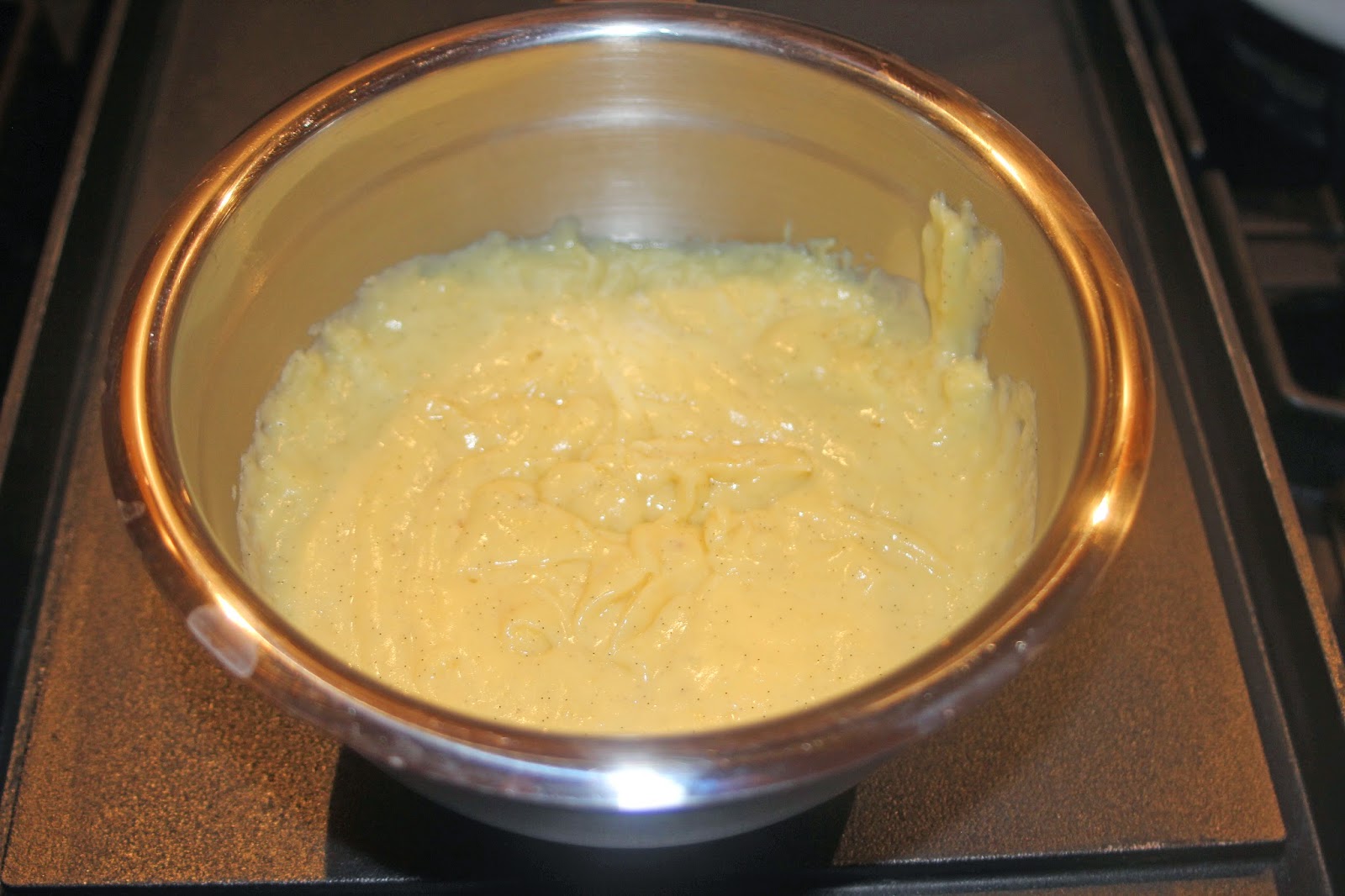 Pour the pastry cream into a bowl. 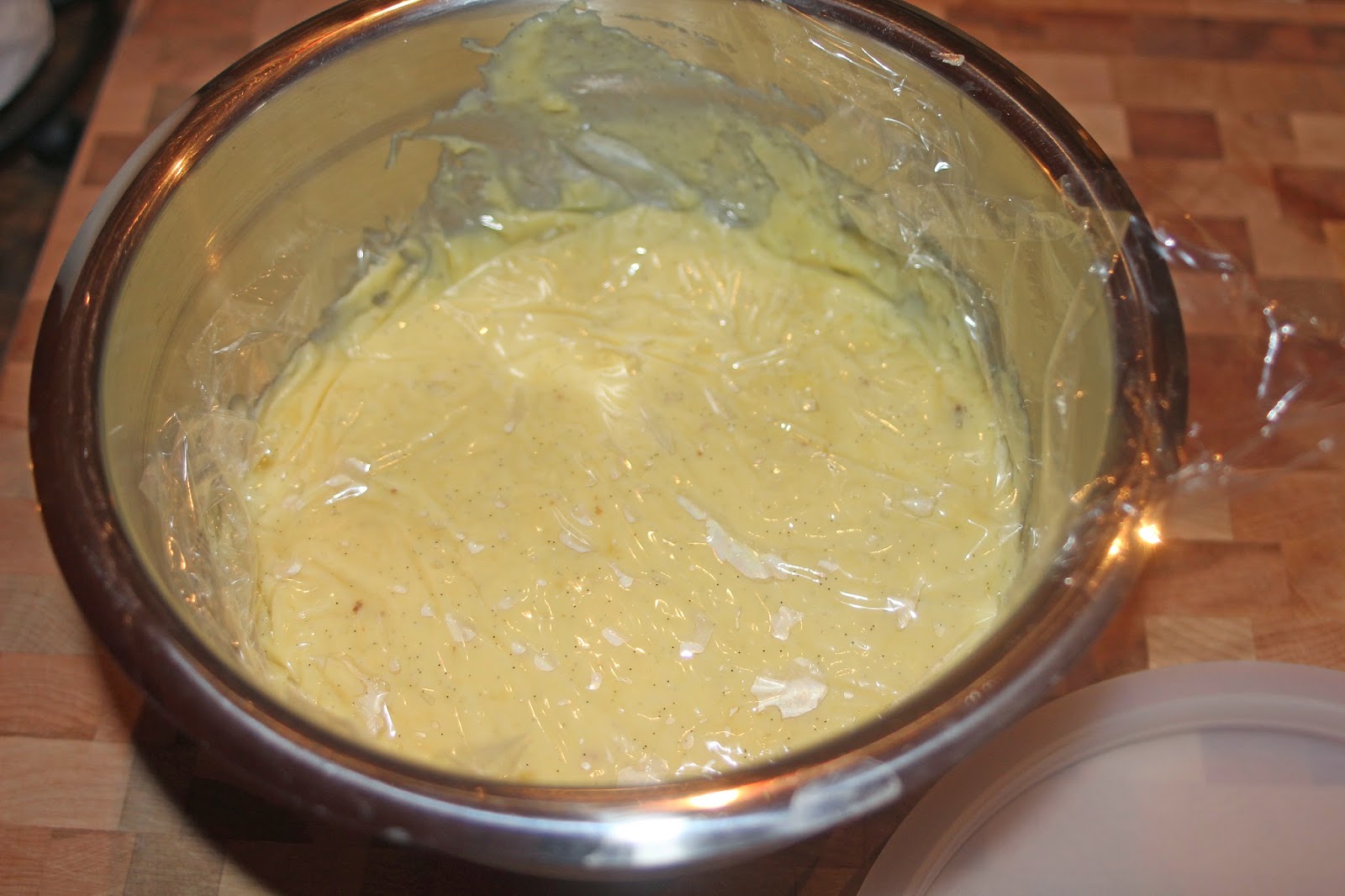 Cover the top of the mixture with plastic wrap to prevent a skin from forming. Let cool completely, cover tightly, and refrigerate at least 3-4 hours or overnight before using.

Sponge Cake : http://thegrubfiles.blogspot.com/2017/02/vanilla-sponge-cake.html
This recipe makes two 9" cake rounds (save the second round by wrapping in several layers of plastic wrap, then foil, and place in the freezer - will keep for about 2 months) 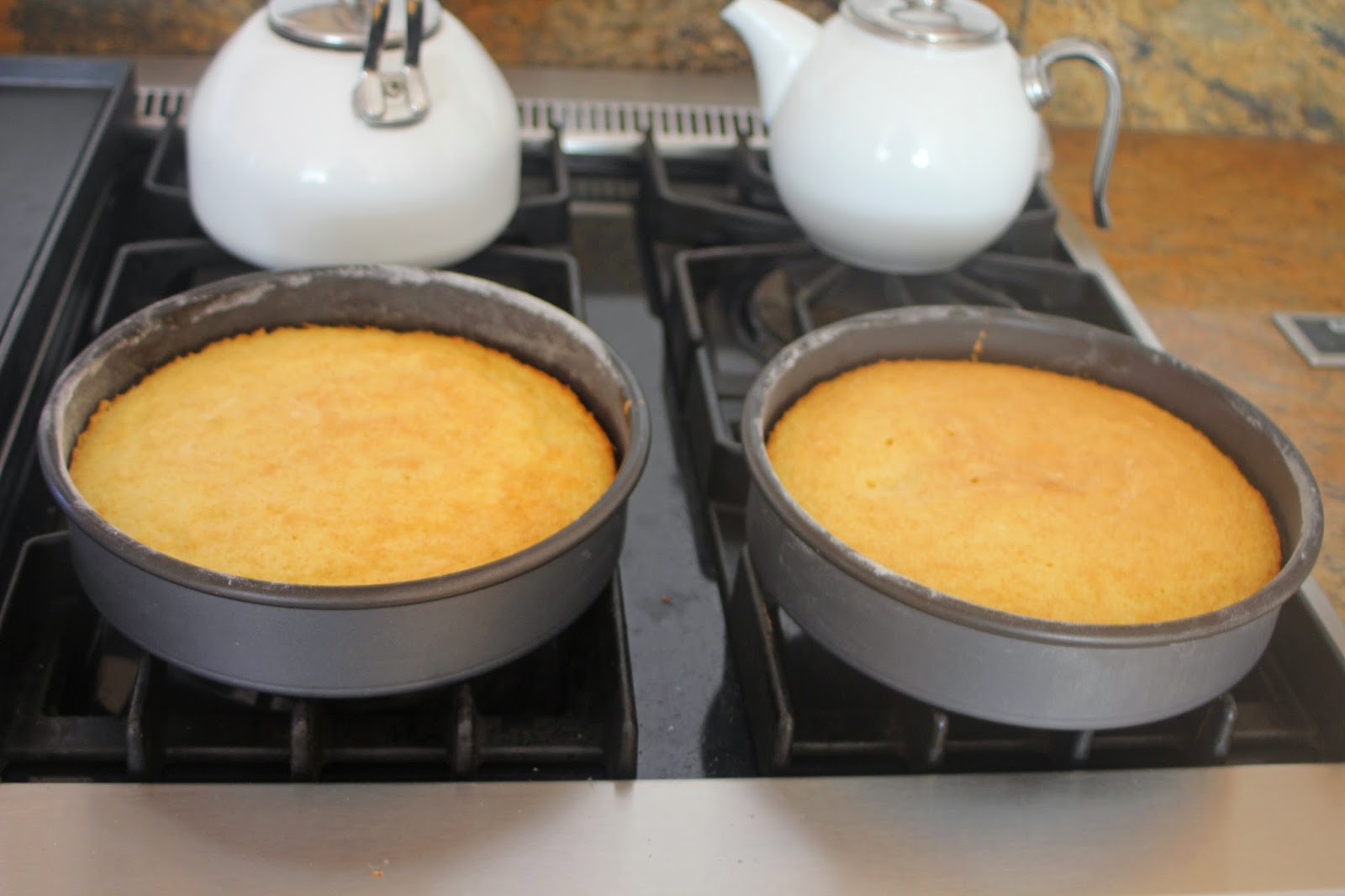 Remove cakes from the oven and let come to room temperature. You will only need one of these for this recipe.

1. Place the butter and sugar in the bowl of an electric stand mixer and blend on medium speed to cream. Add a pinch of salt, the vanilla and eggs and mix briefly until just blended.

2. Sift the flour and baking powder together, then add to the butter mixture, blend & knead briefly until you have a smooth dough.

5. Preheat oven to 350F. Take the pastry dough out from the frig and cut into thirds. Roll out one of the portions on a floured surface into a 1/8" thick round. Fit a round of parchment paper or waxed paper on to the bottom of a 9" springform pan, then butter and flour it. Place the dough on top of the parchment and spread it out with your fingers as needed to make sure it covers the entire bottom of the pan.

6. In the meantime, wrap the remaining two portions of pastry dough in plastic wrap, place in a Ziplock-type bag and refrigerate up to 3-4 days, or freeze until ready for another use. This dough will keep for up to a month in the freezer.

7. Bake the pastry dough for about 15 minutes (on a rack midway up the oven) or until the crust is lightly golden. Remove the pan from the oven and set aside to cool. 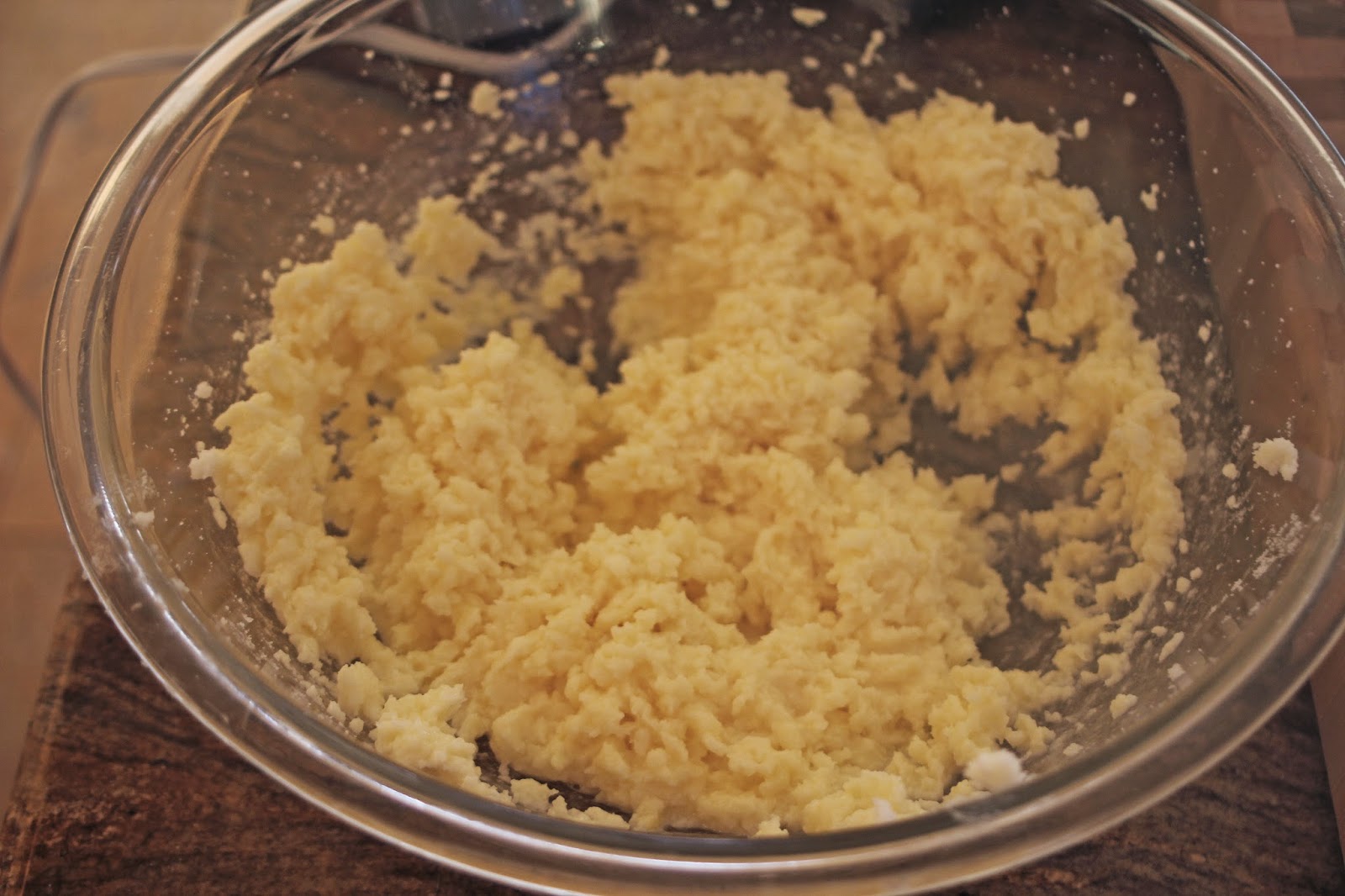 Cream the butter and sugar. 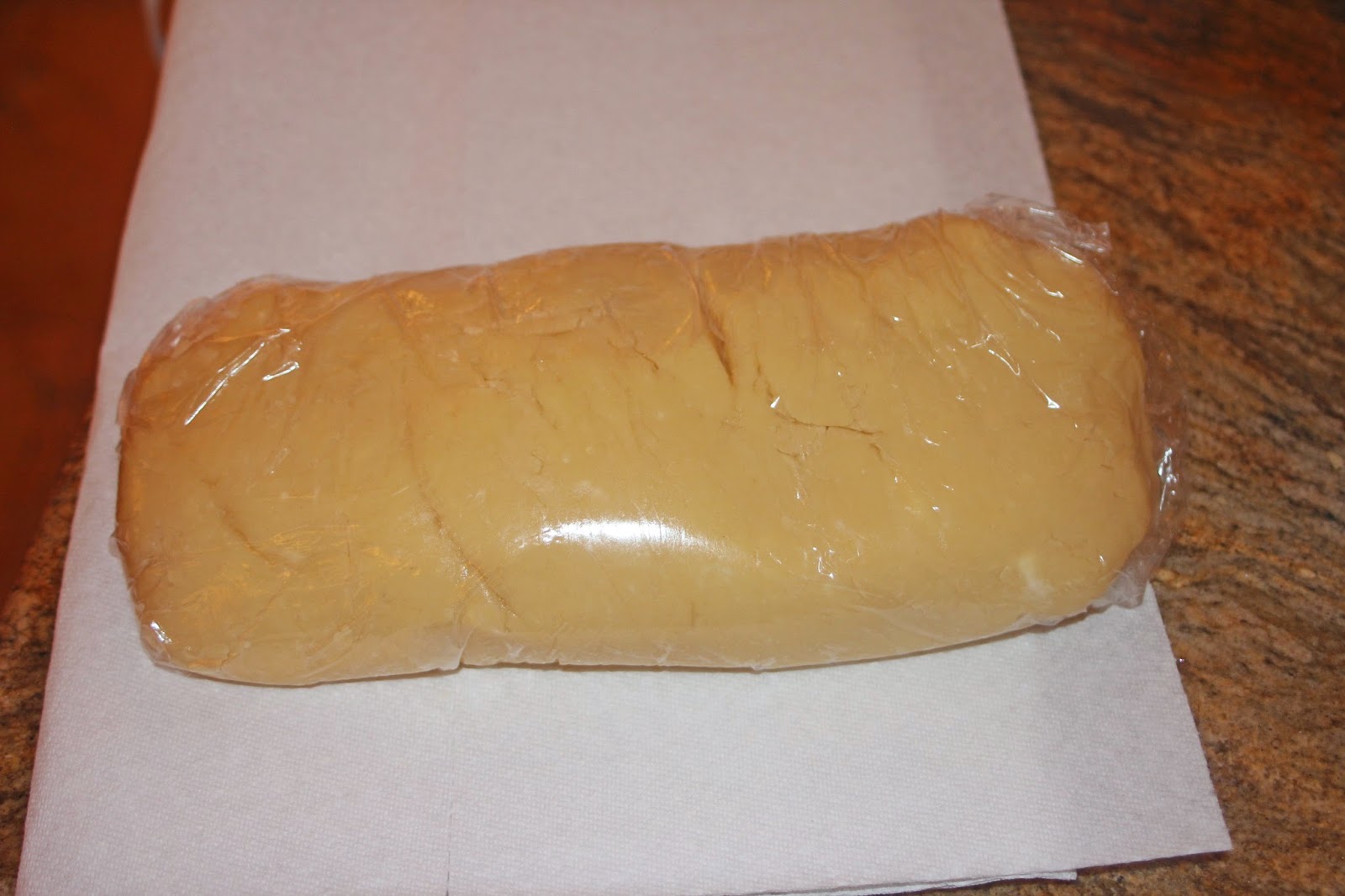 Wrap the dough in plastic wrap that's been brushed with oil and refrigerate a minimum of one hour.

1. Combine 2 tbsp. of water and the sugar in a small sauce pan and bring to a boil. Remove from heat and let cool. 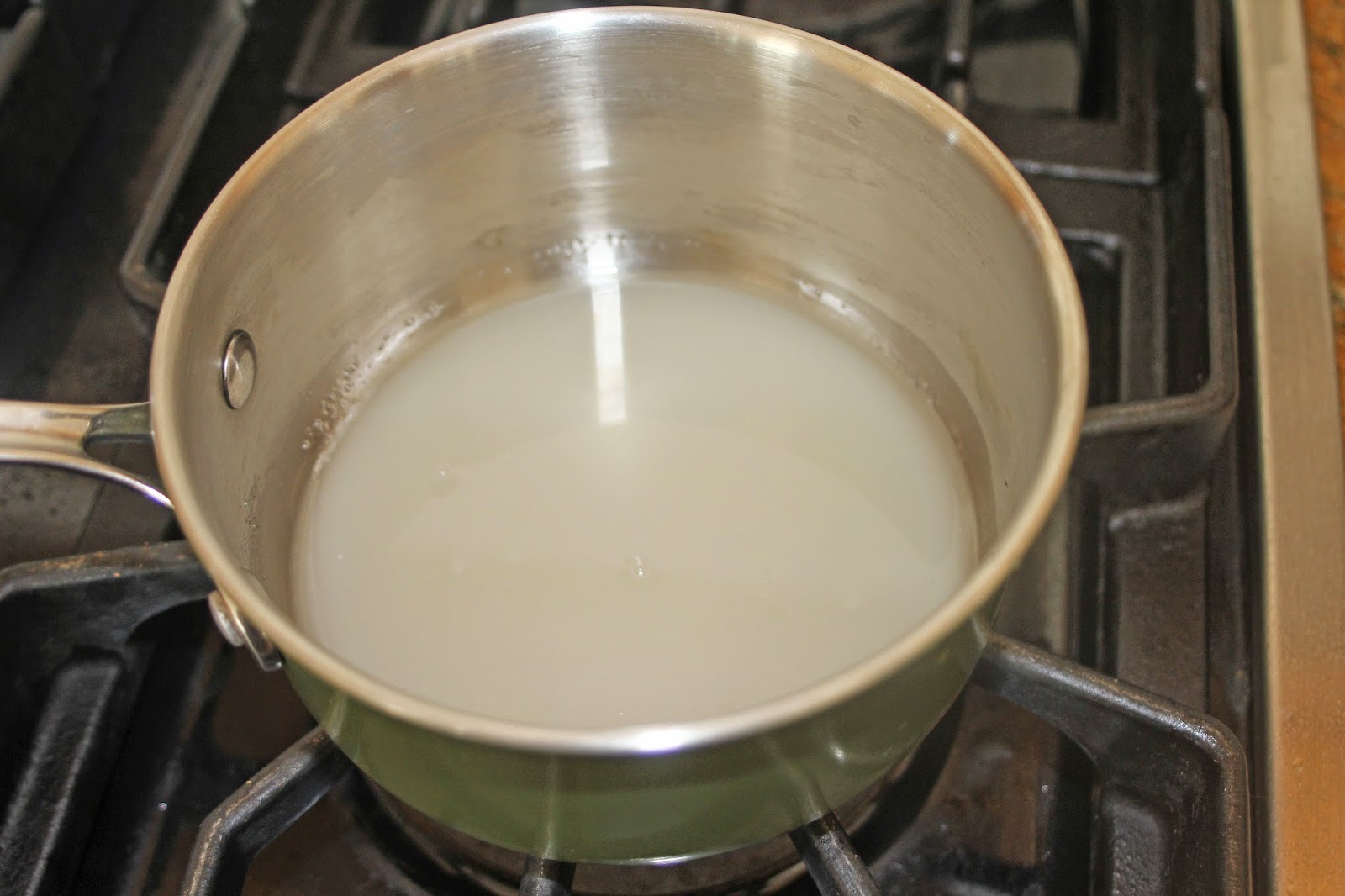 Bring the sugar and water mixture to a boil. 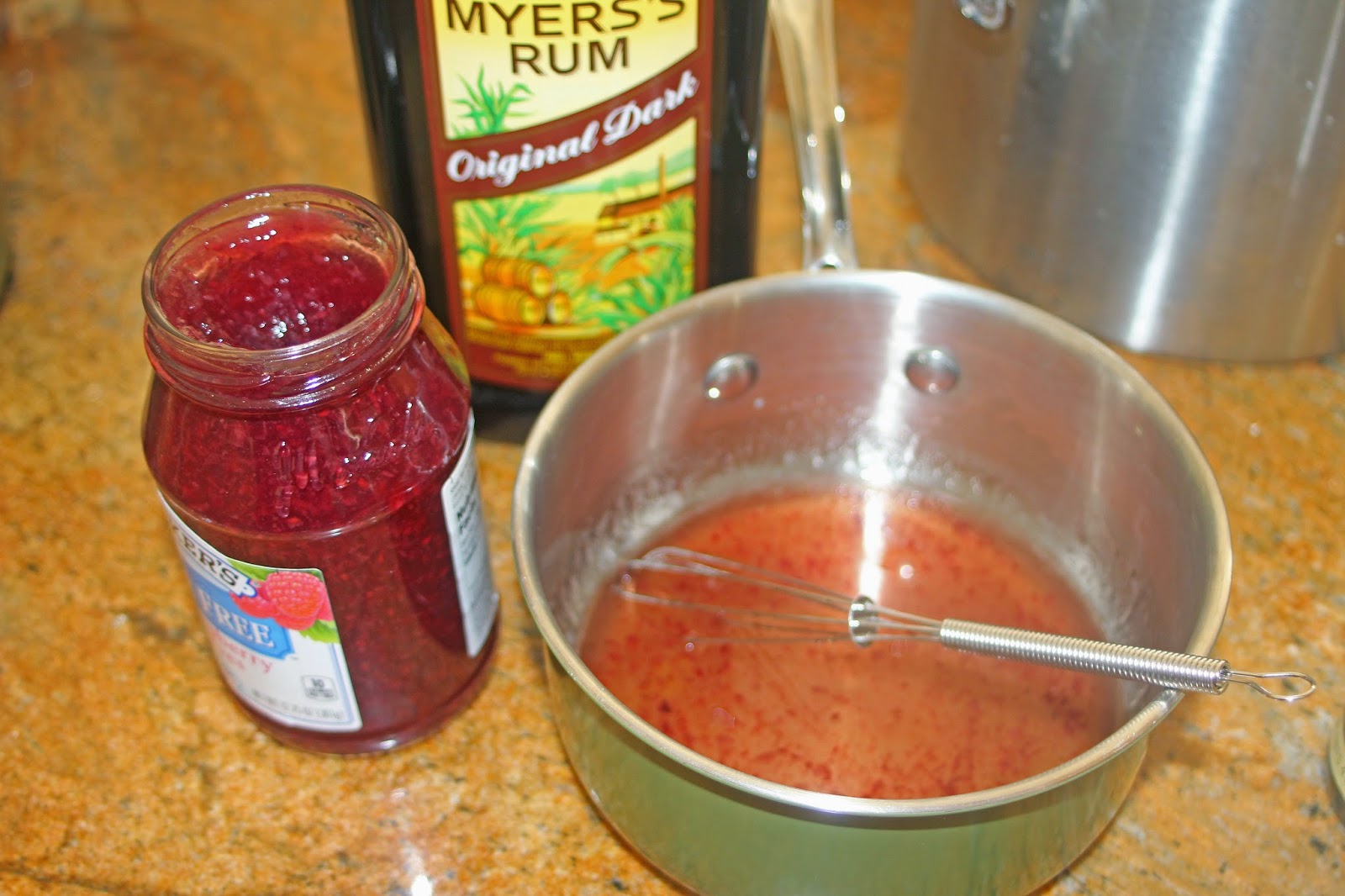 After the simple syrup has cooled, add the jam, rum and 1 tbsp. of water. Stir to combine and set aside.

4. Place 2 tbsp. of heavy cream into a small sauce pan and bring to a boil. Remove from heat and stir in 1 packet of unflavored gelatin. When the gelatin has dissolved, stir in the cold pastry cream. Next, gently fold in 2 1/2 cups of sweetened whipped cream (I'll link my recipe for this shortly).

7. Garnish the top of the cake with assorted berries, then pipe some sweetened whipped cream in a border around the cake.

8. Using an offset spatula, spread some of the whipped cream around the edges of the cake.

9. Place the cake in a cake holder or covered in foil (just make sure the foil doesn't touch the cake and destroy the decor) and refrigerate at least 1 hour or preferably overnight.

10. To serve: remove the cake from the frig, remove the sides from the springform pan, and peel off the parchment paper siding. Lift the cake off of the bottom of the pan with a large spatula and place onto a serving platter. Spread a bit of sweetened whipped cream around the sides and garnish with chopped unsalted pistachios. Slice, serve and garnish with fresh mint leaves if you have them on hand. 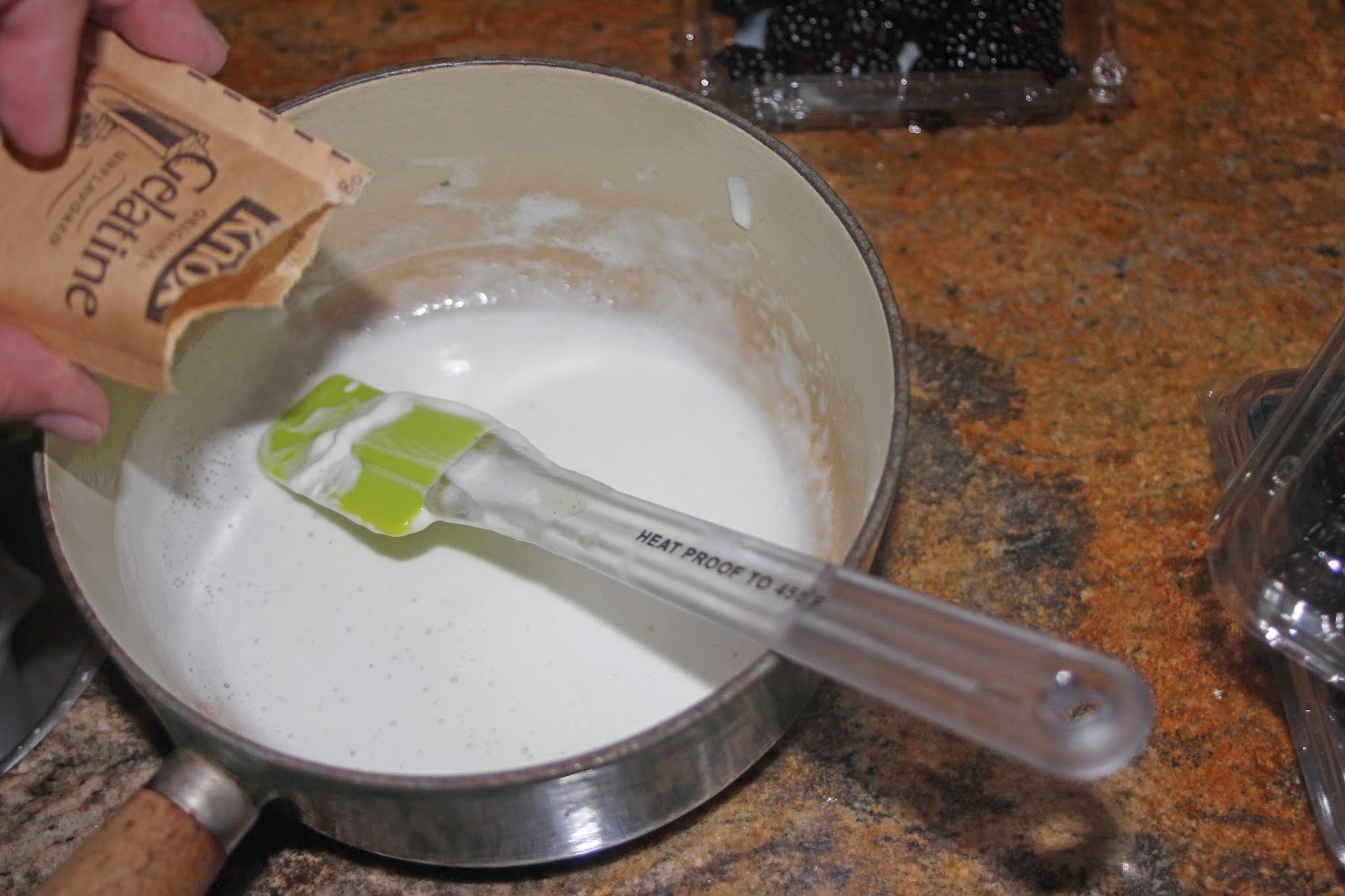 Bring 2 tbsp. of heavy cream to a boil. Remove from heat and add 1 packet of unflavored gelatin. 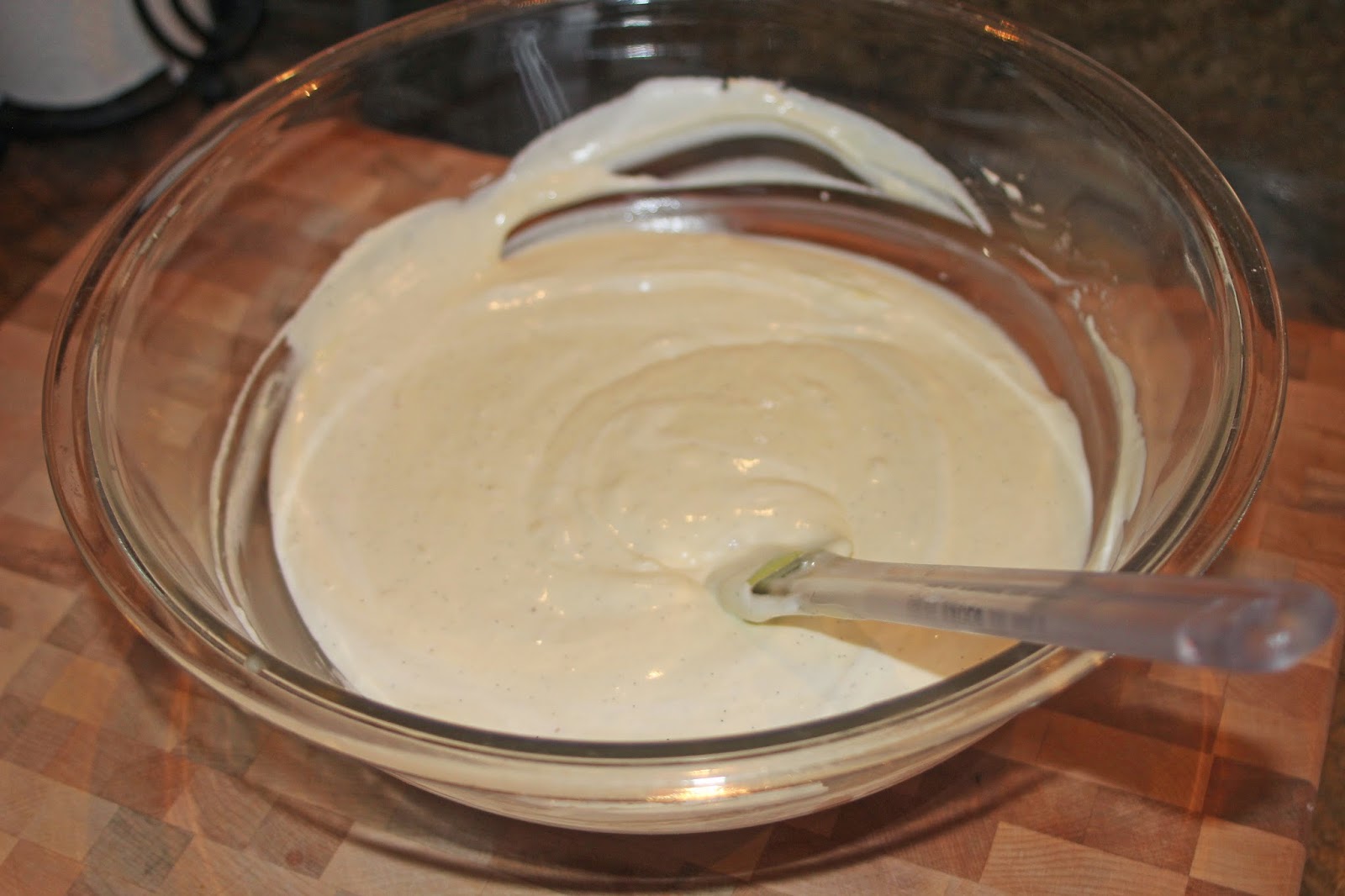 Stir the pastry cream in with the gelatin mixture 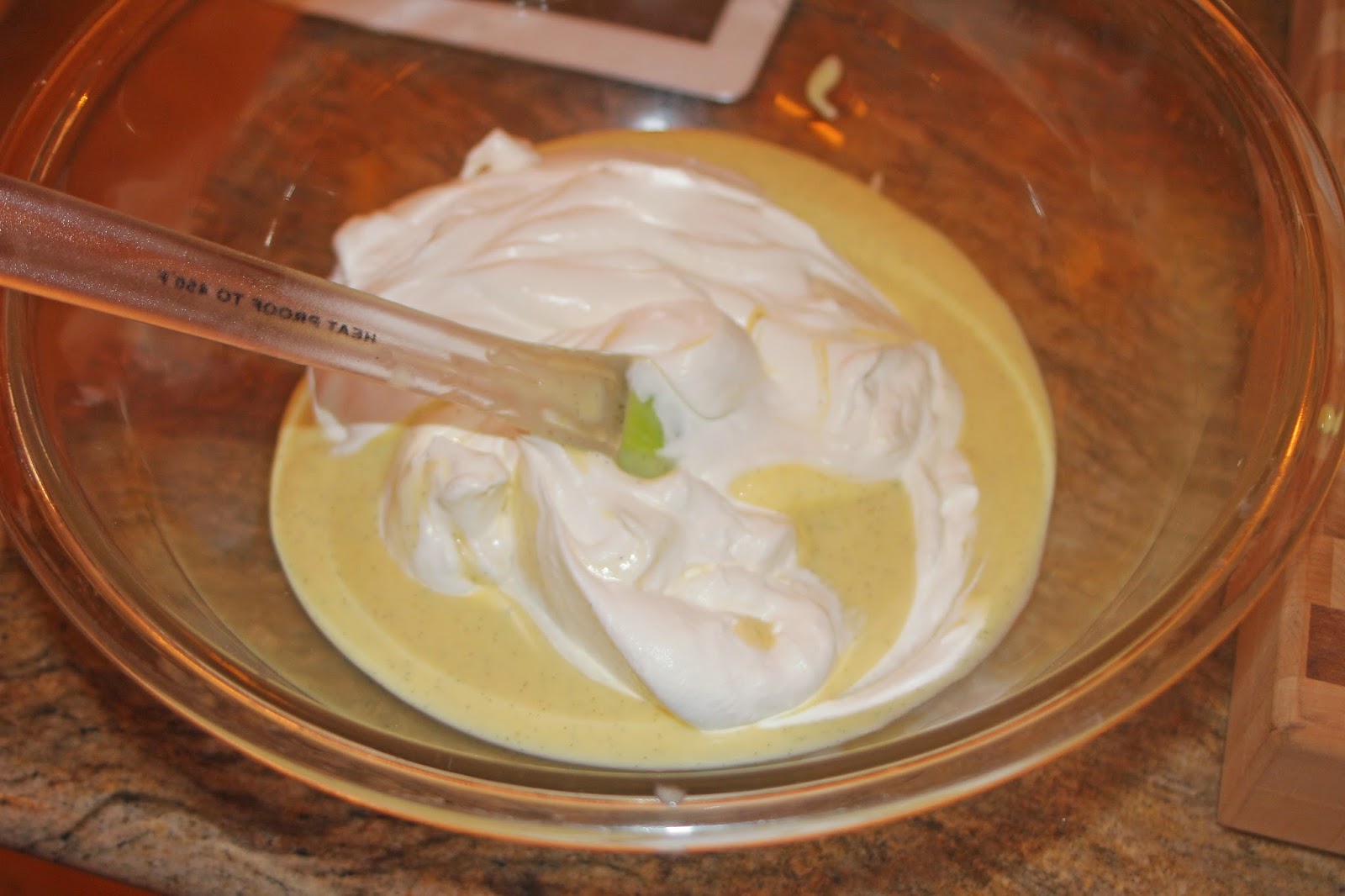 Then fold in 2 1/2 cups of sweetened whipped cream. 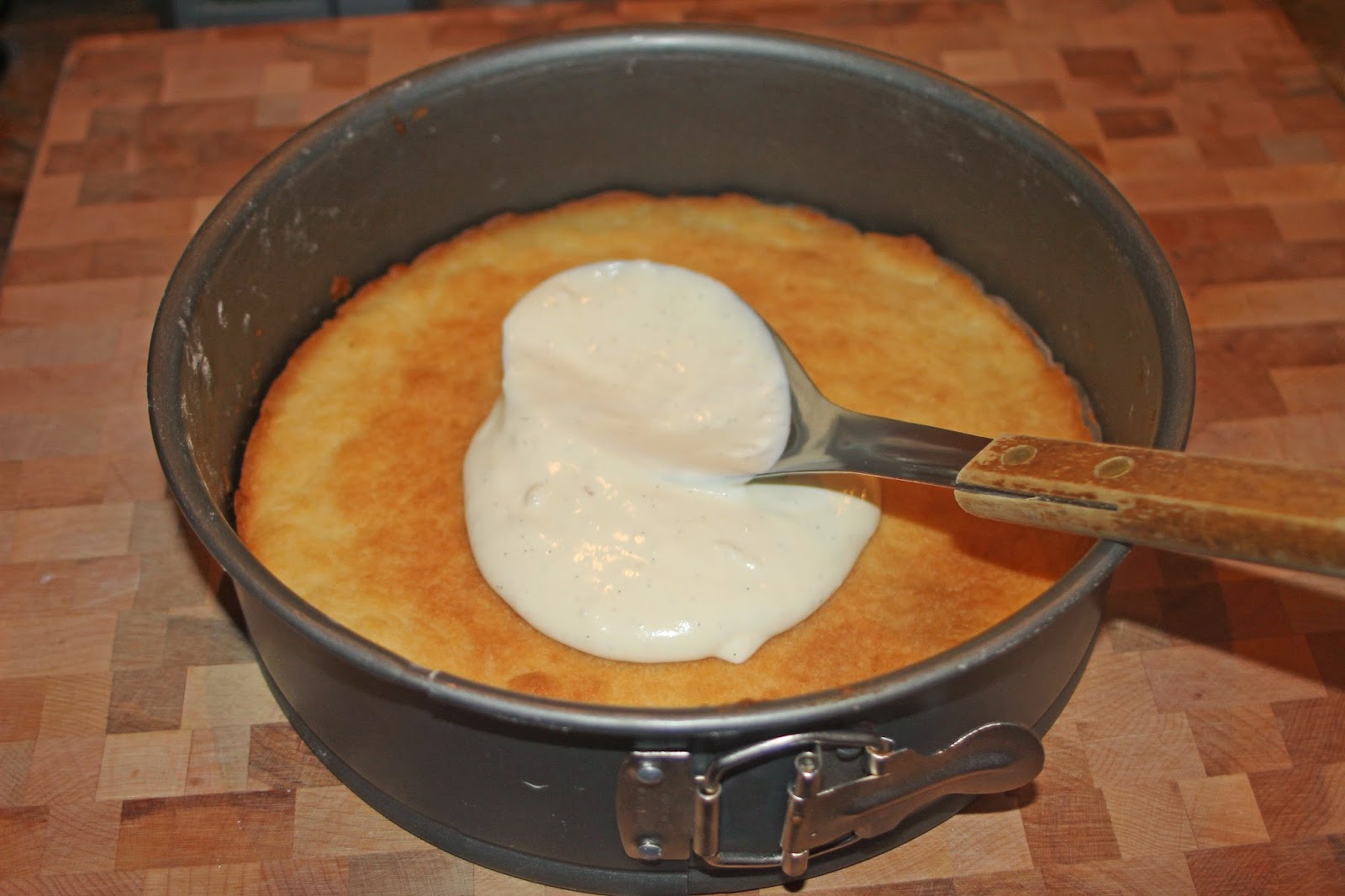 Spread 2/3 cup of the pastry cream mixture over the baked short crust. 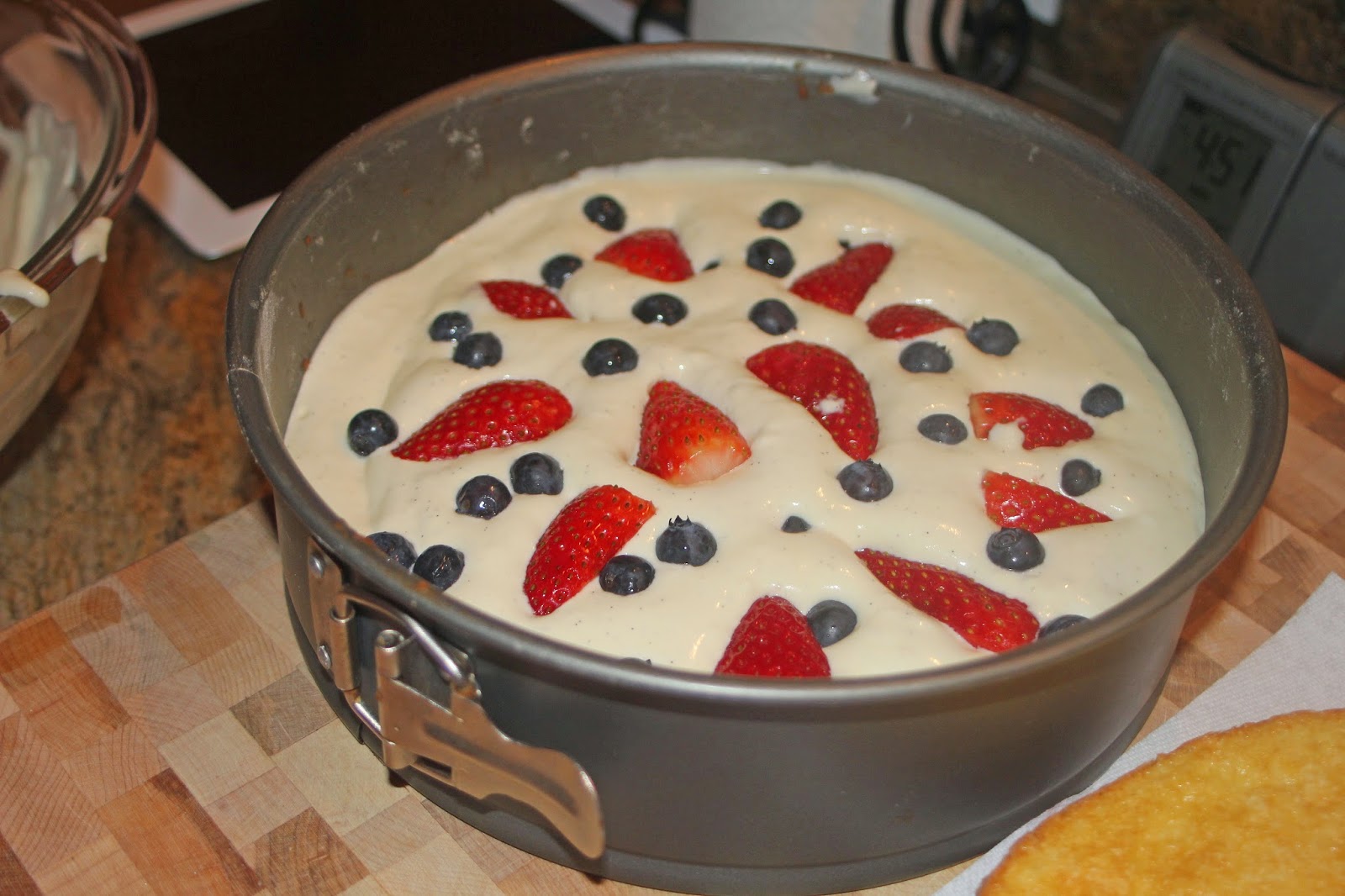 Add some of the fresh berries over the pastry cream layer. 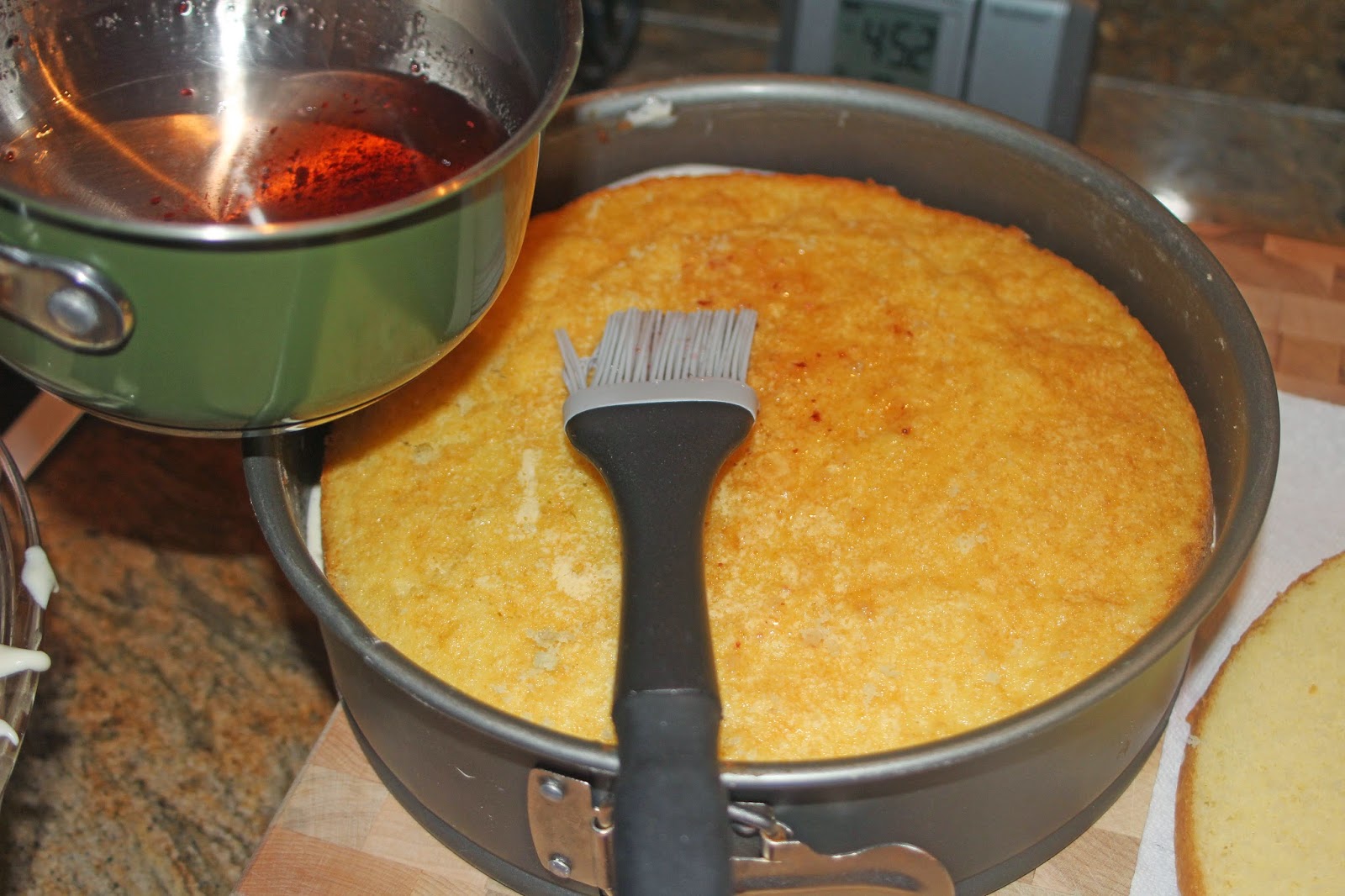 Top with sponge cake and brush generously with the rum-berry syrup. Top with the remaining pastry cream, assorted berries and whipped cream. Cover and refrigerate until the pastry cream has set. Remove the sides of the springform pan, peel off the parchment, slather on a bit of sweetened whipped cream and pack on some chopped pistachios for garnish.

1. Mix the powdered sugar and whipped cream stabilizer together in a small bowl.

2. Add cream to a medium bowl. Stir in the vanilla.

3. Beat with a hand mixer at medium speed; slowly add the powdered sugar mix and continue beating until the whipped cream holds stiff peaks but is not over beaten to an unpalatable butterlike consistency. Cover and keep in the frig until ready to use. 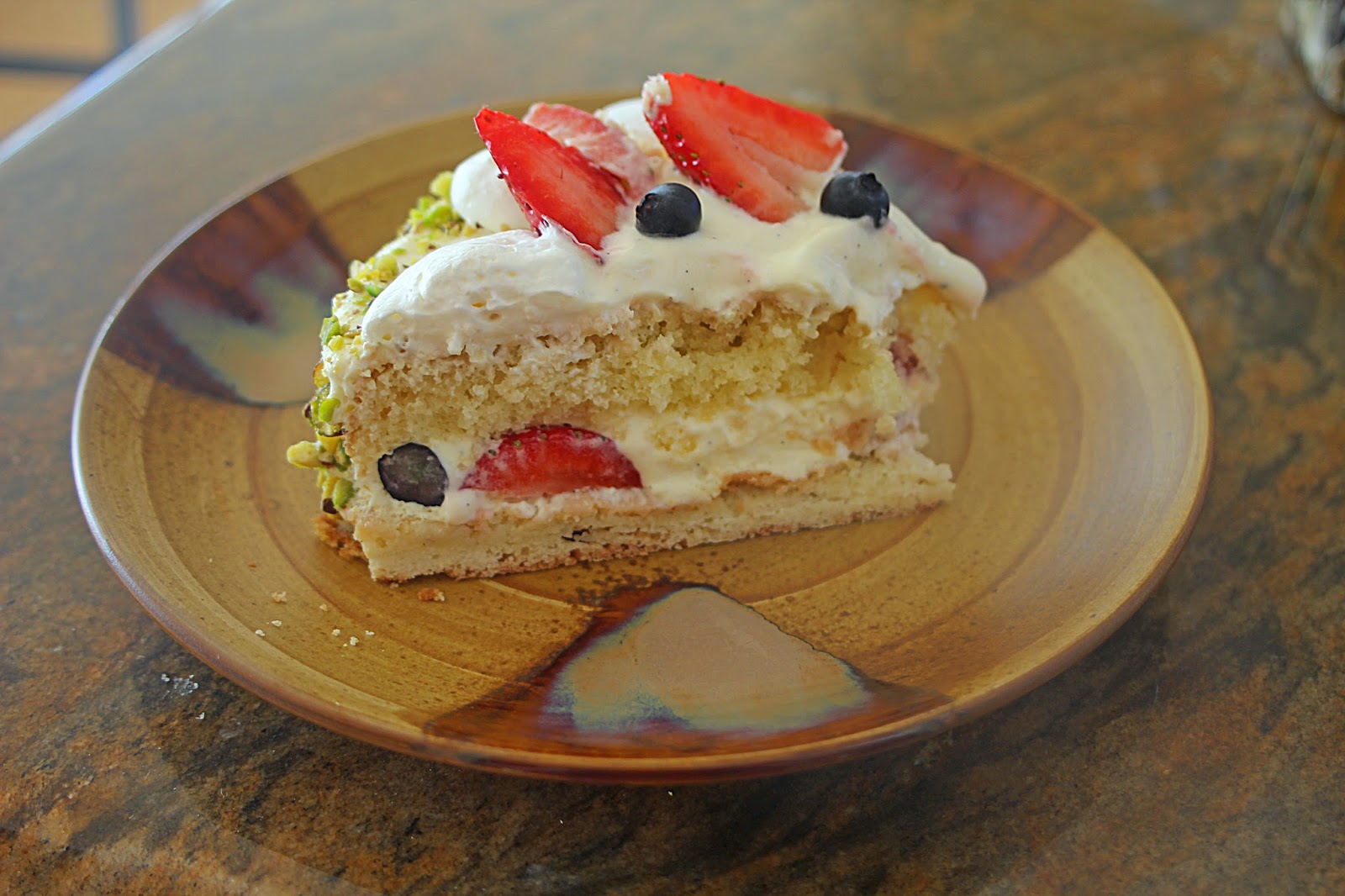 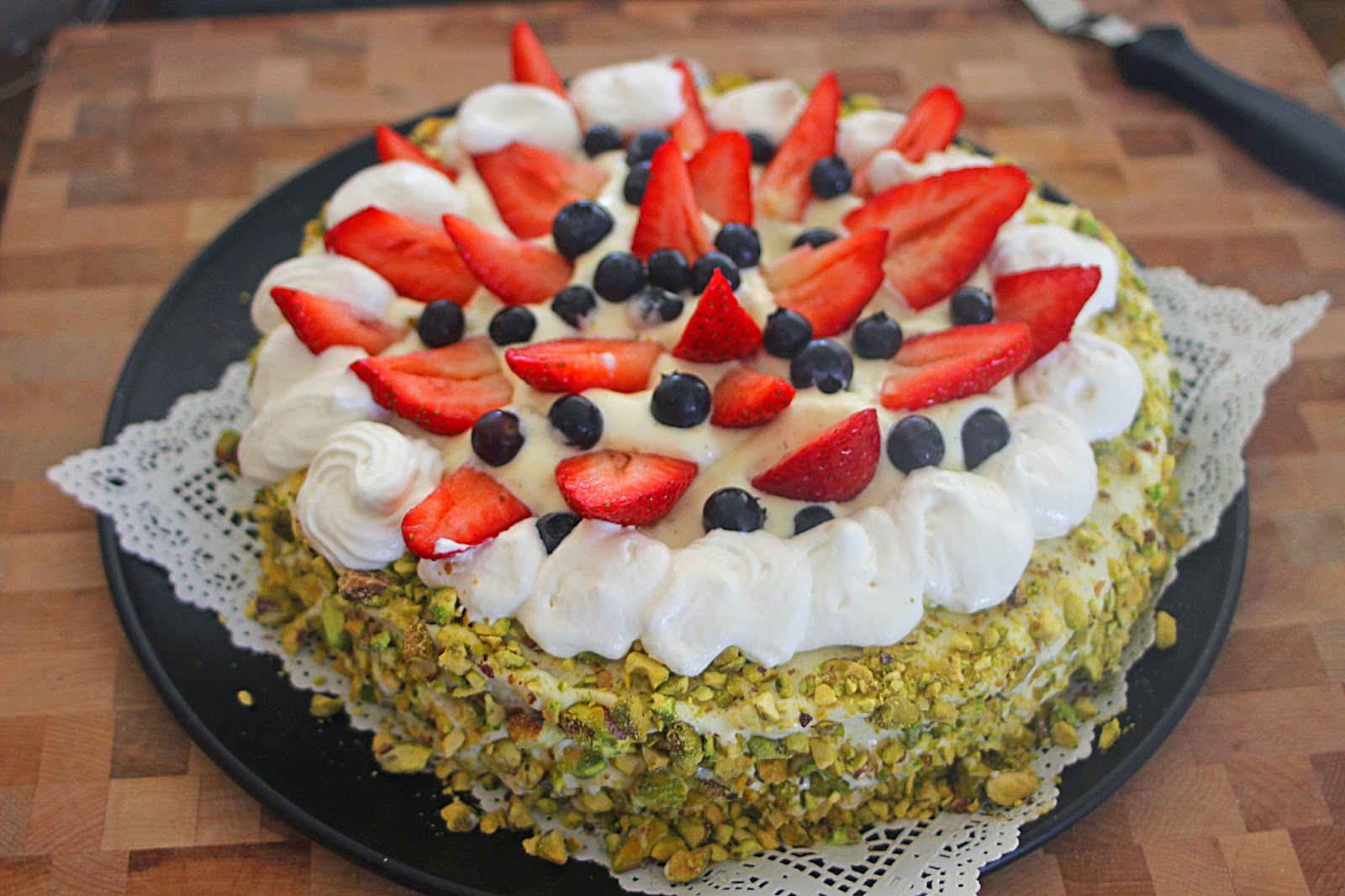