Pork balls, aka "Gong Wan," are a Taiwanese staple that are typically served in a simple broth seasoned with fried shallots, white pepper, finely chopped celery, and cilantro. I equate this dish with something uber comforting like Matzo balls in a soul-satisfying homemade chicken soup, evoking all those warm and fuzzy feelings you might get from reading anything from the Chicken Soup for the Soul series. But of course since pork can never be kosher, that's as far as I can take this analogy. Gong wan is readily available these days in most Chinese markets here in the U.S., but since I live in an area that doesn't have a significant Asian population, I decided to try my hand at making these guys at home. The ingredients are simple but it totally helps if you have a food processor and stand mixer with a paddle attachment. After 2 attempts, I still haven't perfected the recipe - the pork balls are supposed to have a "bouncy" texture if properly made, but mine still have the residual texture of a regular meatball. Nonetheless, I have to say that the flavor is pretty good and Gil happily downed all that I gave him - practice makes perfect and I'll keep on truckin.'

Here's the low-down on making a proper Gong Wan:

1. Keep the pork really, really cold at all times (in fact, it's best to partially freeze the ground pork before blending it in the food processor).

2. Adding a little iced water to the ground pork while processing loosens the mixture and gives it a better consistency.

3. Nevah evah use LEAN ground pork. Fatty is good in this case.

4. You must NOT boil the pork balls. A low simmer helps them to achieve their bouncy texture. You should only bring them to a boil during the last 10-15 seconds of cooking. 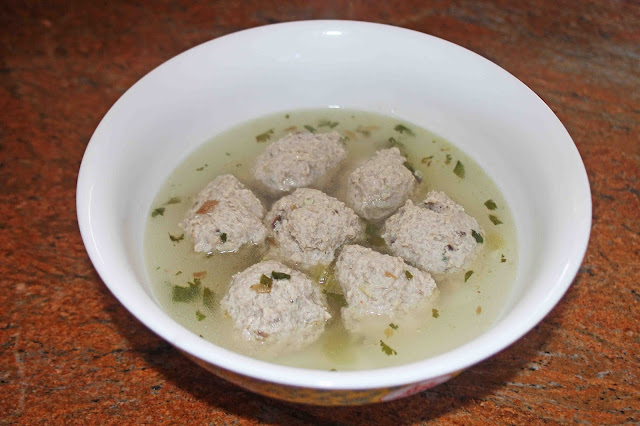 Ingredients:
2 lbs. ground pork (do not use lean), placed into two Ziploc-type bags, flattened, and frozen for 30 minutes to 1 hour before using

1. Remove the two Ziploc bags with the partially frozen ground pork from the freezer. Break up the pork from one of the bags into pieces and place into the bowl of a food processor. Process/pulse for a few seconds and add a few teaspoons of ice cold water to the mix to loosen it up. Continue blending/pulsing for up to one minute or until the mixture is very smooth and pasty. Remove to a bowl and process the second batch the same way.

2. Place the pork paste into the bowl of a stand mixer with a paddle attachment. Add the remaining ingredients then turn on the mixer to medium speed (#4 on my KitchenAid) for 20 minutes, scraping down occasionally.

3. Remove the bowl from the mixer, cover with plastic wrap, and refrigerate at least 30 minutes or even overnight.

4. In the meantime, make the soup base:

1. Combine all the soup ingredients (except for the celery) together in a medium pan; bring to a boil, then reduce heat to a simmer.

Cook the Pork Balls:
1. Take the pork paste mixture out of the frig. Using 2 spoons, scoop out a tablespoon of the pork paste and shape into a rough ball. Drop into the barely simmering broth. Continue doing the same with the remaining pork paste (you may have to do this in two batches). Once the pork balls float up to the top, simmer for about 30-60 seconds, then bring up to a boil and cook another 10-15 seconds. Remove one of the pork balls from the soup and cut in half - if the inside is no longer pink, then it's done. Remove the remaining pork balls with a slotted spoon to a bowl or plate and set aside.

Assemble the Soup:
1. Bring the soup up to a boil and add the diced celery. Cook for 10-15 seconds, then turn off the heat.

2. Place a few of the pork balls into each serving bowl and ladle in some of the soup. 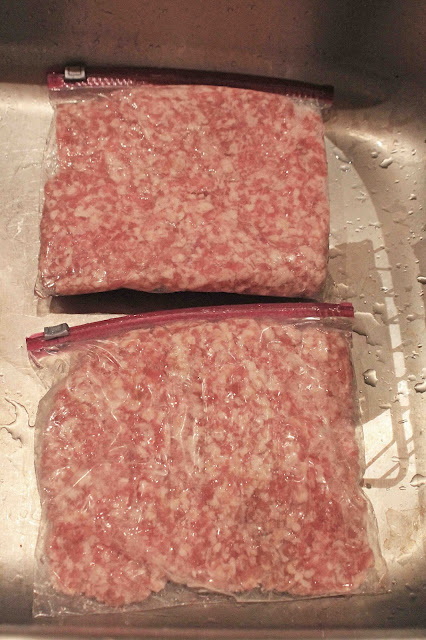 2 lbs. of ground pork, halved and each pound placed into a Ziploc bag, flattened out, and
frozen for 30 minutes to 1 hour until partially frozen. 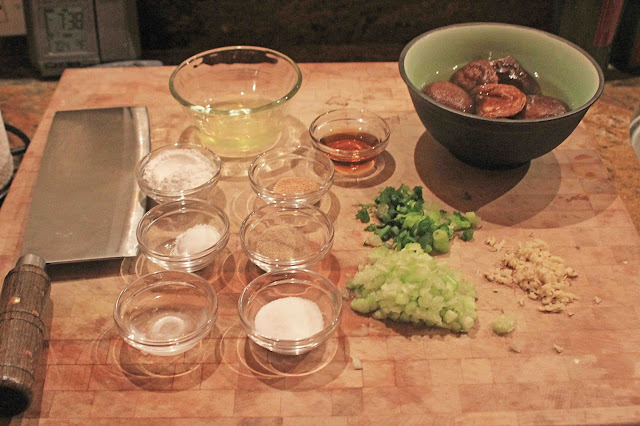 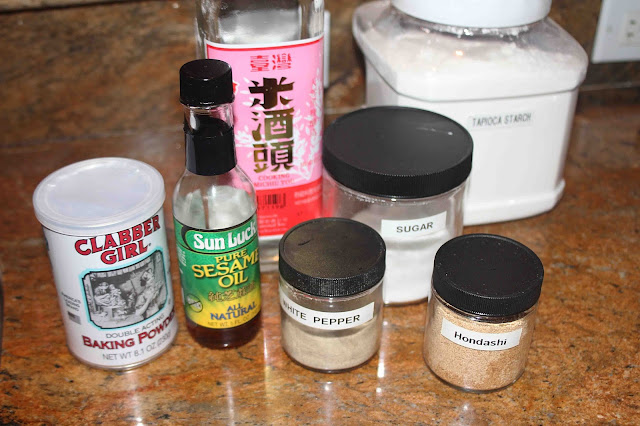 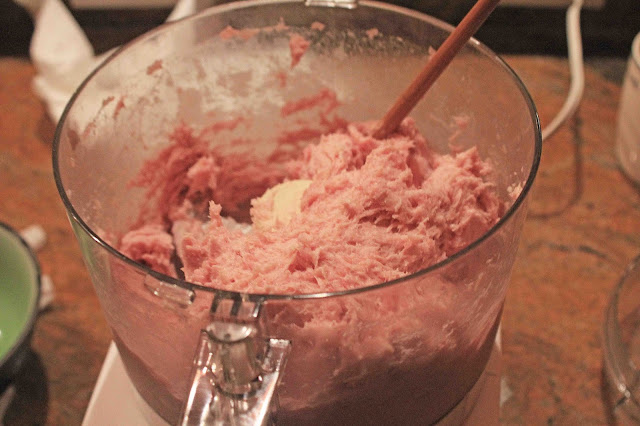 Place the semi-frozen ground pork, broken up into pieces, in a food processor. Do this in two batches (1 lb. of ground pork at a time) so as not to overcrowd the food processor's bowl.  Pulse/blend for up to one minute or until the meat is processed to a smooth paste. Feel free to add a little iced water (1 tablespoon at a time) to loosen up the ground meat while processing. 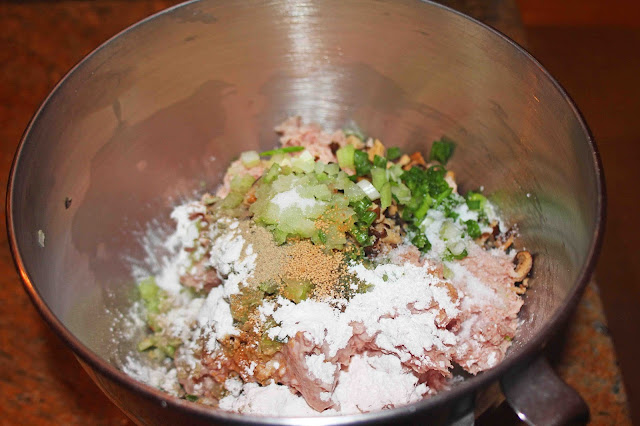 Place the pork paste into the bowl of a stand mixer along with the seasonings. Using the flat paddle attachment, blend the mixture (#4 speed on my KitchenAid stand mixer)
for 20 minutes, scraping down occasionally. 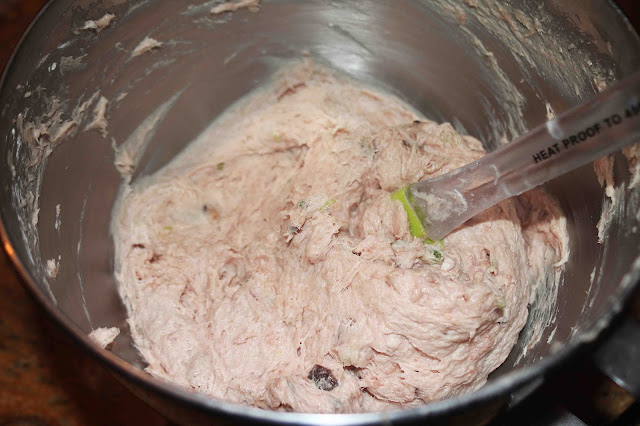 Once the mixture has reached a very smooth, paste like consistency, cover and refrigerate at
least 30 minutes (ok to refrigerate overnight). 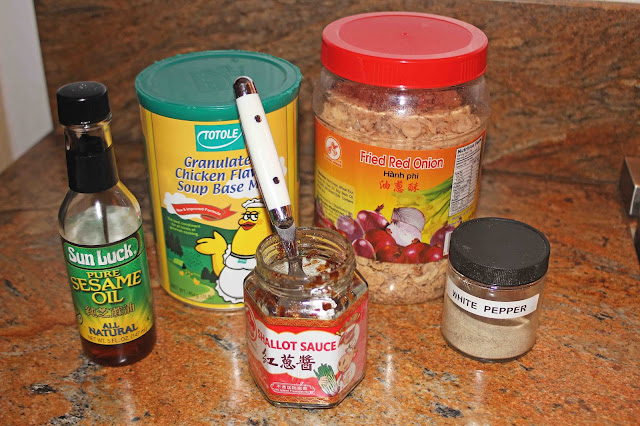 For the soup base: sesame oil, chicken powder, white pepper, fried shallot sauce/oil (you can substitute with fried shallots, aka fried red onion, like the one in the jar behind). 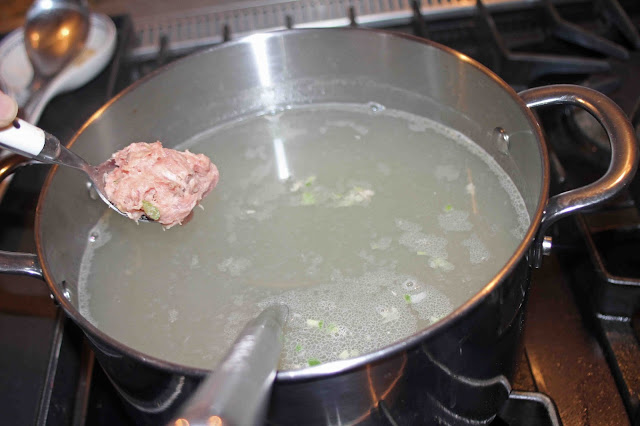 Bring the soup base to a bare simmer. Drop the meat mixture, 1 heaping tablespoon at a time,
into the simmering broth. You will probably have to cook the pork balls in two batches. 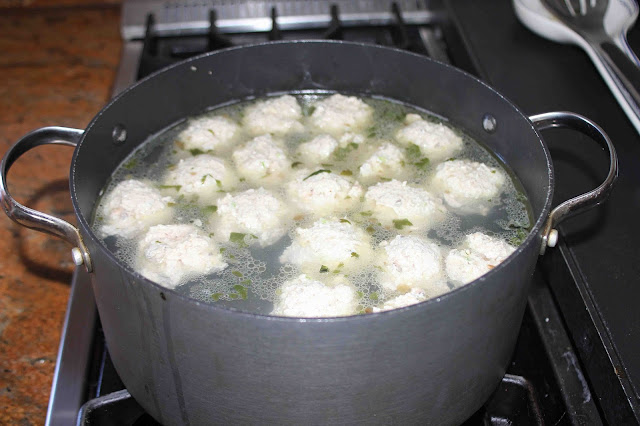 Once the pork balls float up to the top, continue simmering for 30-60 seconds.
Bring up to a boil and cook another 15-20 seconds. To test for doneness, remove one of the pork balls and cut in half. If the center is not pink, then it's done. Remove the pork balls from the broth with a slotted spoon to a plate or bowl and set aside. 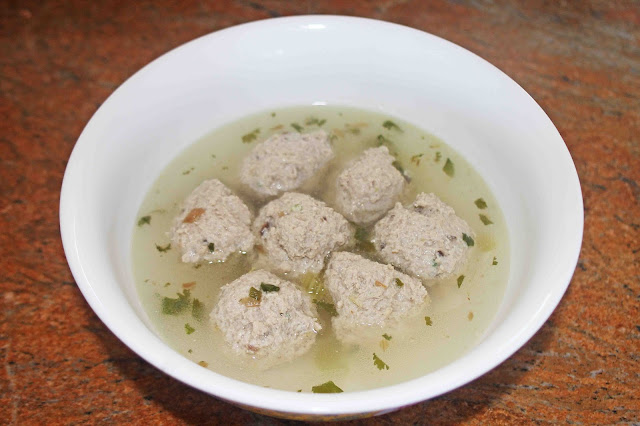 Place the pork balls into serving bowls and ladle in some of the soup.
Posted by camissonia at 8:26 PM