A frittata is like a cross between an omelette and a quiche, except there's no folding of the egg over a filling or a crust involved. They are very much like a Spanish tortilla, where the filling ingredients are combined with the beaten egg and cooked together in a skillet. Frittatas are a great way to use up whatever odds and ends you may have in your frig - assorted veggies, mushrooms, ham, bacon, other cooked meats, cheese, you name it - basically, if it works in an omelette will work in a frittata.  I recently came across a a frittata recipe with Asparagus, Spinach, Ham and Cheese by Kenji Lopez-Alt on his website www.seriouseats.com http://www.seriouseats.com/recipes/2016/07/flipped-frittata-egg-spanish-tortilla-asparagus-ham-spinach-cheese.html and adapted it here. Easy peasy, delicious, chock full of veggies and very satisfying! 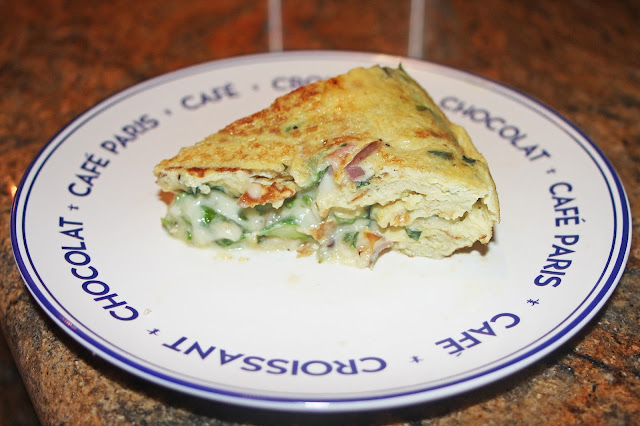 1. Heat 1 tbsp. olive oil in a saute pan over medium high heat. Add the sliced asparagus and shishito peppers, season lightly with salt and pepper, and saute for about 2 minutes. Remove to a bowl and set aside.

2. Add another tbsp. of olive oil to the same pan and saute the sliced onions over medium high heat until lightly browned, about 2 minutes. Stir in the minced garlic and cook another minute. Add the chopped spinach and saute briefly until just wilted. Add mixture to the bowl with the reserved asparagus and shishito peppers. Let cool about 8-10 minutes.

3. In a large bowl, beat the eggs with 1/8 tsp. kosher salt and 1/2 tsp. pepper. Stir in the slightly cooled veggie mixture (if too hot, the eggs will scramble).

4. Stir in the diced ham and cheese.

5. Add 2 tbsp. olive oil to a frittata pan or skillet (a frittata pan is composed of two skillets, one which interlocks over the other for easy flipping - if you don't have one of these, just use a plate or platter on top of the pan to flip the frittata over). Heat the oil over medium high, then add the egg mixture, swirling the mixture until the bottom and sides start to set, about 3-4 minutes. Cook another 3 minutes or until the bottom starts to brown, adjusting the heat to prevent the bottom from burning.

6. Flip the frittata over and press down with a spatula. Cook another 2 minutes and carefully lift the edges with an offset spatula to check the bottom. Continue cooking, adjusting heat as needed to prevent burning. Once the bottom has set and is lightly browned, flip the frittata over again and press down the middle with a spatula. Repeat this process another one or two times until the center, when pressed down, is set and doesn't have any more runny eggs coming out.

7. Plate the frittata, cut into wedges and serve. Can also be served at room temperature. 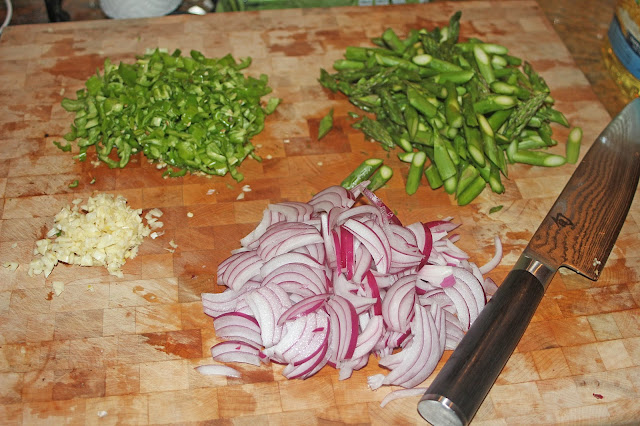 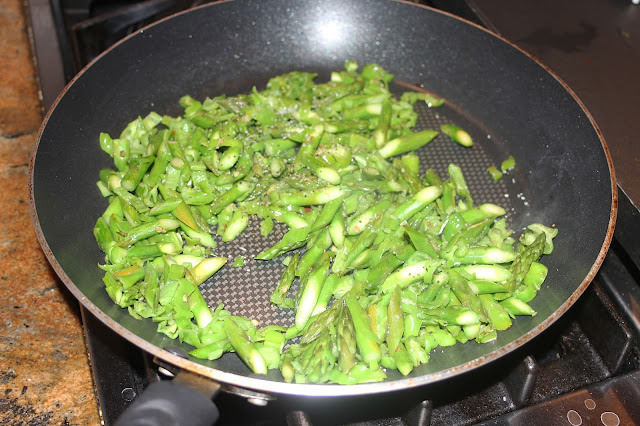 Saute asparagus and shishito peppers in 1 tbsp. olive oil; season lightly with salt and pepper; remove  to a bowl and set aside. 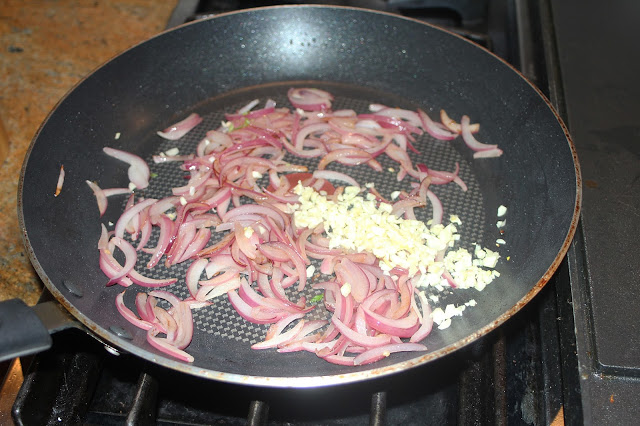 Add another tablespoon of olive oil to the same pan & saute the onions until lightly browned, about 2 minutes. Stir in the chopped garlic and cook another minute. 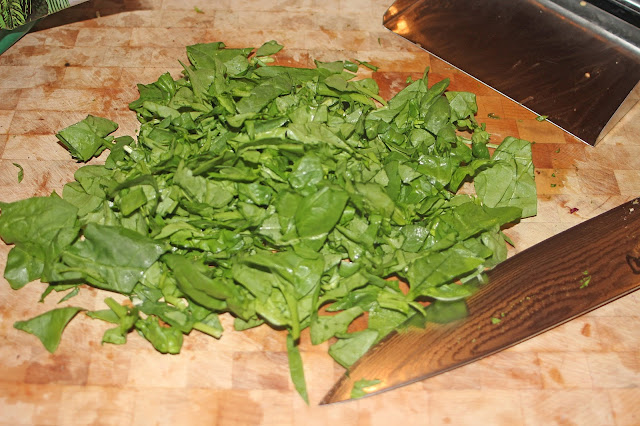 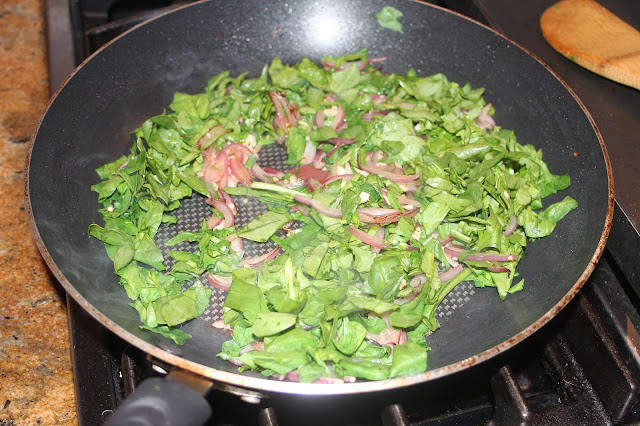 Add the chopped spinach to the onion mixture and stir-fry briefly until just wilted. Add to the bowl with the shishitos and asparagus; set aside for about 10 minutes to let cool a bit. 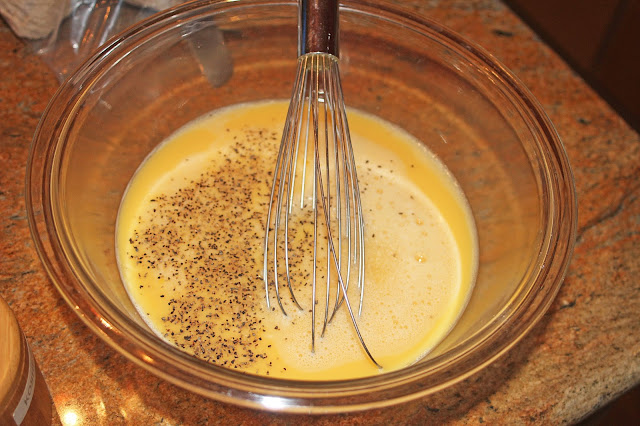 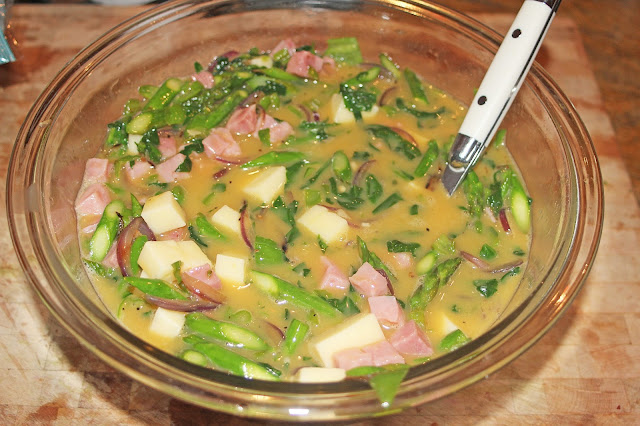 Stir the veggie mixture into the beaten eggs, along with the diced ham and cheese. 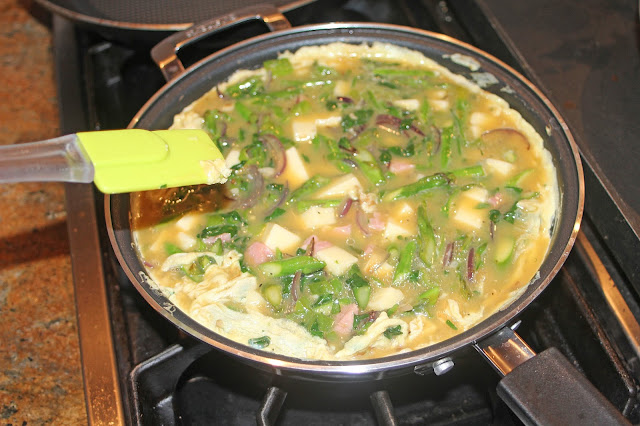 Heat 2 tbsp. olive oil in a frittata pan and pour in the egg mixture. Shake pan to swirl the egg mixture, using a rubber spatula to lift the sides to check the browning on the bottom. 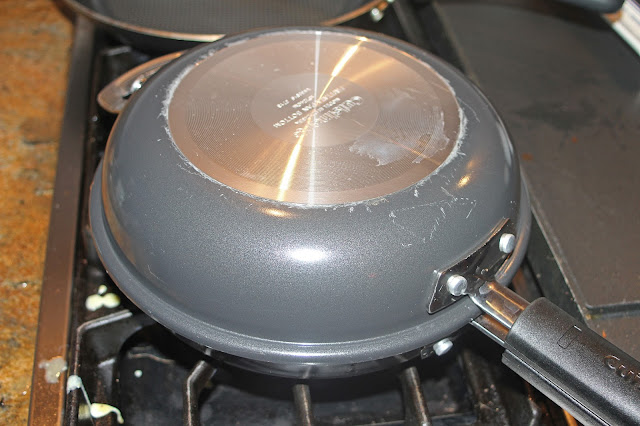 Attach the interlocking second part of the frittata pan over the egg (if you don't have a frittata pan, you can use a large platter instead), and quickly flip frittata over. 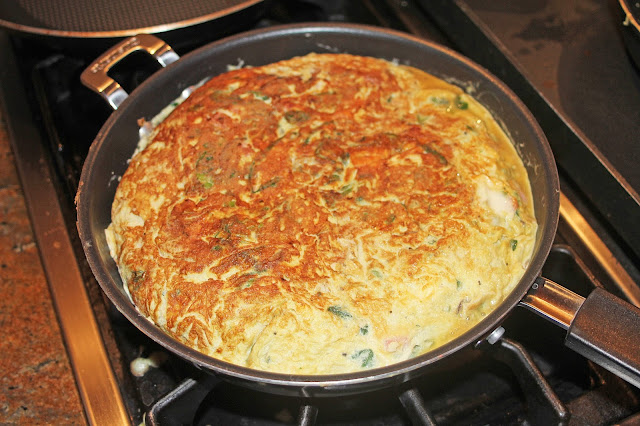 Continue cooking the frittata on the other side, adjusting heat as needed. 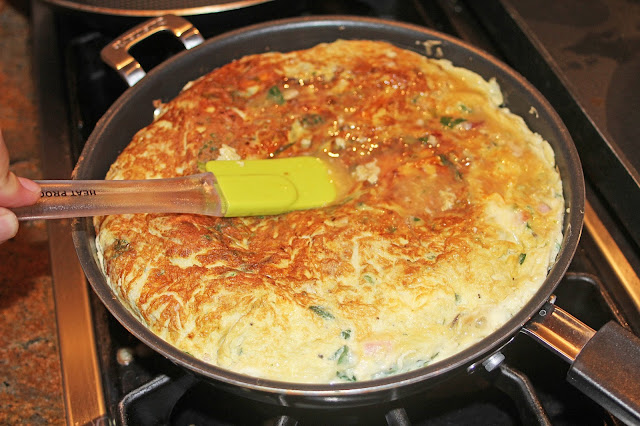 Press the center of the frittata occasionally to release any runny eggs in the center. Repeat this process (flipping the frittata and pressing down on the center) one or two more times or until both sides are nicely browned and the center is just set. 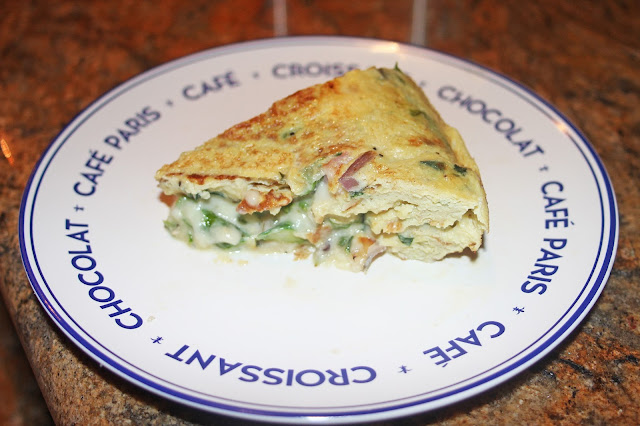 Slice and serve warm or at room temperature.
Posted by camissonia (Arleen) at 6:06 PM