I'd never heard of Mississippi Roast until I read Sam Sifton's piece on it in the New York Times food section a couple weeks ago. Apparently, about 15 years ago, a woman from Mississippi by the name of Robin Chapman made a pot roast in her slow cooker seasoned with only a packet of Ranch dressing, a packet of "au-jus" brown gravy mix, some pepperoncinis and a stick of butter. Yup - no veggies or aromatics, no liquid - just the beef and those 4 aforementioned ingredients. The recipe became hugely popular and passed along by home cooks, bloggers, housewives and others via Pinterest, Twitter, FB, etc. Here's a link to Sam Sifton's article "The Improbable Rise of Mississippi Roast:" http://www.nytimes.com/2016/01/27/dining/mississippi-roast.html?_r=0

I was really skeptical of this dish because the combination of ingredients sounded totally weird and incongruous in more ways than one (and then, Dios mio, you don't even have to brown the meat first!). But I gave it a go anyways and, well, I have to say I was pleasantly surprised by how good it turned out. I took Sam Sifton's tip by using more pepperoncinis and less butter. I also added a few carrots and garlic cloves for extra sweetness and slow cooked everything in a Dutch oven rather than using a slow cooker. This one's a keeper, especially if you're feeling kinda lazy and don't want to spend a ton of time on prep. Just try it. You'll like it. Trust me. 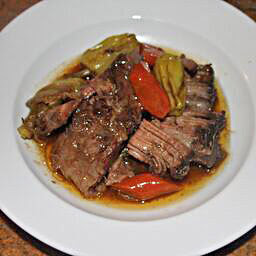 2. In a large Dutch oven or oven-proof pot, distribute the chopped carrots and garlic cloves evenly over the bottom. Place the chuck roast on top of the carrots.

3. Sprinkle the packet of brown gravy mix and packet of Ranch dressing evenly over the top of the roast.

4. Place the pepperoncinis and butter on top.

5. Cover the pot and place in the oven. Roast low and slow for 3-4 hours or until the roast is very tender and juices have formed.

6. Serve as is or with some pasta or roasted potatoes on the side. Garnish with chopped parsley. 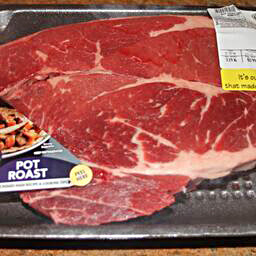 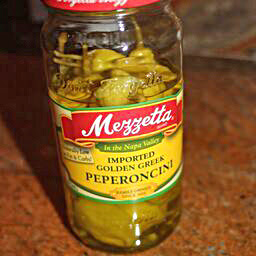 Jarred pepperoncinis.
If you're not a fan of pepperoncinis, feel free to use less, but don't use none. Got it? 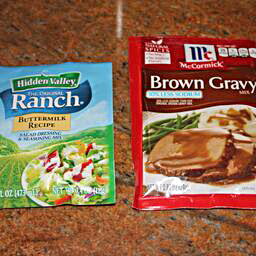 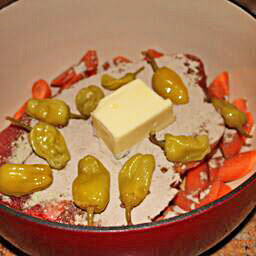 Place the roast on top of the chopped carrots and garlic, sprinkle with the
Ranch dressing and gravy packets, arrange the whole pepperoncinis on top,
and top with the butter. 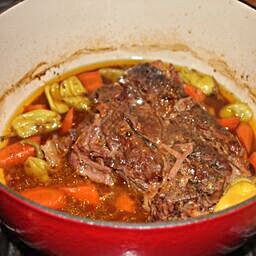 Cover and roast at 250F for 3-4 hours or until the beef is super tender. 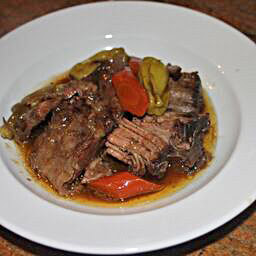 Posted by camissonia at 3:51 PM