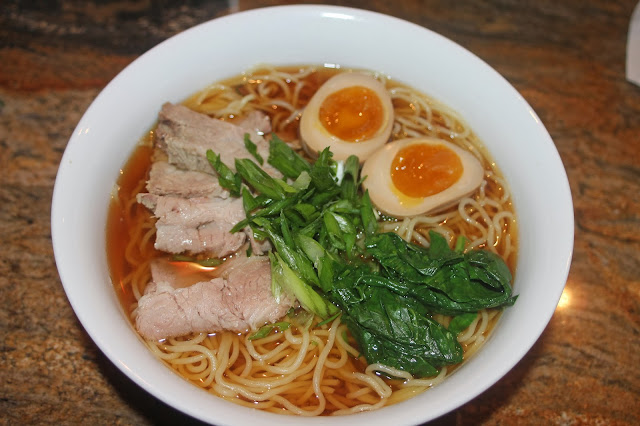 If you think ramen is that dried cup-of-noodle stuff that you used to stock up on in your college days of yore, well, you'd be partially right. But in Japan, ramen is whole nother animal and literally a national obsession with many regional iterations in terms of the type of noodles used (could be egg or wheat, but always fresh) and the underlying soup stock (soy/shoyu, Shio, miso, curry, etc., etc.). Luckily, there are a number of really good and authentic ramen noodle joints from CA to NY, so we're not exactly deprived of this delectable Japanese street/home-style offering. I used to buy ramen from 99 Ranch Market which came prepackaged with the egg noodles and soup base, and it was pretty good. But, it wasn't until I came across the cookbook Japanese Soul Cooking: Ramen, Tonkatsu, and More from the Streets and Kitchens of Tokyo and Beyond by Tadashi Ono (a New York-based chef) and Harris Salat that I was inspired to try my hand at making a basic shoyu (soy sauce-based) ramen soup from scratch. It wasn't as daunting as I thought it would be and the end result was simply delicious! You just have to do this dish in steps: first make the soy sauce eggs, then the master broth, then the soy sauce tare, cook the noodles, and finally assemble the dish. I made just some minor adaptations to the cookbook's recipes, such as adding dried bonito flakes to the soy sauce tare, and then incorporated my version of Takashi Yagihashi's recipe for braised pork belly (from his cookbook Takashi's Noodles). 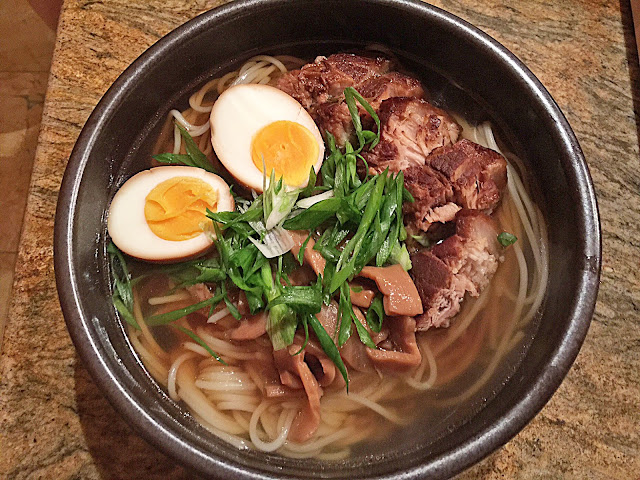 1. Bring a medium pan of water to a boil over high heat, then reduce heat to medium.

2. Prick the bottom of each egg carefully with a pin to make a small hole.

3. Place the eggs into the boiling water and cook for approximately 7 minutes (for a soft-boiled egg). Using a spoon or other utensil, swirl the eggs around the pan for the first couple of minutes of cooking to help the yolks stay centered inside the eggs.

4. Remove the pan from the heat and immediately place under cold running tap water to stop the cooking. Let the eggs cool completely and then peel.

6. Add the peeled eggs to the tare, making sure the eggs are completely submerged. Cover and marinate for 2-3 hours (no longer, or else the eggs will be too salty). Remove the eggs from the tare. If not using right away, place the tare in a container, cover and refrigerate until ready to use. Freeze any leftover tare for future use.

1. Place all the ingredients into a saucepan. Bring to a boil over high heat.

2. Turn off the heat and set aside. Strain before using. 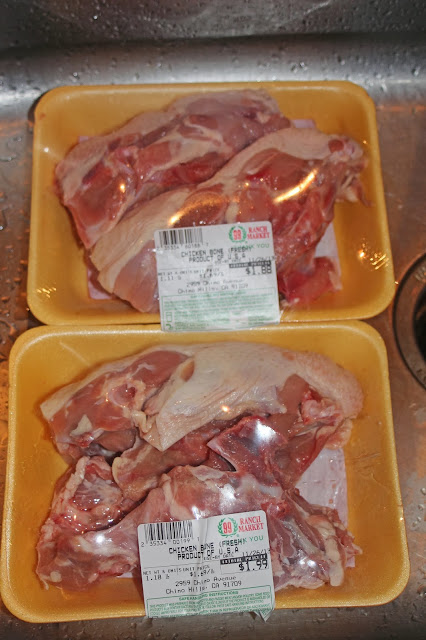 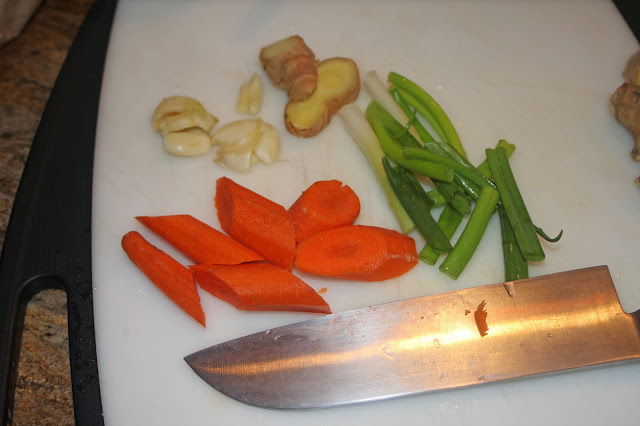 For the soup base: carrots, scallions, ginger and smashed garlic. 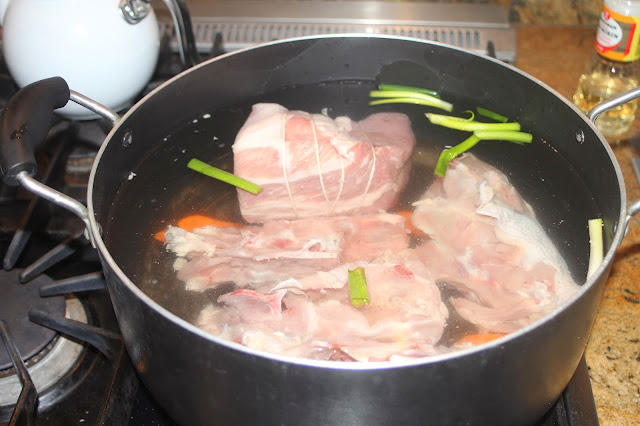 Add the carrots, scallions, ginger, smashed garlic, chicken wings and parts and pork bellies into a large pan and bring to a boil over high heat. Reduce heat and simmer, uncovered for 1 hour, skimming off any scum that forms on top. 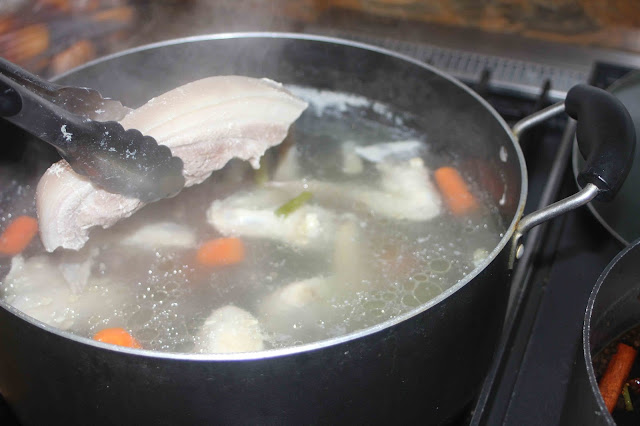 Remove the pork bellies to a plate and set aside.

Continue cooking the chicken wings and parts in the broth another hour or until the liquid has reduced by about 1/3. Strain the broth through a sieve (discard the chicken parts & veggies) and let cool.

In the meantime, make the soy braising sauce for the pork bellies: 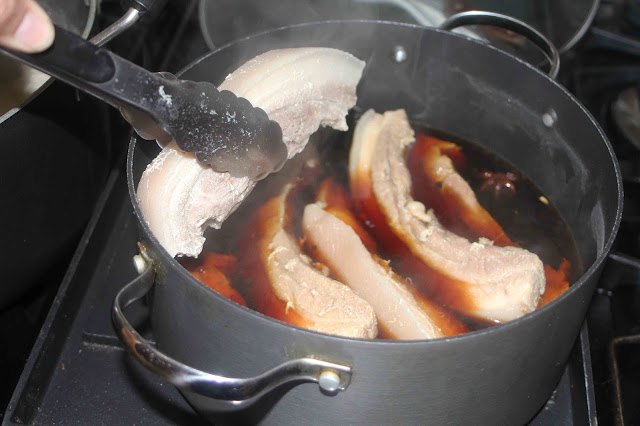 Combine the soy braising liquid ingredients together in a medium pan, then add the reserved cooked pork bellies. 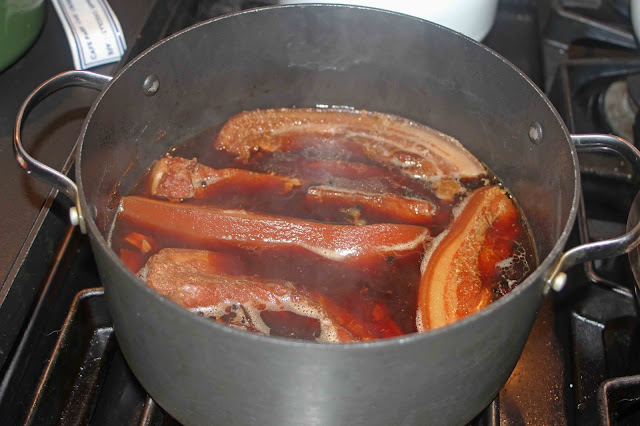 Bring to a boil, reduce heat, cover, and simmer for 1 1/2 to 2 hours or until the pork bellies are very tender. Turn off heat and set aside.

1 lb. spinach, blanched in boiling water about 1 minute, then rinsed under cold water

1. Bring a large pot of water to a boil. Blanch the spinach 1 minute, then remove to a colander and rinse under cold water to stop the cooking. Squeeze or blot dry with paper towels, remove to a chopping board and cut into 2" sections.

2. In the meantime, slice the braised pork bellies into thin slices and cut each soy sauce egg in half; set aside.

3. Place the ramen soup base in a pot and bring up to a boil, then reduce heat and keep on a low simmer.

4. Bring the water for the spinach back up to a boil, add the noodles and cook 2-3 minutes or according to package instructions. Turn off heat and drain the noodles into a colander.

5. Place 1/2 cup of the Soy Sauce Tare and 2 cups of hot ramen soup base into each serving bowl (should make 4 servings). If you have stone/ceramic bowls that can be heated directly over a burner, I highly recommend using these to keep the broth piping hot. Place each bowl of broth/tare over a burner and bring up to a boil over medium high heat. Divide the noodles between the bowls and top with several slices of the pork, some spinach, 1 soy sauce egg (halved), sliced scallions and pickled bamboo/Menma (optional). Remove the bowls carefully from the burners using oven mitts and place on heat proof plates. Serve immediately! 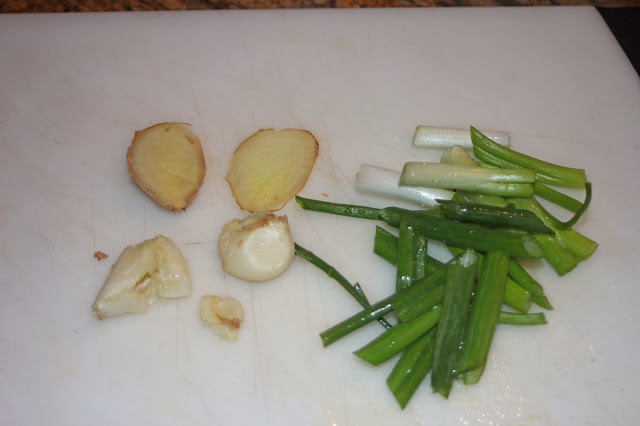 For the Soy Sauce Tare: garlic, ginger and scallions. 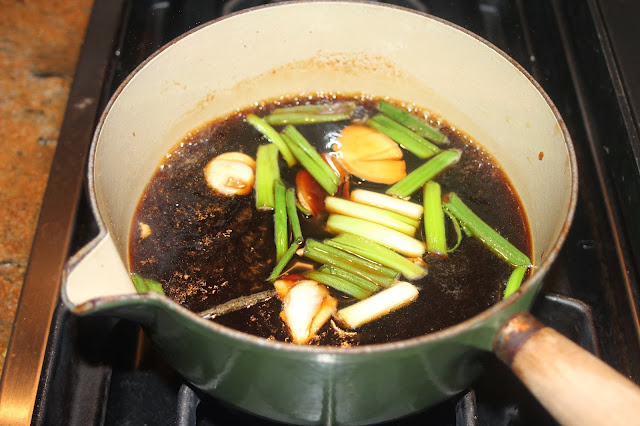 Combine all the Soy Sauce Tare ingredients into a saucepan, bring to a boil, then turn off the heat and set aside. 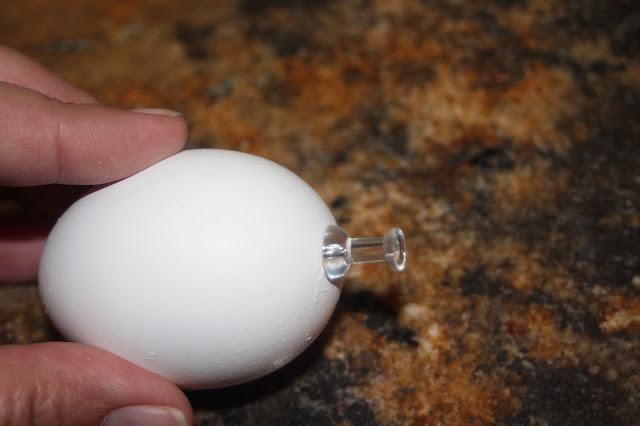 Using a pin, gently poke a small hole into the bottom (rounded end) of each egg. This will prevent the shell from sticking to the egg when you peel it after it's been boiled. 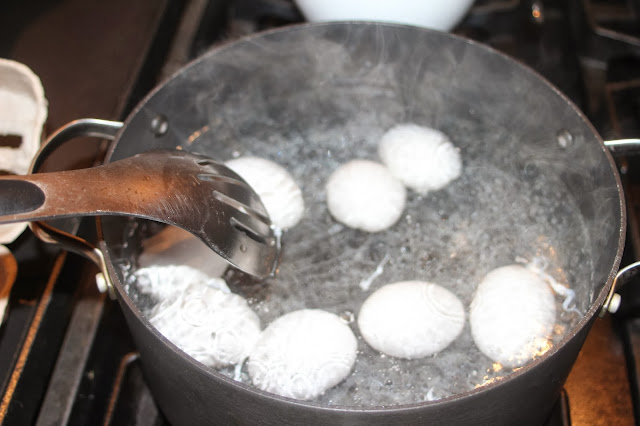 Bring water to a boil, add the eggs, swirl continuously for the first 2 minutes (to keep the yolks centered in each egg), then boil another 5 minutes. 7 minutes of cooking should yield soft yolks. 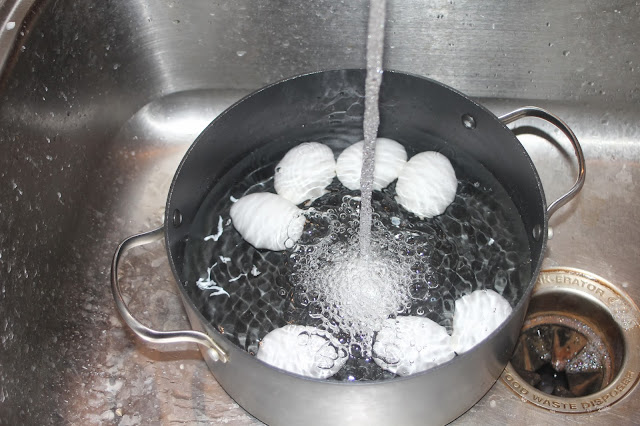 Rinse the eggs under cold water, then let cool completely before peeling. 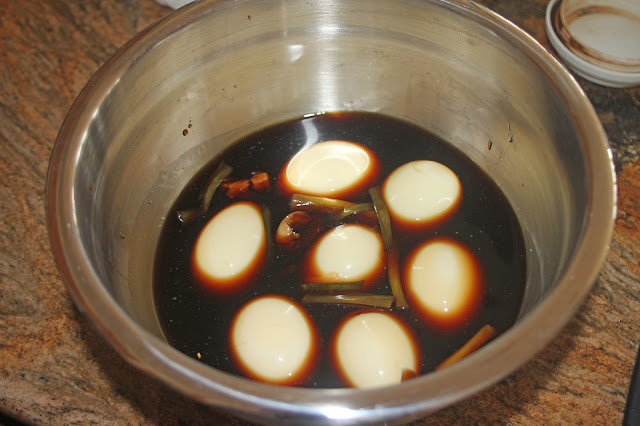 Add the peeled eggs to the cooled soy sauce tare. Cover and marinate 2-3 hours and remove the eggs from the marinade (don't leave in any longer or the eggs will become too salty). If not using the tare right away, cover and refrigerate or even freeze. 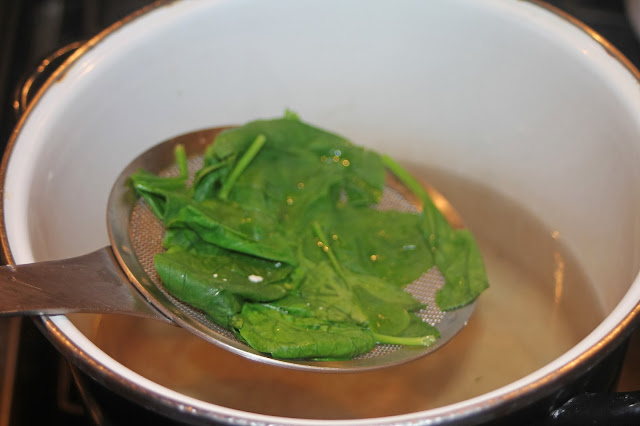 Bring a large pot of water to boil and blanch the spinach 1 minute, then rinse under cold water to stop the cooking. Squeeze or blot dry and cut into 2" sections. Set aside. 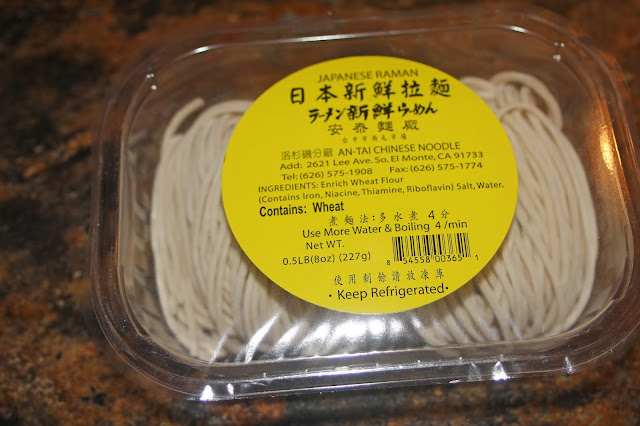 These are wheat noodles. I myself prefer the egg-based noodles which, if I can't find, I will substitute with Yakisoba noodles which are readily available in most American supermarkets. 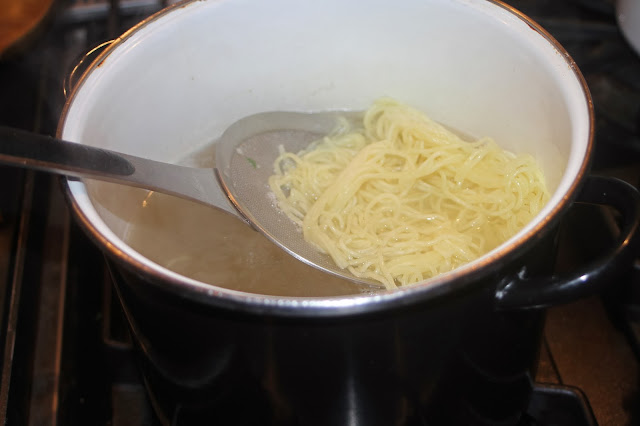 Bring the pot of water used for blanching the spinach back up to a boil. Cook the noodles 2-3 minutes (if using Yakisoba, it only takes about 20 seconds, since these noodles are actually meant for stir-frying rather than for soup). Drain the noodles in a colander. 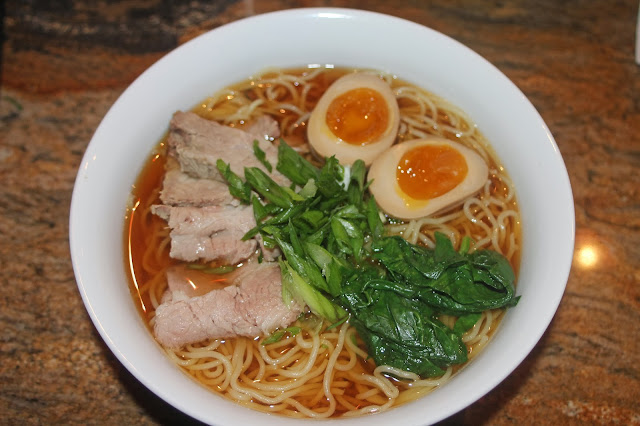 To assemble: Place 1/2 cup of soy sauce tare, 2 cups of hot ramen soup base into each bowl. Divide the noodles between the bowls and top with a few slices of the sliced pork, spinach, scallions, Menma (pickled bamboo, if you can find it) and a halved soy sauce egg. Serve immediately while the soup is still piping hot! 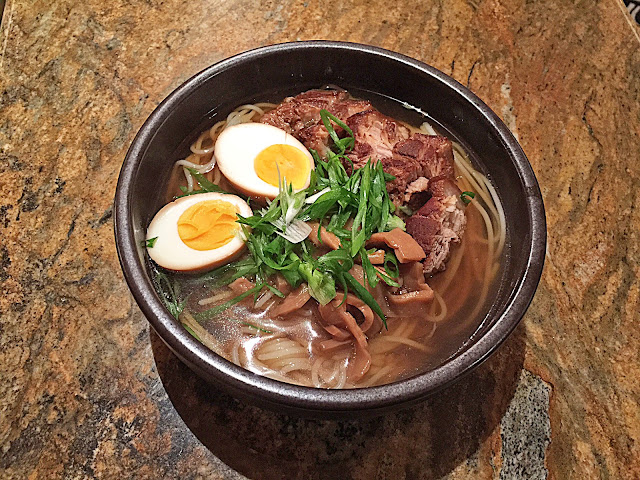 Here it is served in a stone pot, which keeps the soup piping hot.