Wow, I can't say enough about Tadashi Ono & Harris Salat's cookbook Japanese Soul Cooking. Awesome, awesome, awesome!!! My shoyu ramen recipe was adapted from theirs, and everything else I've ever made from their cookbook has been simple, easy to execute, and ridiculously delish!

Here's the prelude to their recipe: "This is a Western-style hunk of prime beef, but with a Japanese flair. The steak is topped with onions that have been reduced and caramelized with Japanese seasonings and cut with rice vinegar...We adapted this steak from the original recipe of the Imperial Hotel in Tokyo, one of Tokyo's oldest and classiest hotels. In 1936, a Russian opera star named Feodor Chaliapin was a guest there, and requested a tender steak. The chef complied, with this dish. The bass virtuoso was delighted and so apparently, was the hotel, which promptly put it o the menu."

My version was to use 1 tbsp. butter and 1 tbsp. olive oil to cook the onions & garlic (rather than 2 tbsp. of butter only), and cook the mixture down over medium low heat for 30 minutes rather than just 8 minutes to achieve a nice caramelized color. As for cooking the steaks, I used 1 tbsp. butter and 1 tbsp. olive oil rather than just 1 tbsp. of butter, cuz there was simply not enough oil in the pan for the steaks to get a proper sear. You can always drain the oil from the steaks apres cooking. Just sayin' 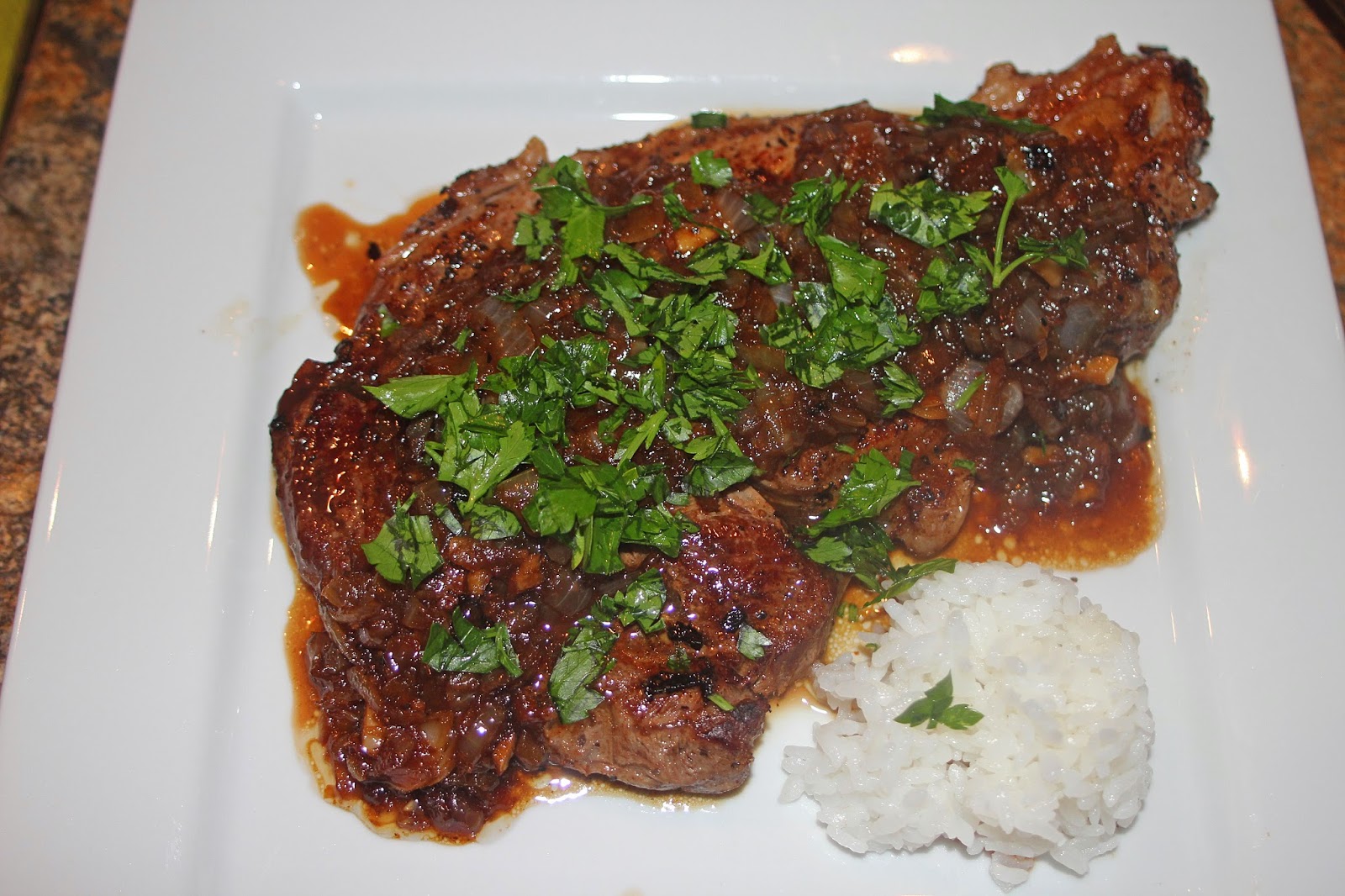 1. Tenderize steaks by pounding with a meat mallet or back of a cleaver until about 3/4-1" thick. Season both sides with salt and pepper.

2. Melt 1 tbsp. butter and 1 tbsp. olive oil in a skillet over medium to medium high heat. Add the onion and garlic and stir frequently for 10-3o minutes until the onion has caramelized.

3. Add the mirin and soy sauce and cook for 1 minute. Add the rice vinegar, stir briefly, then transfer to a bowl and set aside.

4. Melt 1 tbsp. butter and 1 tbsp. olive oil in a large sauté pan. Season the steaks with salt and pepper and cook 3 minutes per side for medium - medium rare. Remove to cutting board and let rest at least 5 minutes.

5. Bring the pan back up to heat over medium high and add onion mixture. Stir for 10 seconds and set aside.

6. Plate the steaks on individual serving platters. Top with the onion mixture, garnish with chopped parsley, and serve with steamed white rice. 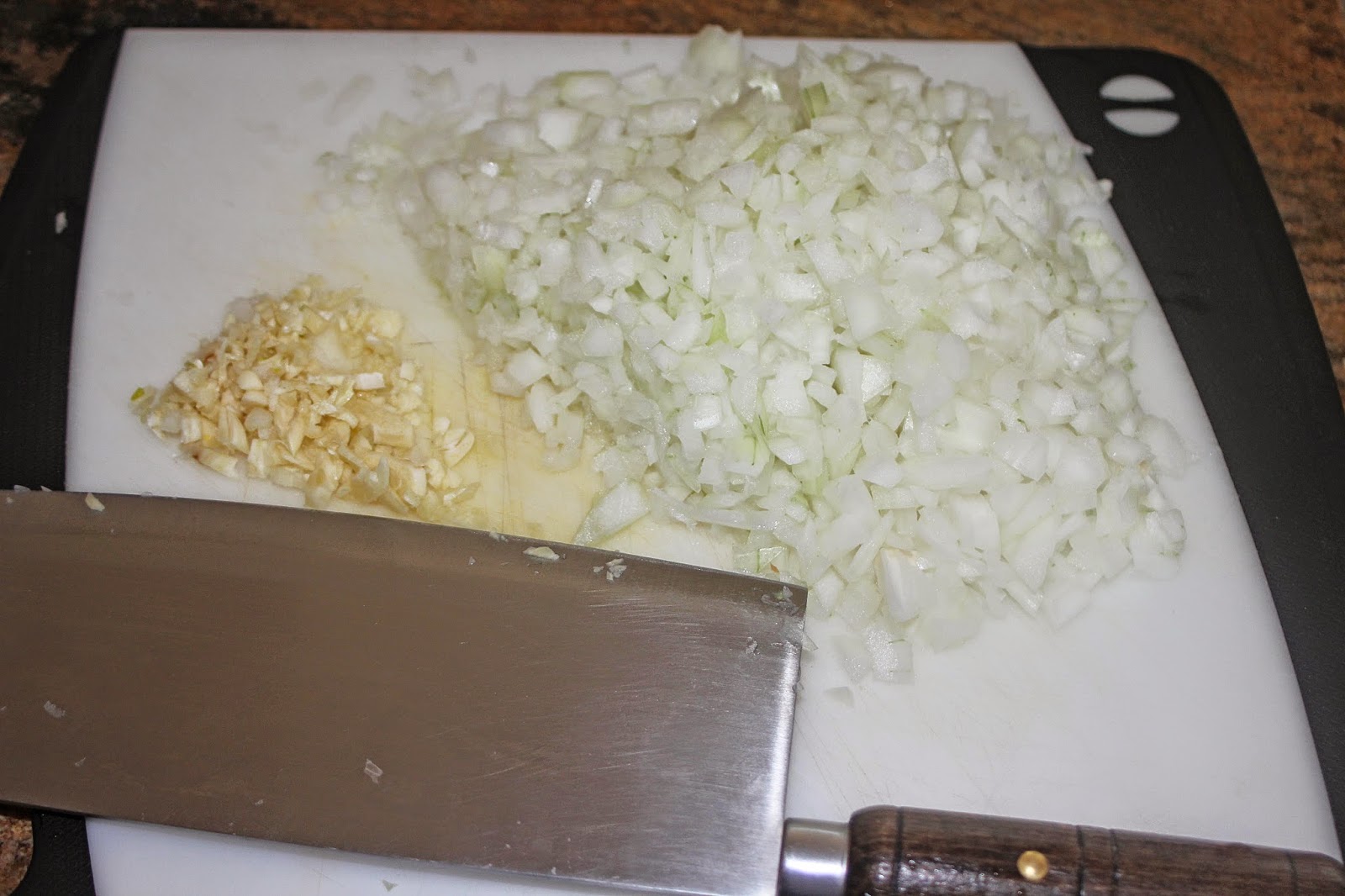 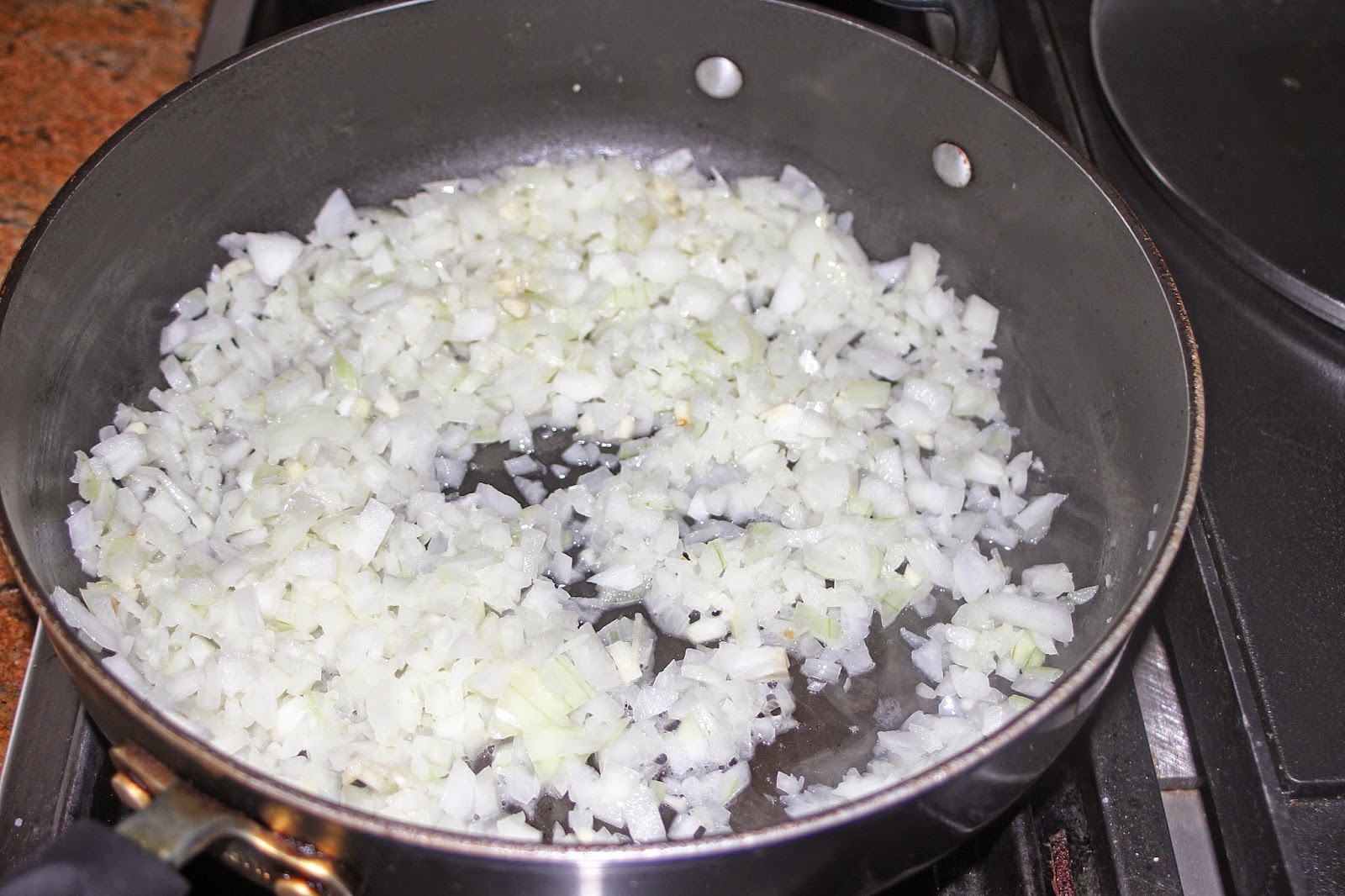 Saute the onion and garlic in 1 tbsp. olive oil and 1 tbsp. butter. 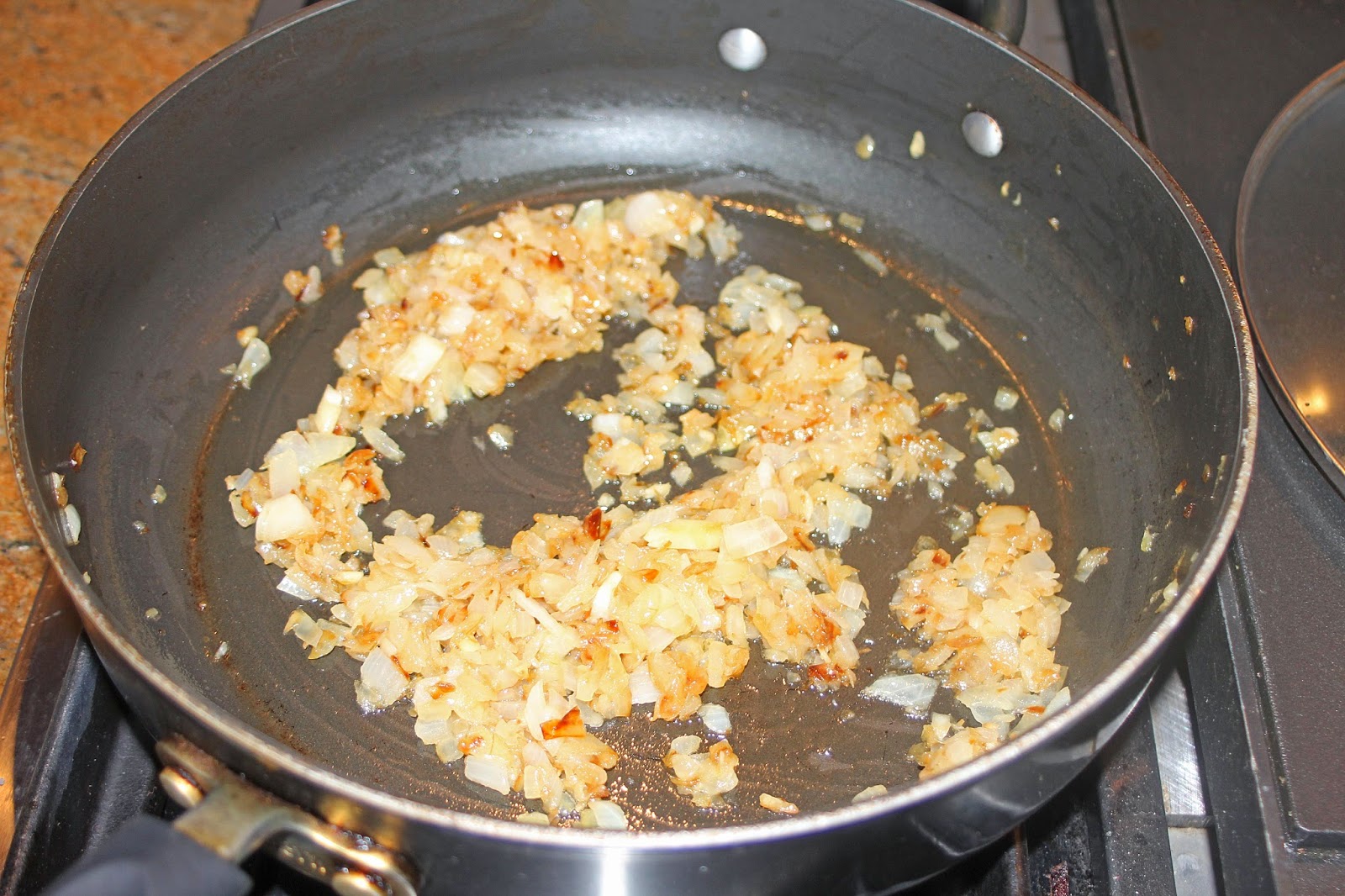 Mixture is caramelized after about 30 minutes of low, slow cooking. 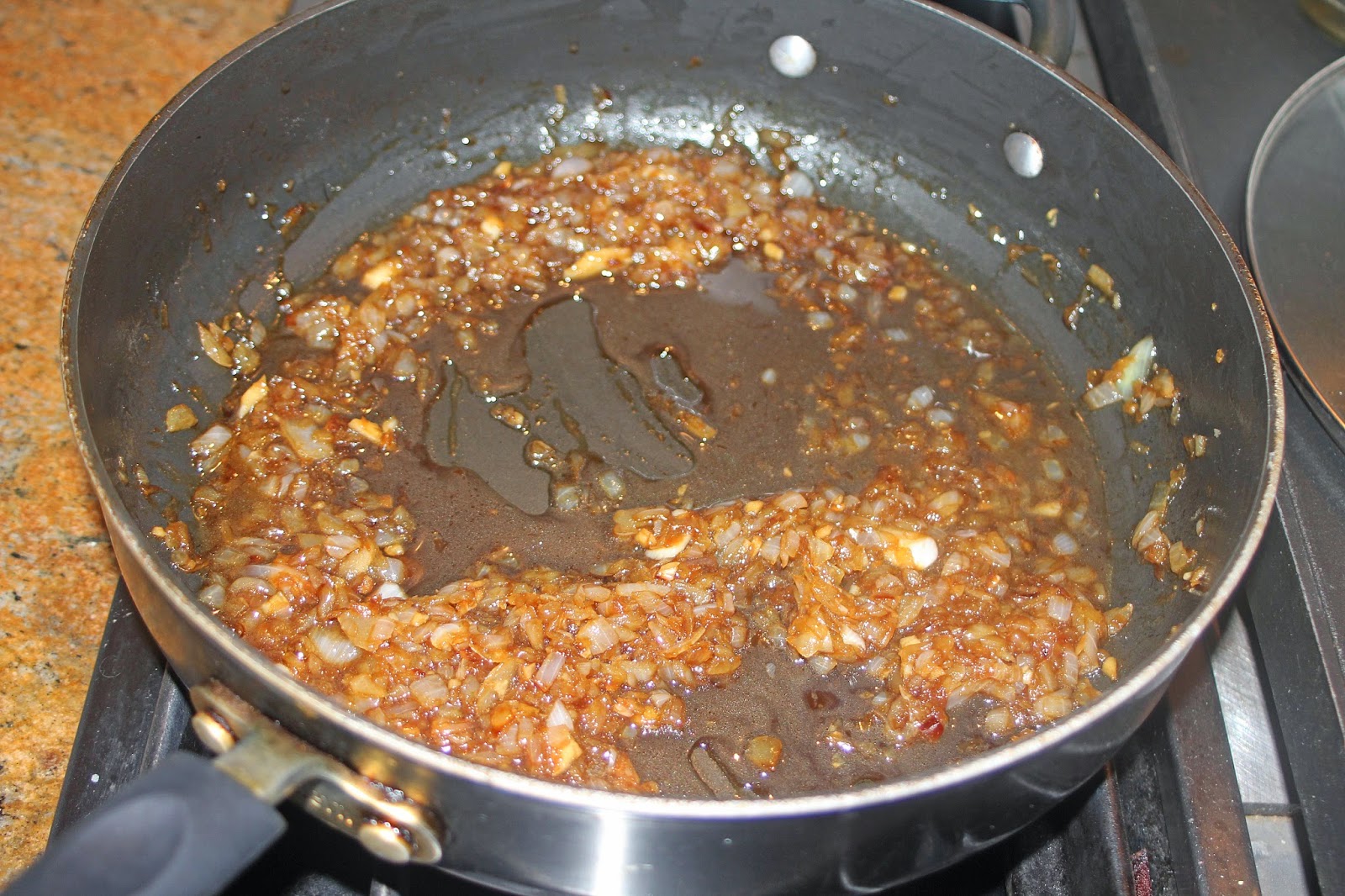 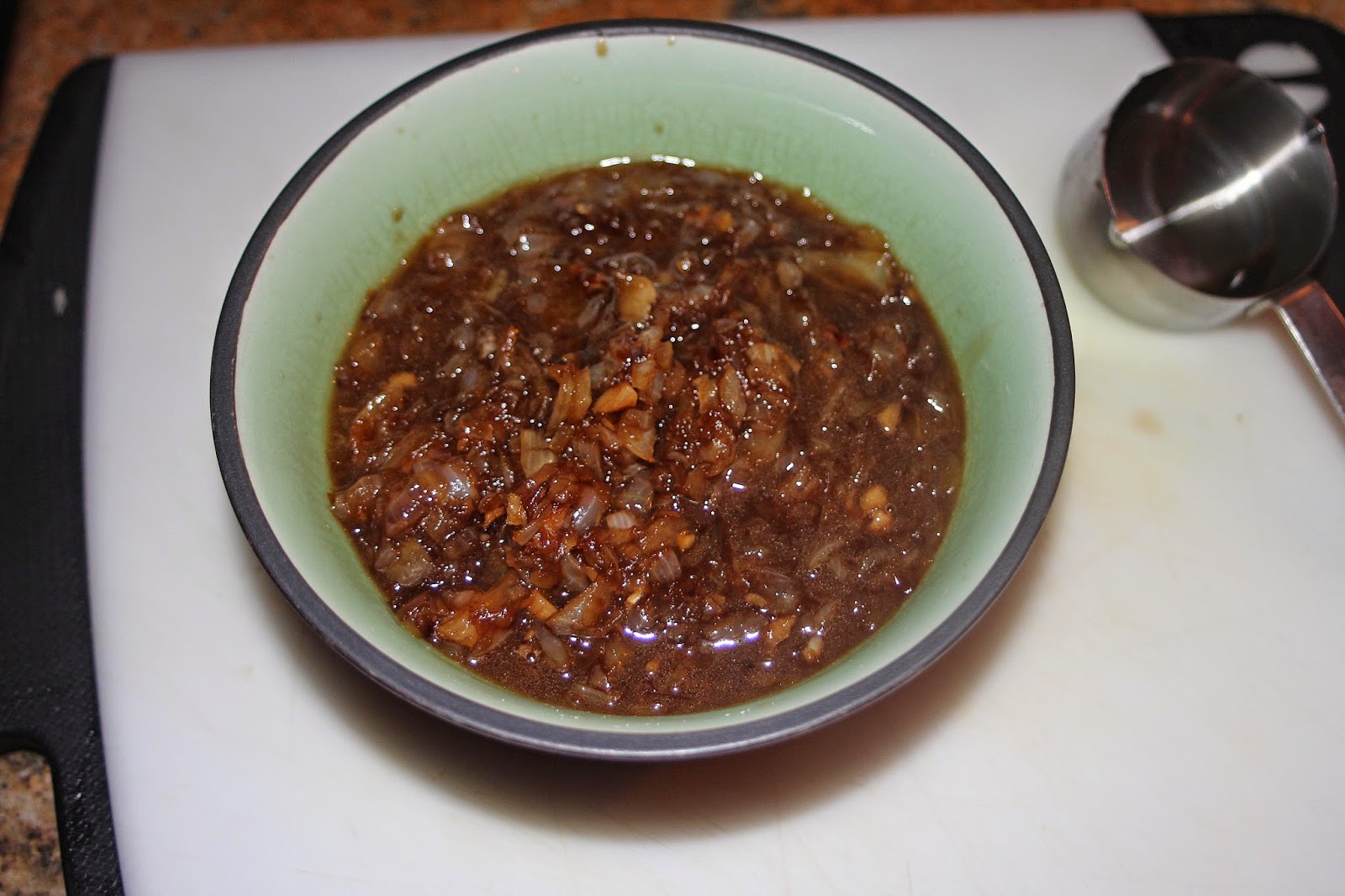 Remove and set mixture aside. 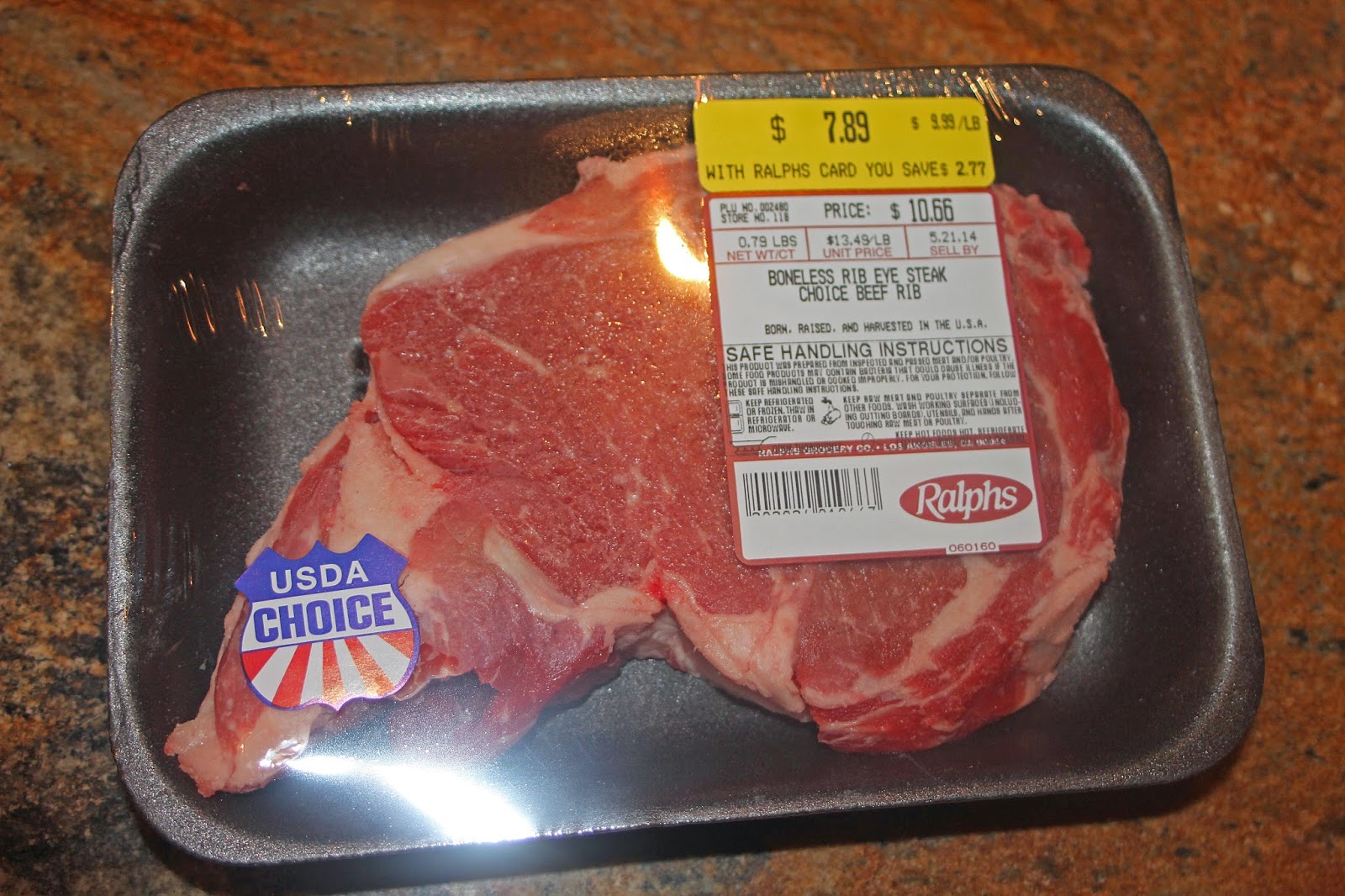 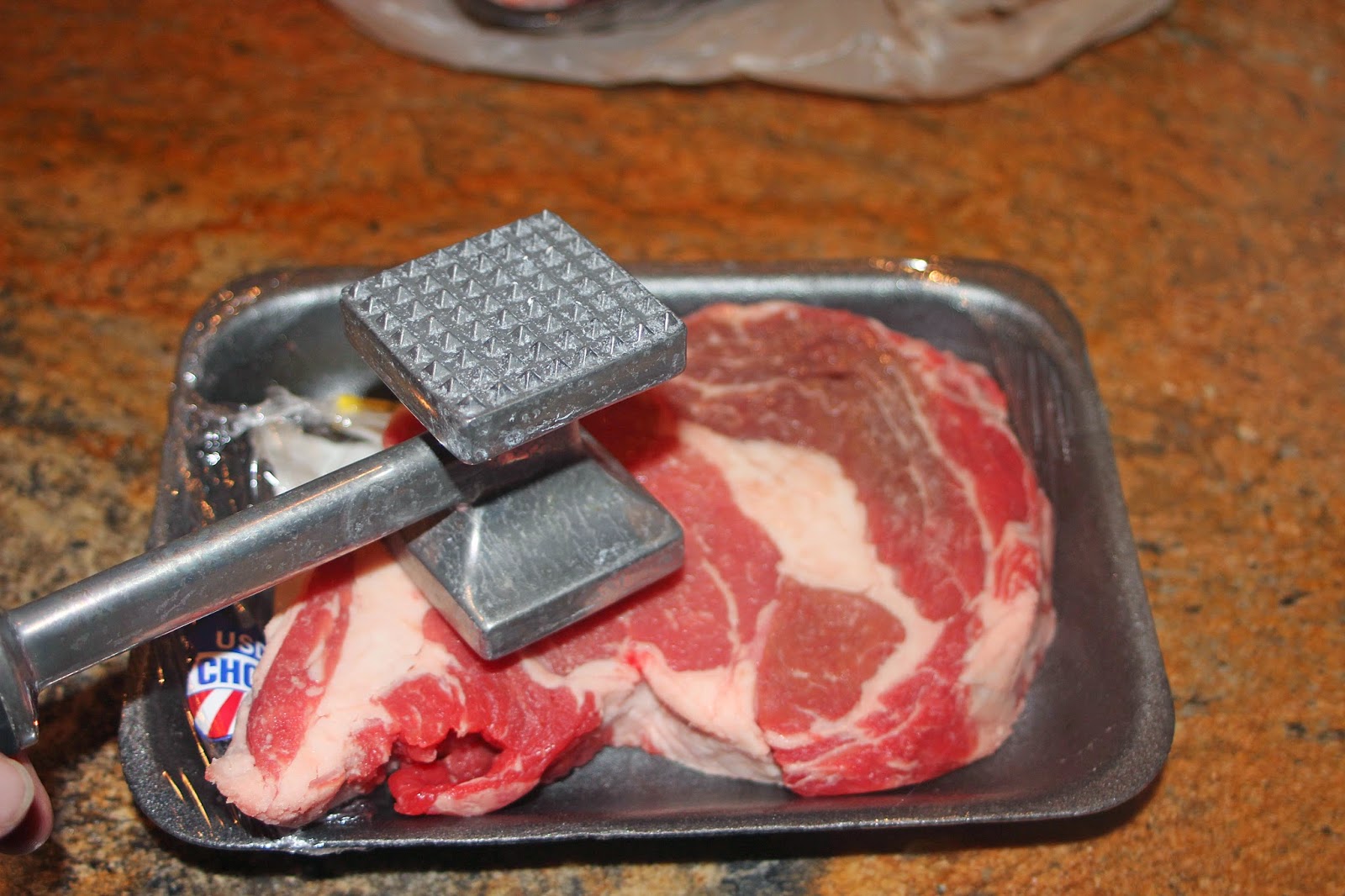 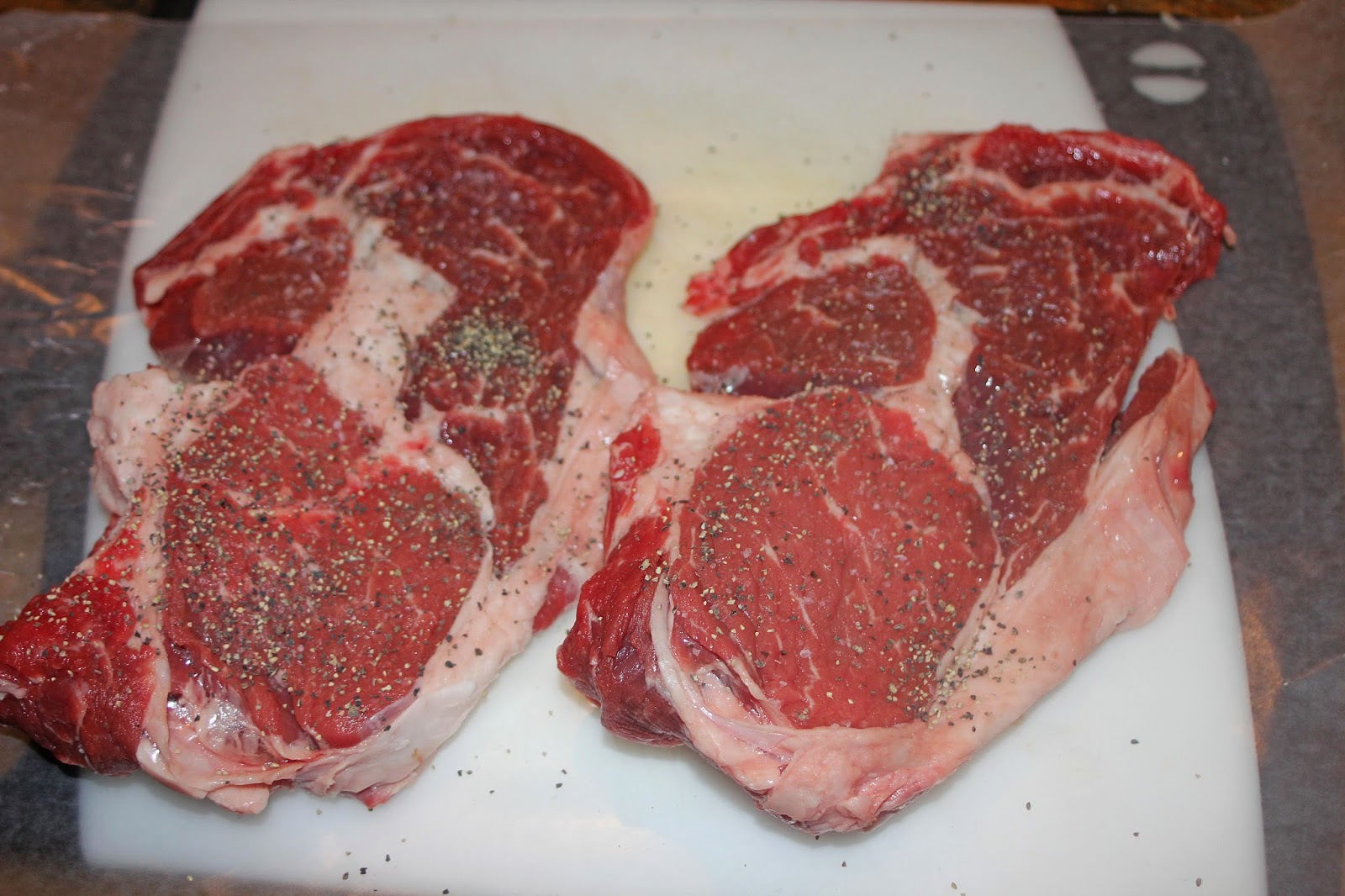 Season steaks on both sides with salt and pepper. 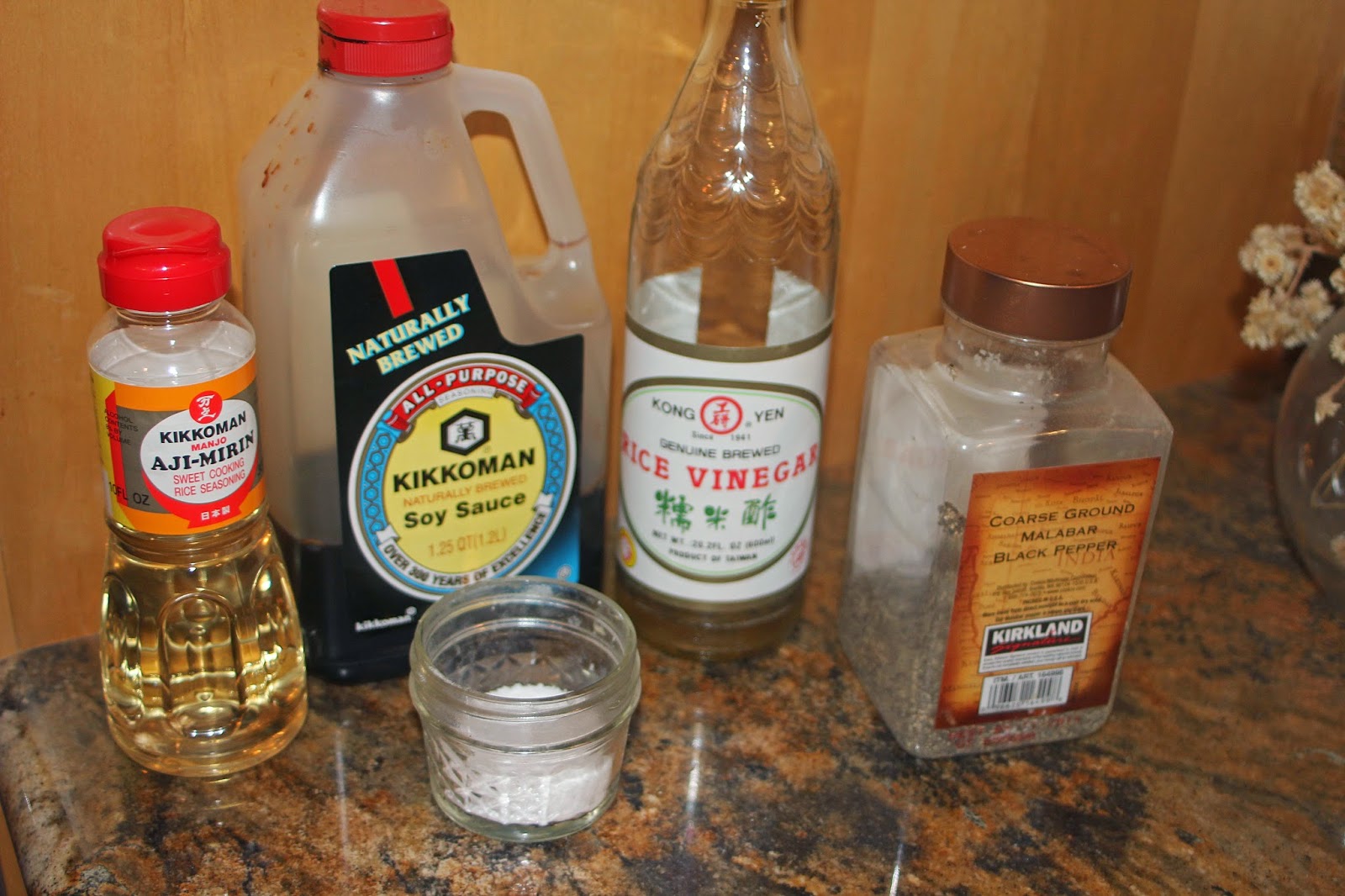 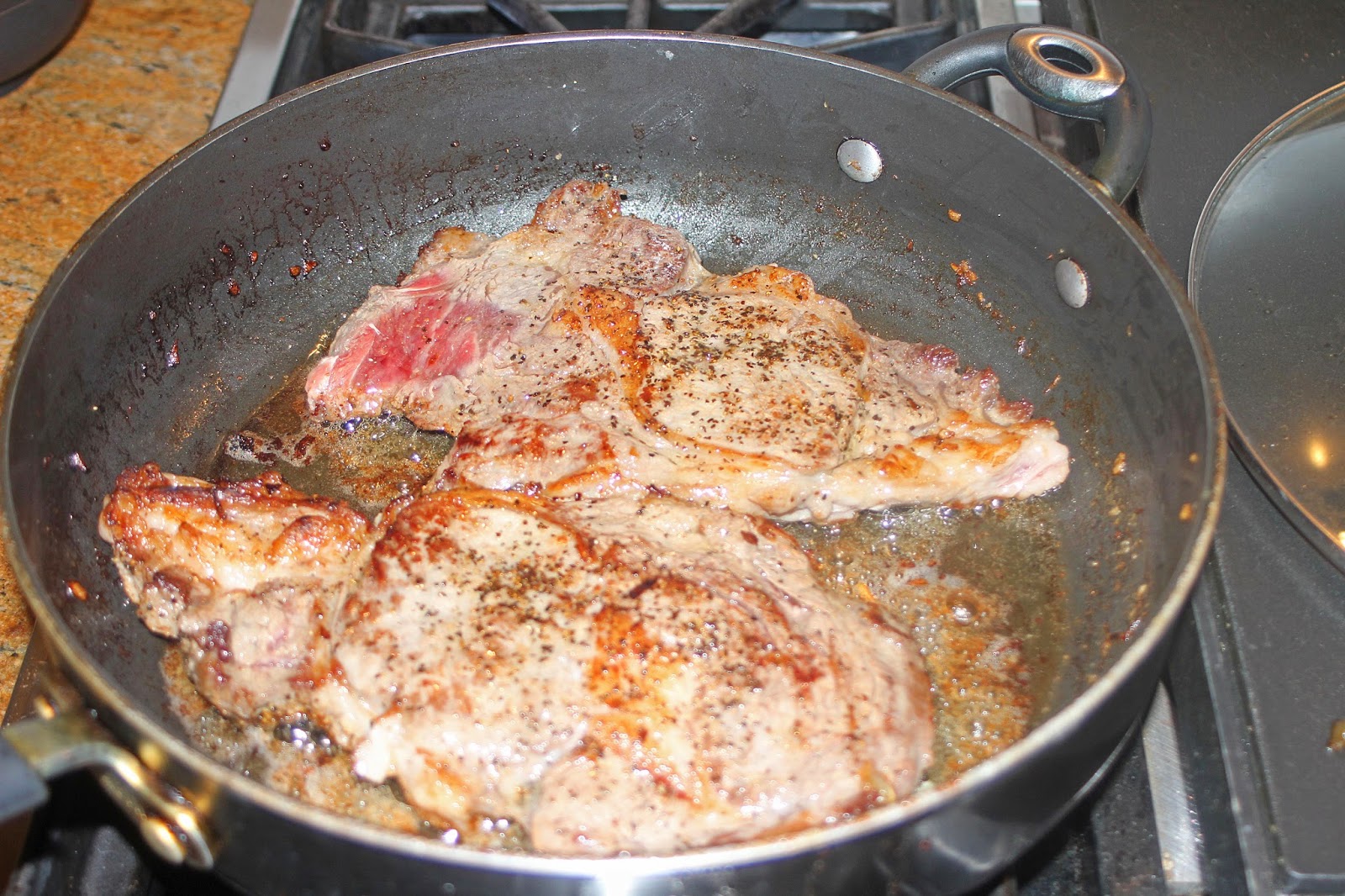 Salt and pepper-seasoned steaks, being seared in butter and olive oil. 3 minutes per side should result in medium/medium-rare. 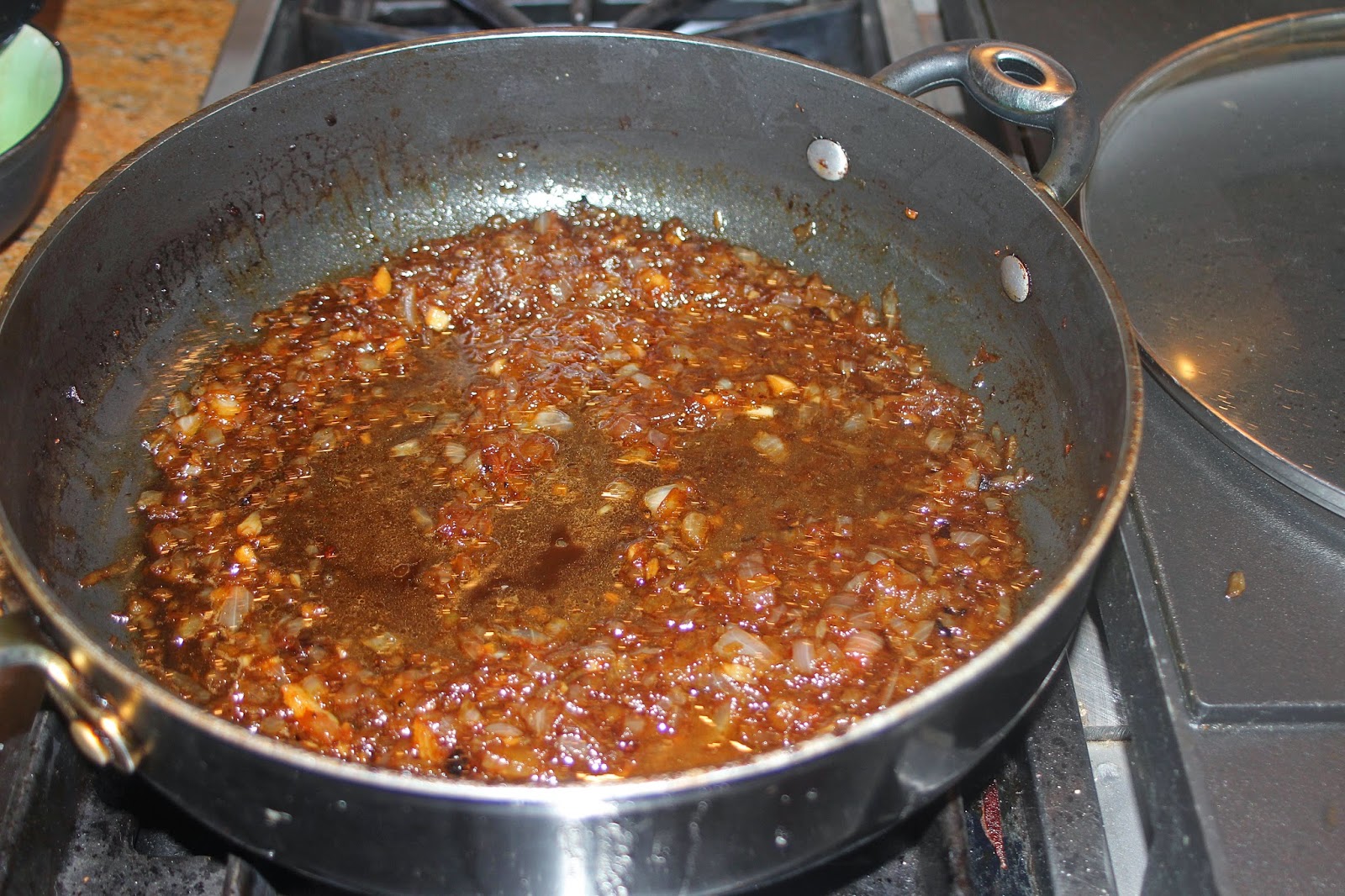 In the same pan that the steaks were fried in, add back the reserved onion mixture. Stir briefly and remove from heat. 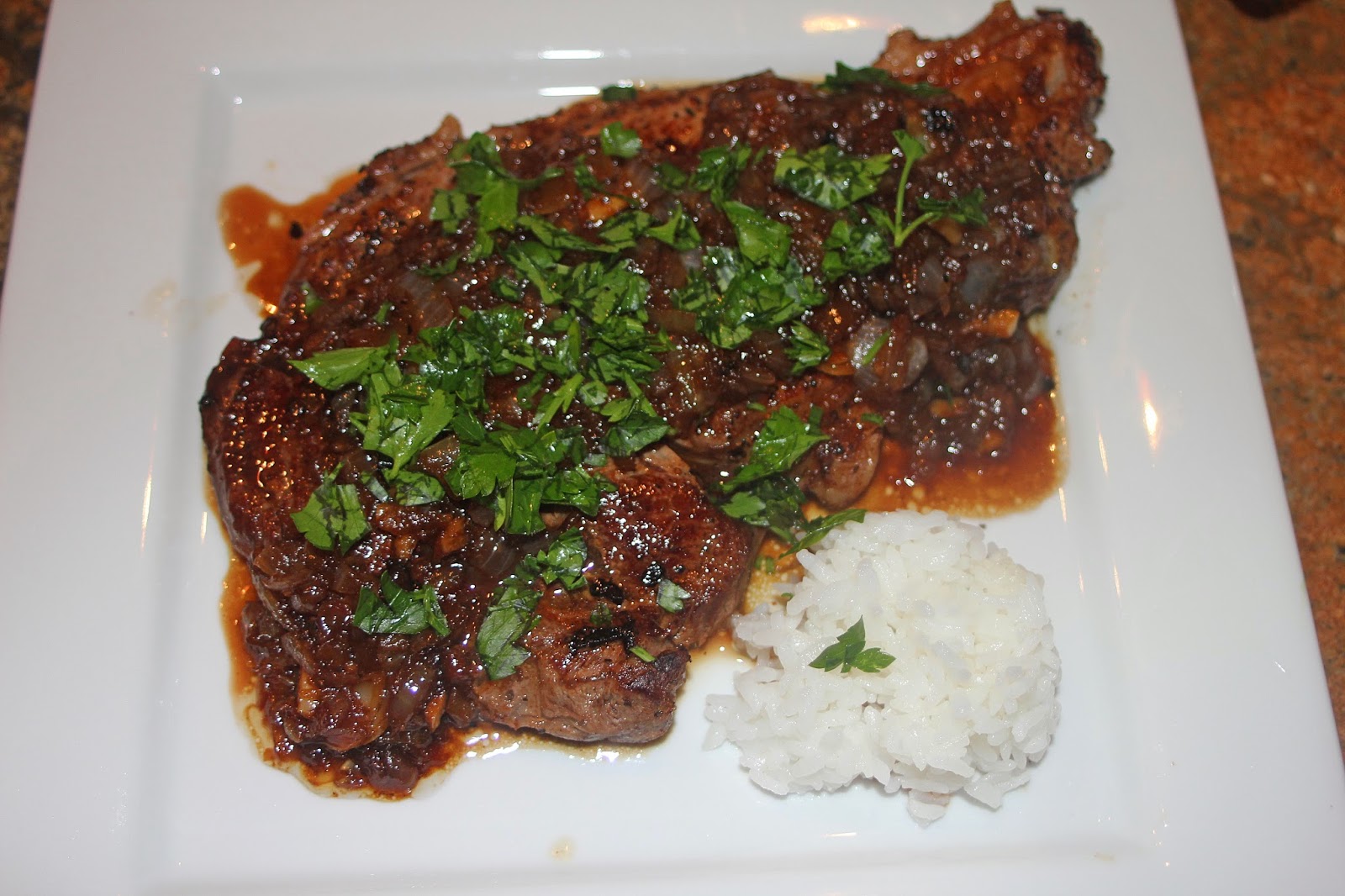 To Plate: Place the steak on a plate and top with a generous helping of the onion sauce. Garnish with fresh chopped parsley and a scoop of steamed white rice.
Posted by camissonia at 12:20 AM