So, what is a Kohlrabi? It's a seriously underused and relatively unknown member of the cabbage family.


Here's a description from Wiki:
http://en.wikipedia.org/wiki/Kohlrabi


"Kohlrabi (German turnip) (Brassica oleracea Gongylodes group) is a low, stout cultivar of the cabbage that will grow almost anywhere. The name comes from the German Kohl ("cabbage") plus Rübe ~ Rabi (Swiss German variant) ("turnip"), because the swollen stem resembles the latter. The same roots are also found in the German word Kohlrübe, which refers to the rutabaga. Kohlrabi has been created by artificial selection for lateral meristem growth (a swollen, nearly spherical shape); its origin in nature is the same as that of cabbage, broccoli, cauliflower, kale, collard greens, and Brussels sprouts: They are all bred from, and are the same species as, the wild cabbage plant (Brassica oleracea).The taste and texture of kohlrabi are similar to those of a broccoli stem or cabbage heart, but milder and sweeter, with a higher ratio of flesh to skin.


Kohlrabi can be eaten raw as well as cooked.
I've only eaten Kohlrabi twice before in two different preparations. The first time was years ago when my Aunt Sue in Colorado Springs made a Chinese stir-fry dish with julienned kohlrabi (harvested from her garden) with sliced beef marinated in soy sauce, rice wine, and sesame oil. Aunt Sue called this veggie "tsai kok" in Taiwanese, and it was only years later that I figured out it was Kohlrabi. The second time was a dish my grandmother made with raw kohlrabi cut into matchstick-sized pieces marinated in soy, vinegar, sugar, sesame oil & a touch of chili.
Fast forward a couple decades later and I've finally harvested the first ever kohlrabi from my own garden. I had planted some earlier in the spring and only one of them grew to a harvestable size. Being cool-season crops, I was worried that our recent bout of very warm weather had rendered them inedible. Anyhoo, with the one kohlrabi I was able to salvage, I decided to try to recreate my grandmother's marinated version, and came up with this recipe. It turned out good...in fact, really, really good. The flavor of kohlrabi is hard to describe, but it's kinda like a cross between a broccoli stem and daikon radish. A tad crisp, sweet, mild, and with just a little hint of that Brassica bitterness. I plan to grow a lot more of these come fall.
Ingredients:
1 large kohlrabi, peeled & cut into matchsticks
2 tbsp. sesame oil
2 tbsp. rice vinegar
1 tbsp. soy sauce
2 tsp. sugar
1/4 tsp. ground ginger
1/4 tsp. granulated garlic
1 tsp. Chinese chili sauce or Sambal
1. Remove the leaves from the kohlrabi; wash & peel the thick outer rind/skin with a paring knife. Slice the kohlrabi into 1/8" slices, line up & then cut into matchstick thin pieces. Place in medium bowl.
2. Add remaining ingredients to the kohlrabi & toss well. Place Kohlrabi into a Ziploc bag and refrigerate at least 2 hours (preferably overnight, turning the bag around several times) before serving. 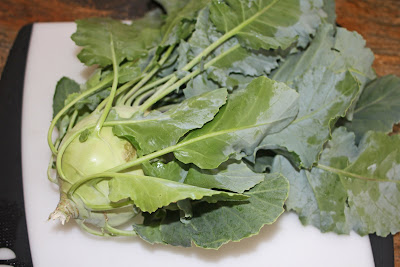 Kohlrabi, fresh from the garden. 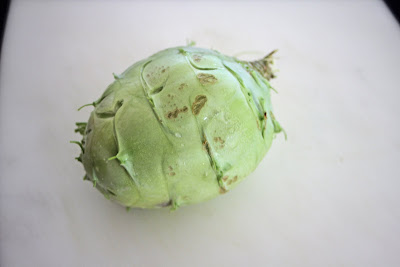 Remove the leaves from the kohlrabi stem. 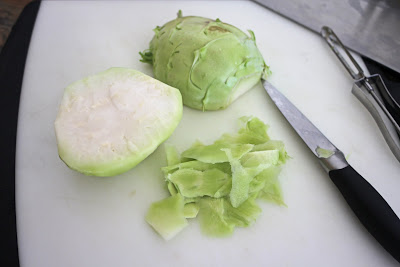 Cut Kohlrabi in half & cut off the thick outer skin with a paring knife. 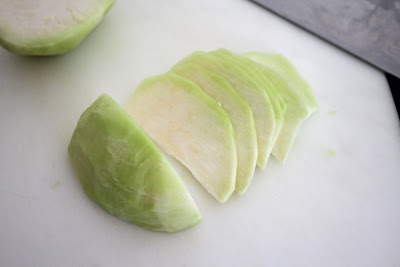 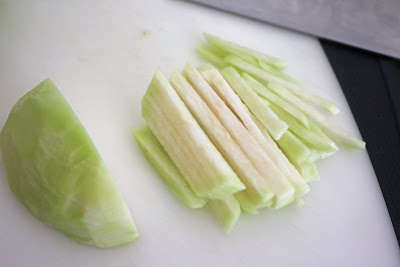 Stack up the slices and cut into thin matchstick-sized pieces (like a thicker julienne). 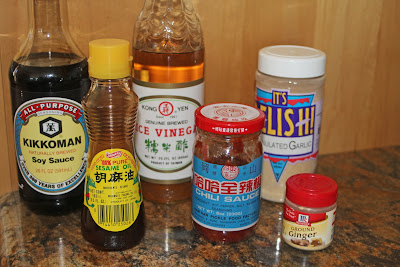 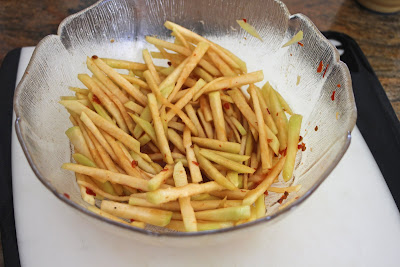 Toss all ingredients together with the sliced kohlrabi. 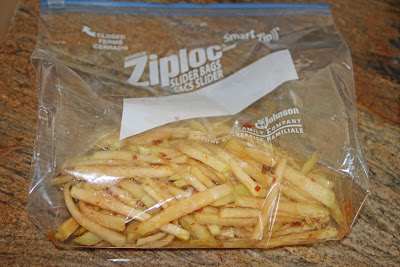 Place into a large Ziploc bag and refrigerate at least 2 hours or overnight. Turn bag over several times during this time, to distribute marinade evenly. 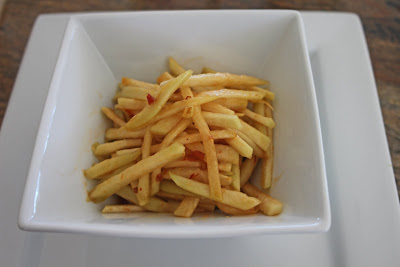 Serve in a bowl, 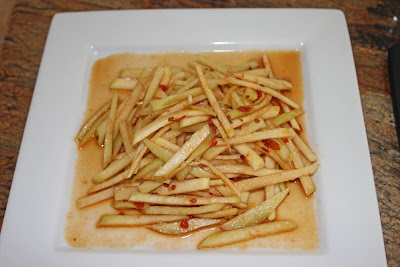 Or serve on a plate. Whatever floats your boat. Great as an appetizer or snack.
Posted by camissonia at 2:37 PM