A seafood boil, whether from Louisiana, coastal Georgia, South Carolina, New England or the Chesapeake Bay is typically a very large pot of simple goodness filled with shellfish galore (e.g., crab, shrimp, crawfish, clams), onion, garlic, sometimes potato and/or corn, and simple but robust seasonings (Old Bay is a traditional fav). A seafood boil usually portends party time and festive communal gatherings, because there's so much of it to go around and also because it just tastes so damn good. 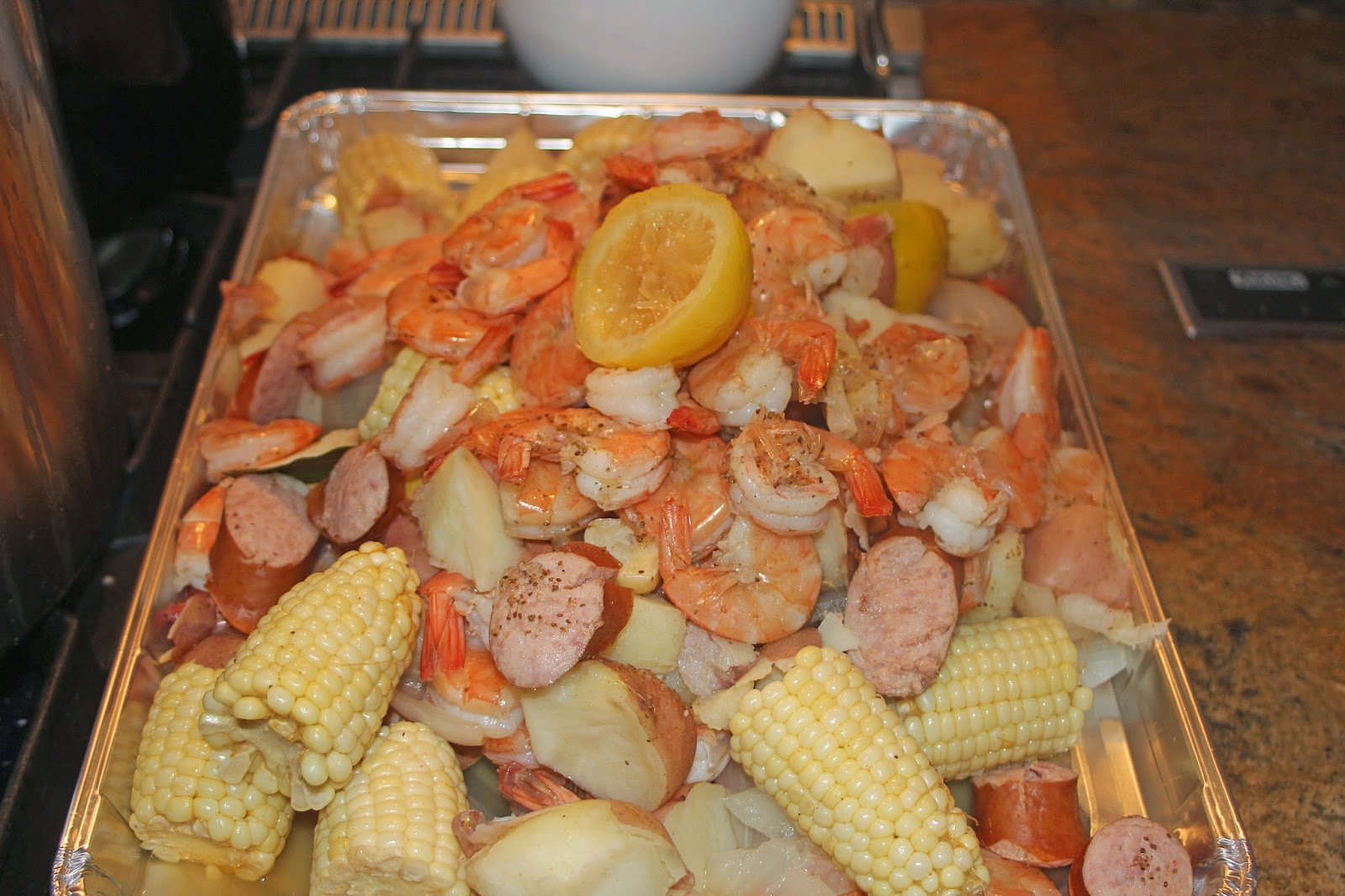 A blurb from Wiki:
Seafood boil is the generic term for any number of types of social events in which shellfish is the central element. Regional variations dictate the kinds of seafood, the accompaniments and side dishes, and the preparation techniques (boiling, steaming, baking, or raw). In some cases, a boil may be sponsored by a community organization as a fund-raiser or a mixer. In this way, they are like a fish fry, barbecue, or church potluck supper. But boils are also held by individuals for their friends and family for weekend get-togethers and on the summer holidays of Memorial Day and the Fourth of July. There are also companies that can cater a boil for large and small events. While boils and bakes are traditionally associated with coastal regions of the United States, there are notable exceptions. For example, the Fiesta Oyster Bake[1] (San Antonio) began in 1916 as an alumni fund raiser for St. Mary's University.[2] It is now attended by over 70,000 people during its two day run and is a major music and cultural event in the city.

I adapted this recipe from Tyler Florence's "Shrimp Boil with Clams and Lemon" http://www.foodnetwork.com/recipes/tyler-florence/shrimp-boil-with-clams-and-lemon-recipe.html
which is similar to the Low Country style of seafood boil that you might find in coastal Georgia or South Carolina. I added a bottle of Newcastle Brown Ale to the boiling liquid and adjusted the other seasonings and ingredients to my taste.

1. Fill a large stock pot with 4 quarts of water. Squeeze the juice of the 2 lemons into the water and add the halves into the stock. Add bay leaves, 2 tbsp. Kosher salt, Old Bay seasoning, onion, garlic and beer. Bring to a boil over high heat and then simmer for 10-15 minutes or until the broth is aromatic.

2. Add the potatoes and simmer for 20 minutes; add the corn and sausage and cook another 5-6 minutes.

3. Add the clams and cook for 10 minutes or until they open.

4. Add the shrimp, stir briefly, then turn off the heat.

5. Using a strainer, remove all the shellfish and veggies onto a large tray or platter (or you can go traditional and spread everything out on a newspaper-lined table). My take is to give each person a bowl of the broth on the side for dipping. 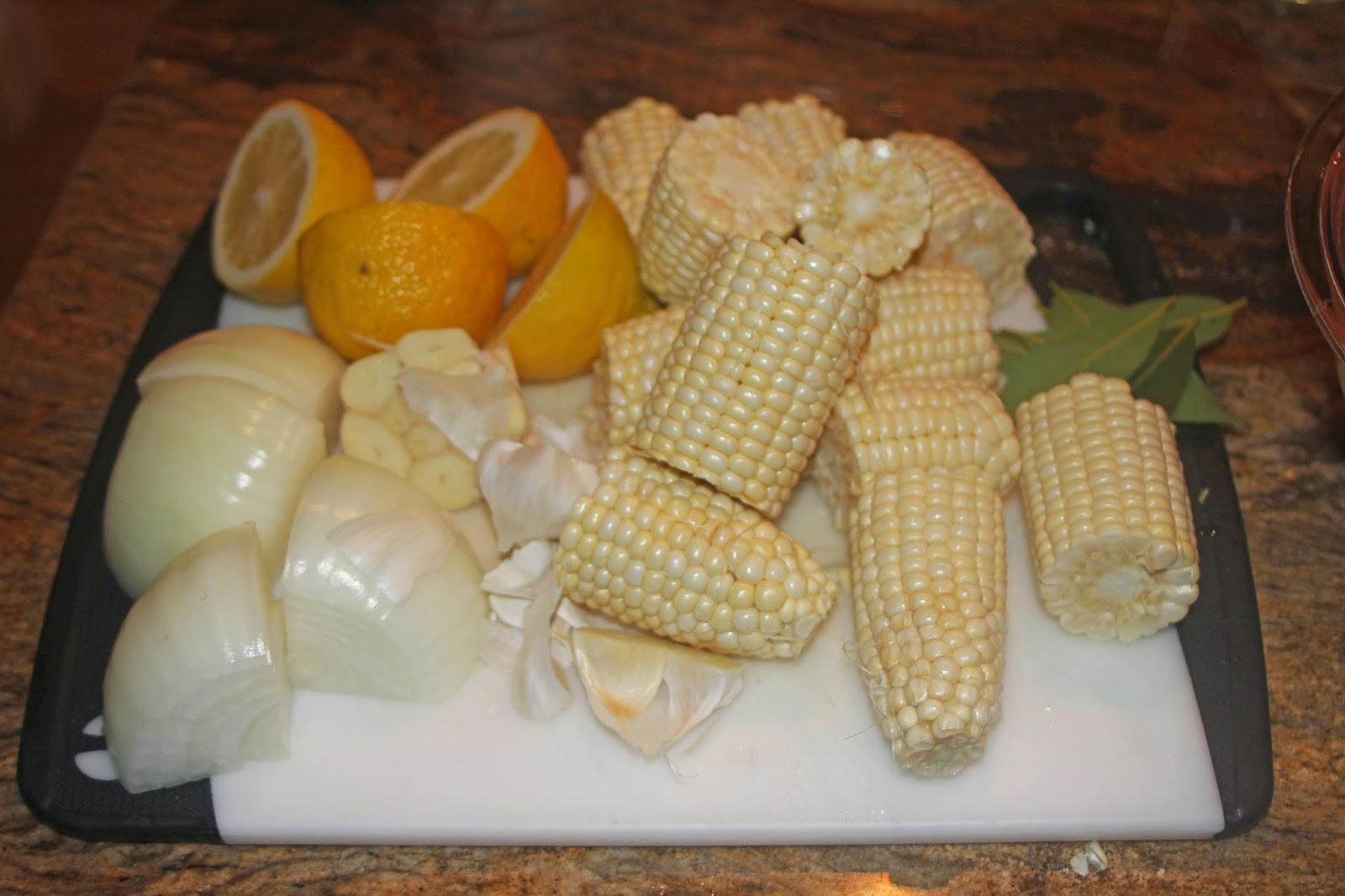 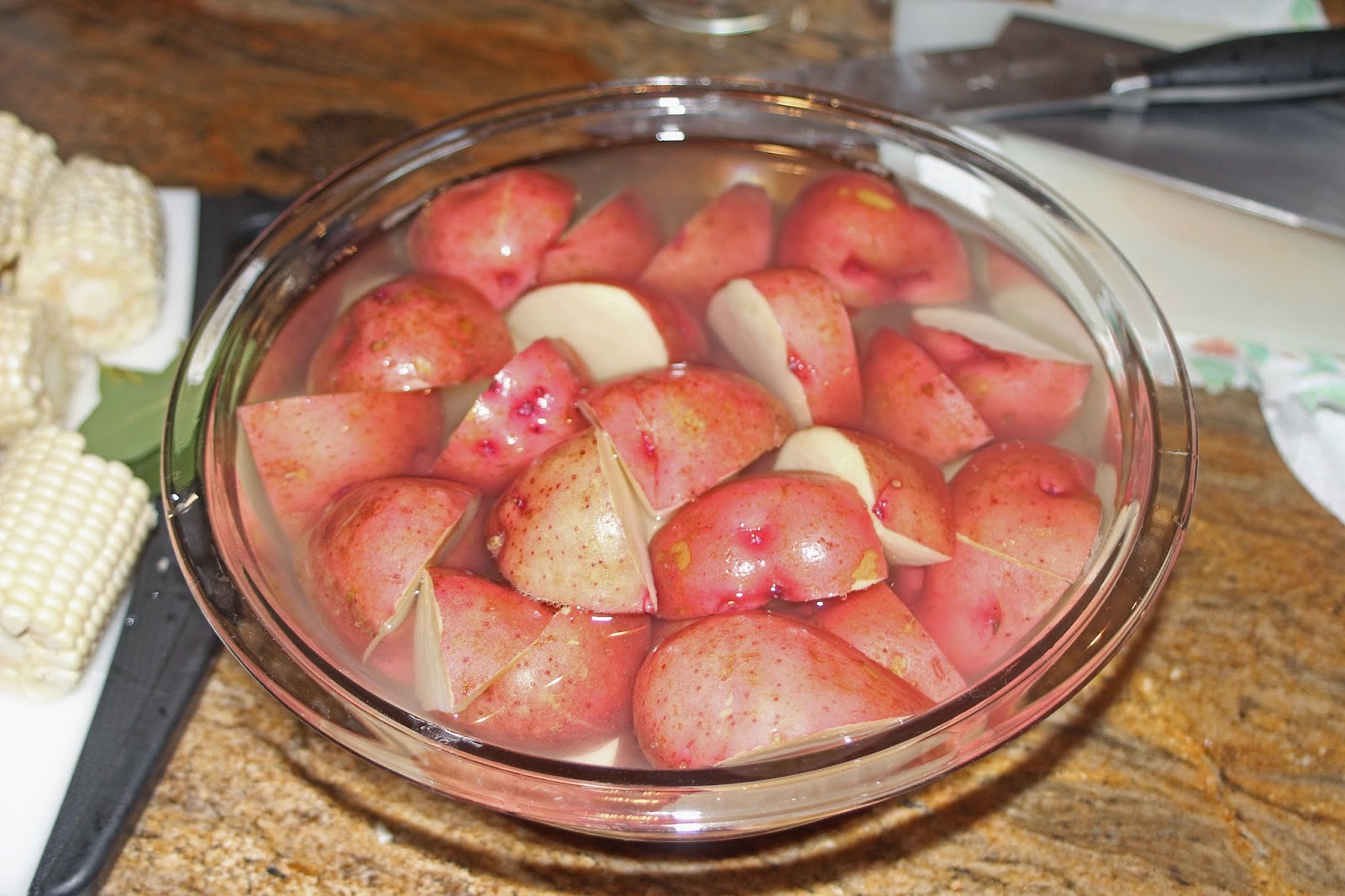 3 lbs. of medium red potatoes, quartered (I keep them soaked in water until ready to use so they don't oxidize and turn brown). 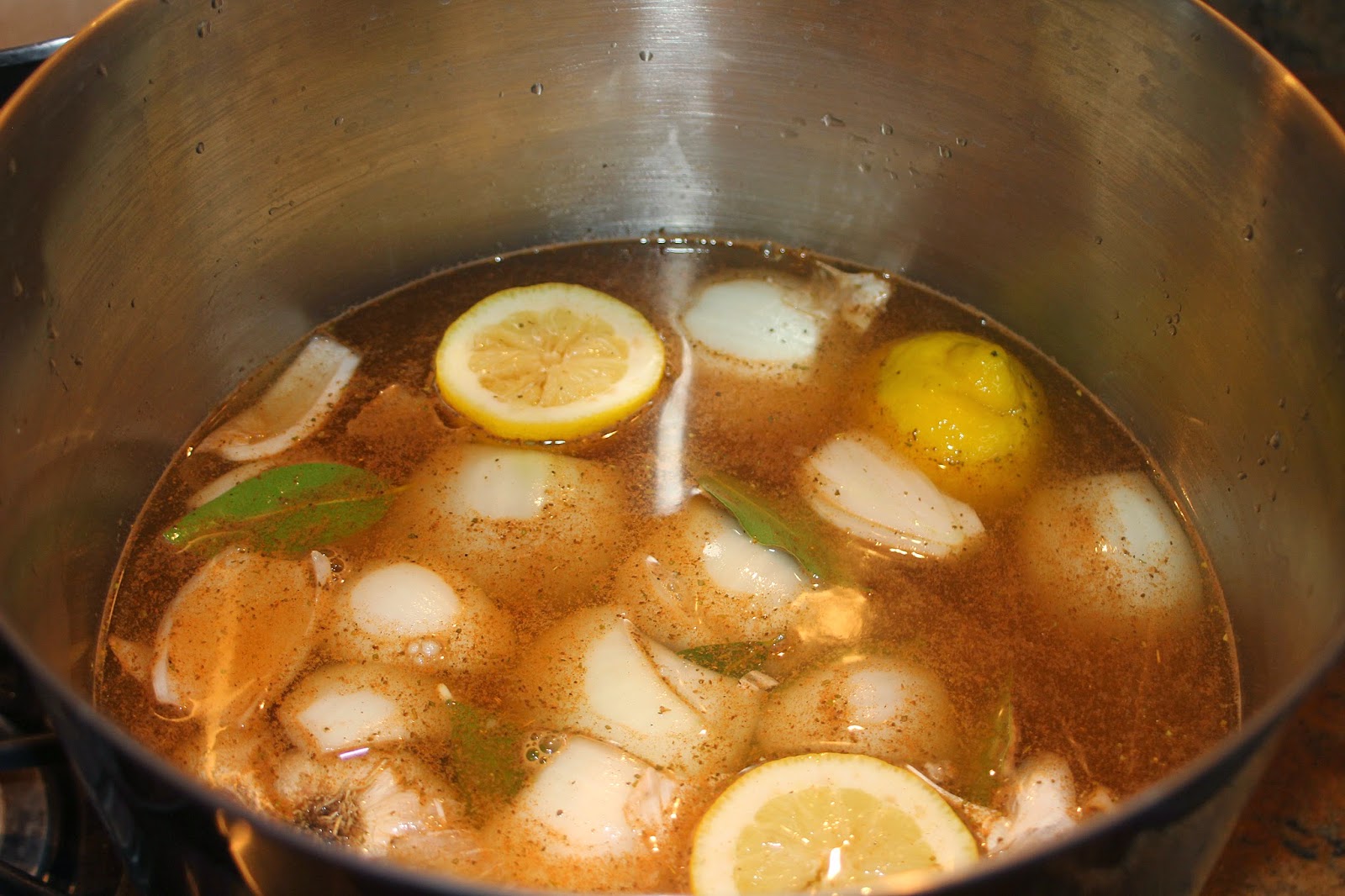 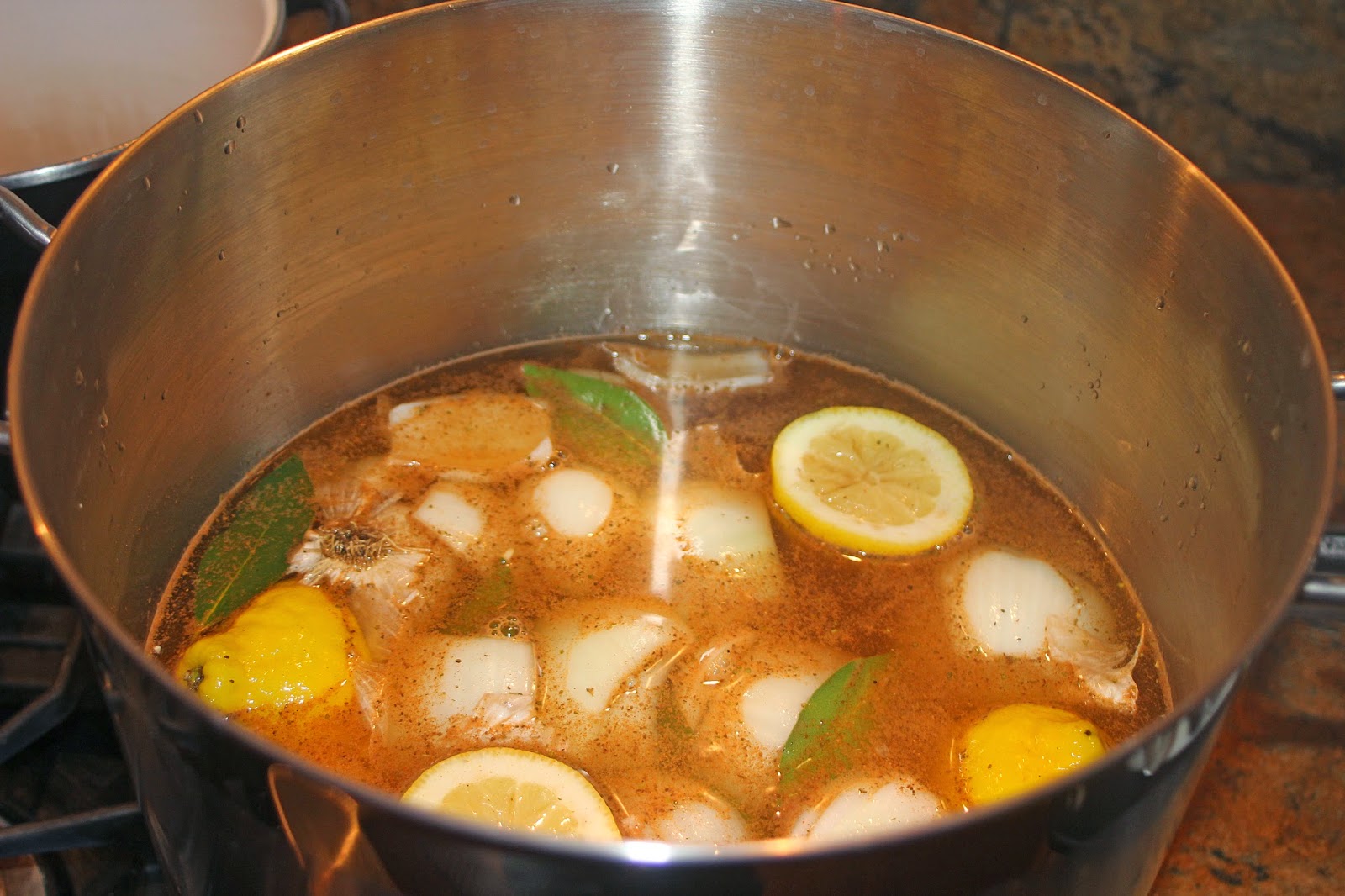 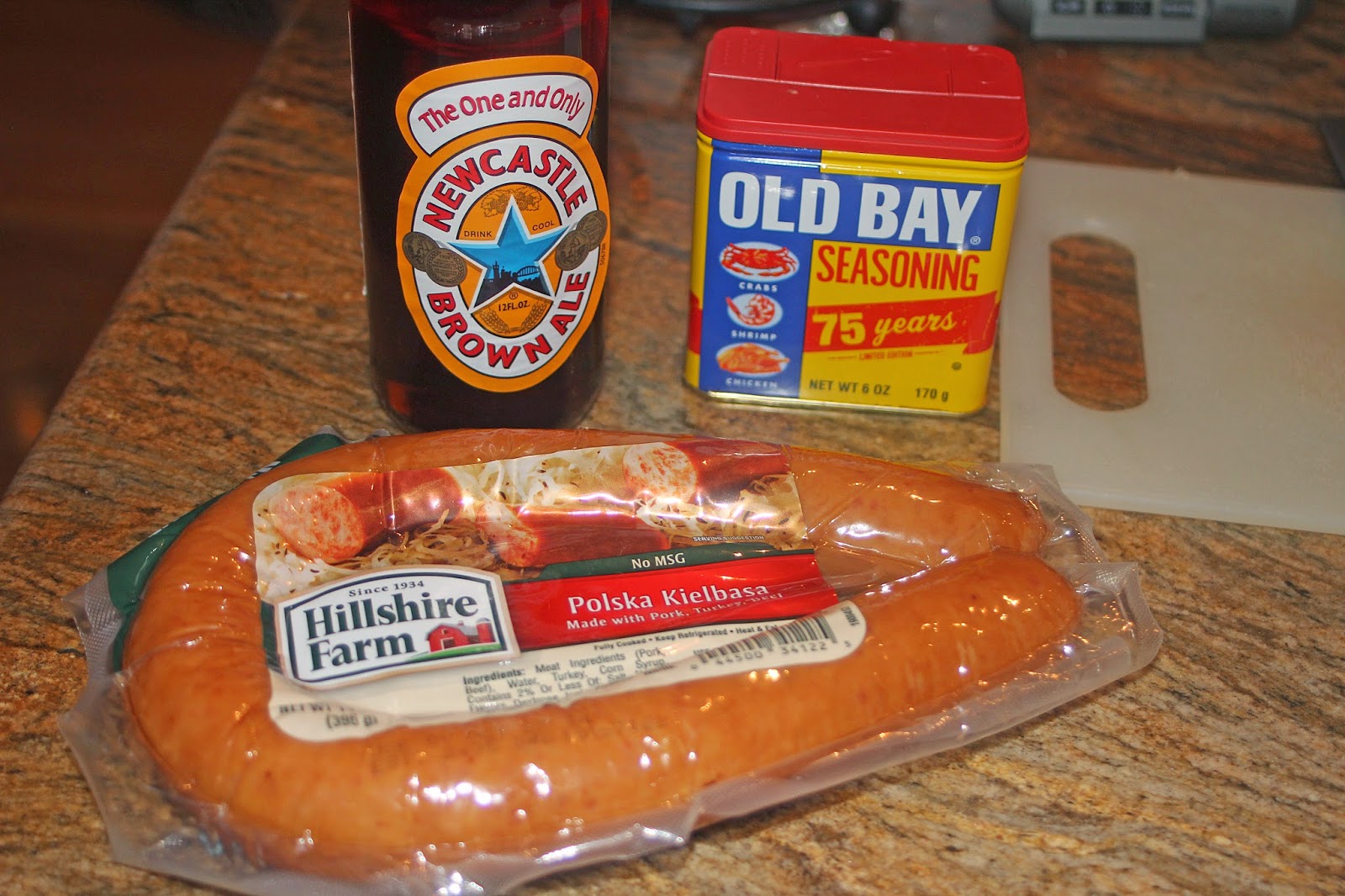 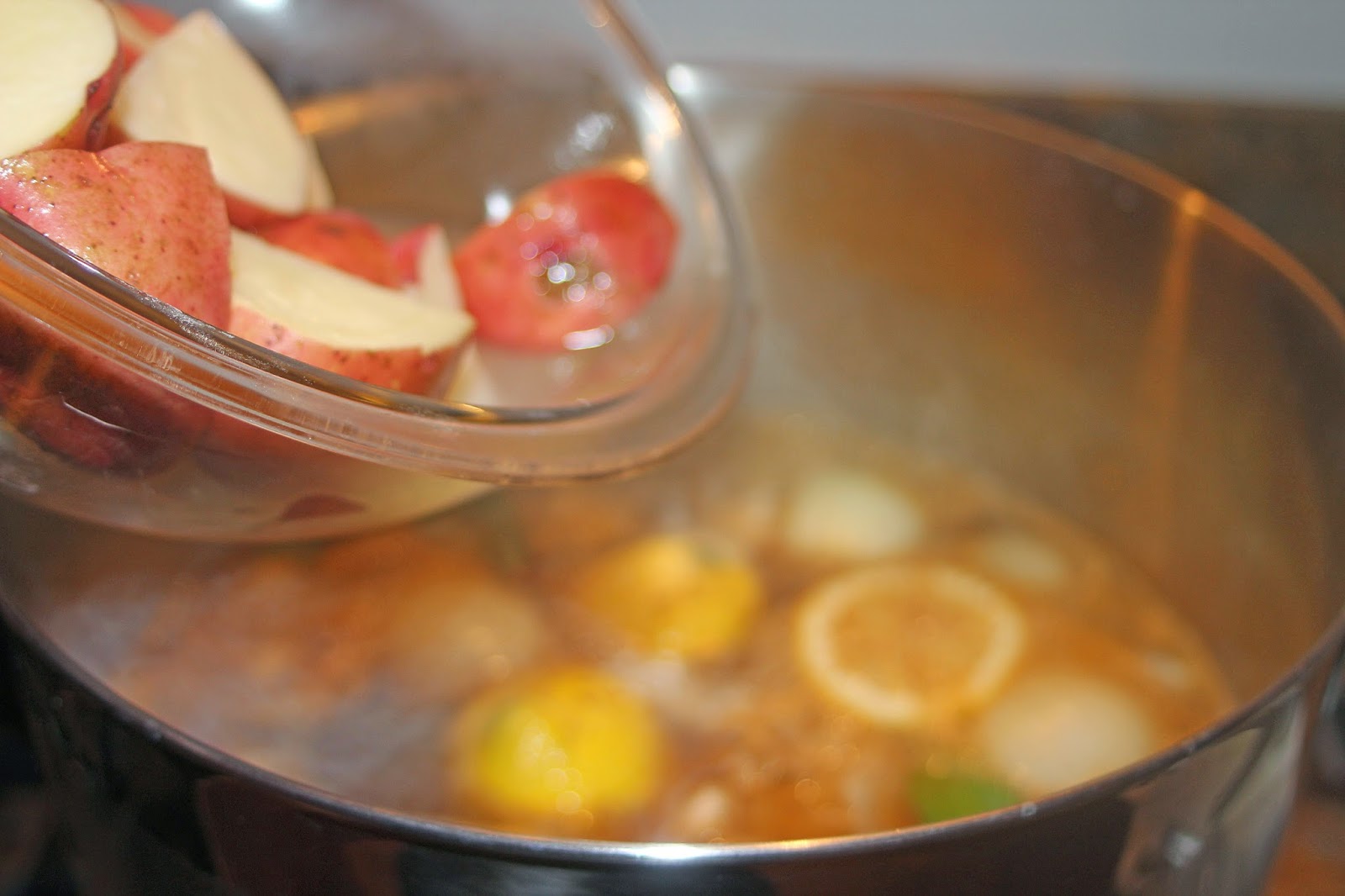 After the broth has simmered for about 10-15 minutes, add the potatoes and cook for 20 minutes. 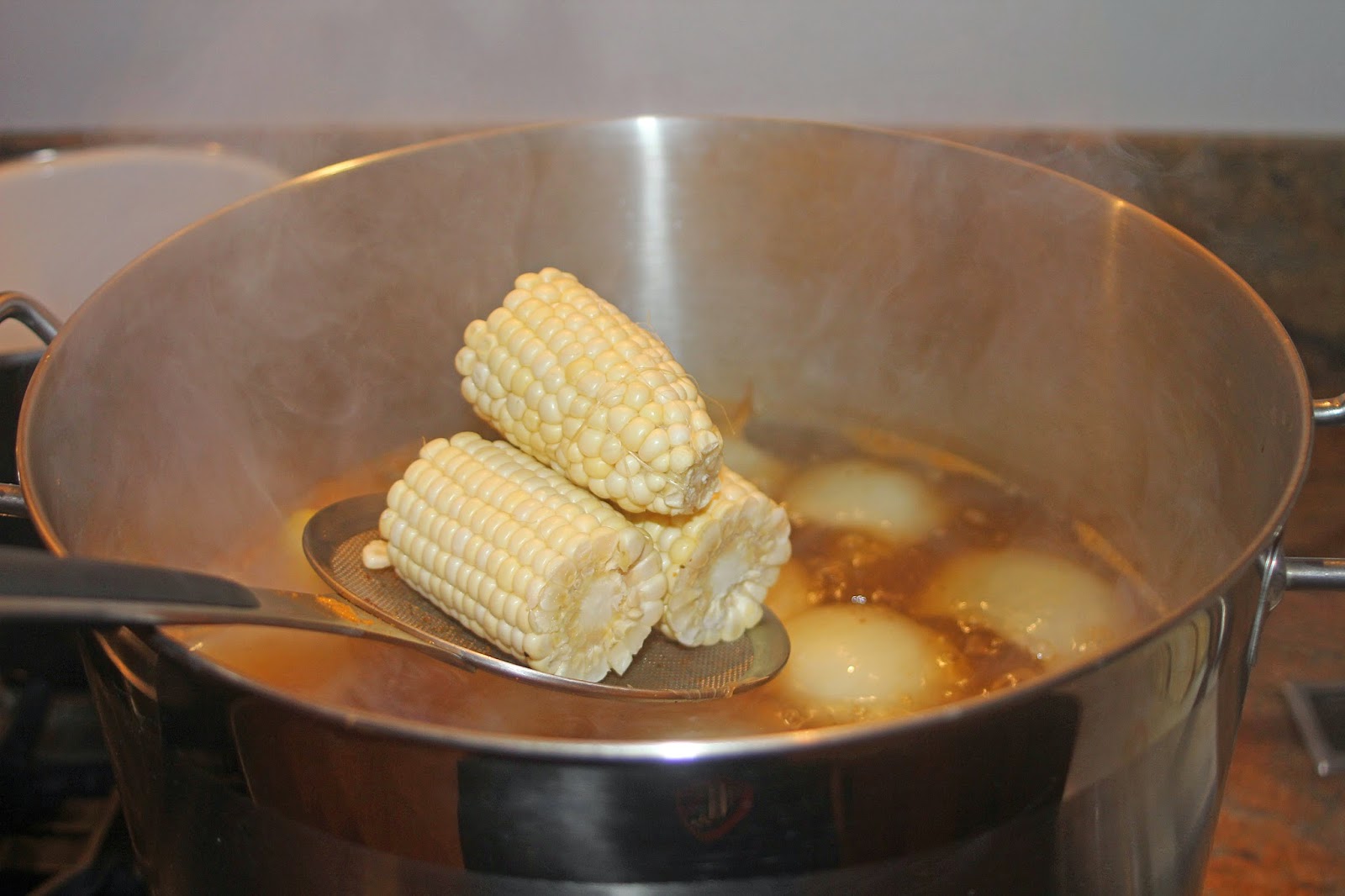 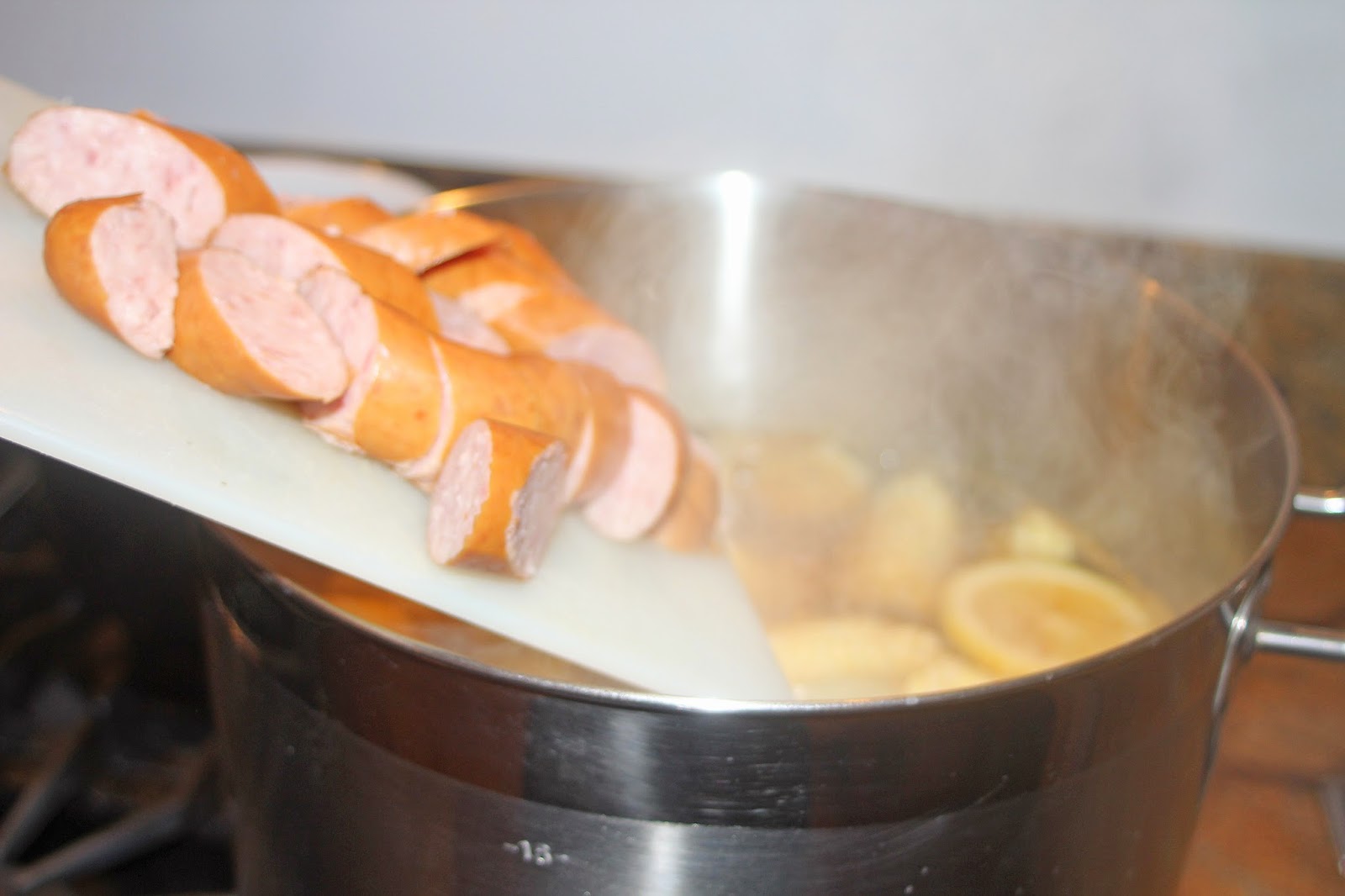 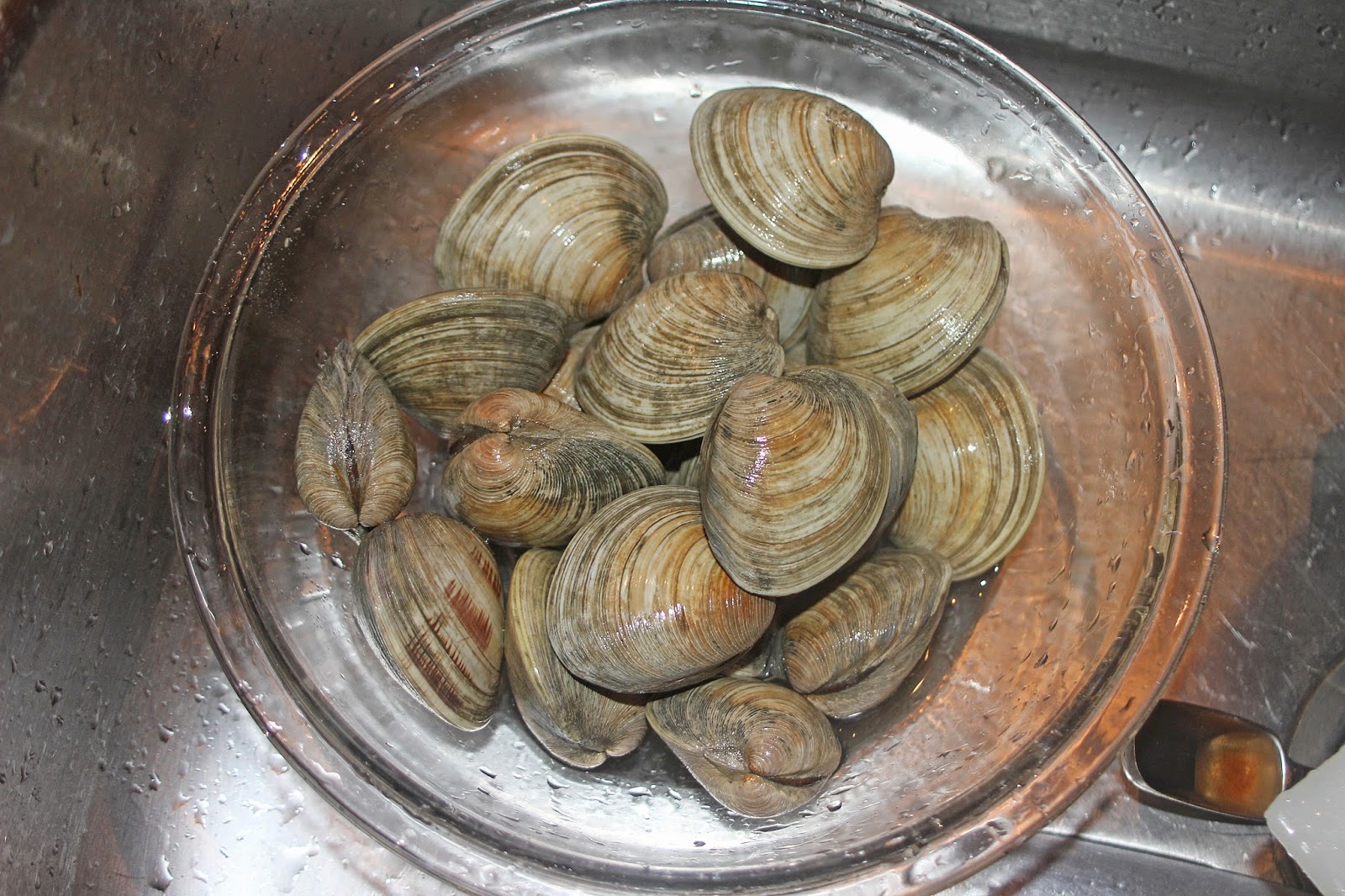 Scrub and rinse the clams before using. 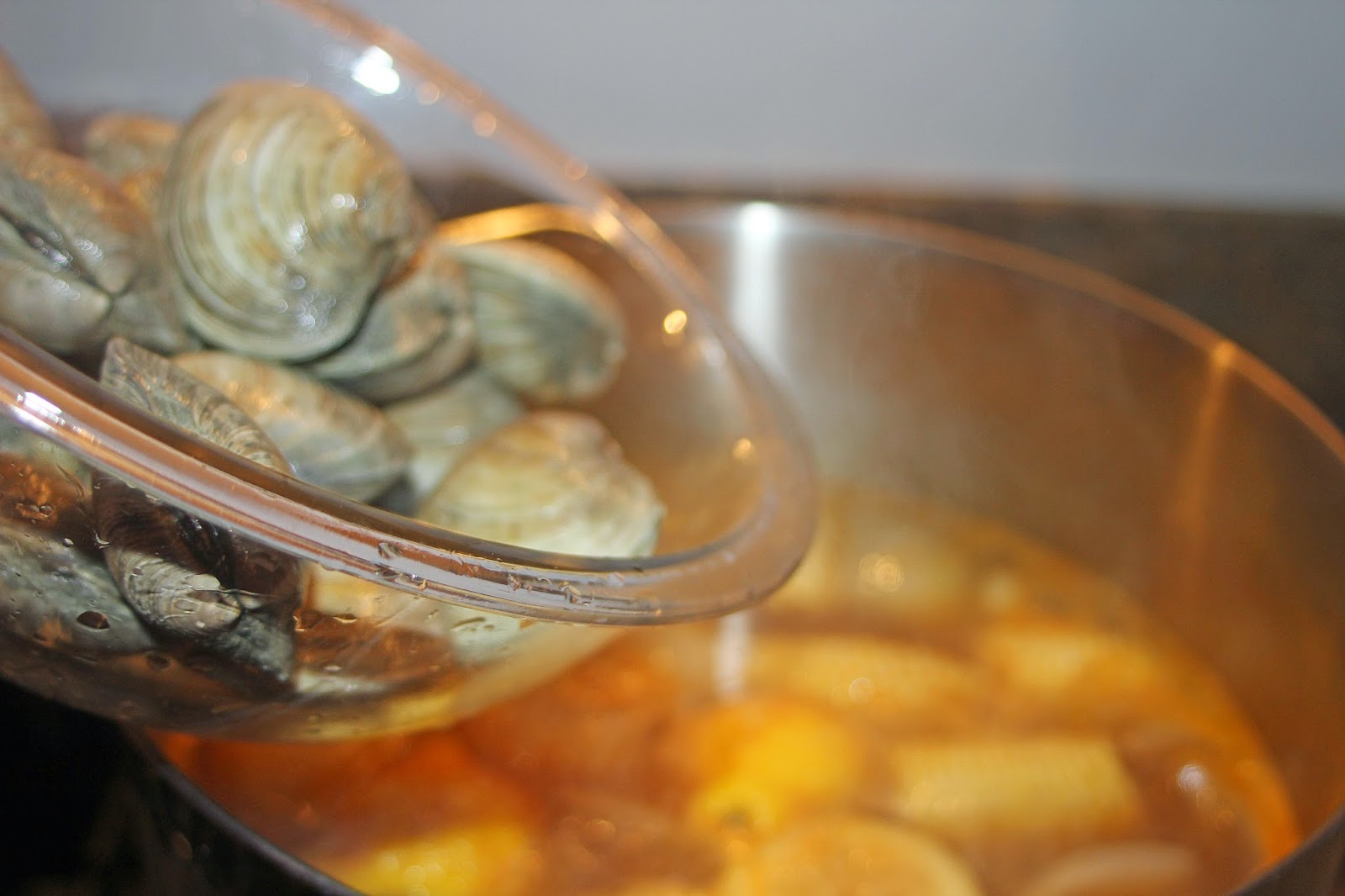 Add the clams to the broth and cook for 10 minutes or until they open. Discard any clams that do not open. 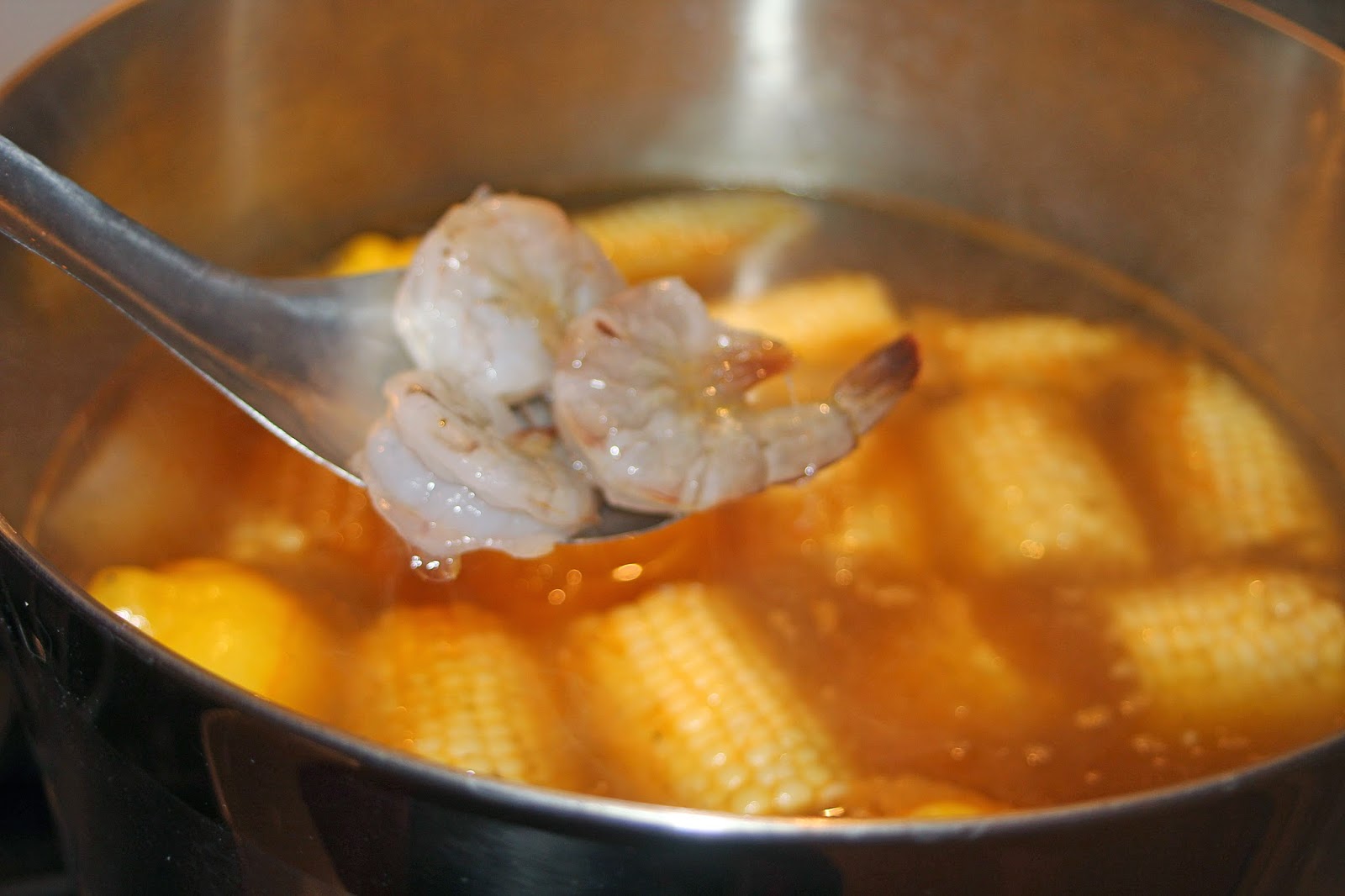 Add the shrimp, stir briefly, then turn off the heat. 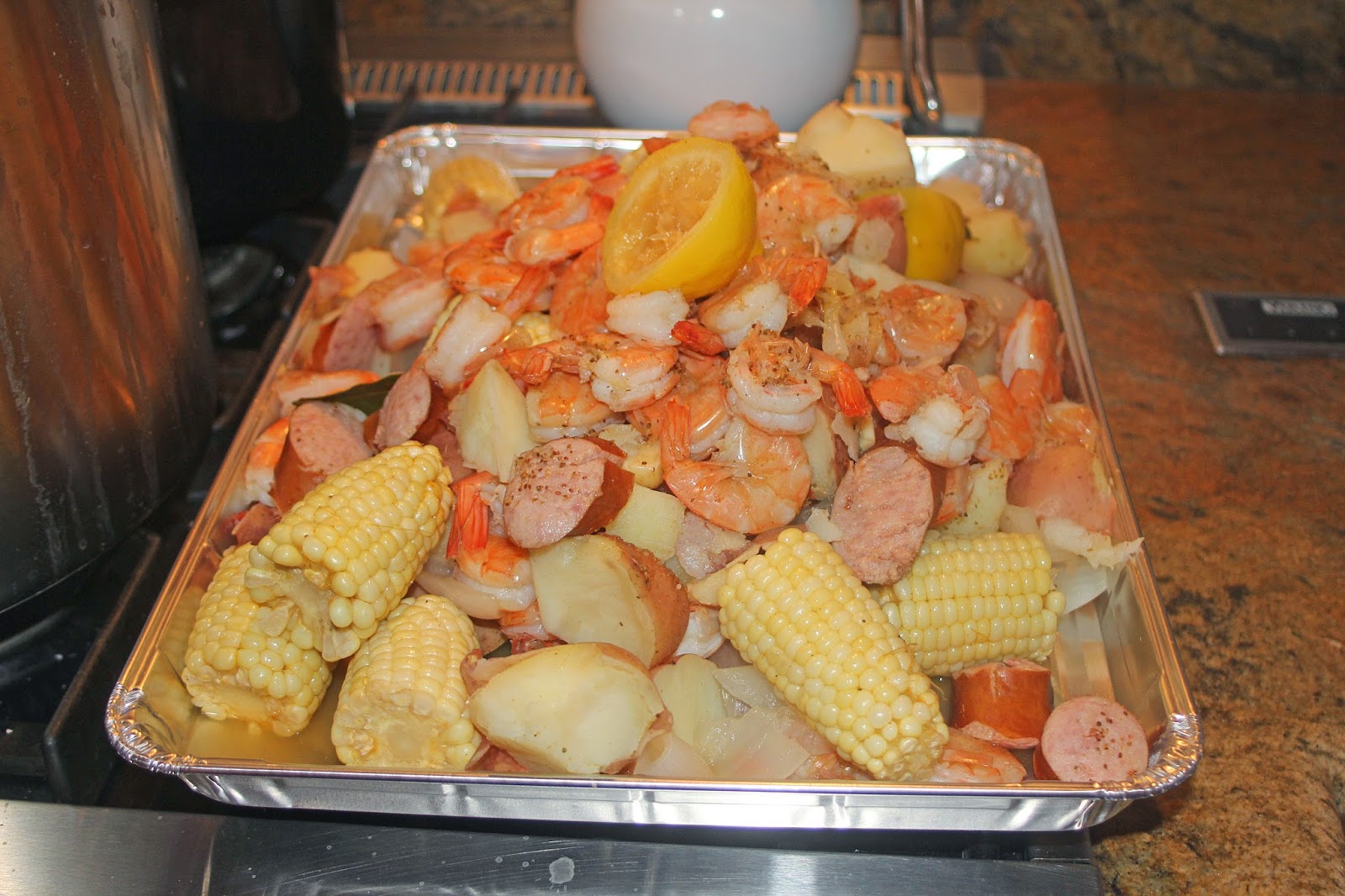 Use a strainer and remove all of the shellfish and veggies to a platter (reserve the broth). This is a communal meal so each person will just grab what they want to eat out of the platter. I like to give each person a bowl of the broth on the side for dipping.