We harvested a lot of assorted heirloom tomatoes and Marconi Italian peppers last week (last crop of the season), and I had to think of way to use them up. Hungarian Goulash seemed like a good candidate. Hungarian goulash is basically an Eastern European beef stew whose base ingredients include beef, lots of onions, and a generous amount of Hungarian paprika. It's typically served over egg noodles, spaetzle or egg dumplings (I found an egg white cholesterol free dried noodle at the market and decided to use those). The Asian in me thinks this would also be really really good over steamed rice. I adapted this recipe from several I found online, including www.saveur.com, www.easteuropeanfood.about.com, and www.foodnetwork.com. The recipe for the cucumbers was adapted from Food Network: http://www.foodnetwork.com/recipes/hungarian-goulash-recipe2/index.html. Really hearty and tastes even better the next day. Thanks to Orsi, who commented on this post (she's Hungarian), I stand corrected that tomatoes (and perhaps even the potatoes and carrots) are not the norm in a traditional goulash. So I've since renamed the recipe "Hungarian-Style Goulash." It's still delish, but one of these days, I must try a more authentic version! 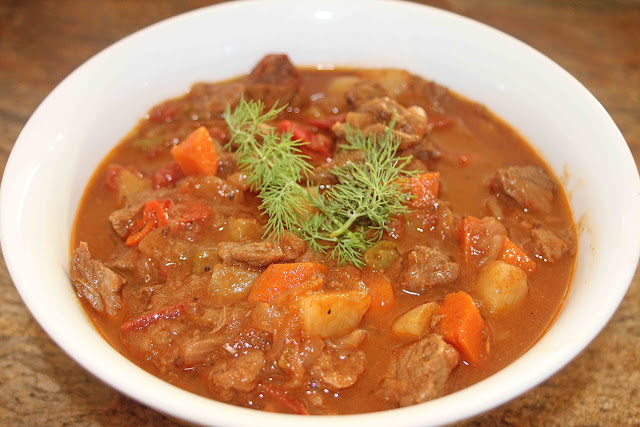 1. Heat 4 tbsp. of oil in a large pan over medium heat. Add the onions and sauté for 8-10 minutes, covered, until soft and translucent. Do not brown. For extra flavor, you can also brown 1 slice of thick-cut bacon, chopped, in the oil before adding the onion.

2. Bring the heat up to high, then add the beef, salt & pepper. Saute for several minutes until lightly browned.

4. Add carrots, tomatoes, and 6 cups of water. Bring to a boil, then reduce heat to medium. Cover & simmer for 1 hour or until beef is really tender.

5. In the meantime, prepare the cucumber salad. Place the sliced cucumbers in a colander and sprinkle with 2 tsp. of salt. Let sit 30 minutes to extract as much water as possible from the cucumbers, then squeeze or blot dry with paper towels. Combine the cucumbers with the remaining ingredients and let marinate in the frig for at least 1 hour before serving.

6. Add potatoes and peppers to the stew and cook uncovered for another 30 minutes.

7. Cook the noodles according to package instructions & drain in a colander (do not rinse). Toss with a little olive oil to keep the noodles from sticking together.

8. To serve: place some of the noodles in a bowl or serving dish. Top with the goulash and garnish with a dollop of sour cream, a sprig of fresh dill and/or chopped fresh parsley. Serve the cucumber salad on the side. 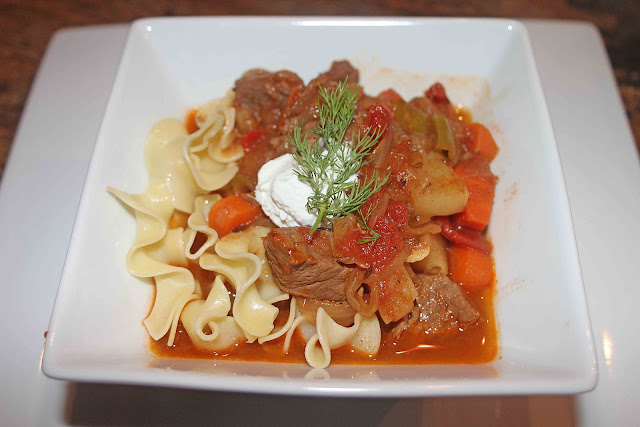 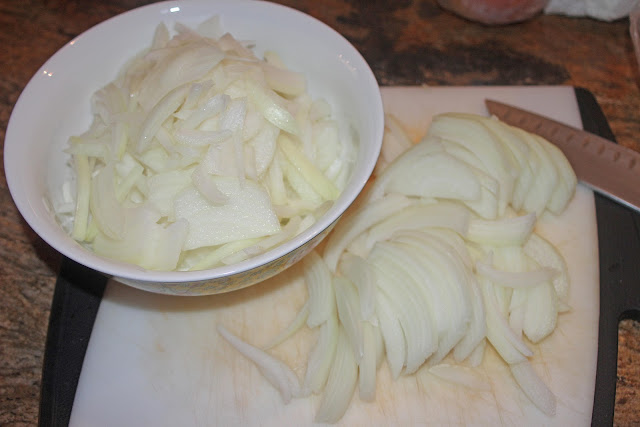 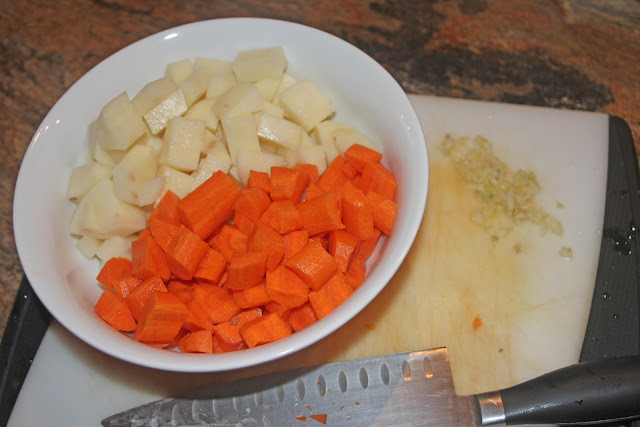 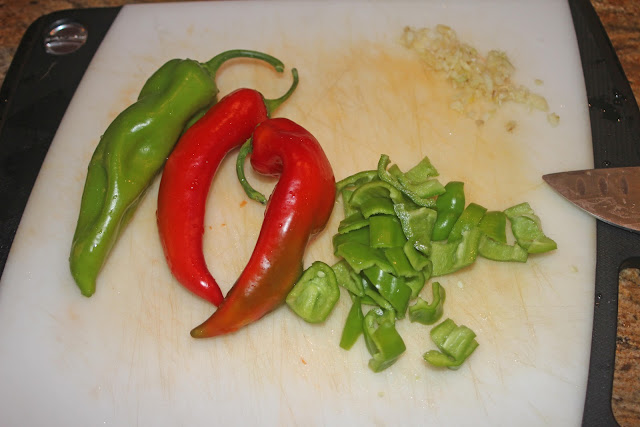 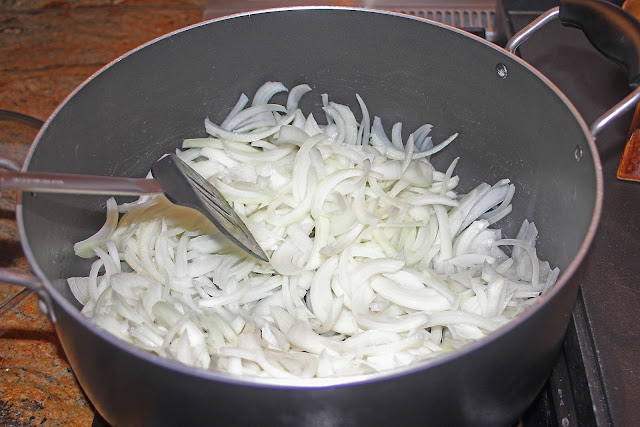 Saute the onions in 4 tbsp. vegetable oil over medium heat. Cover and cook, stirring occasionally, 8-10 minutes until translucent. Do not brown. For a more robust-tasting stew, you can brown 1 thick-sliced bacon, chopped, in the oil before adding the onions. More calories, but more flavor. 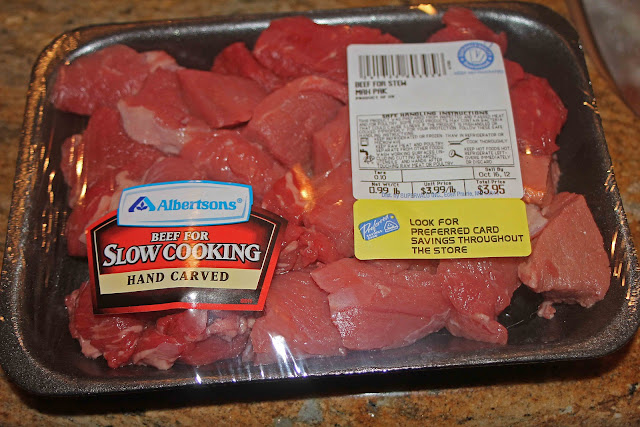 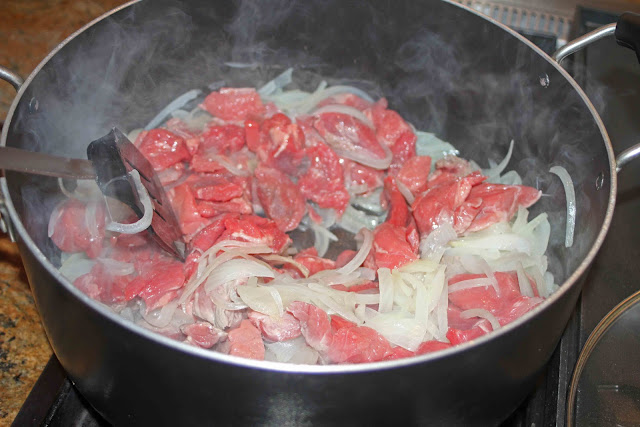 Add the beef, salt & pepper to the onions. 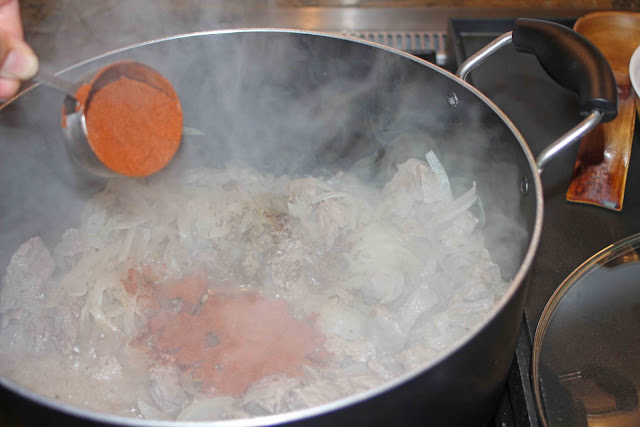 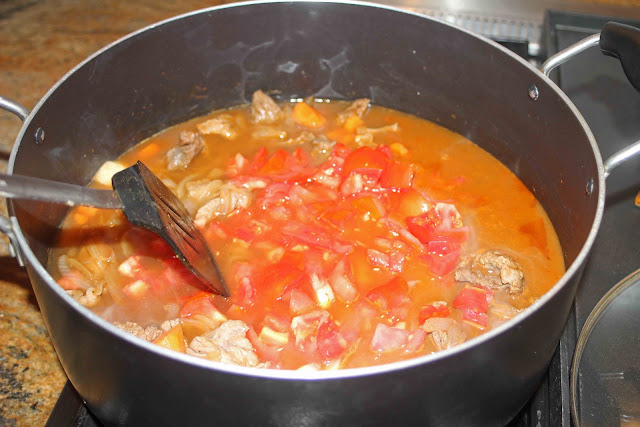 Add the carrots, tomatoes, and 6 cups of water. Bring to a boil, reduce heat, and simmer, covered for about 1 hour or until beef is really tender. 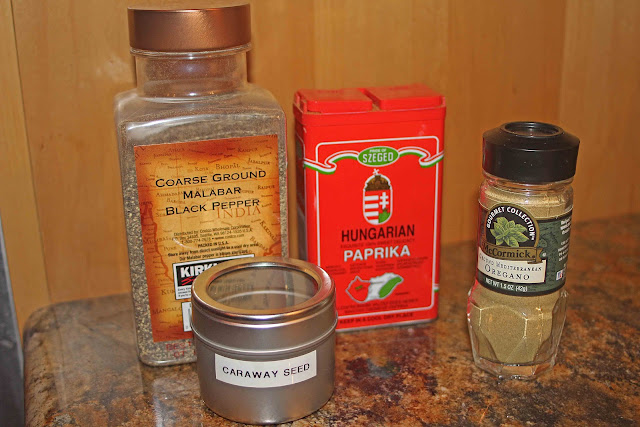 Caraway seed, black pepper, Hungarian paprika, and dried oregano (I didn't have marjoram, so subbed with the oregano). 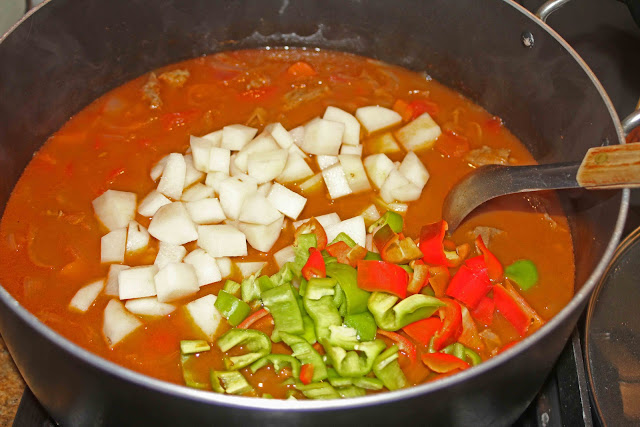 Add the potatoes and peppers and cook uncovered for about 30 more minutes. 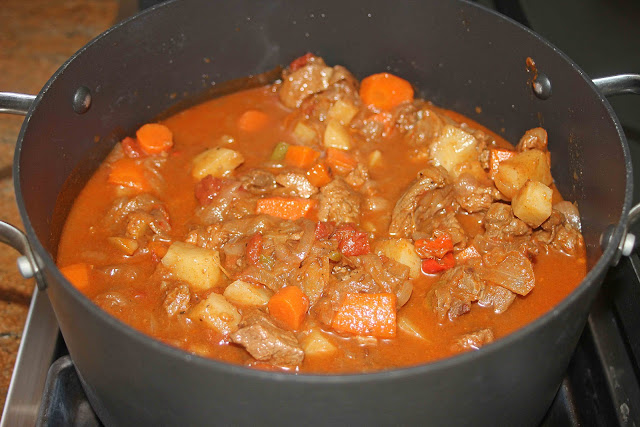 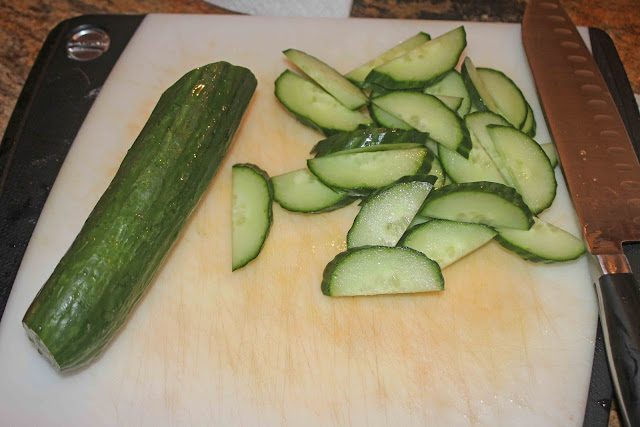 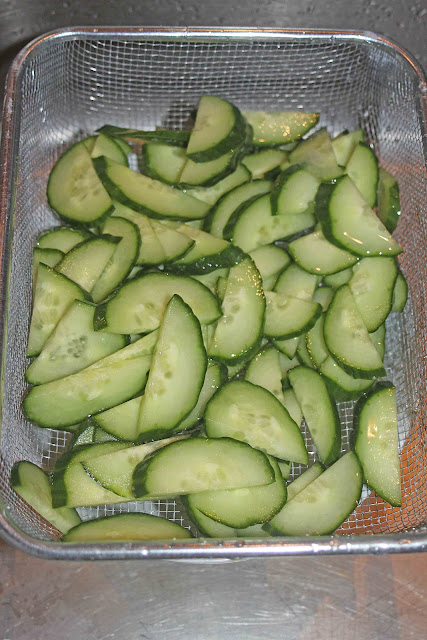 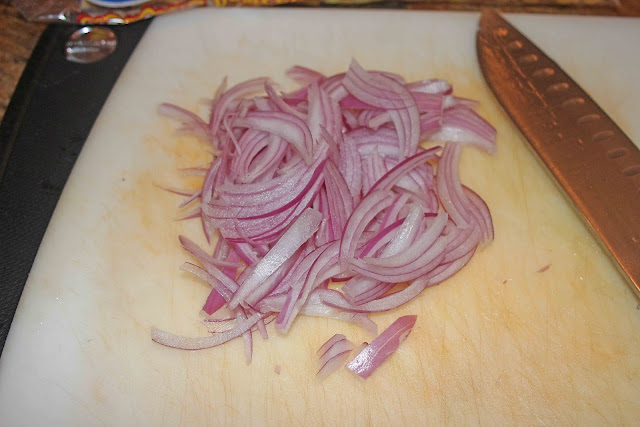 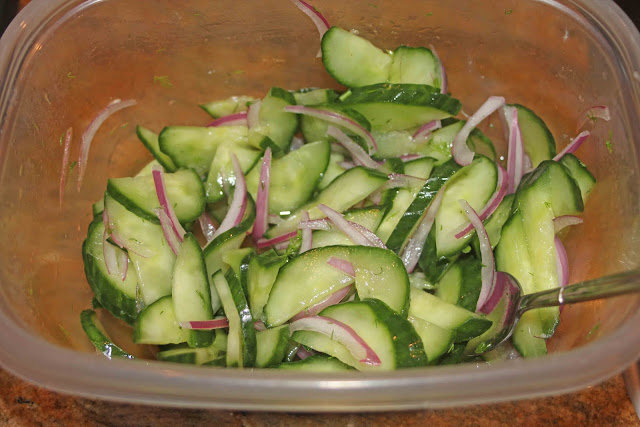 Drain the cucumbers and toss with red onion and the vinaigrette. Marinate for at least 1 hour in the frig before serving. 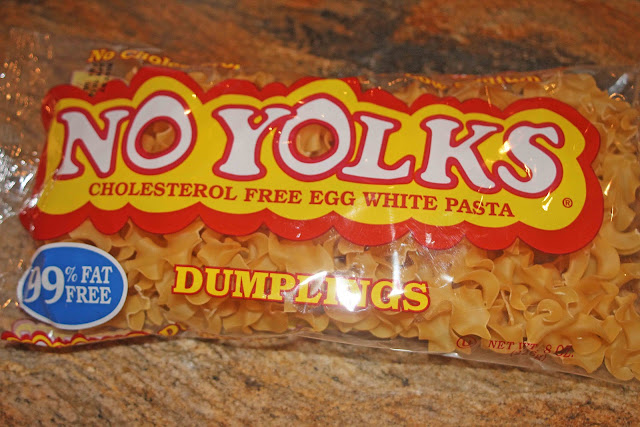 No Yolk Egg Dumplings. A healthier alternative, but if you can't find this in your local market, regular egg noodles will do just fine. 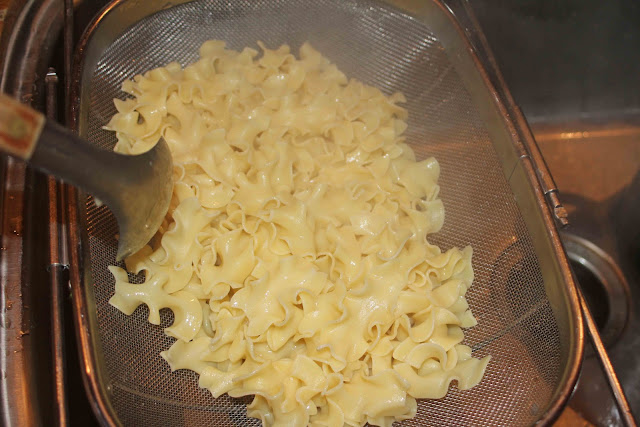 Cook the noodles according to package instructions. Drain (do not rinse), and toss with a little vegetable oil to keep them from sticking together. 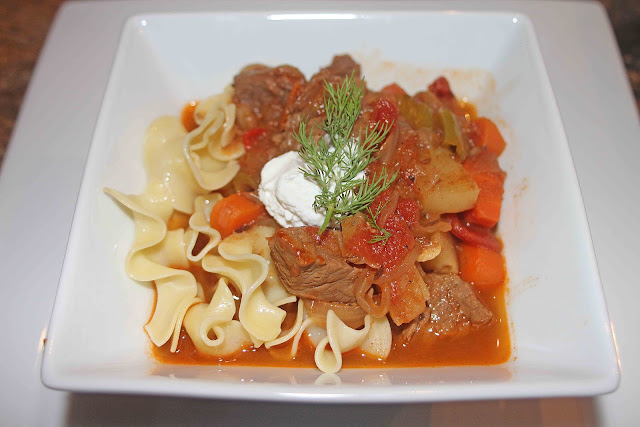 Serve the goulash over hot noodles, topped with a dollop of sour cream & garnished with a sprig of dill or chopped fresh parsley. 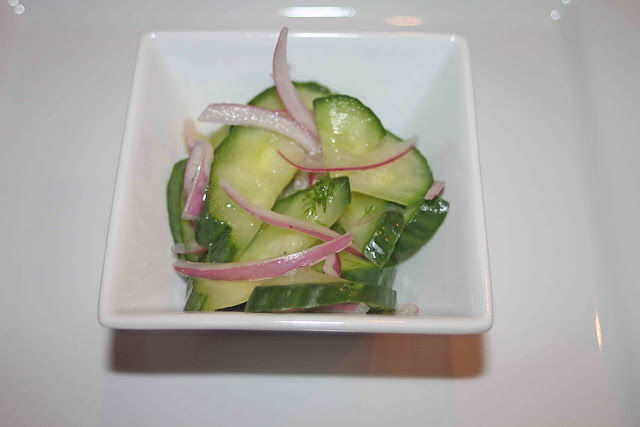 Serve the cucumber salad on the side.
Posted by camissonia at 8:39 PM