Beef Stroganoff is another one of those formerly uber popular American comfort foods that languished for a time in terms of its favorability ratings, but has since resurged in our modern day culinary zeitgeist. If memory serves me correctly, Stroganoff originated in 19th century Russia (named after the VIP Stroganov family) and consisted of thinly sliced beef filets in a sour cream based sauce. The versions we have here in the U.S. diverge somewhat from the original to include things like mushrooms and also the occasional substitution of meatballs for the meat slices. For a brief history of this dish, check out http://en.wikipedia.org/wiki/Beef_Stroganoff.

The following recipe is my first attempt at a meatball Stroganoff that's tossed with egg noodles. It's not perfected yet, but getting there. I think the meatballs are da bomb and can be used in many other applications (the addition of bacon gives them great flavor). The sauce is good, but really rich. In the end, I didn't think there was enough of the sauce, so I ended up adding a can of Campbell's condensed Cream of Mushroom soup and a cup of water to balance it out. Gil loved it, so I guess it wasn't all that bad. I'll be tweaking this recipe in the future to try and lighten it up and make it saucier. Interestingly, a lot of Stroganoff recipes I came across actually use cream of mushroom soup, so that ingredient may be a keeper. Oh, come on - so what if it comes in a can? If it works, don't fix it!!
Meat Balls*:
1 lb. ground beef
1 large onion, finely chopped (reserve 1/3 for the meatballs, 2/3 for the sauce)
2 cloves garlic, finely chopped
1 tsp. kosher salt
1 tsp. black pepper
1 tsp. paprika
1 tsp. granulated garlic
1/2 tsp. cayenne pepper
2 tbsp. fresh parsley, minced
1/2 cups Panko bread crumbs
2 large eggs, lightly beaten
4 strips bacon
2 tbsp. olive oil
Sauce:
8 oz. button or cremini mushrooms, sliced
1/2 cup dry white wine or dry sherry
3 cups low-sodium beef broth
3 tbsp. flour
1/2 cup light sour cream
2 tbsp. fresh dill, chopped
10 3/4-oz. condensed cream of mushroom soup
1 cup water
2 tsp. coarse grain mustard
Salt & pepper
1 lb. pkg. of egg noodles
*This meatball recipe was inspired by one I came across in a complimentary issue I received last year of Cuisine at Home. You can cook up a batch of these meatballs and freeze them for later use. They taste pretty good on their own, but they would work well in other recipes that call for meatballs. One of these days, I'm going to substitute the ground beef with ground turkey to see how they come out.
1. Cook the egg noodles according to package directions (usually takes about 9-10 minutes). Drain and rinse with cold water to stop the cooking. Cover with a damp towel or plastic wrap and set aside.
2. Place the bacon strips in a saute pan over medium heat; cover & cook, turning a couple times, until the bacon starts to crisp. Remove to a chopping board and let cool. Reserve the bacon drippings in the pan. Once cool enough to handle, chop up the bacon into small pieces (but do not mince).
3. In the meantime, saute 1/3 of the chopped onion in the bacon drippings for 4-5 minutes or until translucent. Pour onions into a small bowl and let cool.
4. Once bacon & onion are cooled, combine them with all the remaining meat ball ingredients in a bowl. Mix together well by hand. Form mixture into 1" meatballs and set them on to a foil or parchment paper-lined baking sheet (should make about 42 meatballs).
5. Heat 2 tbsp. of olive oil in a saute pan over medium heat. Add meatballs in a single layer and brown well on all sides, about 5-6 minutes. You will probably need to cook the meatballs in 2 batches. Transfer browned meatballs onto a paper-towel-lined plate.
6. In the same pan, pour off all but 2-3 tbsp. of drippings from the meatballs, then add the remaining chopped onion and saute over medium heat for 5-6 minutes or until translucent. Add the sliced mushrooms and cook until the liquids released from the mushrooms have evaporated, about 8-10 minutes. Increase heat to high and add the white wine or sherry; cook until wine has evaporated. Take 5 tbsp. of the beef stock and blend well with the 3 tbsp. of flour in a small bowl. Add the flour-stock mixture to the onion-mushroom mixture and stir for 1 minute. Add the remaining stock and bring to a boil. Continue cooking until the mixture starts to thicken. Stir in reserved meat balls, sour cream, dill, mustard, cream of mushroom soup and 1 cup of water. Cook for several minutes until all ingredients are well incorporated. Taste and season with an additional salt & pepper as needed. Add egg noodles (you may not need to add the whole batch - add half first, then more as needed), toss well & turn off heat. Keep covered and let sit for 5-10 minutes before serving. 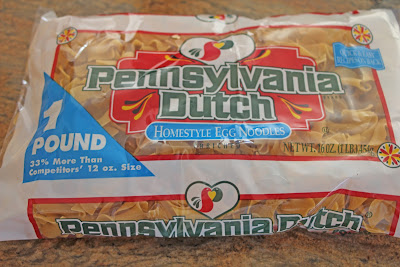 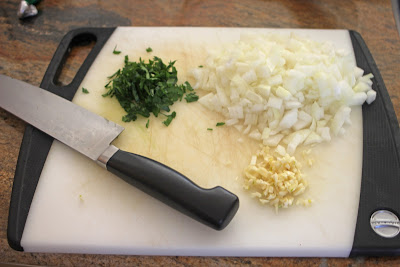 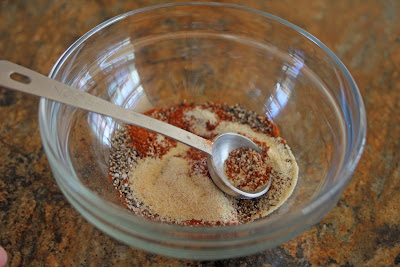 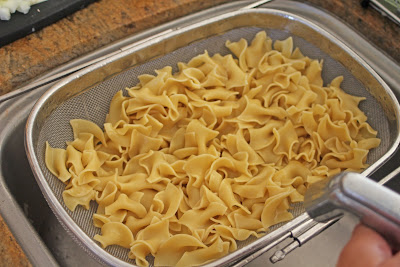 As soon as the egg noodles are cooked, drain them and rinse with cold tap water to stop the cooking. 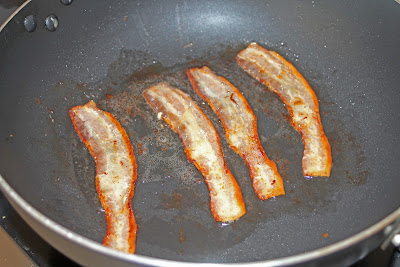 Crisp the bacon, remove to chopping board, let cool, then chop. 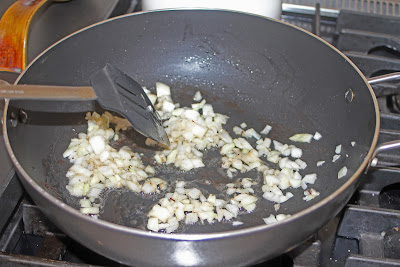 In bacon drippings, saute 1/3 of the chopped onion for about 5 minutes or until translucent. Remove to a small bowl and let cool. 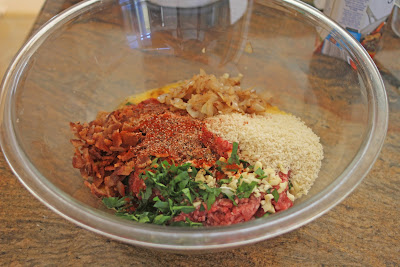 Add chopped bacon and sauteed onions to the rest of the meatball ingredients. Mix together well by hand. 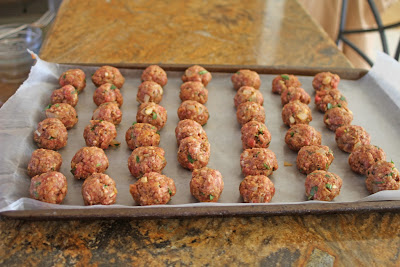 Form into 1" meatballs. Should make about 42. 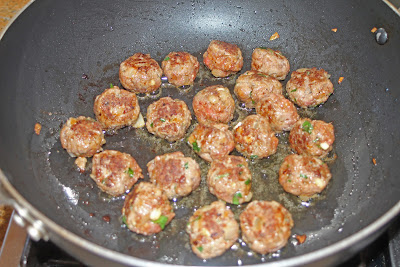 Brown meatballs in 2 tbsp. of olive oil, in 2 batches. 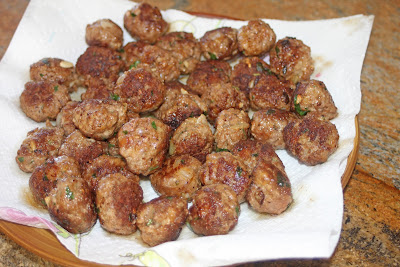 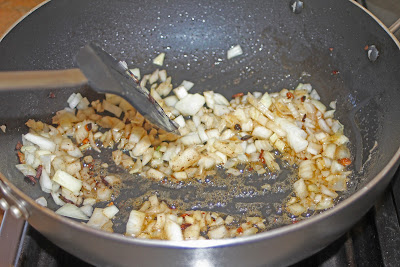 Saute remaining onions in the drippings from browning the meatballs. 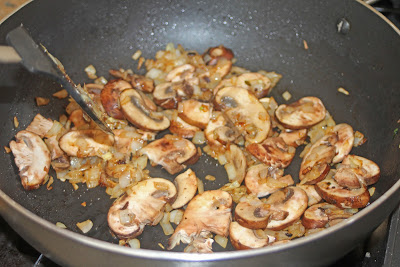 Add sliced mushrooms and saute until all liquid has evaporated. 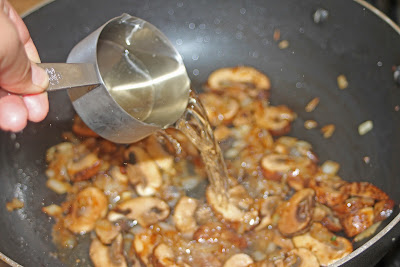 Deglaze with white wine or dry sherry, and cook until all liquid has evaporated. Stir in 3 tbsp. of flour blended with 5 tbsp. of beef stock. 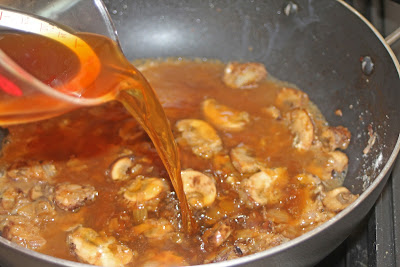 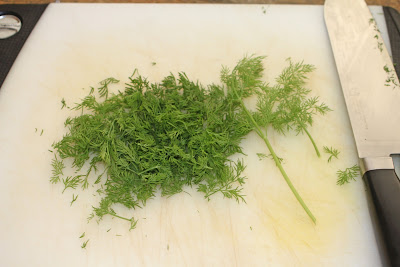 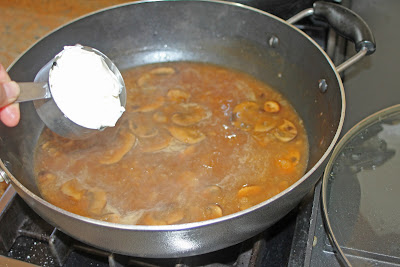 Once sauce has started to thicken, stir in sour cream, cream of mushroom soup and 1 cup of water. 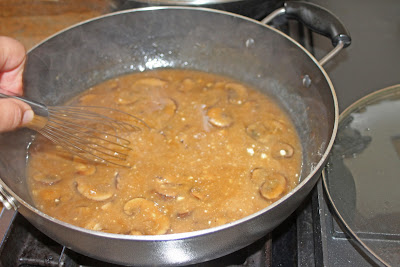 Use a whisk to stir the sauce (easier to remove any lumps). 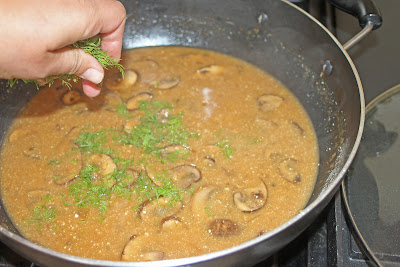 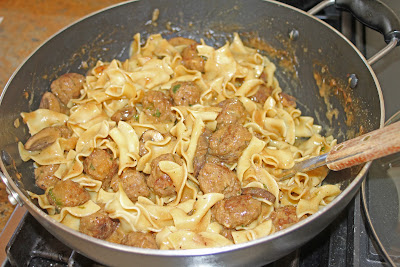 Stir in meatballs, mustard, and noodles. Season with salt and pepper, as needed. 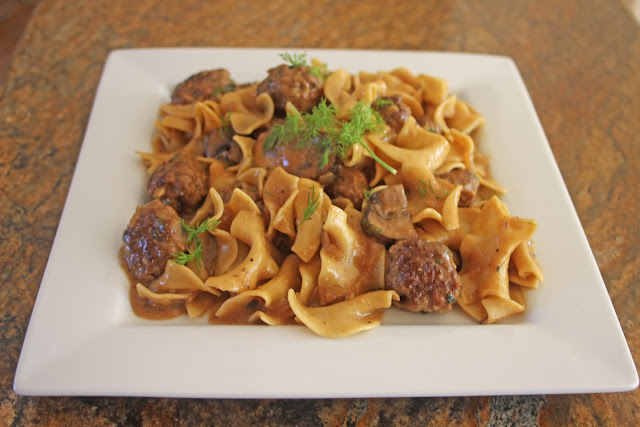 Posted by camissonia at 7:12 PM