In my quest to make a pumpkin dessert that is not pumpkin pie for the holidays, I came across this version of pumpkin cheesecake from the Food Network kitchen on their website. It is basically their "Almost Famous'" version of pumpkin cheesecake from The Cheesecake Factory. Being a cheesecake, it's quite decadent of course, but the texture is creamy smooth and the filling not overly sweet. The only changes I made to the original recipe was to reduce the amount of cinnamon (from 2 1/2 tsp. to 2 tsp.). Great served with some fresh whipped cream and a sprinkling of chopped toasted pecans.

1. Position rack in oven to the center and preheat to 325F.

2. Melt the butter (I just pop the butter in a microwave safe bowl and heat for 40 seconds or until just melted).

4. Combine the graham cracker crumbs, 1/4 cup of the sugar, the remaining melted butter, and a pinch of salt. Stir together with a fork until combined.

5. Pour the graham cracker mix into the springform pan, pressing the crumb mixture evenly and firmly across the bottom and up the sides of the pan.

6. Place the pan in the oven and bake 15-20 minutes until the crust is golden brown. Remove from the oven and let cool completely on a rack.

7. In the meantime, bring a large kettle or pot of water to a boil. Keep the oven temperature at 325F.

8. In a large bowl, beat the cream cheese until smooth. Add the remaining 1 1/2 cups sugar and beat until just light, scraping down sides of bowl as needed. Beat in the sour cream, then add the pumpkin, eggs, vanilla, spices and 1 tsp. salt. Beat until the mixture is just combined (do not overbeat). Use a spatula to scrape up any of the cream cheese from the bottom of the bowl that didn't get mixed in, and gently fold into the mixture.

12. Take the cheesecake out of the frig to room temp 30 minutes before serving. Slice and serve with sweetened whipped cream and a sprinkling of chopped toasted pecans. 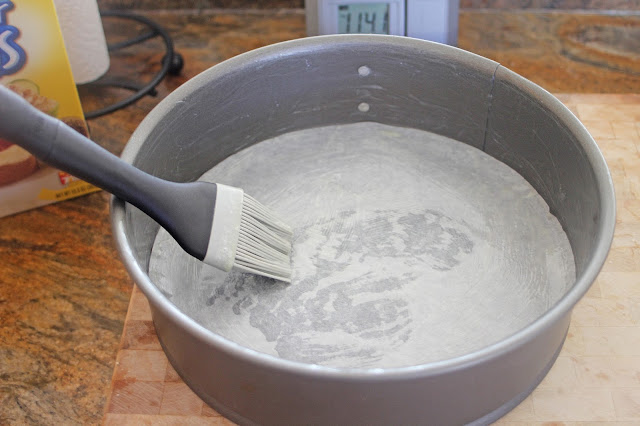 Place a round of parchment onto the buttered bottom of the springform pan, then lightly brush the top of the parchment and sides of the pan with a bit of melted butter. 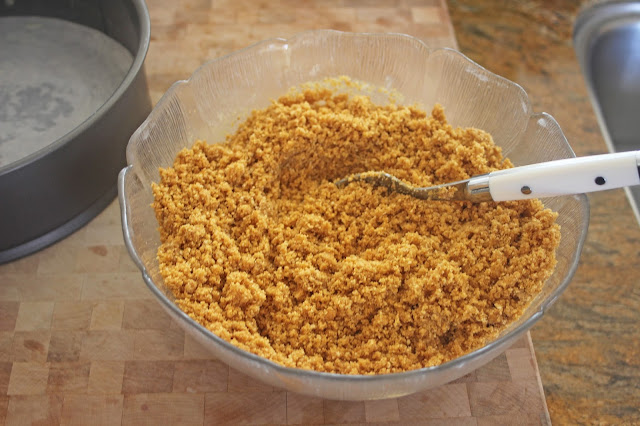 Combine graham cracker crumbs, 1/4 cup sugar, the remaining melted butter, and a pinch of salt for the crust. 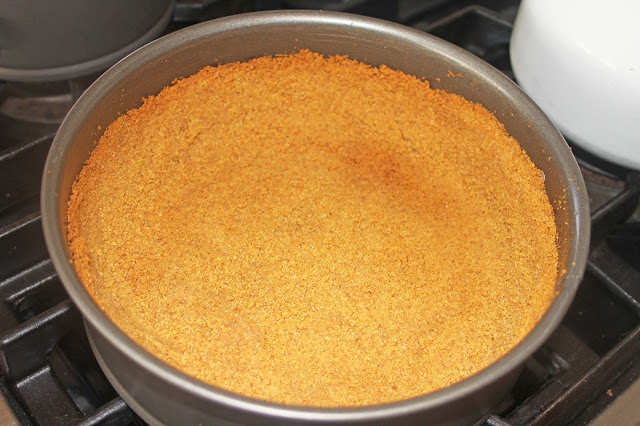 Press the crumb mixture firmly and evenly along the bottom and up the sides of the pan and bake at 325F 15-20 minutes until golden. Remove to a rack and let cool completely. 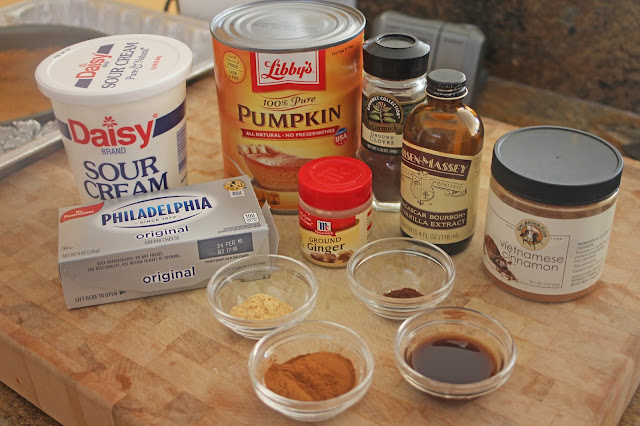 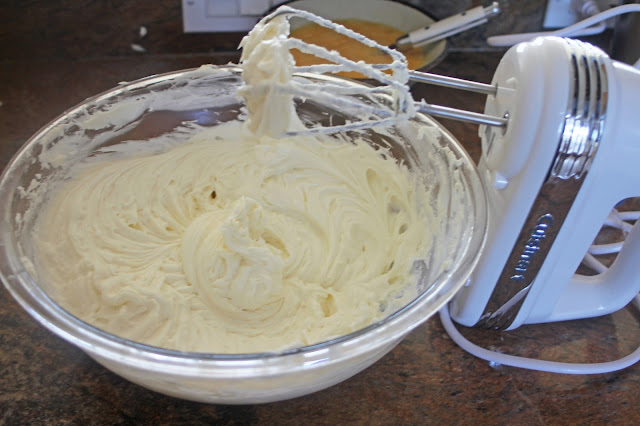 Beat the cream cheese until smooth, then add the sugar and continue beating until the mixture is just light. 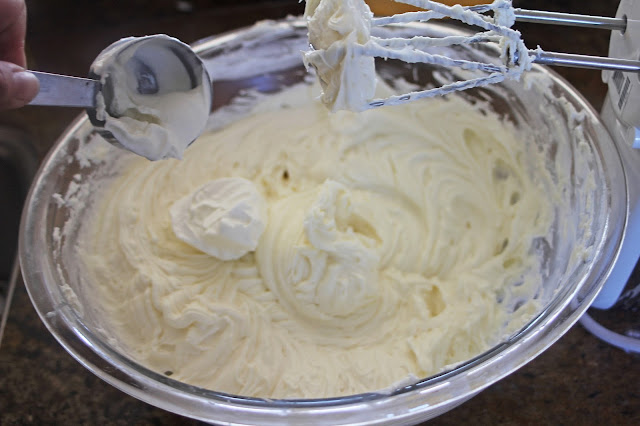 Beat in the sour cream. 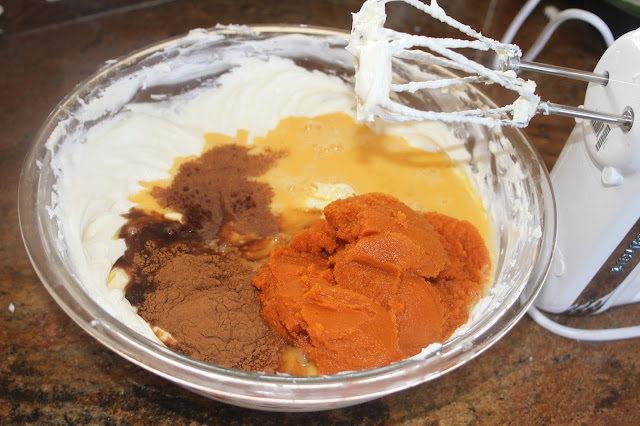 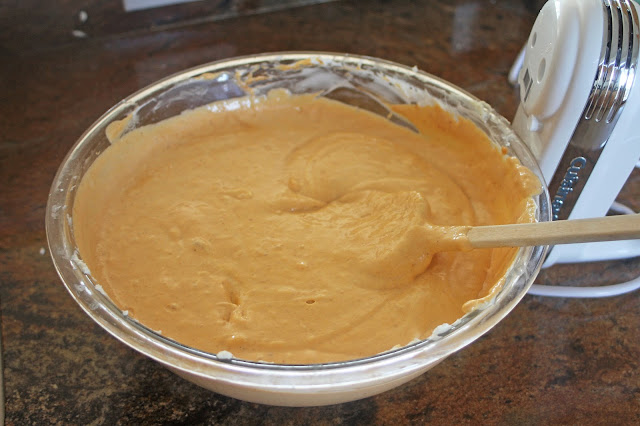 Beat until the ingredients are just combined - do not overbeat! I like to use a rubber spatula to run across the bottom of the bowl and fold in any unmixed cream cheese with the rest of the mixture. 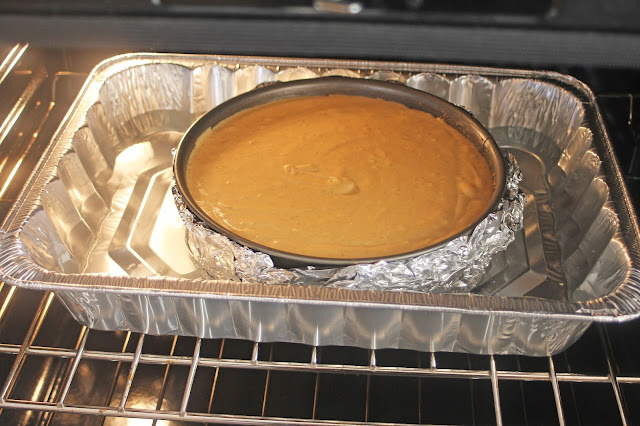 Wrap the outside of the pan well with heavy duty aluminum foil, pour in the filling, then place the cheesecake in a large roasting pan. Pour very hot water into the roasting pan until it comes up about halfway up the sides of the springform pan. Bake 1 1/2 hours to 1 hour 45 minutes or until the cheesecake is set along the outside, but still slightly jiggly in the middle. Turn off heat, open oven door briefly, then let cheesecake sit in the oven another hour before removing to a rack to cool completely.
Posted by camissonia (Arleen) at 9:05 PM