Well after our trip to the UK this past June, British food (especially pub fare) is actually really starting to grow on me. I've already done a rendition of Bangers and Mash, and now here's my version of Steak, Ale and Mushroom Pie. My first taste of this dish was at The Village Inn in Mumbles, Swansea, Wales http://www.villageinnmumbles.com/dine.html - think hearty beef stew (minus the potatoes) in pie form. I opted to use puff pastry dough rather than making the traditional pie crust, used sirloin instead of the usual beef chuck, and Newcastle brown ale rather than a dark ale such as Guinness. Can't go wrong with that! I think I'm gonna try my hand at Bubble and Squeak next time around. 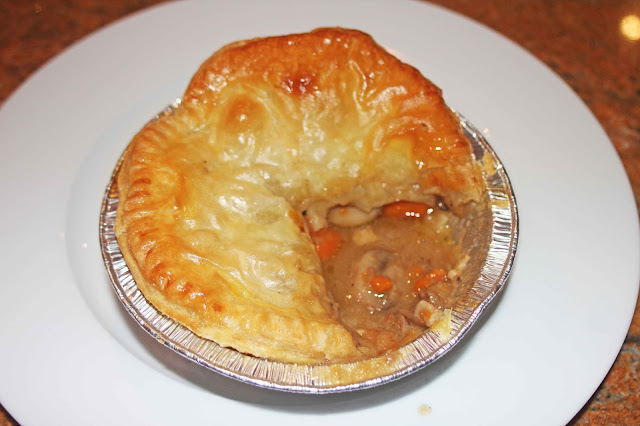 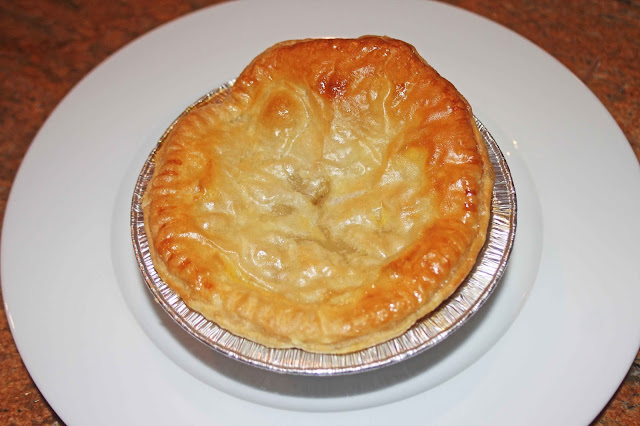 1. Heat 2 tbsp. vegetable oil in a cast iron or other heavy pot over medium high heat. Add the sirloin cubes, season with salt and pepper, and brown on all sides (cook in batches if needed so as not to overcrowd the pot - otherwise, the meat will steam and not brown).

2. Remove the meat to a plate and set aside (meat does not have to be cooked through, just browned on the outside).

3. If the pot is dry, add a little extra oil and saute the chopped onion, carrots and garlic over medium high heat until the veggies have softened. Stir in 2 tsp. of brown sugar. Sprinkle in 2 tbsp. of flour and stir well to combine.

4. Add the ale or beer and the beef broth. Bring up to a boil and season with salt and pepper.

5. Tie the bay leaves, thyme sprigs and parsley sprigs together in a bundle with kitchen twine (aka, bouquet garni) and drop into the pot. Remove 1/4 cup of the cooking liquid and set aside. Reduce the heat to a simmer, cover, and simmer for 2 hours or until the meat is really tender.

6. In the meantime, heat 1-2 tsp. of oil in a saute pan over medium high heat. Add the diced bacon and sliced mushrooms. Cook, stirring frequently, until the bacon and mushrooms are lightly browned and cooked through. Add the mushroom-bacon mix to the pot of beef about 1 1/2 hours into the beef's total cooking time and continue simmering the mixture, covered.

7. In a small bowl, combine 1/4 cup of the reserved cooking liquid (should be cooled by now) with 3 tbsp. of flour and mix well.

8. Bring the beef-mushroom pot to a boil and stir in the broth-flour mixture. Stir constantly until the mixture has thickened. Turn off heat and remove the herb bundle/bouquet garni. Let the mixture cool and refrigerate before using. It's actually best to let this sit in the frig one or two days before filling the pies so that the flavors have time to meld. You can also freeze the mixture from 2-3 months before using.

10. Cut out six 5" rounds from the puff pastry sheets.

11. Ladle the beef-mushroom mixture into 6 pie tins and top each with a pastry round, crimping the edges. * Use a paring knife to make a couple slits into each pastry crust; use the tines of a fork and press down on the edges of the pastry crust to seal. Brush the top with the beaten egg yolk.

12. Place the pie tins onto a foil-lined baking sheet and bake for 30 minutes or until the crust is browned and the filling bubbling. Remove and serve right away while still hot.

*You can also freeze the unbaked pies: cover well with plastic wrap and then foil. Take them out of the freezer, let thaw, brush with egg wash, and then bake as noted above. 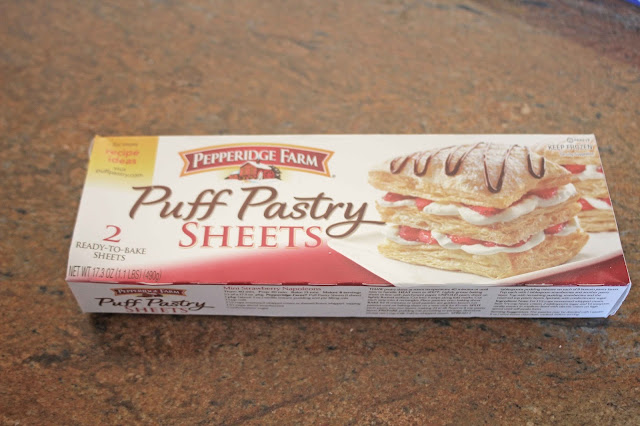 Puff pastry sheets, readily available in the frozen food section of most markets. 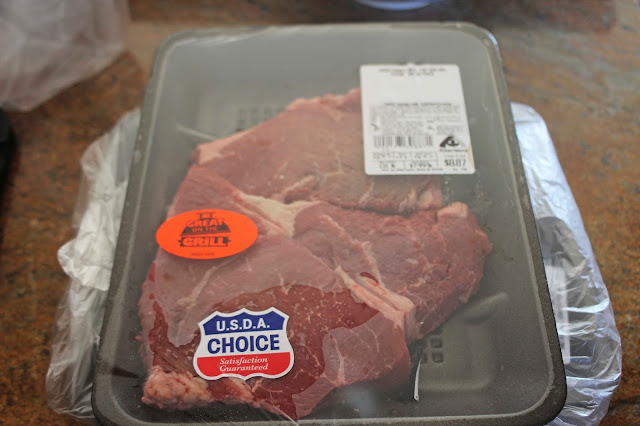 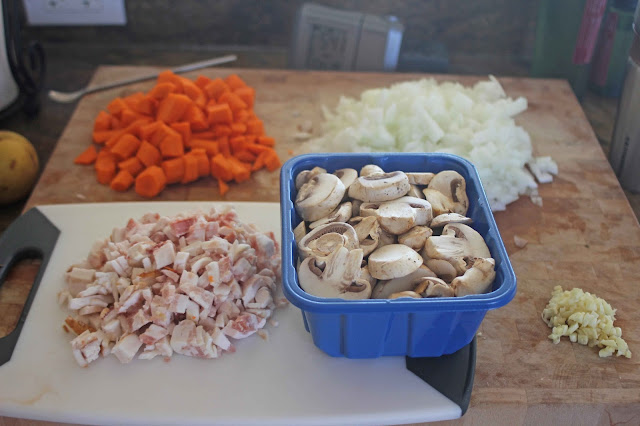 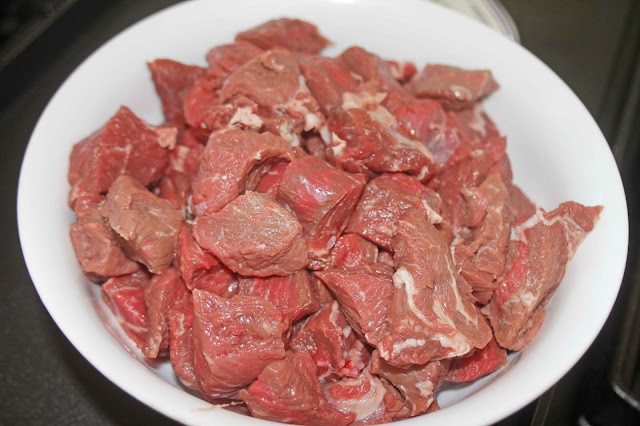 Cut the sirloin into large chunks. 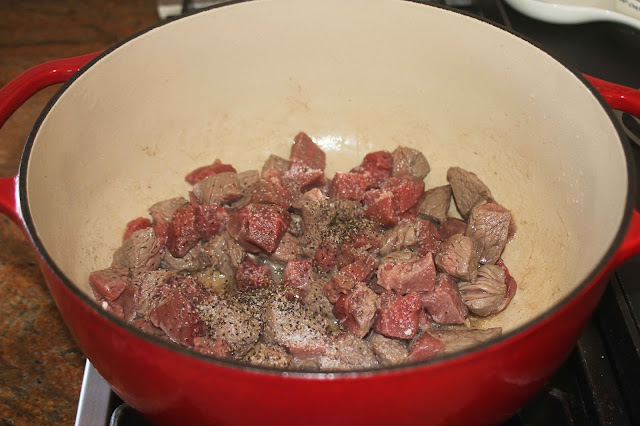 Brown the beef cubes and season with salt and pepper. Remove the meat and set aside. 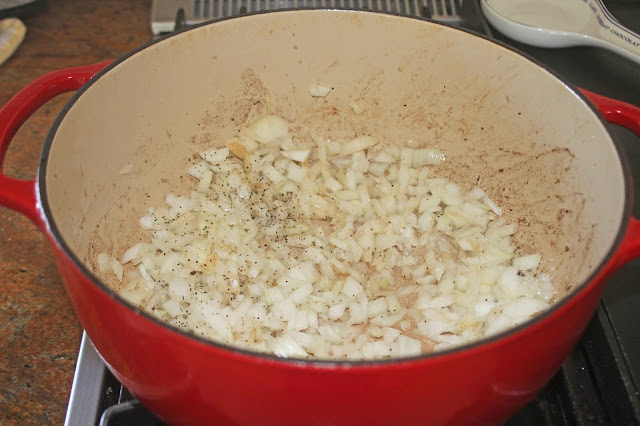 In the same pot, add the diced onion (if the pan is dry, add a little extra oil). 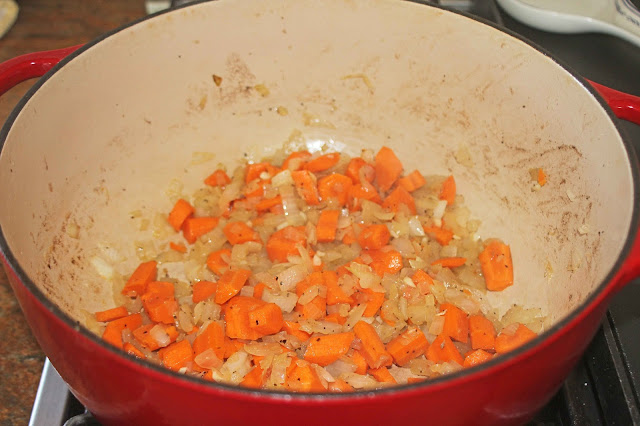 Add the diced carrots and garlic, and cook until the veggies have softened; stir in the brown sugar. 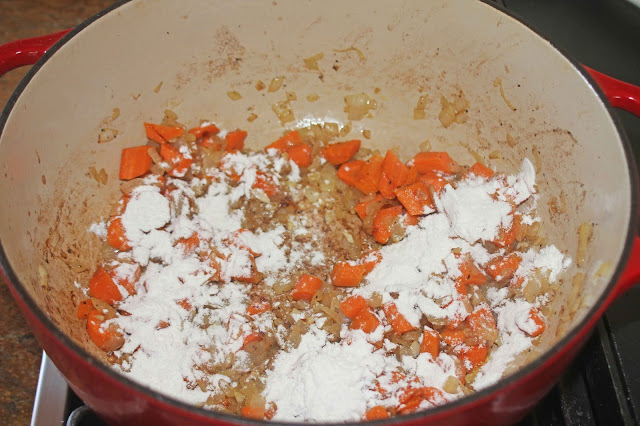 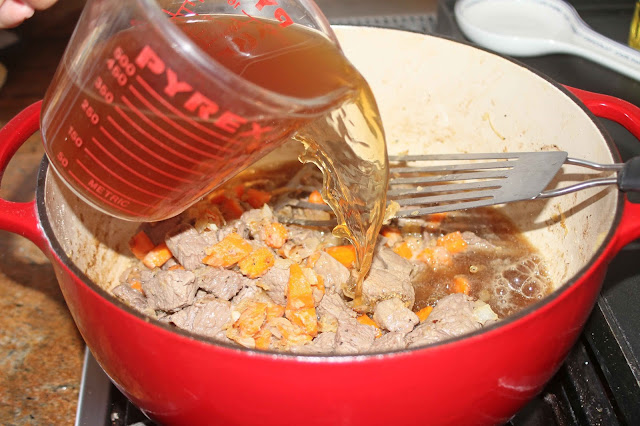 Add the ale and beef broth and bring to a boil. 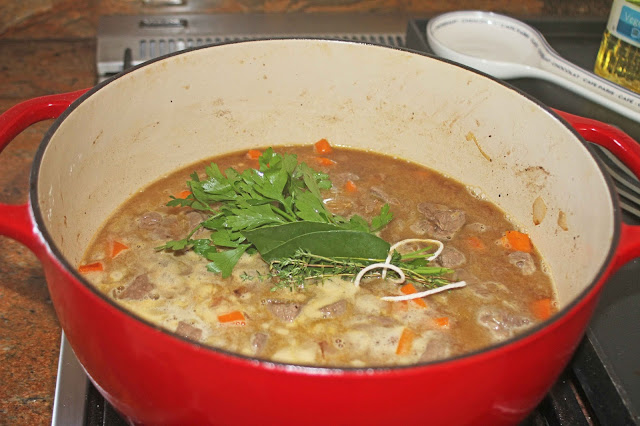 Add the bundle of bay leaves, thyme and parsley (bouquet garni).
Reserve 1/4 cup of the cooking liquid.
Bring to a boil, cover, and simmer for 2 hours or until the beef is tender. 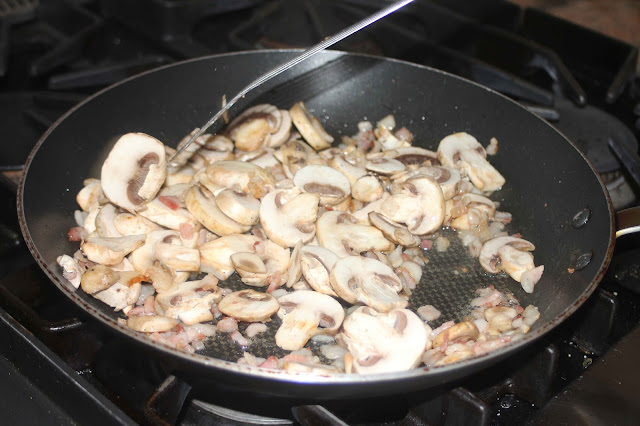 In the meantime, saute the mushrooms and bacon. 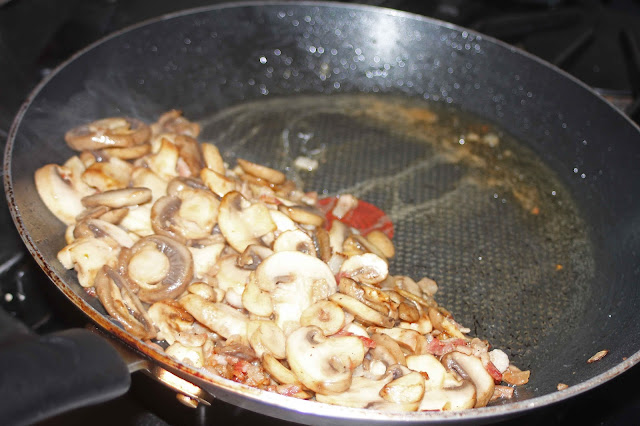 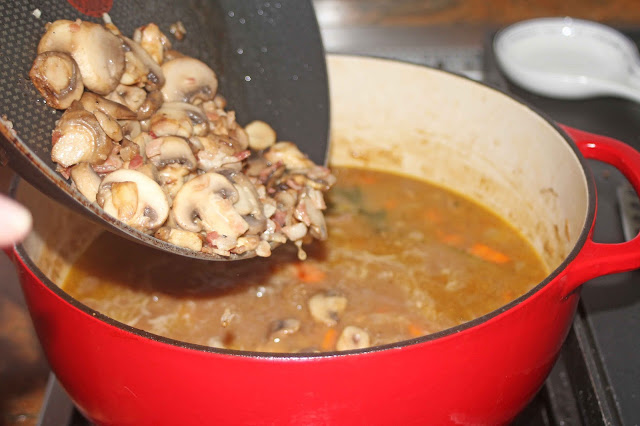 When the mushrooms and bacon are cooked through, add to the pot of beef (about 1 1/2 hours into the cooking time). Continue cooking on simmer, covered, for another 30 minutes. 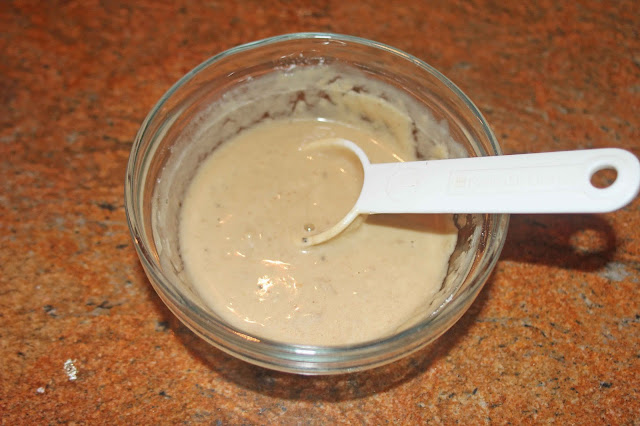 In a small bowl, mix 1/4 cup of the reserved cooking liquid with 3 tbsp. of flour. 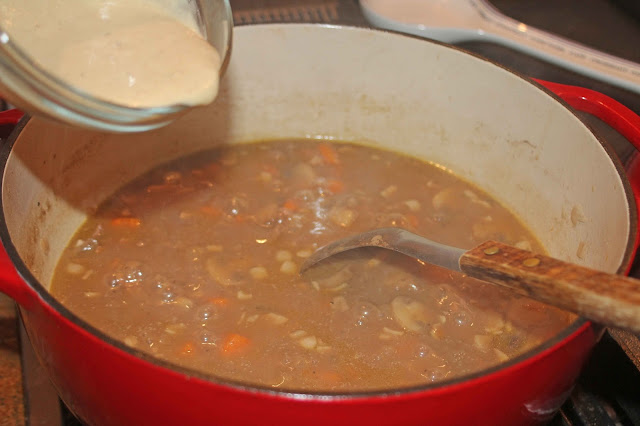 After 2 hours of cooking, bring the pot back up to a boil and stir in the flour-stock mixture. Stir constantly for a few minutes until the mixture has thickened. 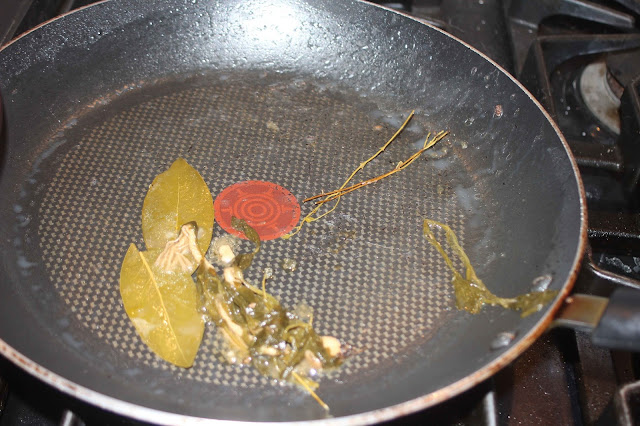 Remove the herb bundle/bouquet garni from the pot. 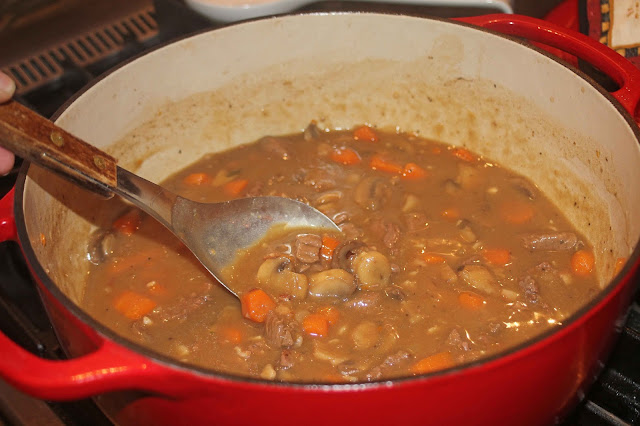 Let the mixture cool and (ideally) refrigerate 1-2 days before using to let the flavors meld. 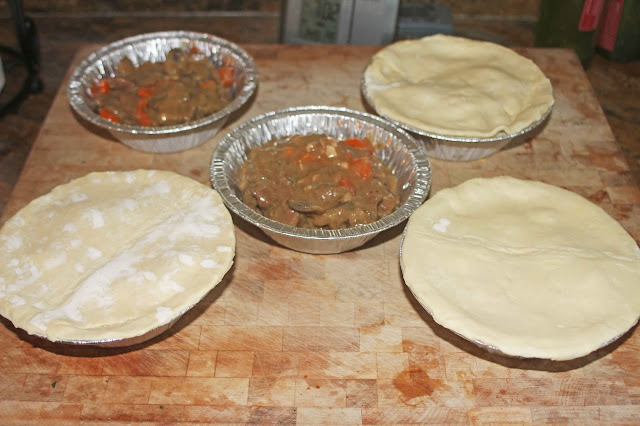 Ladle the beef-mushroom mixture into the baking tins and cover each with a round of pastry dough. 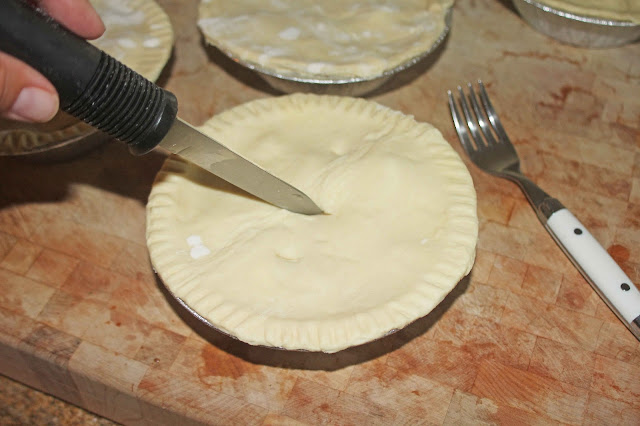 Cut a couple slits into each pastry crust to allow the pie to vent during baking. 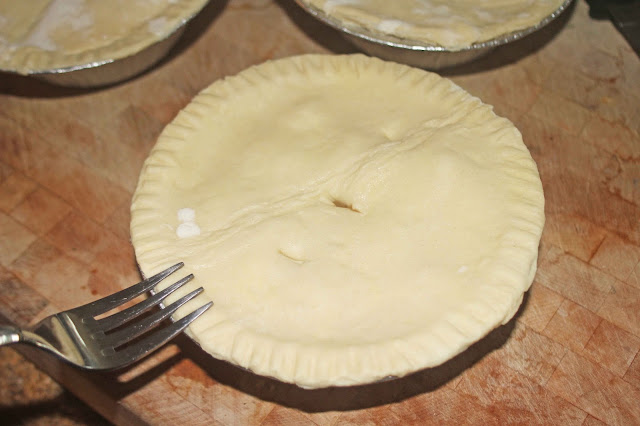 Use the tines of a fork to seal the edges of the pastry crust. 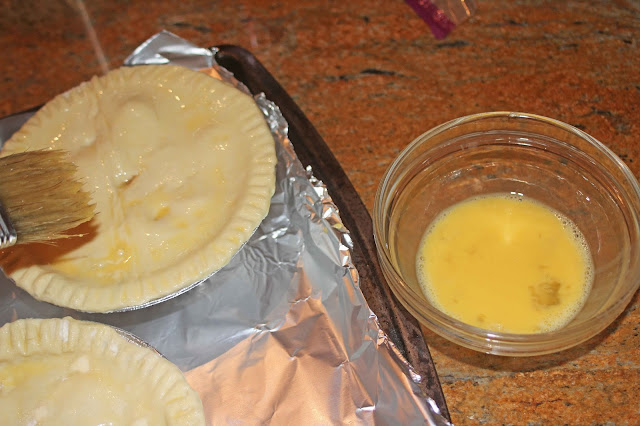 Brush the top of each pie with egg wash (1 beaten egg). 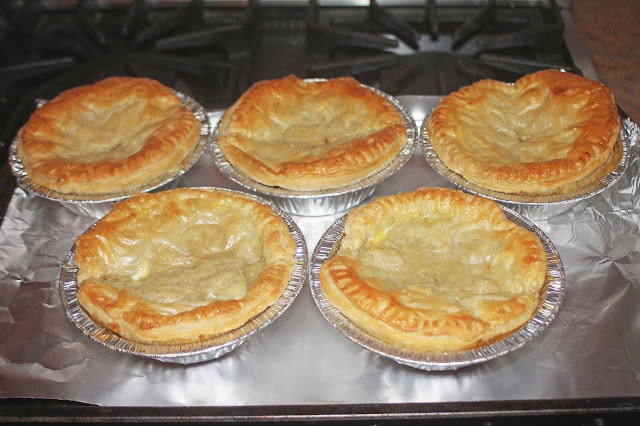 Place the pies onto a foil-lined baking sheet and bake at 400F for 30 minutes or until the pies are nicely browned. Serve right away while they're hot. 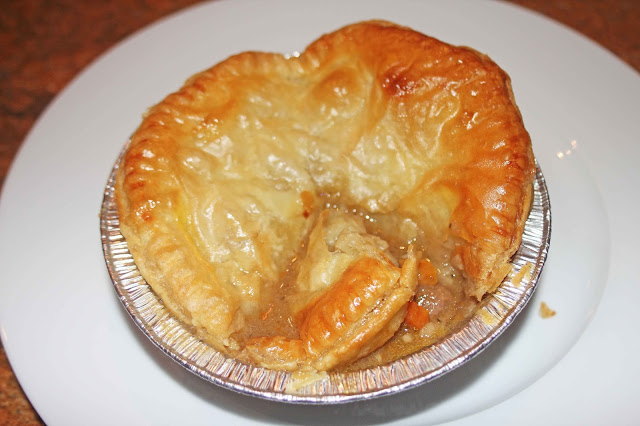