Pasta with Chicken & Bacon in a Tomato, White Wine, and Basil Cream Sauce

After binge-reading my latest batch of vintage (aka used) cookbooks that I recently bought from Amazon, I came across this little gem from 2001 Dear SOS: Favorite Restaurant Recipes from the Los Angeles Times by Rose Dosti. This was the third in a series of Dear SOS cookbooks published since 1994 - a compendium of their most popular reader-requested restaurant recipes that appeared in the LA Times food section. Here's my adaptation of the Fusilli with Sun-Dried Tomato Cream from Misto Caffe in Torrance which, unlike some of the featured restaurants in the cookbook (Hamburger Hamlet, Velvet Turtle, Ritz-Carlton Huntington Pasadena, Chasen's, Little Joe's LA, The Broadway Department Store LA, etc.) is still open as of today. My main changes were adding 3 fresh tomatoes in addition to the sun-dried, using fresh rather than roasted garlic, and cavatappi (corkscrew) pasta rather than fusilli, even though you can substitute whatever other pasta floats your boat. The quote for this recipe in the cookbook is "unforgettably rich and creamy," which it really is! 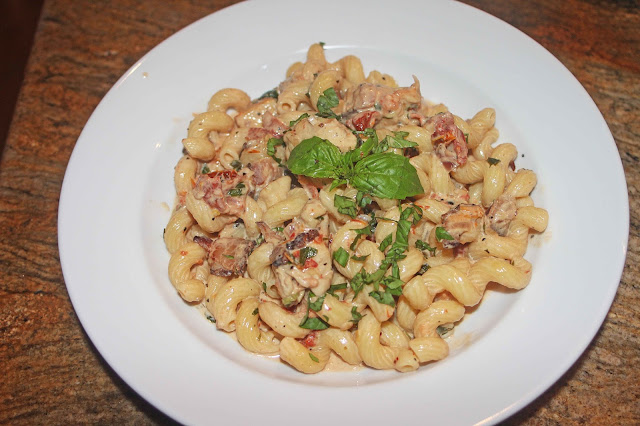 1. Bring a large pot of salted water to a boil and cook the pasta according to package instructions.

2. In the meantime, heat 1 tbsp. olive oil in a saute pan over medium high heat and cute the onion, garlic and bacon until the onion in translucent and the bacon just starting to brown. Add the chicken and cook until lightly browned and cooked through. Season with salt and pepper.

3. Add the chopped fresh tomatoes, sun dried tomatoes, wine, and most of the basil (reserve 1-2 tbsp. for garnish). Bring to a boil, then reduce heat. Simmer for 8-10 minutes.

4. Add the heavy cream and 2 tbsp. parmesan and bring sauce up to a boil. Cook until the sauce starts to thicken. Toss in the drained pasta and stir well, cooking another 1-2 minutes. Turn off heat and adjust for seasonings (salt & pepper). If desired, stir in red pepper flakes. If the sauce is too thick, add a few spoonfuls of the pasta cooking water to thin out.

5. Plate the pasta and garnish with the reserved julienned basil and extra parmesan. 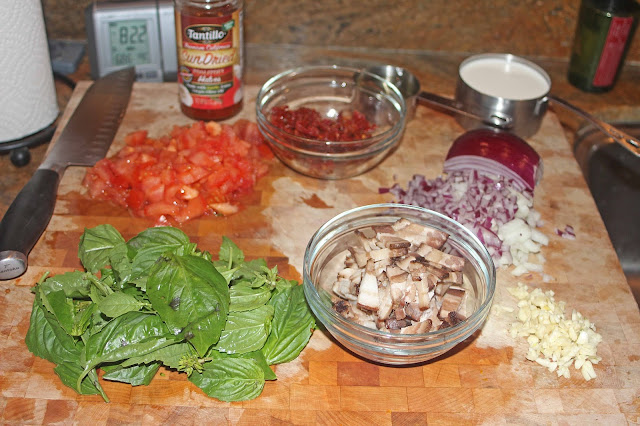 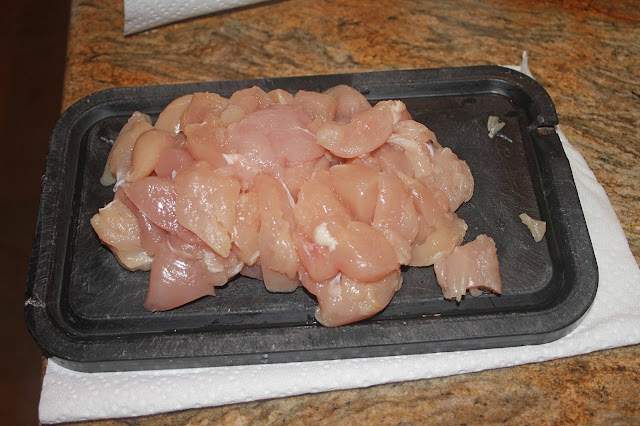 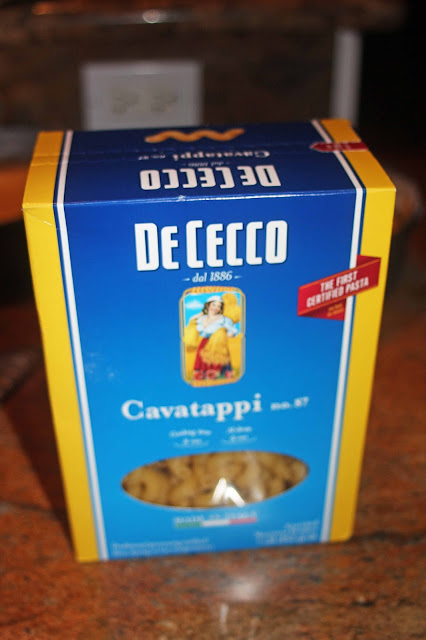 Cavatappi (corkscrew) pasta. Feel free to substitute with farfalle, fusilli, or any other pasta
that floats your boat. 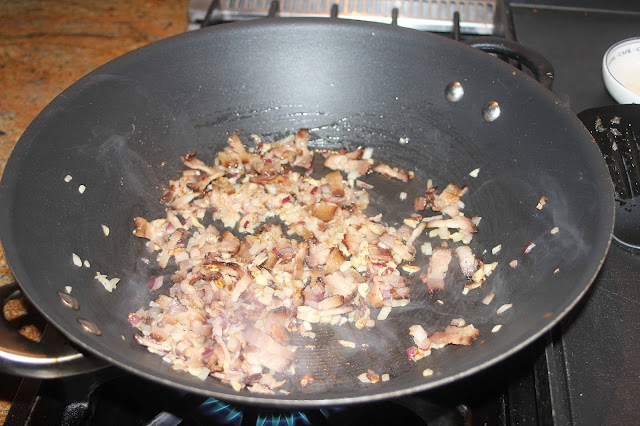 Saute the onion, garlic and bacon until the onion is translucent. 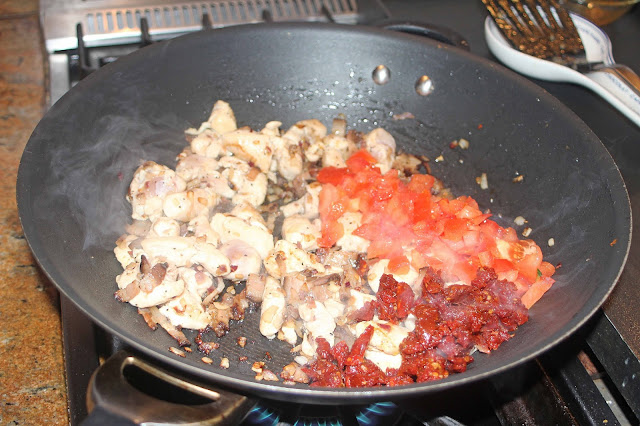 Add the fresh and sun dried tomatoes. Stir in the chicken and cook until lightly browned. 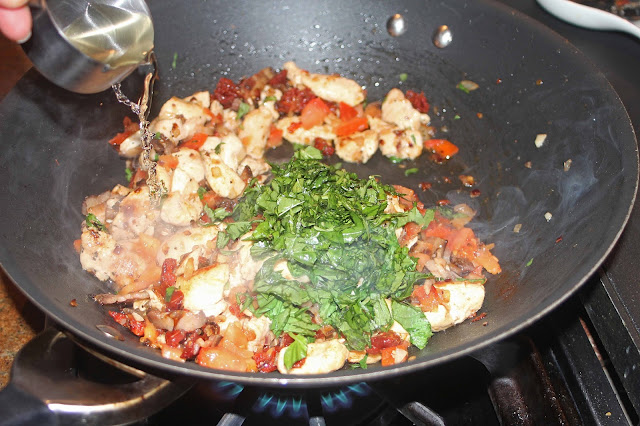 Add most of the julienned fresh basil (reserve 1-2 tbsp. for garnish) and white wine, bring to a boil, and reduce heat to simmer. 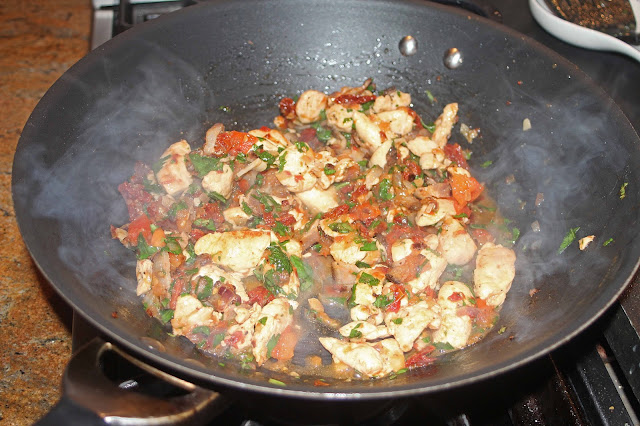 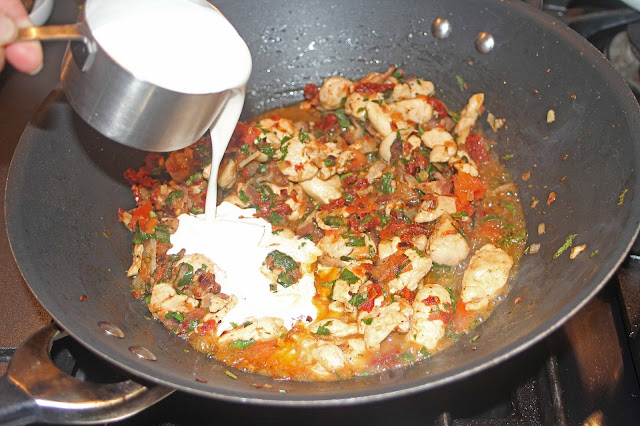 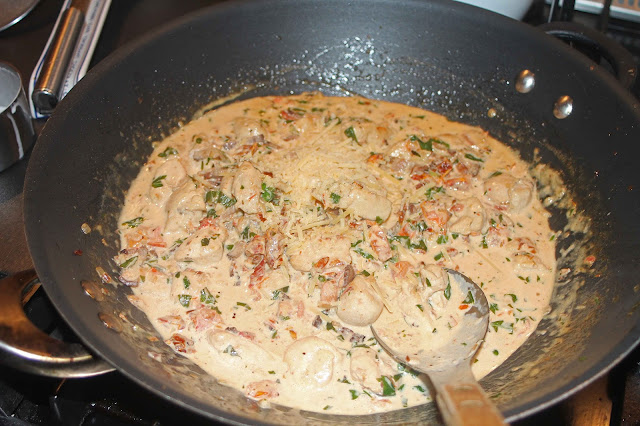 Cook until the sauce starts to thicken. 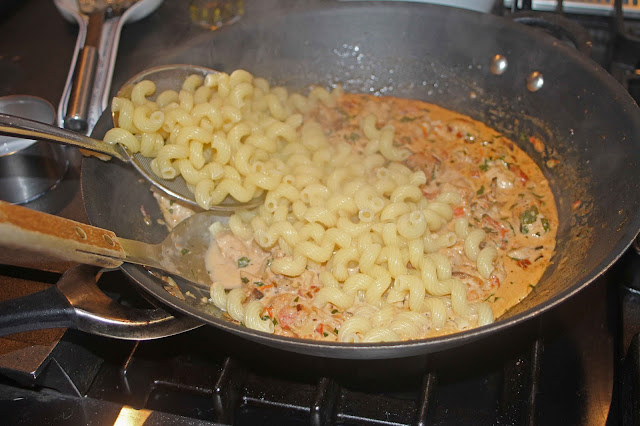 Stir in the cooked pasta, toss well, and simmer another 1-2 minutes. If the sauce is too thick, add a few spoons of the pasta cooking water. Season with red pepper flakes and additional salt and pepper as needed. 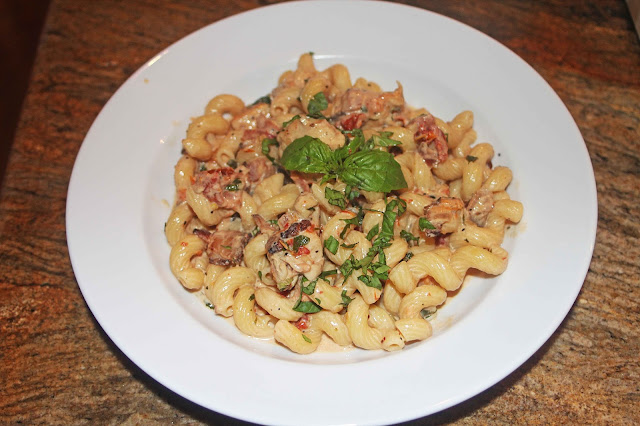 Plate and garnish with the reserved basil and additional shredded parmesan, if desired.