Chicken Tikka Masala is a ubiquitous and very popular dish in many an Indian restaurant outside of India proper. I've read that the recipe actually originated in the UK and is now widely served in Pakistani and Bangladeshi restaurants throughout the UK and North America. "Tikka" refers to the chicken pieces and "Masala" refers to the spice blend, which also incorporates tomatoes, cream and/or plain yogurt. I adapted this recipe from Shubhra Ramineni's cookbook Entice with Spice but instead of grilling the marinated chicken (which I did on my first try, but the meat was not as juicy/tender as I would have liked it to be), I pan-fried it until just done, then added it to the masala sauce just before serving. I like to serve this dish with an aromatic basmati rice recipe that I had adapted from Shubhra's same cookbook. The ingredient list may seem long, but it's all a matter of measuring and prepping beforehand (aka "mise en place"). Once all the ingredients are prepped, the cooking itself takes no time at all. The same principal applies to Chinese cooking. 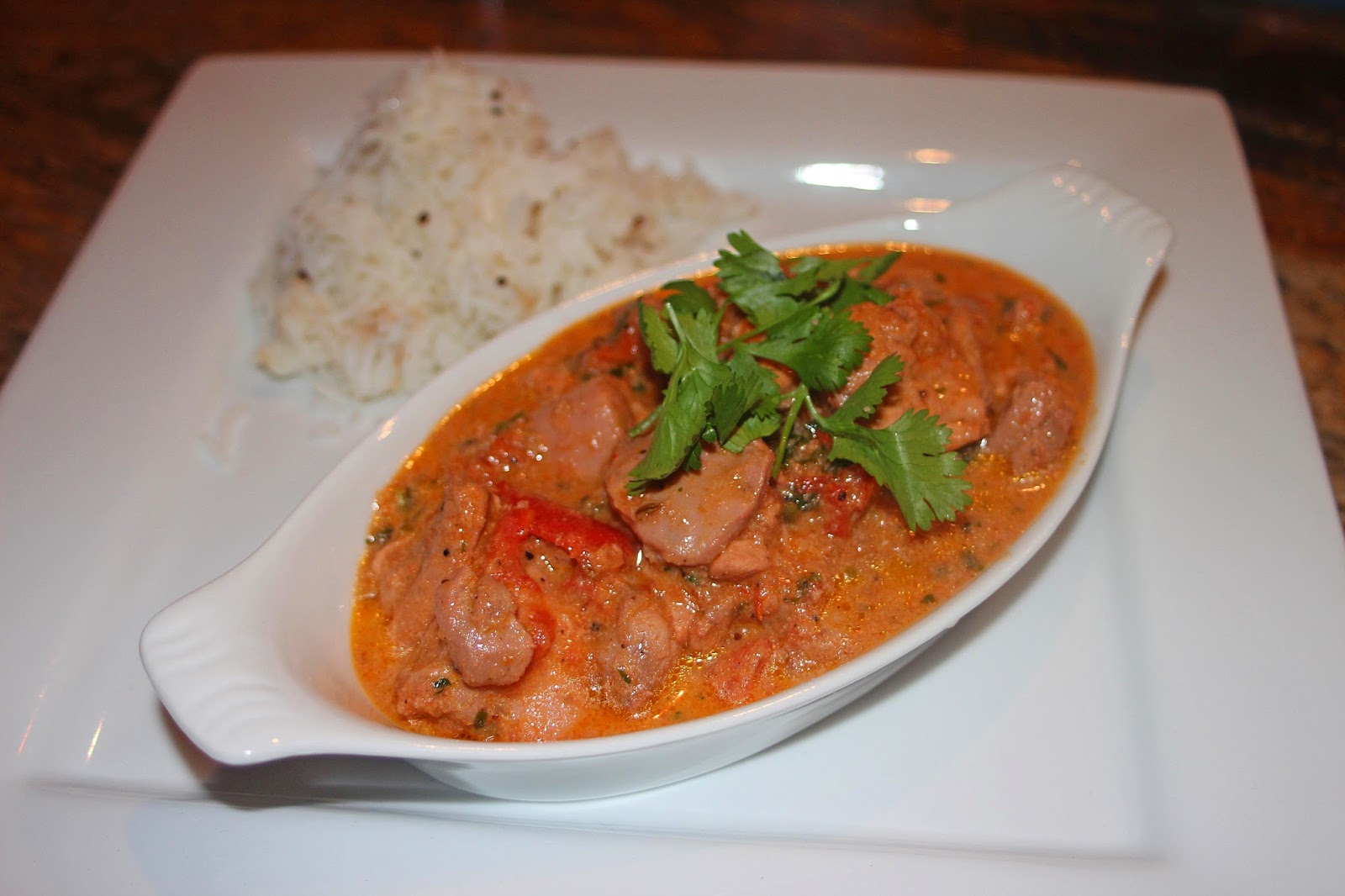 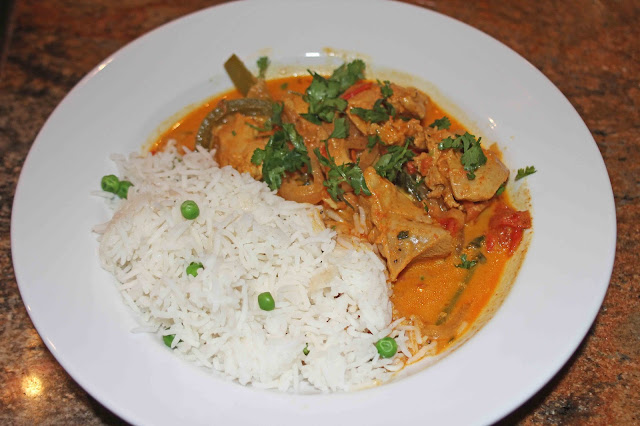 1. Combine the marinade ingredients together in a bowl and mix in the chicken. Cover with plastic wrap and refrigerate from 1 hour to overnight.

2. Combine the masala ingredients together in a small bowl; cover tightly and set aside.

5. Bring the mixture up to a boil and stir in the heavy cream. Continue cooking over medium high until the sauce starts to thicken, 5-10 minutes. Taste and adjust seasonings, as needed. Feel free to add a few drops of red food coloring to the sauce to kick up the color if it's on the light-colored side - whatever floats your boat.

6. Serve with plain Basmati rice or with the recipe below for Cumin, Mustard Seed & Green Pea Basmati rice.  Garnish with chopped fresh cilantro.

1. Rinse the rice well, 2-3 times in a sieve or colander and let drain.

2. Saute the ginger, garlic and onion in 3 tbsp. oil 1-2 minutes. Add the mustard and cumin seed and sauté briefly to release the flavors. Add the drained rice and toss briefly until all the rice grains are coated with the spice-oil mixture. Stir in the peas, then add 3 cups of water. Bring to a boil, reduce to simmer, cover, and cook 15-20 minutes until the all the liquid has been absorbed (do not ever remove the cover during the cooking time). Trust me on that...stay away from the pot. Alternatively, you can also pour the rice & pea mixture into a rice cooker, add the water, and then let the cooker do its magic thing. 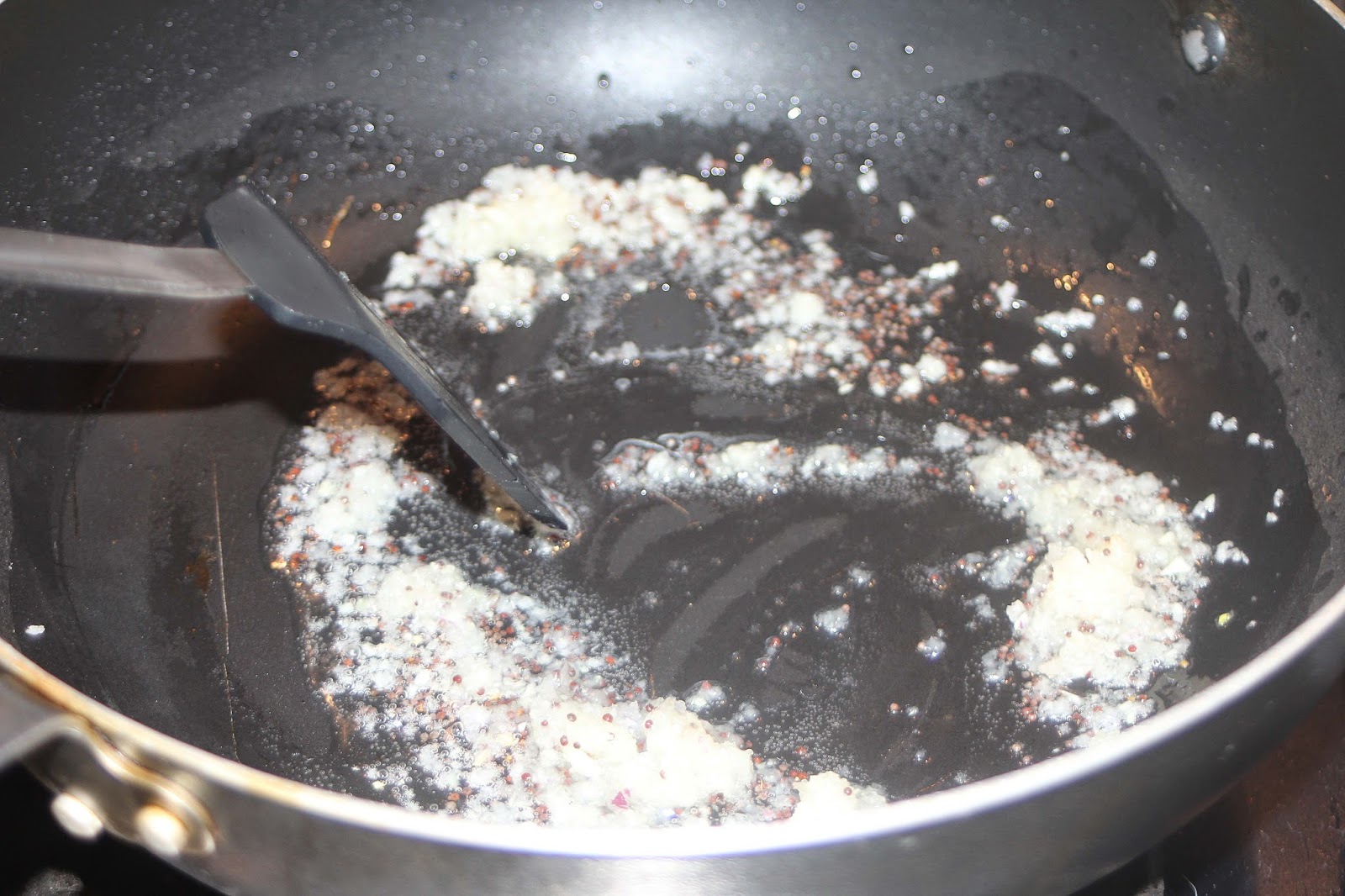 For the rice: saute the ginger, garlic and onion in veggie oil, then add the mustard and cumin seed.  Add the drained rice and sauté briefly to coat all the grains with the spiced oil. Stir in the peas. 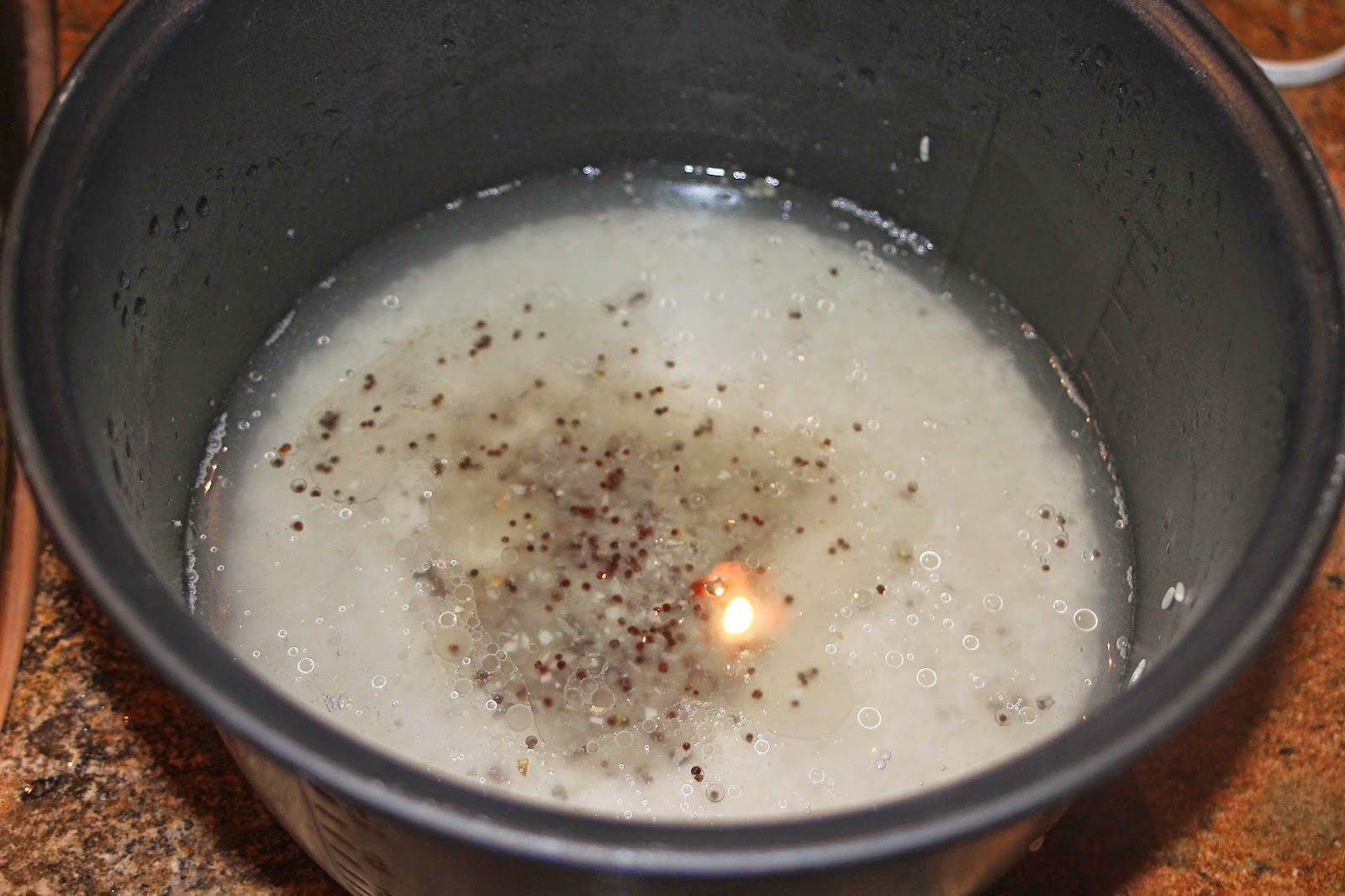 You can cook the rice over the stove top or in the rice cooker. Be sure to vent the rice and remove it from the heat when it's done to prevent overcooking. 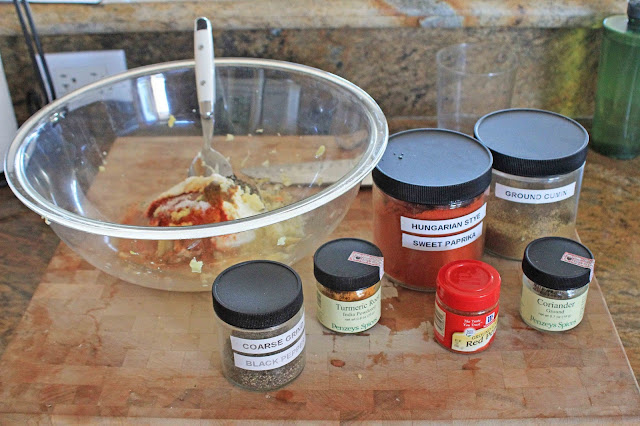 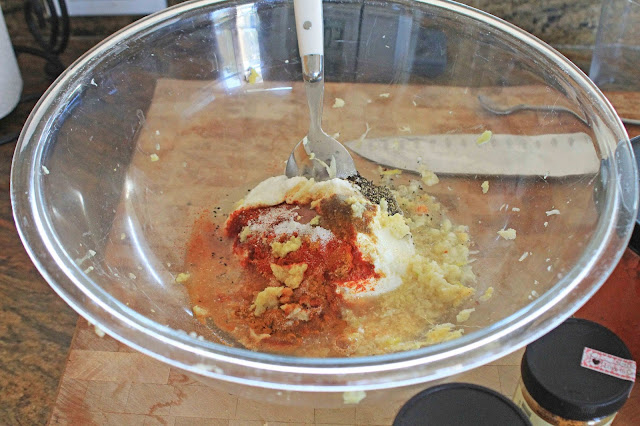 Combine the marinade ingredients together in a bowl and stir until blended. 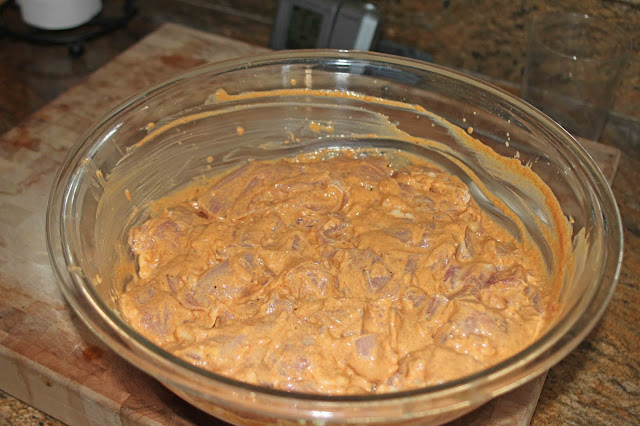 Marinate the chicken anywhere from 1 hour to overnight in the frig. 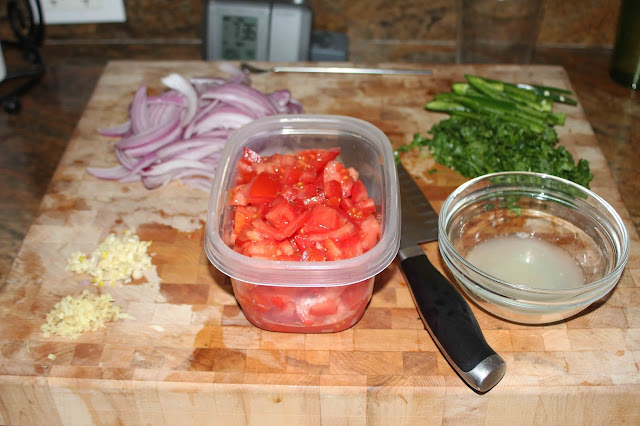 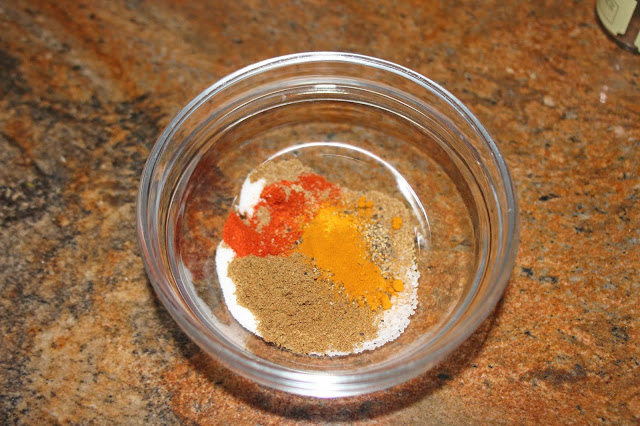 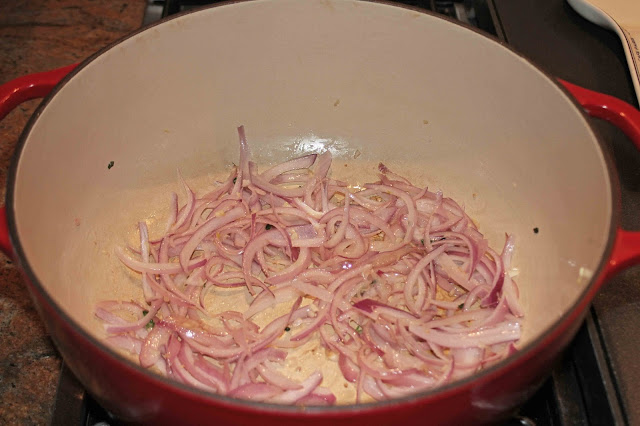 Saute the onion, ginger and garlic in vegetable oil until slightly wilted. 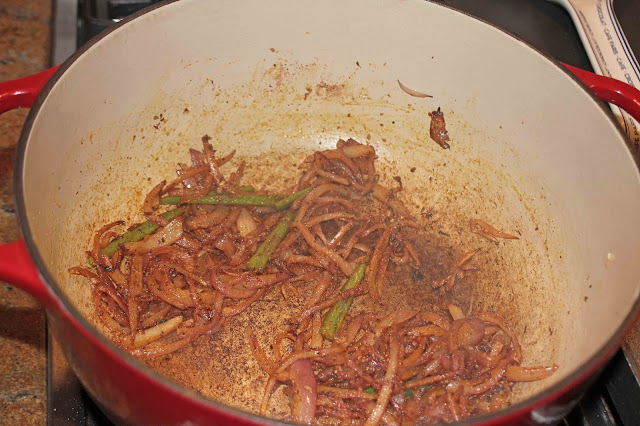 Add the jalapeño, bell pepper and masala mixture and saute for 1-2 minutes until fragrant. 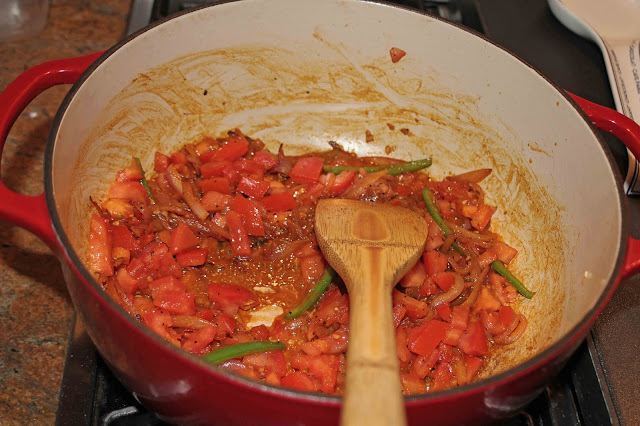 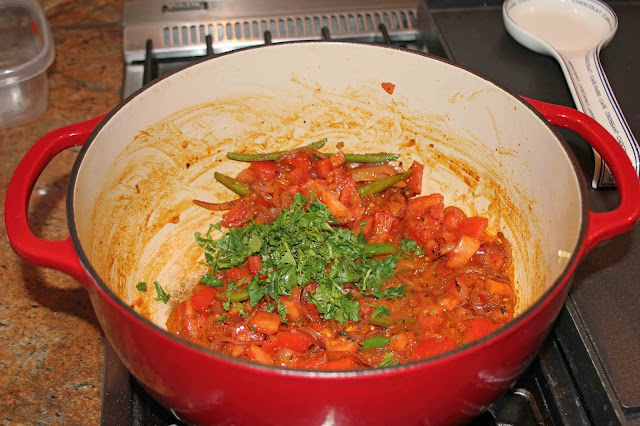 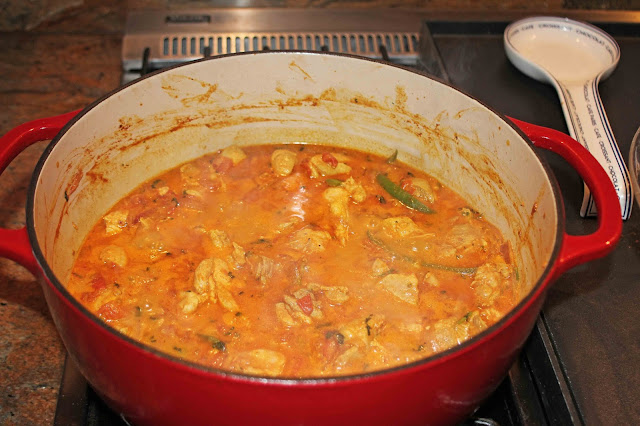 Add the chicken and cook about 2 minutes; add the water, bring to a boil and simmer until the chicken is cooked through. 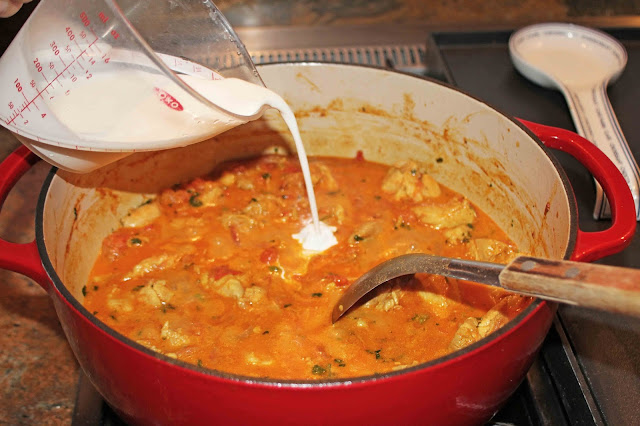 Bring the mixture to a boil then stir in the heavy cream. 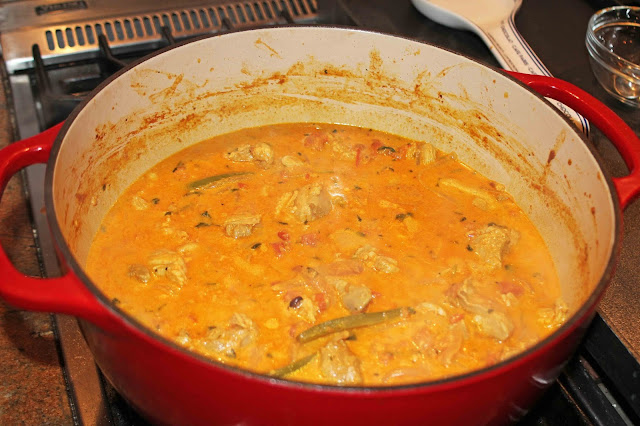 Once the cream has been added, simmer an additional 5-10 minutes or until the sauce has thickened. If the sauce is too light in color, feel free to add a drop or two of red food coloring. Stir in or garnish with cilantro just before serving. 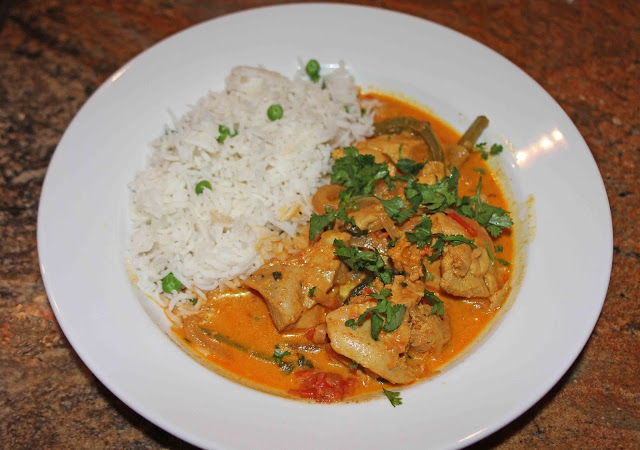 Serve with basmati rice (plain or the recipe above for basmati with
cumin, mustard seed, and green pea)

Posted by camissonia at 8:53 PM