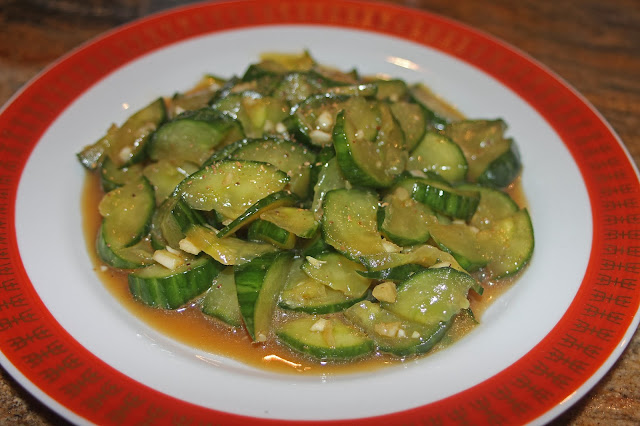 I adapted this recipe from Fuchsia Dunlop's Every Grain of Rice: Simple Chinese Home Cooking and Mrs. Chiang's Szechwan Cookbook. It's a classic cold dish/appetizer which consists of sliced fresh cucumbers, minced garlic, chili oil, vinegar, sesame oil, sugar and soy sauce, but with the addition of ground Szechuan peppercorns, which make the flavors distinctively 'Szechuanese.' The peppercorns are uniquely 'spicy' with a numbing rather than chile-hot quality to them. The secret to helping the cucumbers absorb the flavors of the sauce is to smack the cucumbers with the flat blade of a cleaver or roll them lightly with a rolling pin before slicing.

1. Place the cucumbers on a chopping board and smack with the flat side of a cleaver blade or roll with a rolling pin until the cucumbers have split slightly. Don't overdo it!

2. Slice the cucumbers in half lengthwise, then cut them along the bias/diagonal into thin slices.

3. Place the cucumber slices into a shallow dish or casserole and sprinkle with 1 tsp. salt. Let sit 20-30 minutes to draw out as much liquid as possible. Squeeze slices dry with your hands and blot well with paper towels.

4. Add the remaining ingredients into a small bowl and stir to combine. Pour over the cucumber slices and toss well. It is ok to serve immediately, but I like to place the cucumbers into a Ziploc bag, squeezing as much air out as possible, then place flat on a paper towel and let marinate in the refrigerator for at least one hour, turning the bag a couple times, to let the flavors develop.

5. Serve cold or at room temperature. 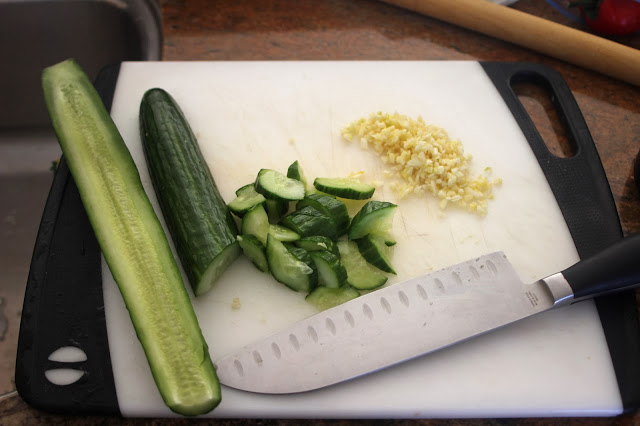 Smack or roll the whole cucumbers, then cut each lengthwise in half, then slice along the bias/diagonal into thin sliced. 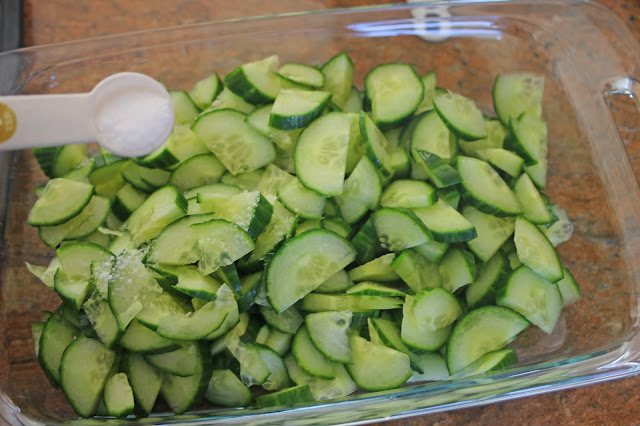 Place cucumbers slices into a shallow dish or casserole and toss with 1 tsp. salt to extract the water. Let sit 20-30 minutes. 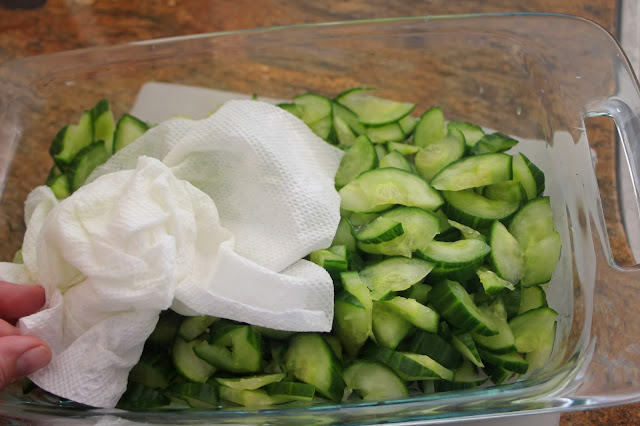 Squeeze the cucumber of excess water, drain, and blot dry with paper towels. 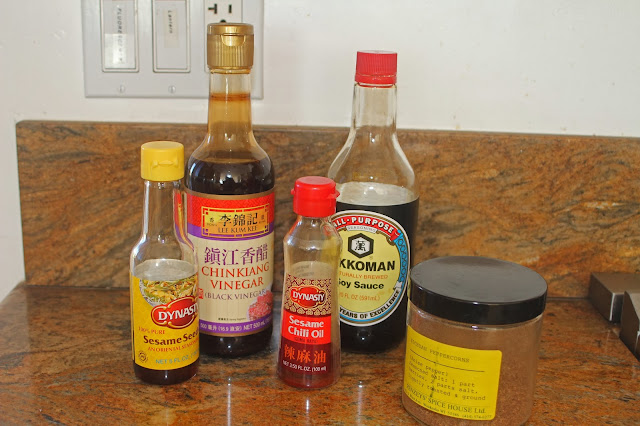 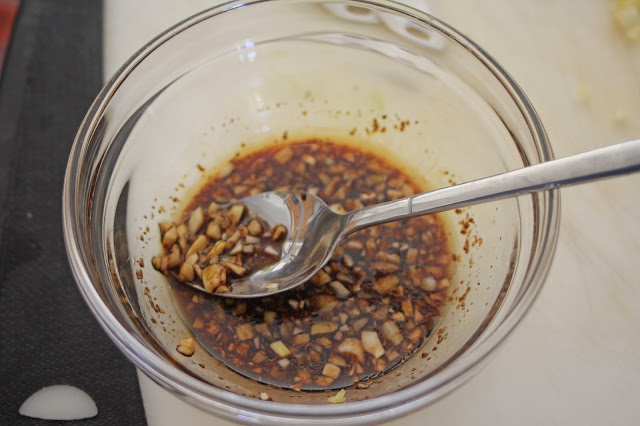 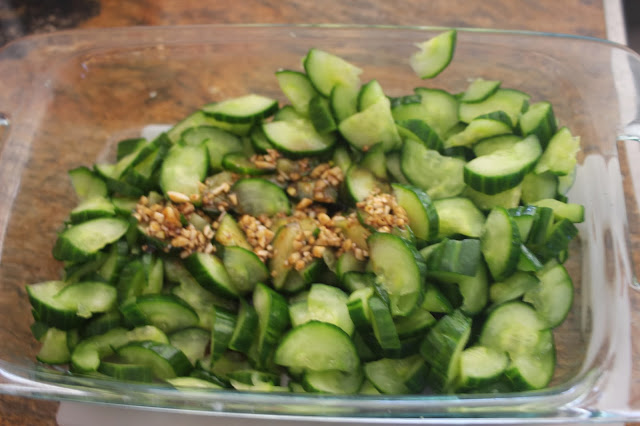 Pour sauce over the cucumbers. You can serve immediately or let marinate in the refrigerator for at least one hour for better flavor. 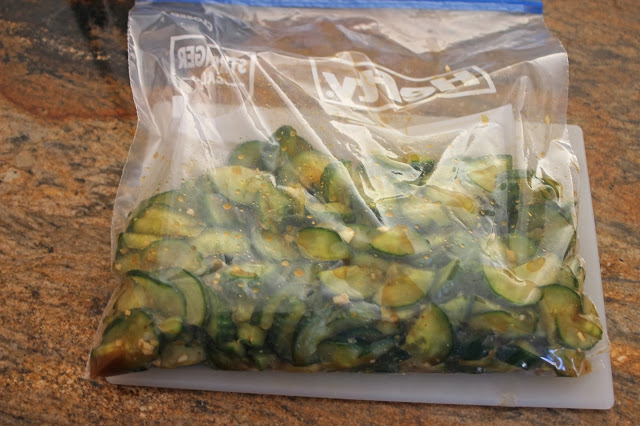 To marinate in the frig., place the cucumbers in a Ziploc bag and squeeze as much air out of the bag. Lay the bag flat on a paper towel in the frig and marinate at least one hour (turning a couple times). 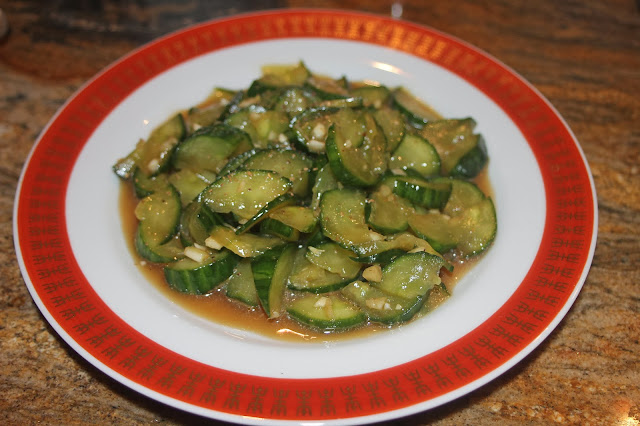 Can be served chilled or at room temperature.
Posted by camissonia (Arleen) at 2:51 PM