Oooh...Water Convolvulus (Ipomoea aquatica) just sounds like something that's so not in the realm of the edible. In fact, it's a member of the Morning Glory family, and I've never envisioned your typical morning glory vine as a potential dish of delicious sauteed greens. In Taiwanese, we call this "Ying Tsai" (my phonetic spelling). The Mandarin version "Kong Hsin Tsai" can be translated as something like "Hollow-stemmed vegetable" or "Empty-hearted vegetable." Go figure.


Anyhoo, here's the low-down from Wiki: http://en.wikipedia.org/wiki/Ipomoea_aquatica
"Ipomoea aquatica is a semi-aquatic tropical plant grown as a leaf vegetable. It is known in English as Water Spinach, Water Morning Glory, Water Convolvulus, or by the more ambiguous names "Chinese spinach" and "swamp cabbage". It has many other names in other languages. It is found throughout the tropical and subtropical regions of the world; it is not known exactly where it originated. [although some sources say it originated from Taiwan and S. China]. Ipomoea aquatica grows in water or on moist soil. Its stems are 2–3 metres (7–10 ft) or more long, rooting at the nodes, and they are hollow and can float. The leaves vary from typically sagittate (arrow-head-shaped) to lanceolate, 5–15 centimetres (2–6 in) long and 2–8 centimetres (0.8–3 in) broad. The flowers are trumpet-shaped, 3–5 centimetres (1–2 in) diameter, usually white in colour with a mauve centre. The flowers can form seed pods which can be used for planting.Ipomoea aquatica is most commonly grown in East and Southeast Asia. Because it flourishes naturally in waterways and requires little if any care, it is used extensively in Malay and Chinese cuisine, especially in rural or kampung(village) areas. It has also been introduced to the United States where its high growth rate has caused it to become an environmental problem, especially in Florida and Texas. It has been officially designated by the USDA as a "noxious weed"[2] (the term "noxious" refers to its effect on the environment, not to any toxicity). In Chinese cuisine (Chinese: 空心菜; literally "hollow vegetable") there ways numerous ways of preparation, but a simple and quick stir-fry either plain or with minced garlic is probably the most common. In Cantonese, the water spinach is known as 蕹菜 (Jyutping: ung3 coi3, sometimes transliterated as ong choy). In Cantonese cuisine, a popular variation adds fermented bean curd. In Hakka cuisine, yellow bean paste is added, sometimes along with fried shallots. The vegetable is also extremely popular in Taiwan, where it grows well." 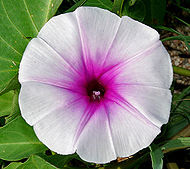 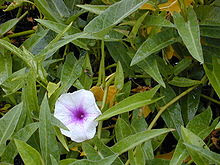 The horror that this delectable green should now be considered a noxious weed in some southerly parts of the U.S.! It's all about containment, man. Nevertheless, I'm glad that it's readily available here in our local SoCal Chinese markets. Since it's not listed in the California Invasive Plant Inventory Database, I guess I can relish this veggie without a gnawing, lingering guilt trip.


Back in the day, my mom would typically saute these greens in just some vegetable oil and a bunch of chopped garlic. So here's my rendition of her version. And in case you're wondering, it tastes kinda like spinach and also cooks down to a fraction of its original volume like spinach.
Ingredients:
1 bunch of Water Convolvulus, cleaned & trimmed (probably 2+ lbs.)
8 cloves garlic, minced
2 tbsp. vegetable oil
1 cup water mixed with 1 1/2 tbsp. granulated chicken base (Totole brand is my fav)
1 tsp. salt
1 tsp. sesame oil
1. Heat oil in a wok or large saute pan and add minced garlic; stir and cook about 1 minute.
2. Add water convolvulus to the pan in batches (this green will cook down to nothing in no time, like spinach), stir-frying well after each addition.
3. Add chicken broth (1 cup of water + 1 1/2 tbsp. of granulated chicken base). Bring to a boil, and then turn off heat. Toss in salt & 1 tsp. of sesame oil just before serving. One large bunch of water convolvulus. 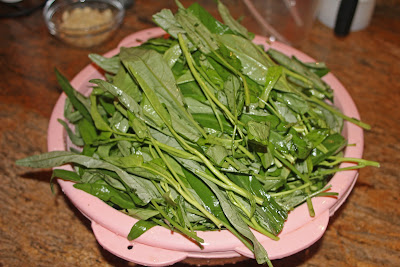 Trim the greens, keeping only the leaves and tender parts of the stem. Discard the thicker stem ends. 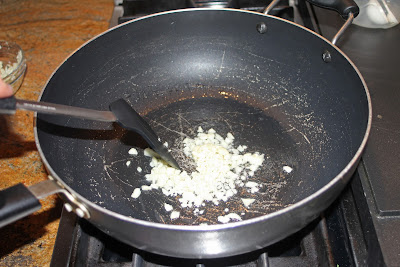 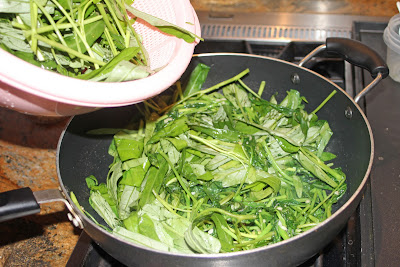 Saute the water convolvulus in batches (add more as the greens cook down). 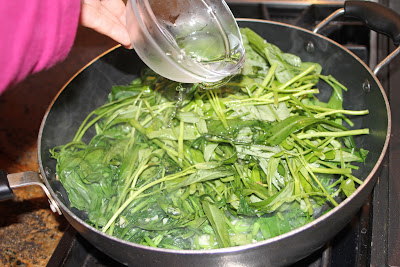 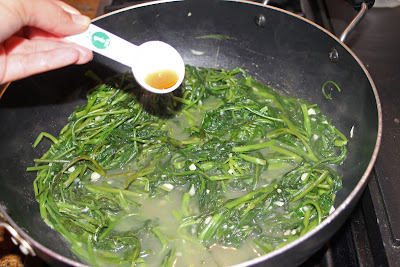 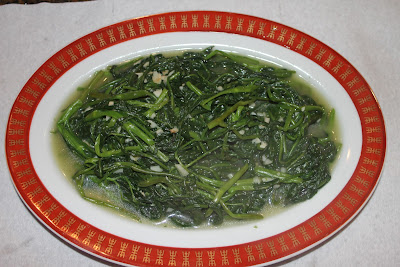 Now all you need is some steamed white rice.
Posted by camissonia at 11:18 PM