So what is Sa Cha sauce? It's like a Taiwanese/Southern Chinese version of the peanut-based Satay sauce of SE Asia, but minus the peanuts and plus some distinctive signature ingredients that sets it apart from all other Asian sauces. This is the staple dipping sauce we've always used at home for traditional Taiwanese hot pot. For hot pot, my mom always mixed in a bit of soy sauce and ketchup into the Sa Cha sauce, and Elaine always liked to stir in a whole raw egg in her portion (not my cup of tea, but raw egg is a common addition). This mildly spicy sauce usually includes garlic, sesame, shallots, chili powder, dried shrimp, brill fish, salt, and soy bean oil. My favorite brand is "Bull Head" (labeled as Bull Head BBQ Sauce). Sa Cha sauce is also a great seasoning for stir-fried beef and noodles. In this preparation, I incorporated it into a quick and easy stir-fry dish of sliced pre-cooked squid with scallions, garlic, ginger and jalapeños. Great served with steamed white rice. 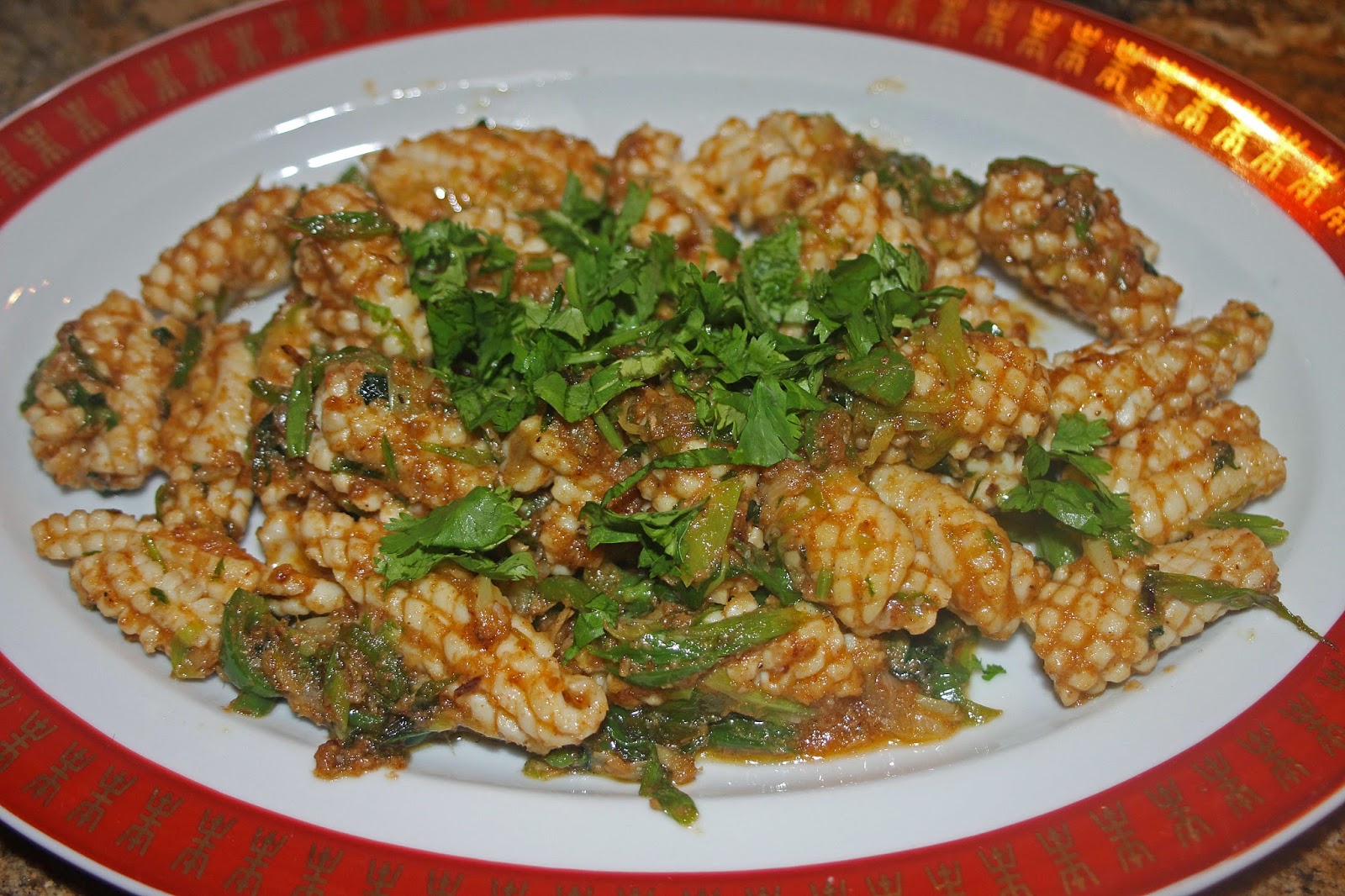 1. Frozen squid is readily available in most Asian markets. But, if you can't find it, by all means buy fresh: just clean and trim the squid, cut into 1" x 2" pieces, score the surface lightly with a sharp knife into a cross-hatch pattern, blanch briefly (10-15 seconds) in boiling hot water, drain, and set aside.

2. Pat the squid pieces dry with paper towels and place in a bowl. Combine with the rice wine.

3. Heat 1 tbsp. vegetable oil in a sauté pan or wok. When hot, add scallions, ginger, and jalapeños. Stir fry for 15-20 seconds until fragrant. Add the squid and toss briefly until combined.

4. Stir in the Sa Cha sauce. Saute for 20-30 seconds until the squid is heated through and thoroughly combined with the sauce.

5. Remove to a serving platter and garnish with chopped cilantro. 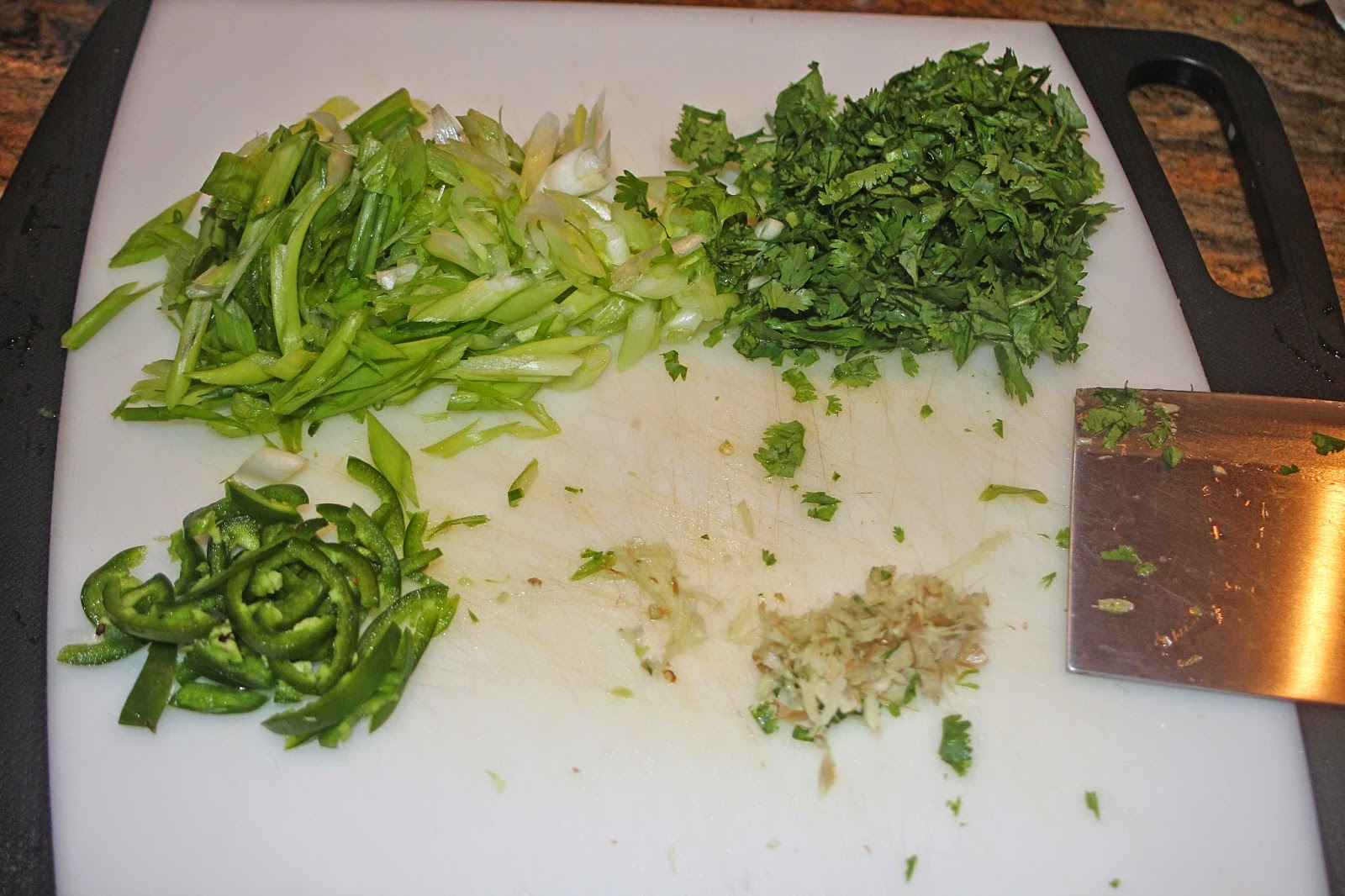 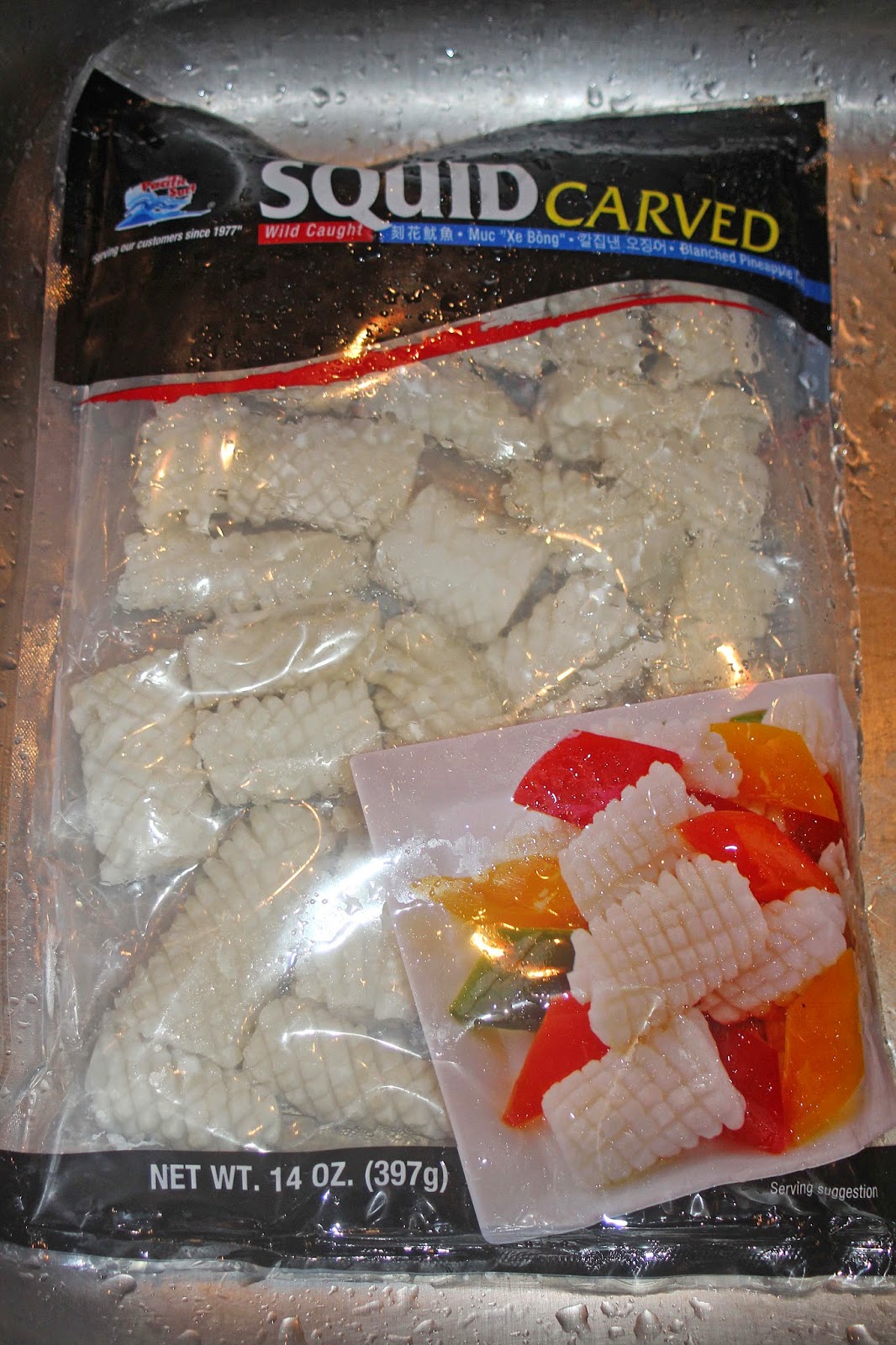 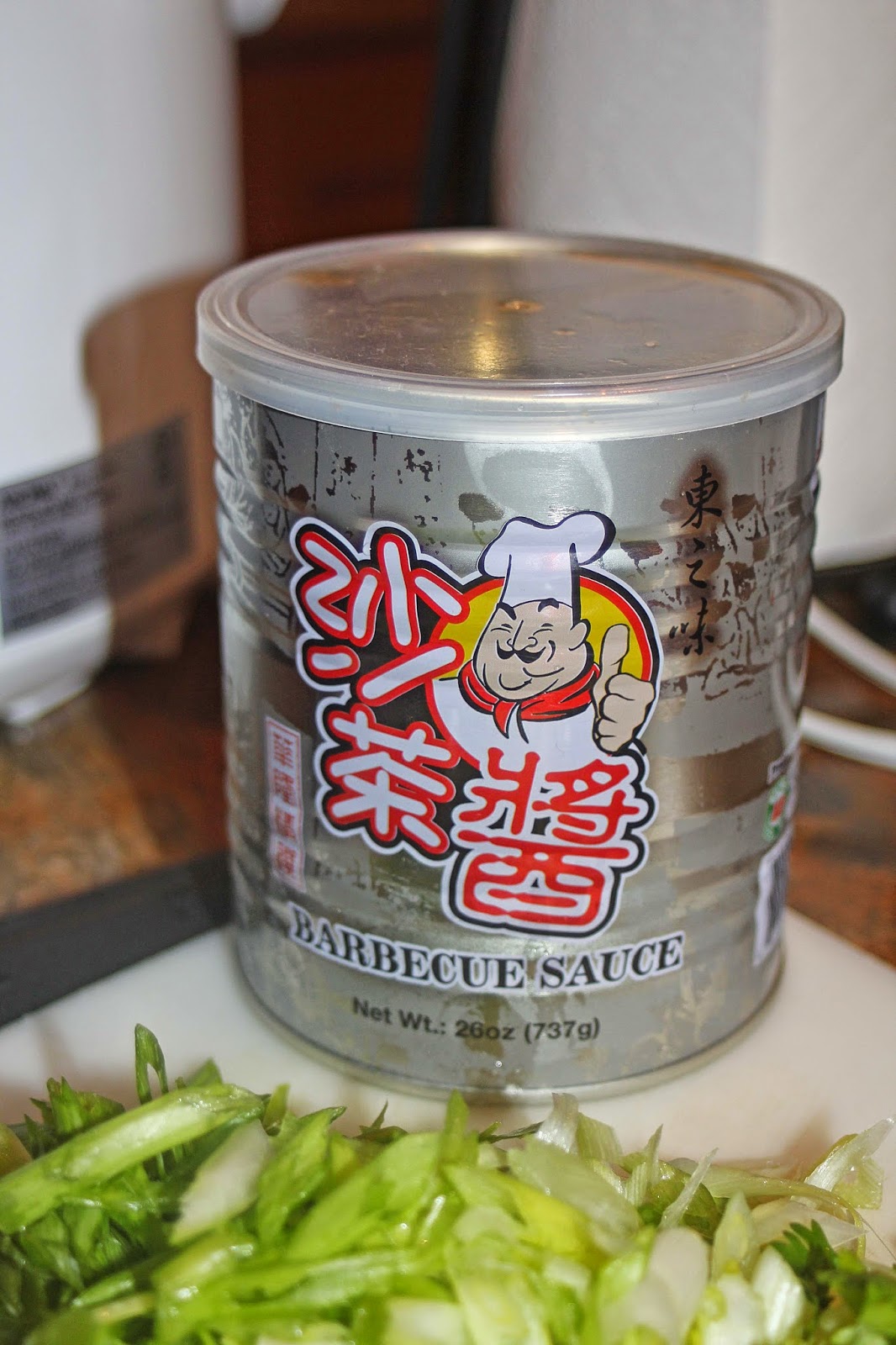 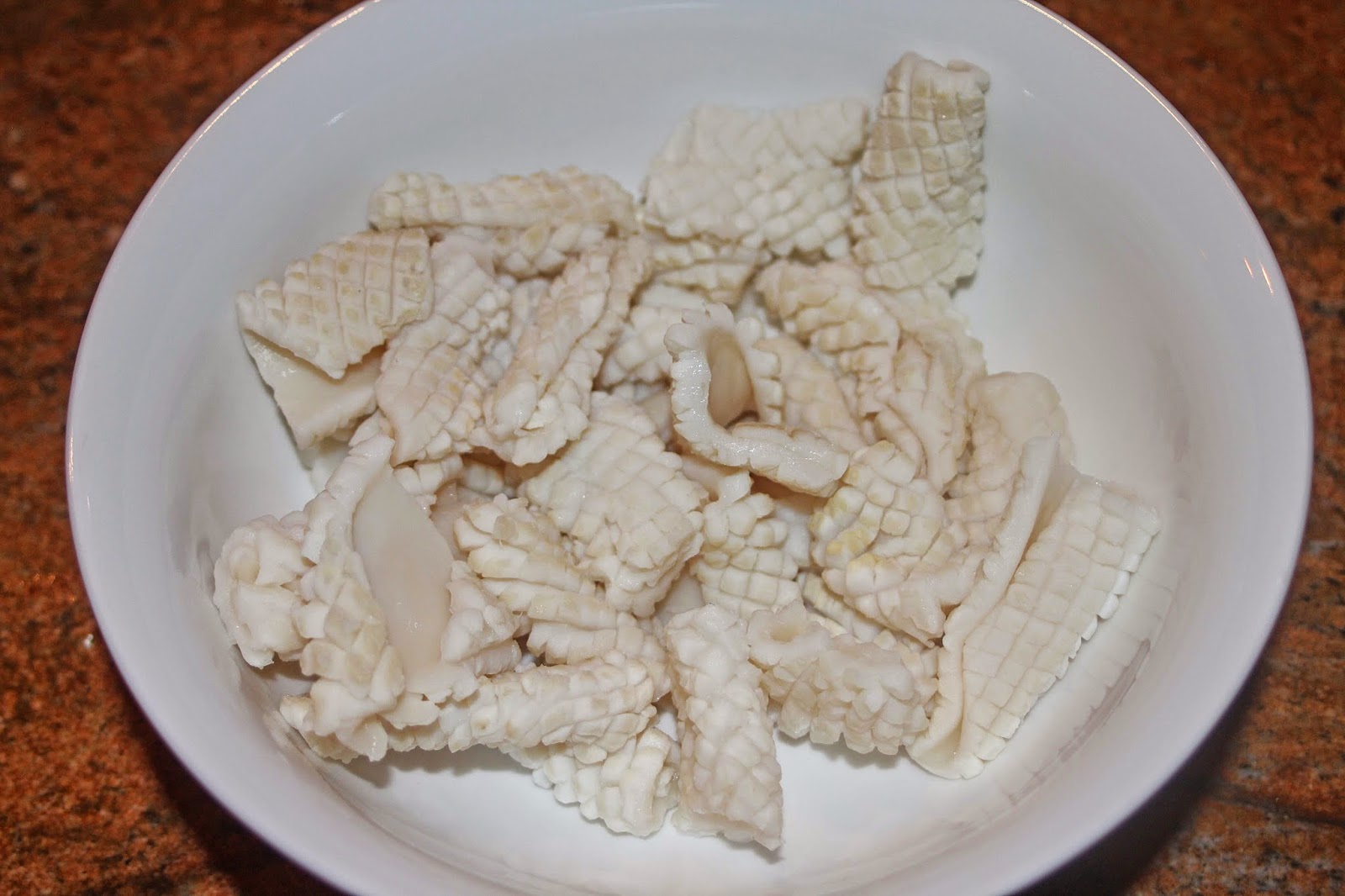 Add rice wine to the squid and let marinate briefly before cooking. 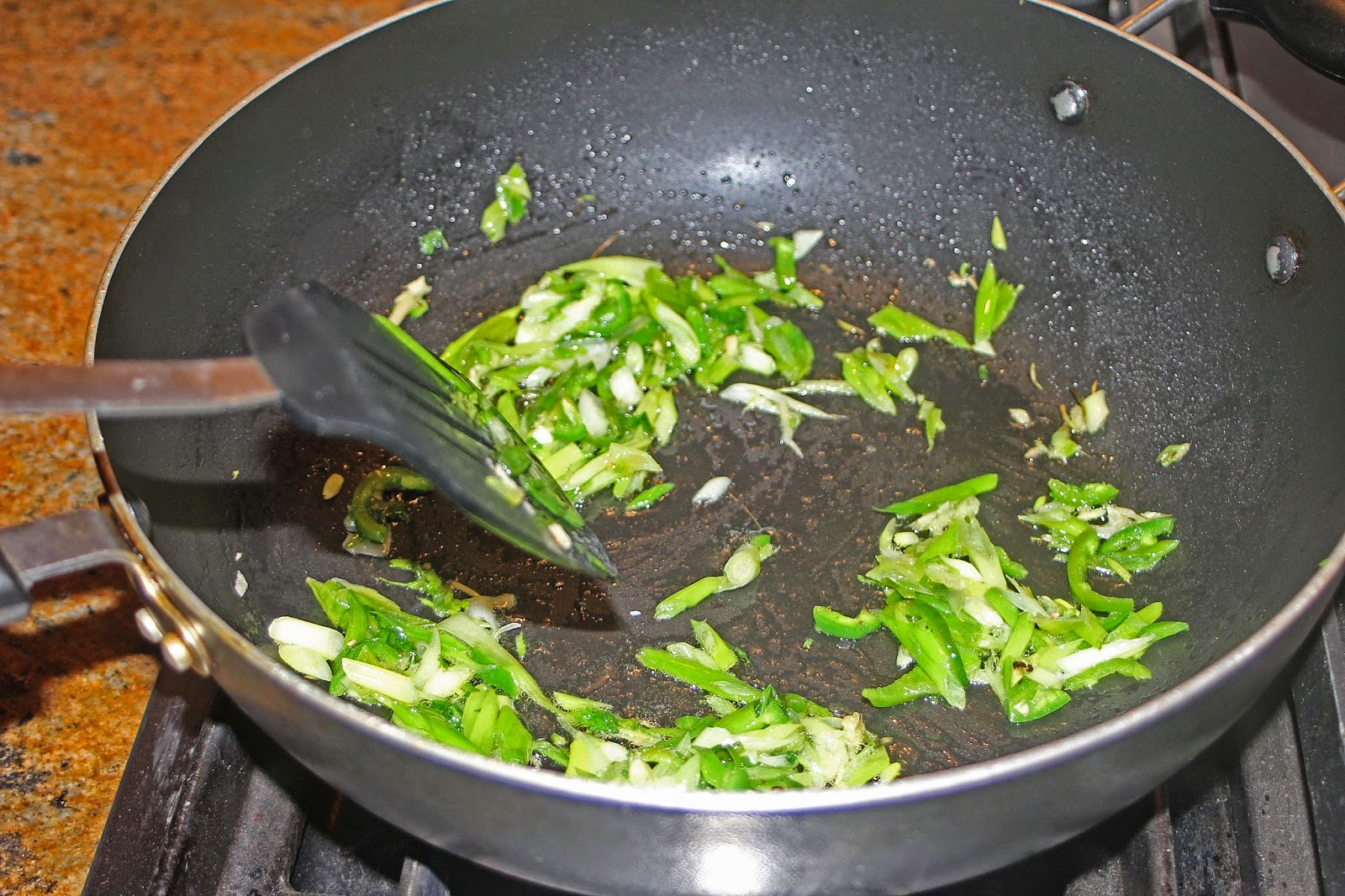 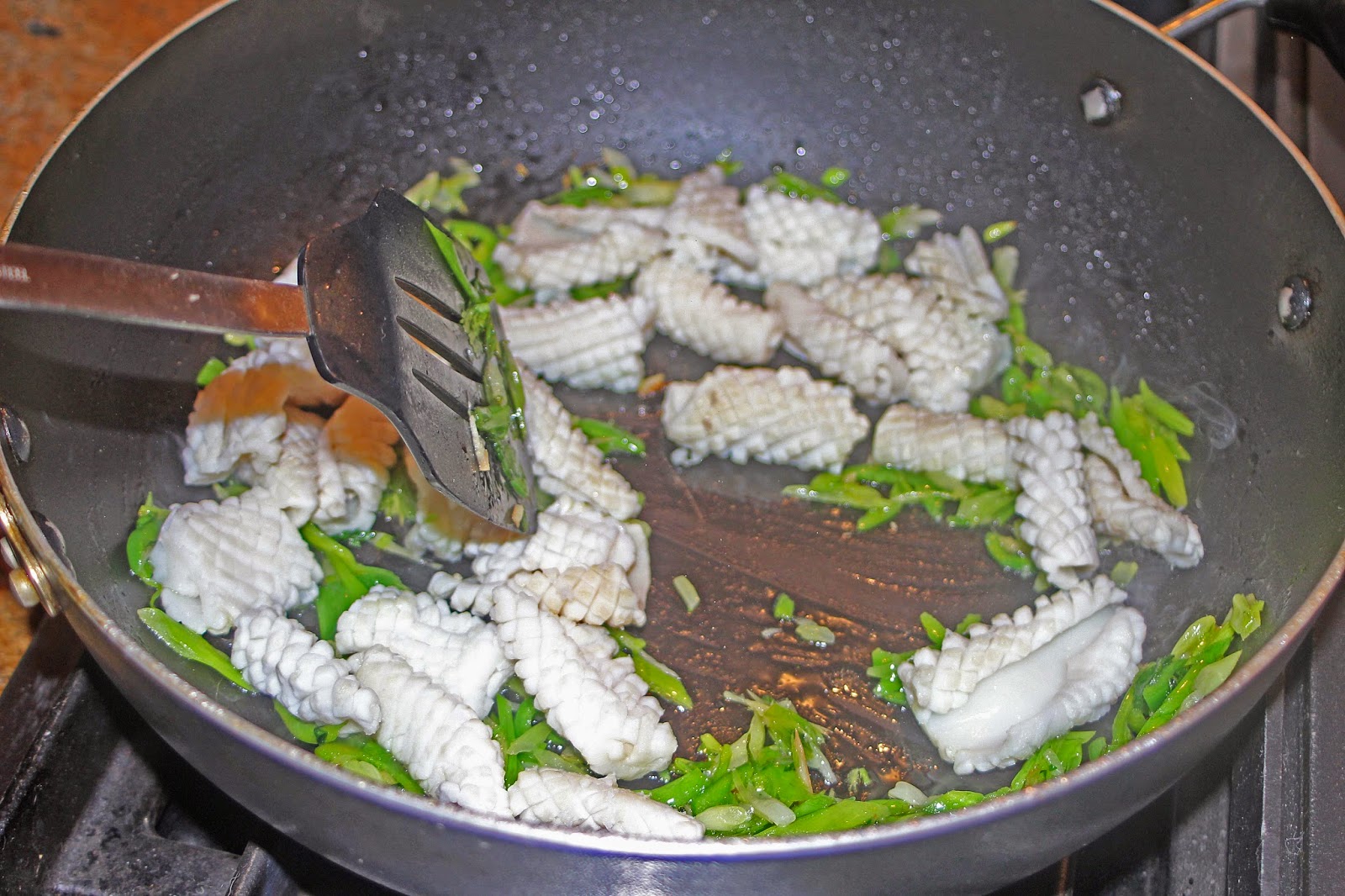 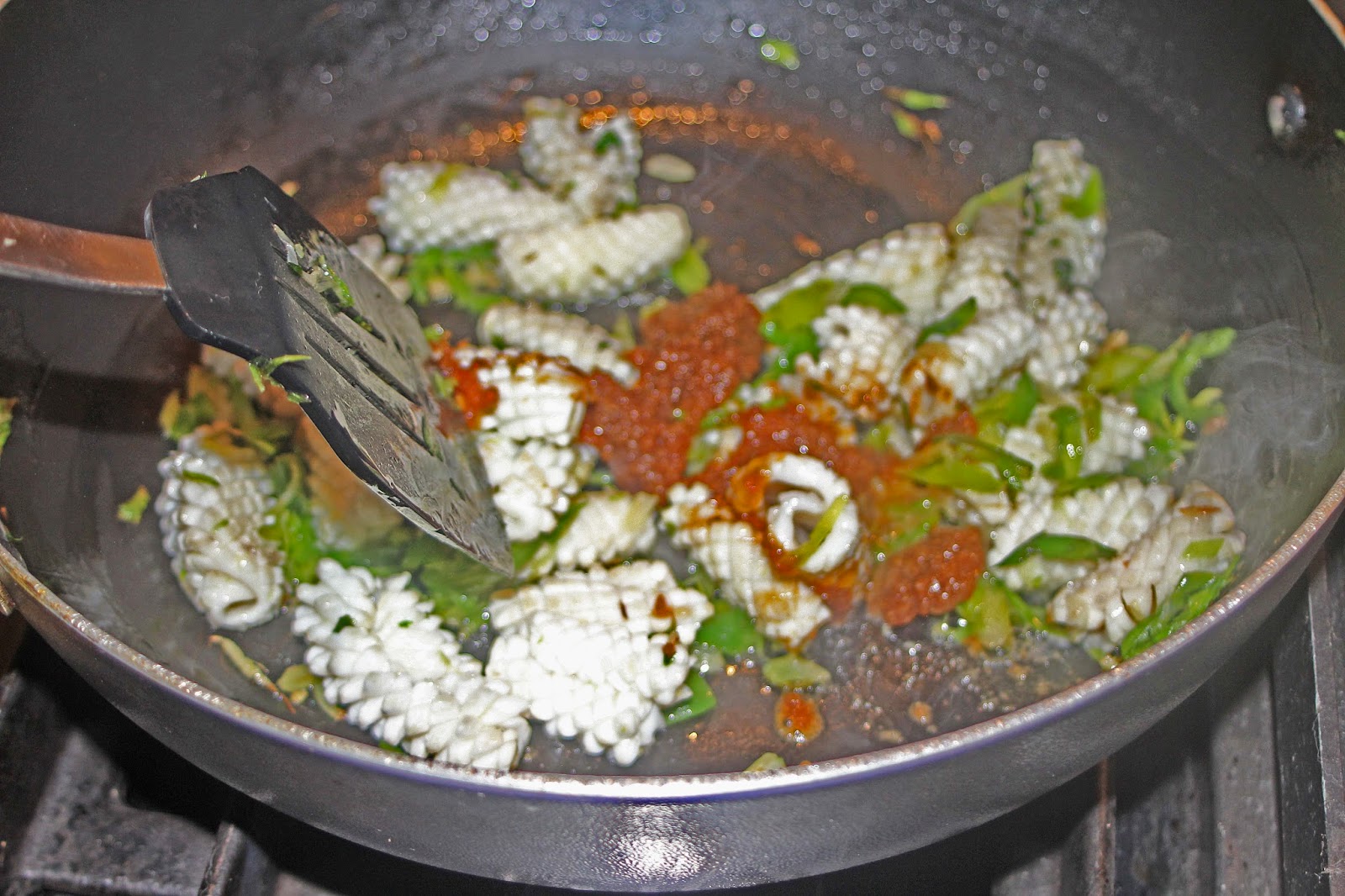 Stir in the Sa Cha Sauce. 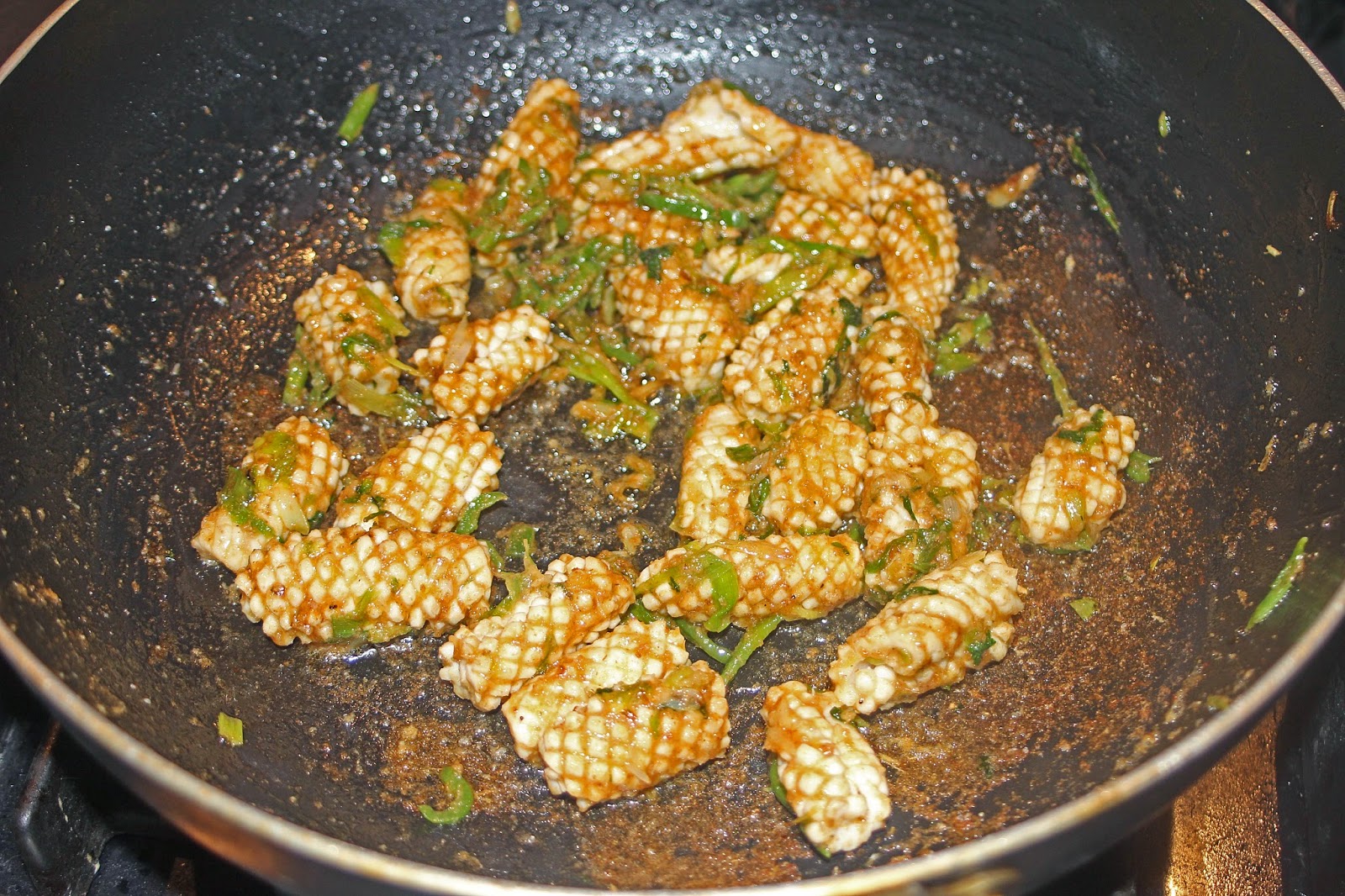 Saute for 20-30 seconds or until the squid is warmed through and thoroughly combined with the Sa Cha sauce. 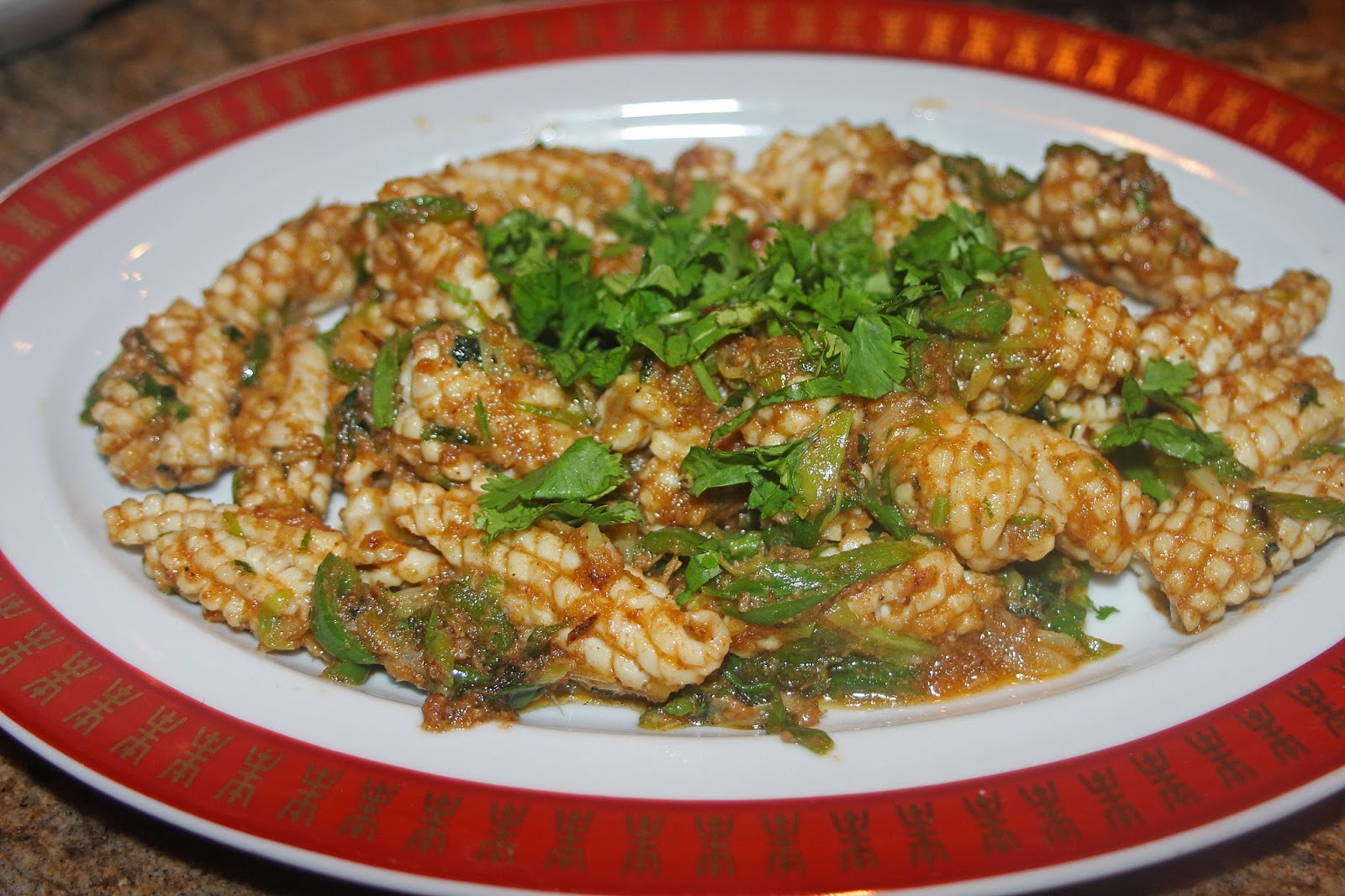 Garnish with chopped cilantro and serve with steamed white rice.