For our Memorial Day weekend Tapas fest, Elaine cooked her version of the Spanish Tortilla, which is essentially a potato omelette. In her rendition there's also some lightly caramelized onion & garlic, all cooked in olive oil. EE's methodology, which is not exactly traditional, involves slow cooking the onions and garlic first, then slow-cooking the sliced potatoes in a separate batch until tender, and then letting the veggie mixture cool before adding the beaten eggs to both. The end result was absolutely delicious and sure brought back memories of our summer of '82 in Spain when we were part of a group of about fifteen students there from our high school Spanish language program at Taipei American School. I remember my Spanish "mom" would cook tortillas about twice a week for dinner and then pack the leftovers into a ginormous loaf of rustic bread (aka, 'bocadillo') for lunch the next day. Truly the quintessential carb lover's wet dream sandwich.


Before we went to Spain, I had always pegged tortillas as round Mexican flatbreads made from corn or wheat flour, so I was totally taken aback when presented with my first 'Spanish' tortilla. Nothing emotes tacos, quesadillas or burritos like a hearty breakfast-like potato omelette, eh? Just sayin'...


And above and beyond tortilla ignorance, I, at the ripe old & cocky age of 16, sure had a lot more to learn about this foreign land that was neither Mexico nor the republic of South America. I also had to grudgingly concede that some of the locals didn't really have a speech impediment. What was up with their pronunciations of "c" and "z" anyways? Try saying 'athuthena' instead of 'azucena' or 'el thielo es athul' instead of 'el cielo es azul.' SHEESH- that's a tongue twister even for Elmer Fudd! Needless to say, our profesor at the Colegio was not amused  and probably thought I was an imbecile, or at the very least, supremely naive.


1. Heat 2 tbsp. of olive oil in a large skillet over medium heat and add diced onions & minced garlic. Season with a pinch of salt & pepper. Cook about 15-20 minutes until onion is very soft and even lightly caramelized. Remove to a bowl or platter and set aside.


2. Add 1/4 cup of olive oil to the same skillet and heat over medium heat. Add sliced potatoes and season with 2 tsp. of salt & 1/4 tsp. black pepper. Turn heat down to low, cover, and cook until potatoes are just tender (total cooking time will be about 30 minutes - check and stir potatoes every 5 minutes).


3. Once potatoes are cooked through, remove from heat and combine with the cooked onions & garlic. Set aside and let cool.


4. In a large bowl, whisk together 12 eggs and a pinch of salt. Pour the cooled onion-potato mixture into the bowl with the beaten eggs.


5. Heat 2 tbsp. of olive oil over high heat in the same skillet. Pour in egg mixture then turn the heat down to medium low. Occasionally lift the edges of the tortilla with a spatula to see if egg is setting. Once the tortilla is about 3/4 set (approx. 10-15 minutes), cover the top of the pan with a large platter and flip the tortilla onto it.


6. Reheat skillet over medium heat with another 2 tbsp. of olive oil. Slide tortilla back into the skillet to finish cooking the other side (approx. 5-7 minutes).


7. Plate tortilla and serve sliced either hot or at room temperature. Remember, there's always that bocadillo for lunch tomorrow! 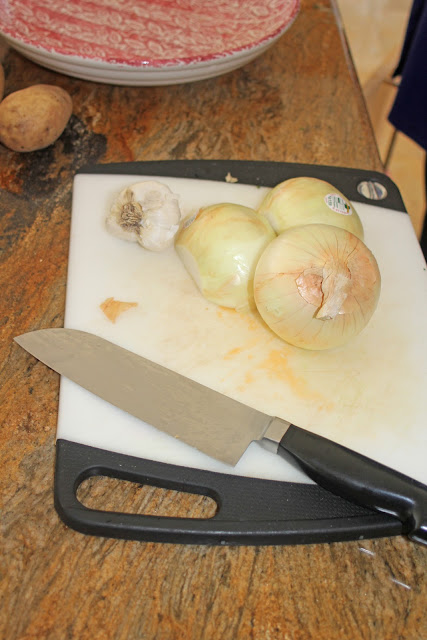 Dice a couple onions and mince 2 cloves of garlic. 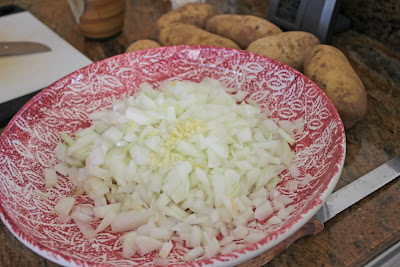 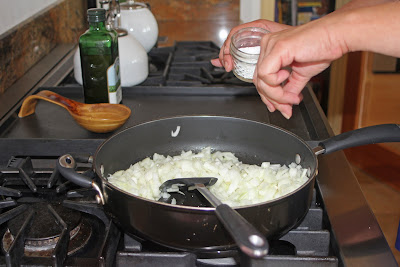 Saute onion and garlic in 2 tbsp. of olive oil over medium. Season with a pinch of salt. 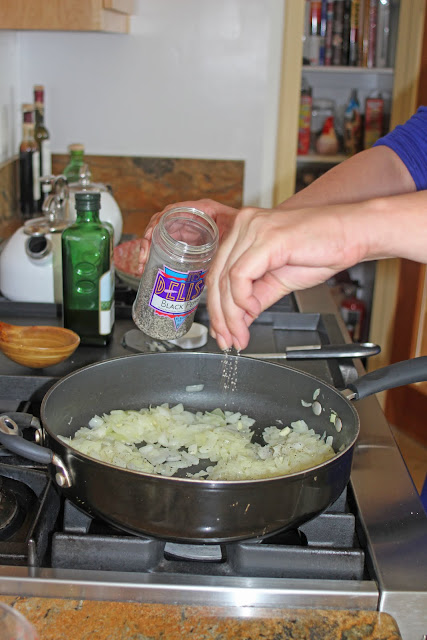 Then season with a pinch of pepper. 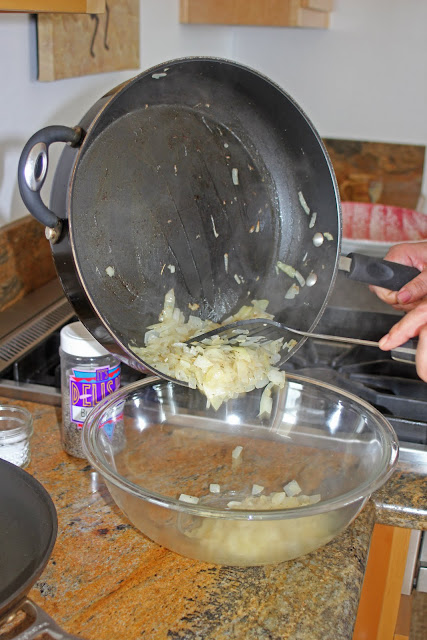 Once onion mixture is lightly caramelized (after 15-20 min.), remove to a bowl and set aside. 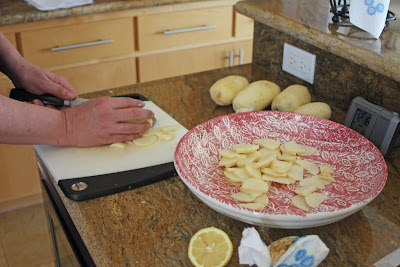 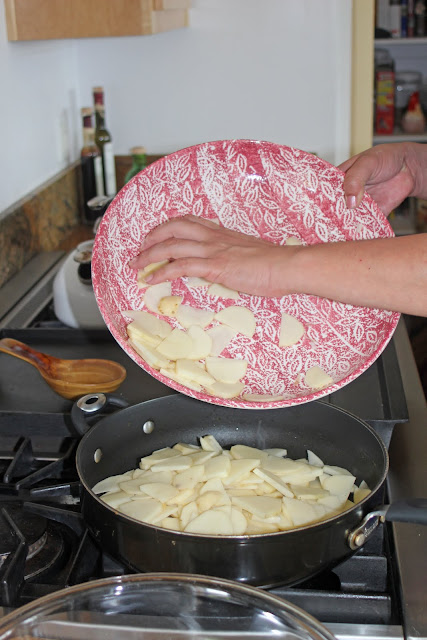 Heat 1/4 cup of olive oil in the same skillet over medium heat and add potatoes. Season with 2 tsp. of salt and 1/4 tsp. of black pepper. 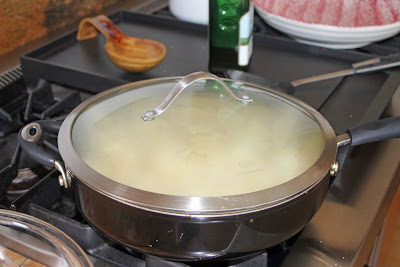 Turn heat down to low, cover and cook about 30 minutes or until potatoes are just tender. In the interim, briefly stir the potatoes every 5 minutes to make sure they don't stick to the bottom of the pan. 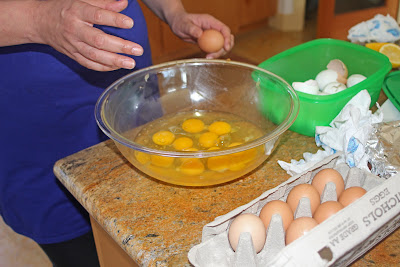 Crack 12 eggs into a large bowl. 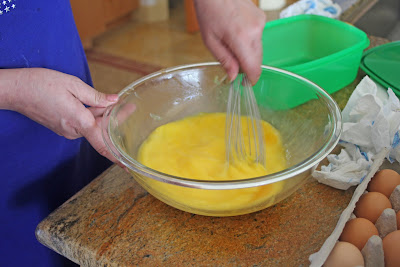 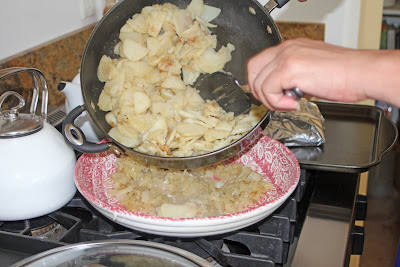 When potatoes are done, combine with cooked onion-garlic mixture. 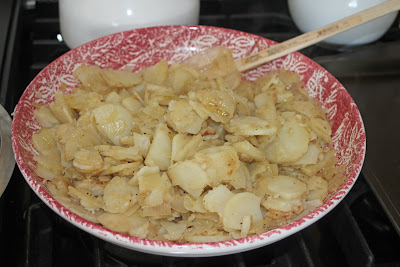 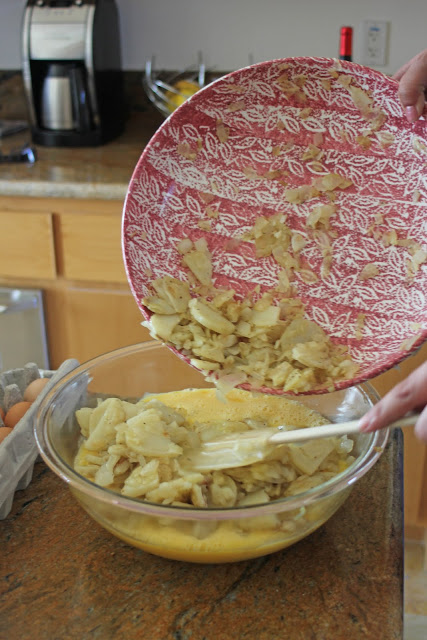 Once the potato-onion mixture has cooled somewhat, add to the bowl of beaten eggs. 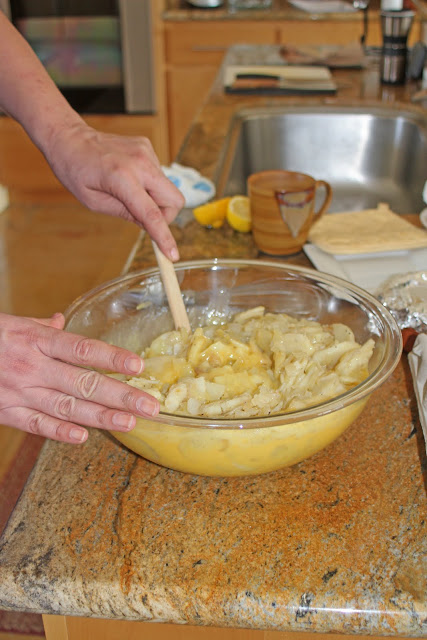 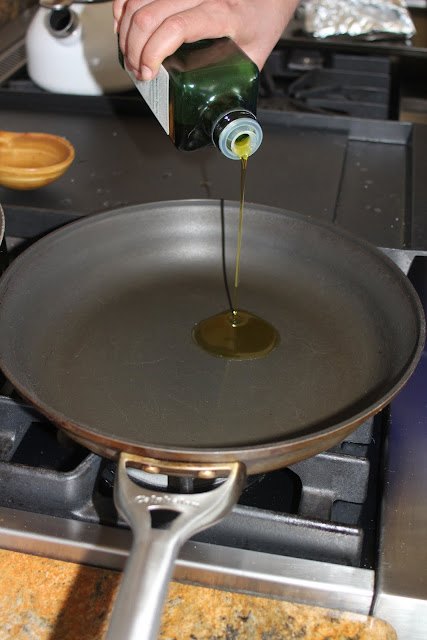 Heat 2 tbsp. of olive oil over high heat in skillet. 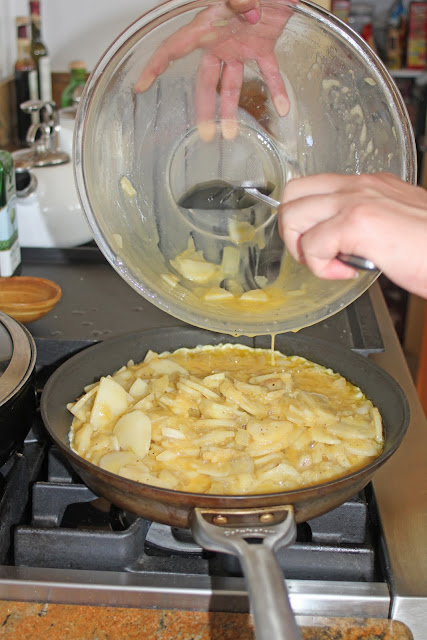 Add egg-potato mixture to the pan. 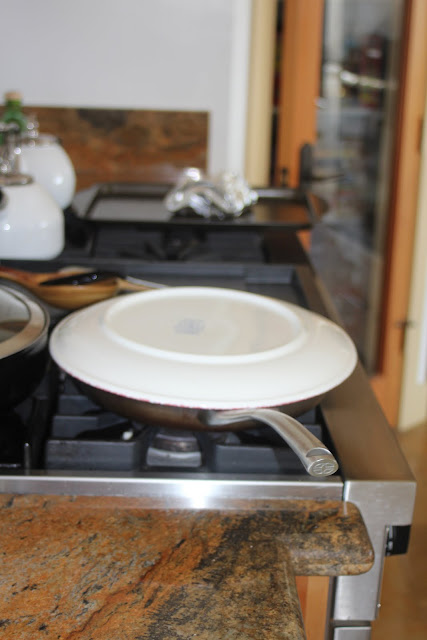 When tortilla is about 3/4 set (10-15 minutes), place large plate/platter over the top of the pan. 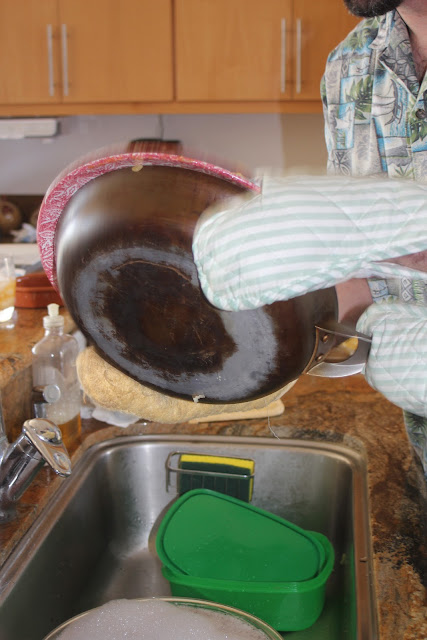 Then get a chivalrous (aka, I'll suck it up and do whatever she asks me to so I can RIP) dude - in this case, Elaine's man Dan - to do the requisite tortilla flipping. 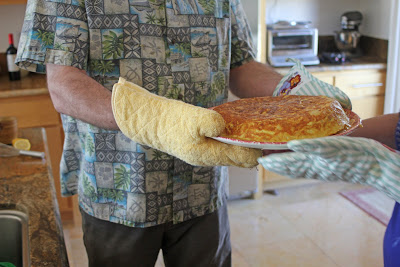 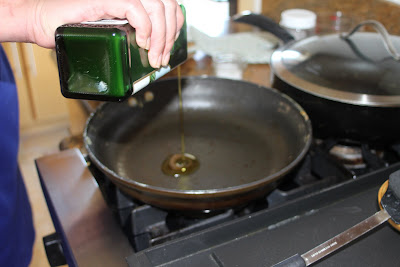 Add another 2 tbsp. of olive oil to the pan over medium heat. 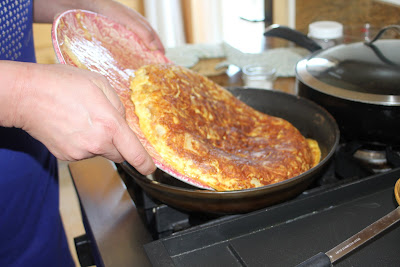 Slide the flip side of that tortilla back into the pan. 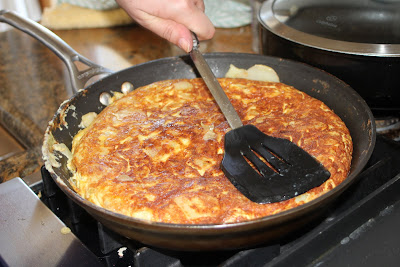 Cook over medium heat another 5-7 minutes until cooked through. 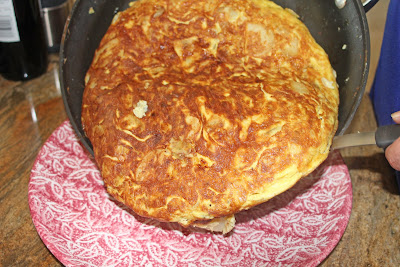 Remove tortilla to a serving platter. 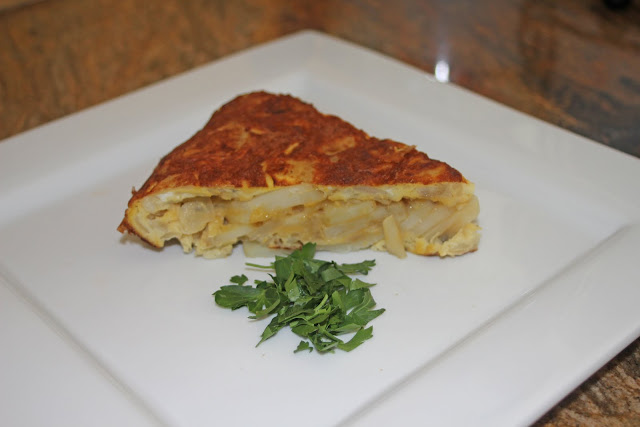 Great flavors, and even better the next day!
Posted by camissonia at 9:54 PM