I adapted this recipe from The America's Test Kitchen Cookbook. I've made other versions of fsh & chips before, but this is my fav. The batter is perfectly seasoned and fries up light and crispy. I omitted the second dredging of the fish in the seasoned flour so that the batter wouldn't become too clumpy or thick, and served it with my own homemade lime & cilantro tartar sauce. Leftovers are easily reheated in the oven or toaster oven (10 minutes at 3ooF will crisp these guys right up). 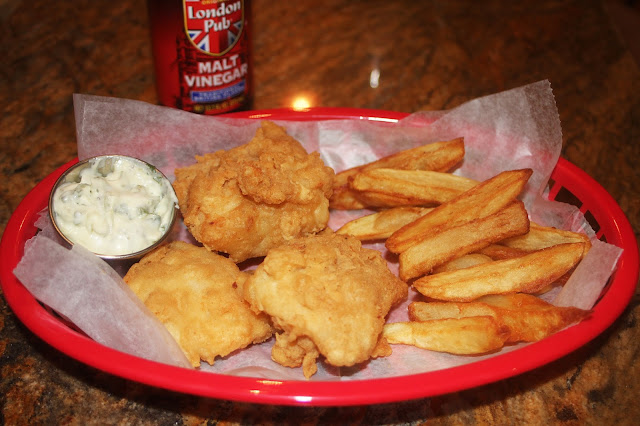 1 tsp. baking powder
10 oz. cold beer (I like to use Newcastle brown ale)

1. Combine all the ingredients for the seasoned flour together in a bowl. Transfer 3/4 cup of the mixture to a baking sheet. Add 1 tsp. baking powder to the remaining flour in the bowl and stir to combine.  Set aside.

2. Peel the potatoes and cut each in half lengthwise. Cut each half in half and then slice into wedges. Place in a bowl and cover with water to keep potatoes from turning brown.

3. Drain the water from the potatoes and blot the wedges dry with paper towels. Toss with 1/4 cup vegetable oil, cover with plastic wrap, and microwave for 6 minutes on high, stirring halfway through with a rubber spatula.

4. Drain potatoes in a strainer and rinse with cold water. Spread on a kitchen towel  and pat dry. Let cool to room temperature (10 minutes to 1 hour).

5. Heat 3 quarts of oil in a large pot or deep skillet over medium high heat to 350F. Add the potatoes and turn heat up to high. Fry 6-8 minutes until lightly golden. Drain the potatoes on paper towels and set aside.

7. In the meantime, add the cold beer to the flour-baking powder mixture in the bowl; stir well with a whisk to combine.

8. Blot the fish filets dry with paper towels. Dredge the fish in the dry flour mixture on the baking sheet, then dredge in the wet beer-flour mixture in the bowl. Drop into the hot 375F oil and fry 7-8 minutes (do this in batches if needed so as not to overcrowd pan) or until golden brown. Drain on paper towels.

9. When all the fish is fried, bring oil back up to 375F. Add the fries and cook a second time for 3-5 minutes until crisp and golden. Drain on paper towels and season with kosher salt and garlic powder while still hot.

10. Plate the fish and fries on individual plates (I like to use those red plastic deli baskets lined with waxed paper). Serve with tartar sauce and malt vinegar on the side. 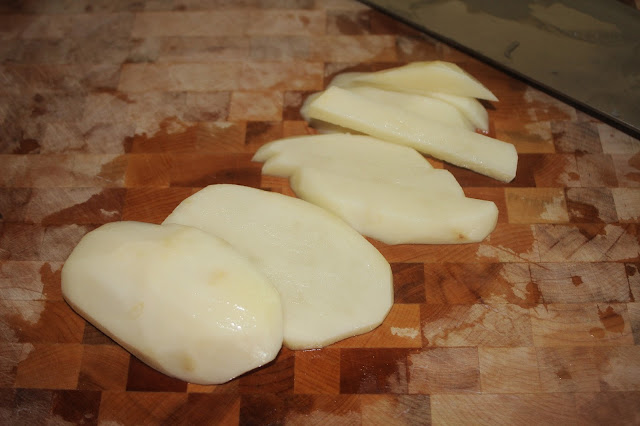 Cut the potatoes into wedges. 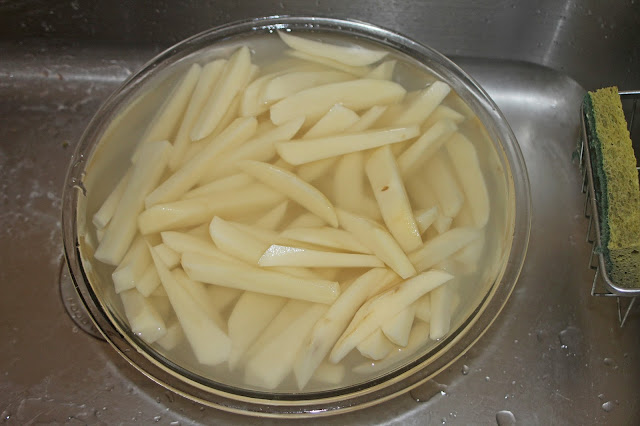 Soak in water to prevent the potatoes from oxidizing and turning brown. 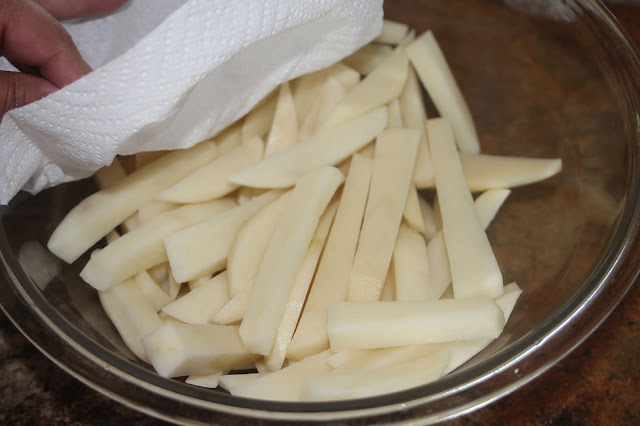 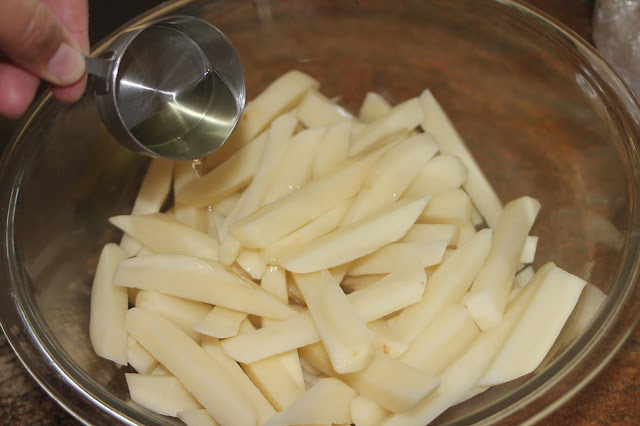 Toss with 1/4 cup oil. Cover with plastic wrap and microwave on high 6 minutes, stirring half way through with a rubber spatula. 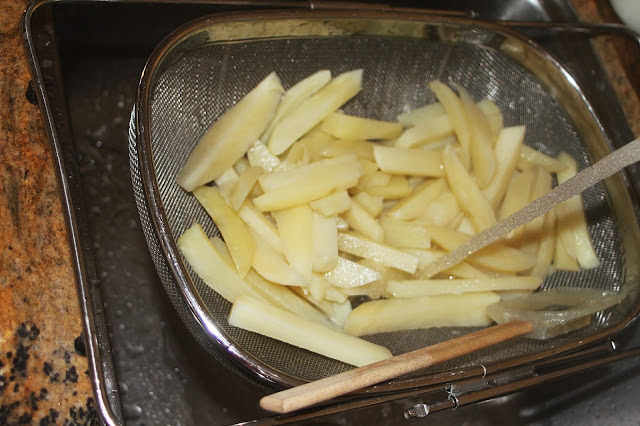 Pour the potatoes into a strainer and rinse with cold water to stop the cooking. 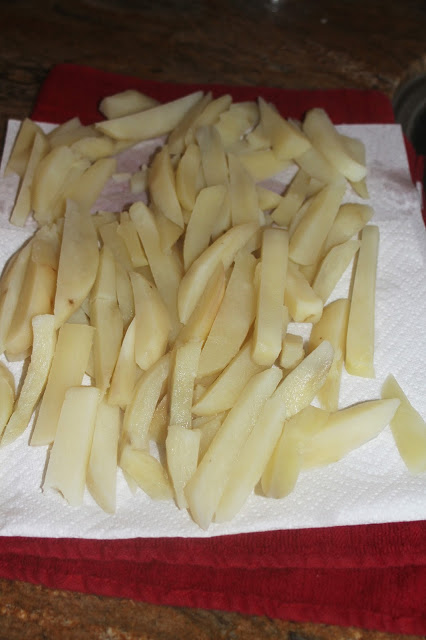 Spread the potatoes on kitchen towels and blot dry with paper towels. Let cool to room temperature, about 1 hour. 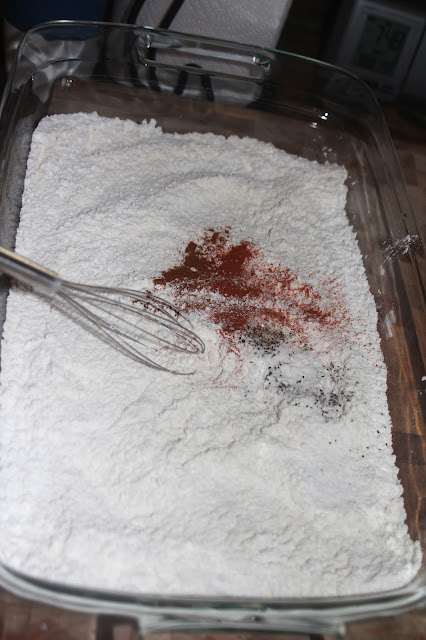 Combine the flour and cornstarch with the seasonings in a bowl. Transfer 3/4 of the mixture to a shallow casserole. 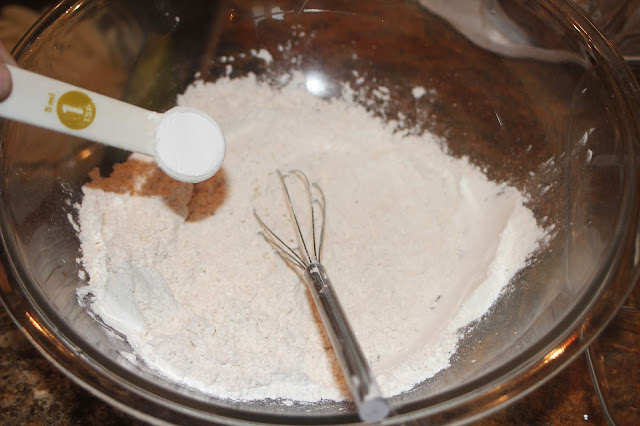 Add 1 tsp. of baking powder to the remaining seasoned flour in the bowl. Set aside. 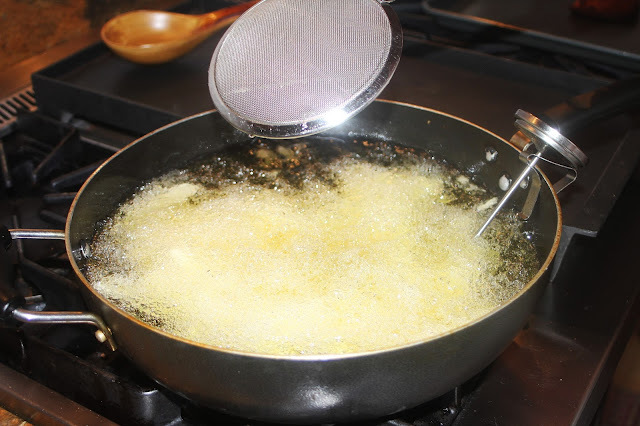 Heat 3 quarts of vegetable oil in a deep skillet or pot over medium high heat to 350F. Add the potato wedges and cook 6-8 minutes until lightly golden. 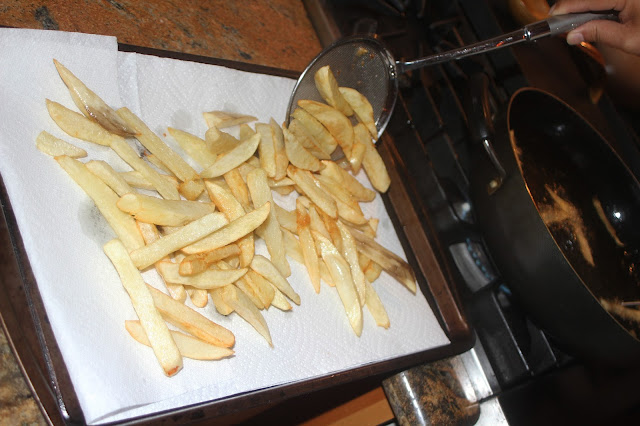 Drain the potatoes on paper towels and set aside. 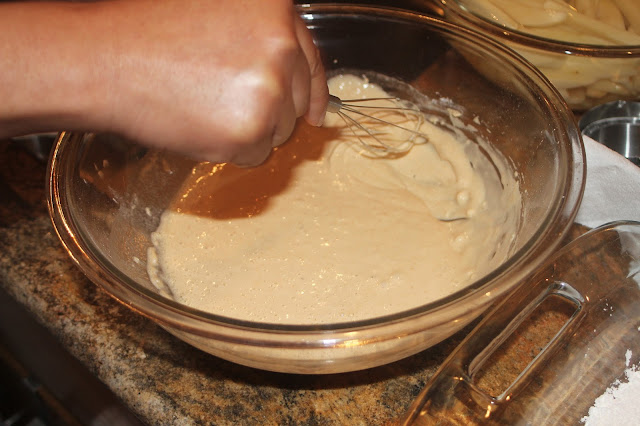 Whisk the beer into the seasoned flour-baking powder mix to make the batter. 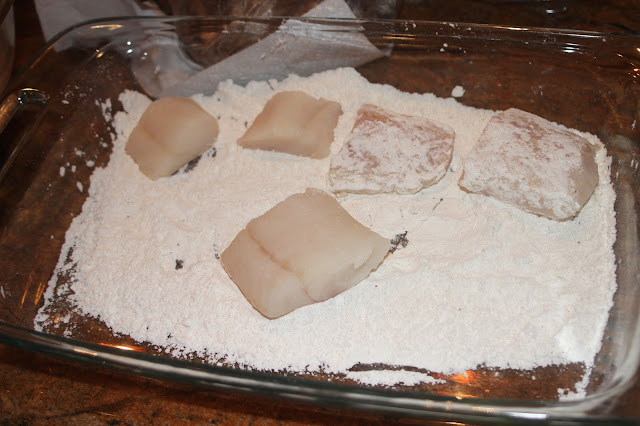 Blot the fish dry with paper towels and dredge on all sides with the seasoned flour in the shallow casserole, shaking off any excess. 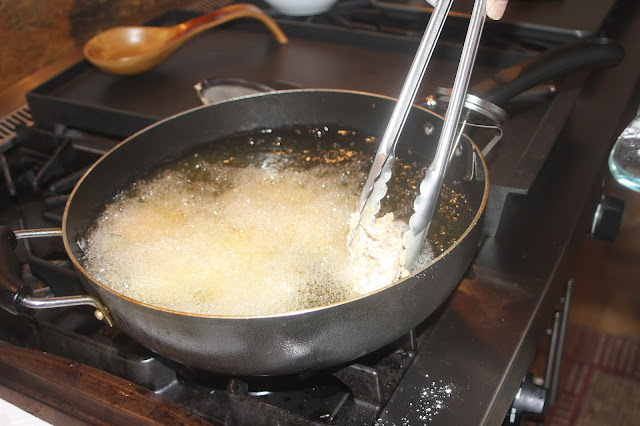 Reheat the oil in the pan over medium high heat until it reaches 375F. 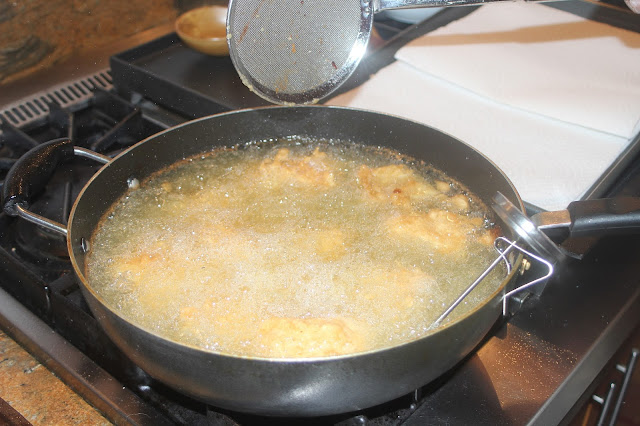 Add the fish and fry 7-8 minutes until golden brown. Cook in batches if needed so as not to overcrowd the pan. 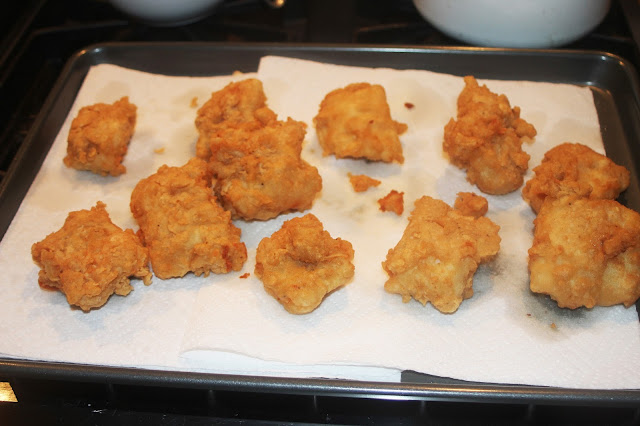 Drain the fish on paper towels. Once all the fish has been fried, bring the heat on the oil back up to 375F and fry the potatoes a second time, around 3-4 minutes until they are nicely golden. 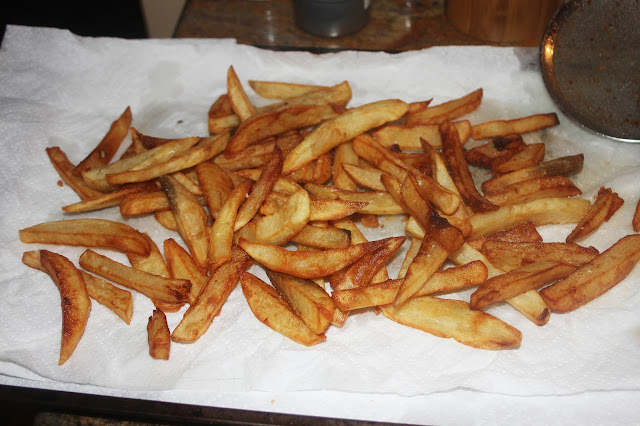 Drain the potatoes on paper towels and season 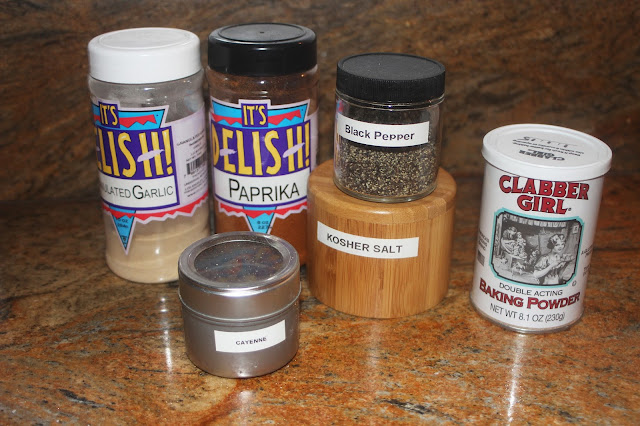 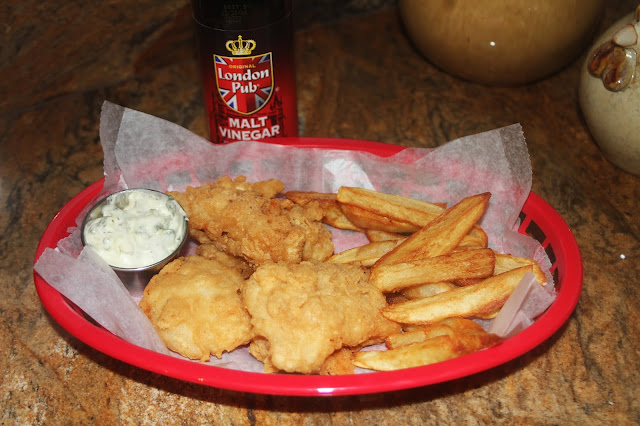 Serve the fish & chips with lime-cilantro tartar sauce and malt vinegar on the side.

Posted by camissonia at 1:50 PM